Who did it, Pope Francis or Cory Booker? A Salon quiz

The recent past has seen rapturous press coverage for two men. Can you tell them apart? 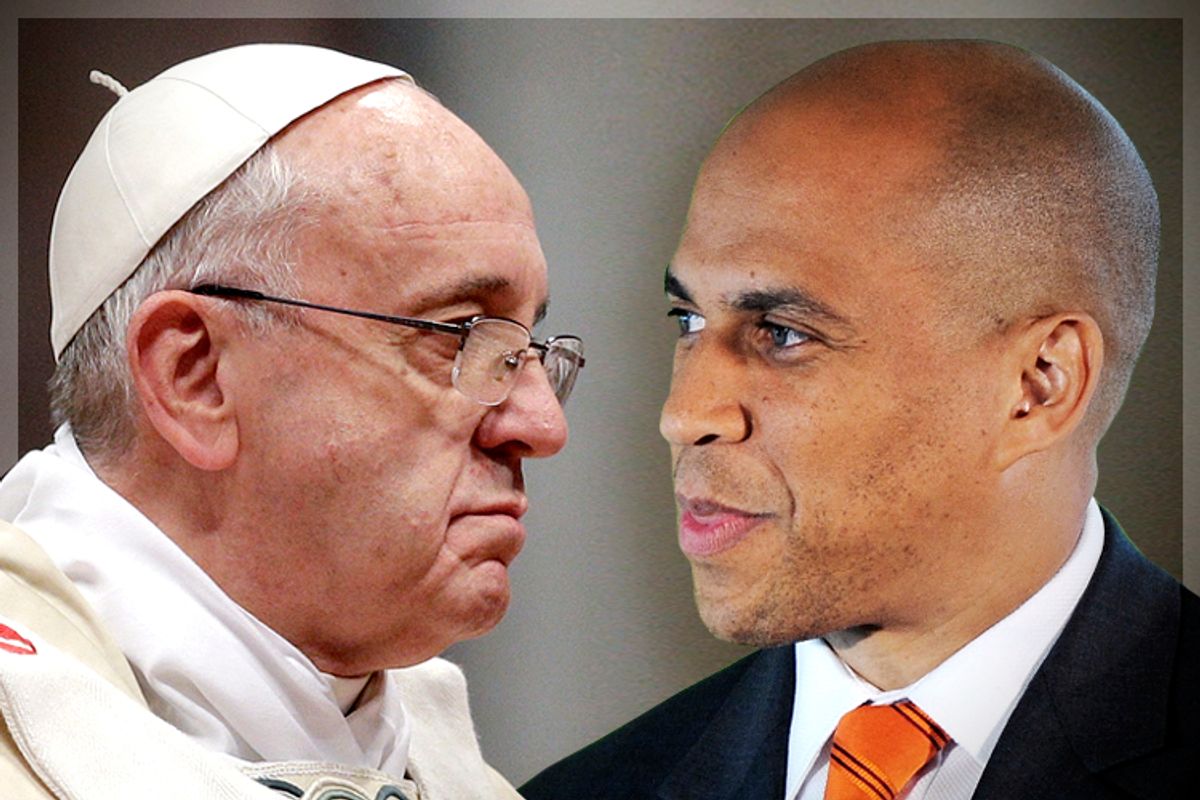 The pope is following in the footsteps of Al Gore and Barack Obama among the political figures to get a loving cover treatment in the rock-and-lefty-politics journal Rolling Stone. The cover story treats Pope Francis as the bellwether for liberalized attitudes among Catholics worldwide and the leader of a movement of compassion. Frankly, we're stunned Cory Booker didn't get the Rolling Stone cover first.

The two men rose to global fame around the same time (though, naturally, the pope's a bit more famous) and in the same manner: harnessing the power of social media, living in and publicizing one's own living in humble circumstances, engaging in face time with one's constituents or parishioners. Both men could be said to be leading a movement -- and both have emphasized the virtue of humility even as they grow more and more renowned.

How well do you know your Cory Booker from your Pope Francis? Below, find 12 citations from the public lives of these famous figures. If you follow the news cycle -- or either man on Twitter -- this shouldn't be too hard. Right?

1. While an American magazine noted that "everyone agreed" this person's "Twitter feed is so great," they raised an objection. "Should he really be spending this much time on Twitter, anyway?"

2. An American news network noted that this person "seemed bullish on the Internet. He certainly hasn't been shy in utilizing it, occasionally angering both conservatives and liberals with his 140-character messages." His take was summarized this way: "The Internet is cool, as long as it leads to good deeds IRL."

3. A lengthy profile of this person noted that he stood out from that to which we're accustomed: "The touchingly enduring 'Mr. Smith Goes to Washington'/'Bulworth'/Aaron Sorkin fantasy in which a noble political figure finally tells the American people the truth tends not to happen in real-life democracy, you may have noticed. There's too much money, too many special interests infecting electoral politics."

4. After helping a [constituent or parishioner], this person humbly said, "I did not feel bravery, I felt terror. It was a very scary moment. I couldn’t breathe. It was a moment I felt very religious."

5. This is what happens when this figure bonds with [constituents or parishioners] in [Newark or Rome]: "A diminutive woman named Maria Bekowski just wanted [this person] to hear her story: her husband had died, the landlord had raised the rent, and now their crêpe business was gone. [The person] moved around the room, listening earnestly to each story, until an aide signalled that it was time to leave. He hugged the crêpe lady, and slipped out the back door of the church."

6. A person this figure famously met and helped hopes that the relationship continues, as one New York newspaper reported: "the encounter means something much more personal. [The civilian] hopes [the famous figure] will call him and arrange a face-to-face chat." The person who received help remarked in print, too, upon the famous figure's "wide and thick" shoes.

7. A person this figure famously met and helped remarked to a New York newspaper: "I’m not too surprised [...] I wouldn’t expect anything less from him, you know, that’s just him."

8. A spokesman announced that this person was planning to remain in simpler lodgings: "I can't make long-term predictions, but for now it seems he is experimenting with this type of simple co-habitation."

9. This figure was defended against critics by a religious-leader friend this way: "The world, my brother, isn't like that. You should be slightly flexible when you hear other voices, instead of just listening and saying, no, here this is the wall. I believe he'll get there, and understand other views. But for now he's still only at the beginning."

10. This figure was defended against critics by a religious-leader friend this way: "The key to understanding [this figure] is his deep spirituality. Few people I know experience God more intuitively and see the spark of the divine in others as manifestly [...] his spirituality has always been most manifest in the dignity he confers on the people he meets."

11. After sending an online message reading, "May we help more than we hurt, may we seek to understand more than be understood and may we love more than we judge," this figure got largely positive replies, except for one reading, "Yes! However, narcissistic personality disorder is the modern day plague - seductive, self-centered, focused, and compartmentalized."

12. This figure told an interviewer: "I don't like the word narcissism. it indicates an excessive love for oneself and this is not good. [...] The real trouble is that those most affected by this - which is actually a kind of mental disorder -- are people who have a lot of power. Often bosses are narcissists."

And the answers are: