McCarthy had help: How big business snuffs out political dissent 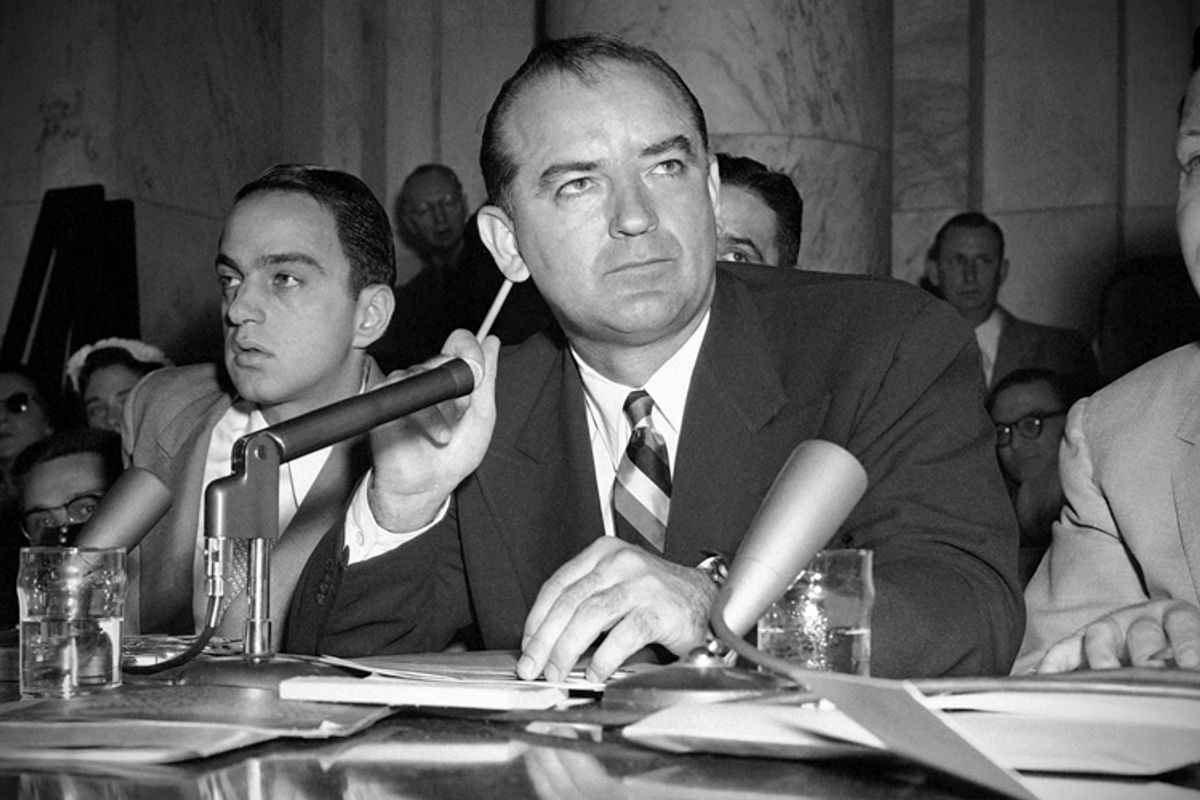 Pete Seeger’s death has prompted several reminiscences about his 1955 appearance before the House Committee on Un-American Activities (HUAC). And for good reason. Two good reasons, in fact.

So Seeger invoked the First Amendment instead. A far riskier legal position—the Court had already held, in the case of the Hollywood Ten, that the First Amendment did not protect men and women who refused to testify before HUAC—it was the more principled stance. As Seeger explained later, “The Fifth means they can’t ask me, the First means they can’t ask anybody.” And he paid for it. Cited for contempt of Congress, he was indicted, convicted, and sentenced to a year in prison. Eventually the sentence got overturned.

Second, not only did Seeger refuse to answer questions about his associations and beliefs, but he also did it with great panache. When asked by HUAC to name names, he refused—and then almost immediately offered to sing songs instead. Much to the consternation of the Committee chair, Francis Walters, Seeger followed up with a more personal offer.

I know many beautiful songs from your home county, Carbon, and Monroe, and I hitchhiked through there and stayed in the homes of miners.

Parenthetically, I should note that Seeger’s hearings were not the only such circus of absurdity.  If you want to treat yourself to an afternoon of giggles, check outAyn Rand’s testimony, where she insisted that no one in Russia ever smiled. Or this wondrous exchange between Zero Mostel and two members of HUAC.

While Seeger’s HUAC appearance, and its legal aftermath, is making the rounds of his eulogists, it’s important to remember that HUAC was probably not the most difficult of his tribulations during the McCarthy era. Far more toxic for most leftists was the blacklist itself. From the early 1950s to the mid-1960s (the dates are fuzzy, and it depends on which particular medium we’re talking about), Seeger was prevented from performing on a great many stages and venues. First with The Weavers, and then on his own.

The blacklist did not work independently of the state. It was the transmission belt of the state, both a feeder to, and an enforcement mechanism of, the government. Men and women who didn’t cooperate with the government were subject to the blacklist, so it was a useful means of securing cooperation and providing information. The secret enforcers of the blacklist were often ex-FBI men or ex-HUAC staffers, and the FBI and HUAC supplied critical information to industry executives and their underlings. Who then used it for either political or narrower self-interested purposes.

That said, the blacklist, and the more general specter of private penalties, touched more people than did HUAC or the state. For most men and women during the McCarthy years, the immediate point of contact with political repression and coercion was their employer, their teacher, their therapist, their lawyer, their supervisor, their co-worker.

And that raises a larger question. It is easy today to look back on that time, to read the transcripts and case histories, and tut-tut at all the nastiness or laugh at all the foolishness of the blacklist. With everyone from President Obama to the New York Times delivering warm encomia for Seeger, we forget that the blacklist only worked because so many people like President Obama, like the editors of the New York Times—who refused during the McCarthy years to hire anyone who was a member of the Communist Party—worked together to make it work.

To be sure, there were many hard-right ideologues behind the blacklist: the writers at Red Channels, an anticommunist handbook that named names in the entertainment industry, were conservative propagandists of the first order,anatomized to brilliant effect by a young researcher by the name of Michael Harrington.

But the blacklist would never have had the reach it did—not merely in Hollywood or the academy, but throughout virtually every industry in the United States—had it not attracted a wide range of men and women to its cause. The blacklist was also the work of liberal pamphleteers, executives in the culture industries, influential politicians in and around the Democratic Party, and most prominent of all, J. Edgar Hoover, about whom Arthur Schlesinger wrote:

All Americans must bear in mind J. Edgar Hoover’s warning that counter-espionage is no field for amateurs. We need the best professional counterespionage agency we can get to protect our national security.

Far from being the object of liberal derision that he is today, Hoover was, in his time, thought to be the consummate rational bureaucrat, a professional of the first order who needed, said the liberals, more money, more resources, more power, not less. As Hubert Humphrey declared:

If the FBI does not have enough trained manpower to do this job, then, for goodness sake, let us give the FBI the necessary funds for recruiting the manpower it needs….This is a job that must be done by experts.

For liberals, Hoover, the ultimate impresario of the blacklist, was someone to collaborate with, not contend against.

The blacklist, as Victor Navasky reminded us long ago, was the triumphant realization of a perverse version of Adam Smith’s Invisible Hand. Everyone pursued their own private or personal definition of the good; the result was cooperation, exchange—and coercion. What’s most striking about the blacklist is just how diversely inspired, and collaborative, its various protagonists were. Some were hardcore anticommunist true believers. Others were cold calculators of the bottom line. Some were patriots, others careerists, and still others cowards. There were liberals, conservatives, socialists, ex-communists, atheists, Catholics, libertarians, Jews.

Most amazingly, these differences didn’t matter. Despite what virtually every modern political theorist—from Hobbes to Montesquieu to Madison—maintains, pluralism and diversity did not lead to liberty, anarchy, or disorder. Instead, they provided more avenues and opportunities for collusion, collaboration, and coercion.

Beyond the collusion and collaboration, there’s another dimension of the blacklist worth mentioning: the intense and dense infrastructure of support, at the lowest levels, that made the machine go. When we think about political repression, we tend to focus on elites, officials on high, industry executives, and the like. But the blacklist was the work of hundreds of thousands of men and women, operating at the middling and lower tiers of institutions and organizations.

In some way, we could say that the blacklist is the dark answer to Bertolt Brecht’s poem “Questions from a Worker Who Reads.” Long invoked by the left as a tribute to the anonymous laboring heroes of history, the poem can also be read as a more unsettling account of the invisible but necessary labor that goes into the production of political crimes like aggressive war or imperial conquest.

Who built Thebes of the 7 gates?
In the books you will read the names of kings.
Did the kings haul up the lumps of rock?

And Babylon, many times demolished,
Who raised it up so many times?

In what houses of gold glittering Lima did its builders live?
Where, the evening that the Great Wall of China was finished, did the masons go?

Great Rome is full of triumphal arches.
Who erected them?

Over whom did the Caesars triumph?
Had Byzantium, much praised in song, only palaces for its inhabitants?

Even in fabled Atlantis, the night that the ocean engulfed it,
The drowning still cried out for their slaves.

The young Alexander conquered India.
Was he alone?

Caesar defeated the Gauls.
Did he not even have a cook with him?

Philip of Spain wept when his armada went down.
Was he the only one to weep?

Frederick the 2nd won the 7 Years War.
Who else won it?

Every page a victory.
Who cooked the feast for the victors?

Every 10 years a great man.
Who paid the bill?

“Did he not even have a cook with him?” That question is often with me. Not just in the context of the blacklist, but in other, far more terrible circumstances. Like genocide.

This past weekend I watched “Conspiracy” on Youtube. It’s a BBC reenactment of the 1942 Wannsee Conference, at which various officials (many now forgotten) of the Nazi regime gathered to draw up plans for the deportation and mass murder of the Jews. The opening sequence of the film—in which the house staff at the villa on the Wannsee scramble to prepare for the arrival of regime’s elite—does a brilliant job of answering Brecht’s question. Yes, there were cooks at Wannsee. Lots of them. And maids, waiters, butlers, secretaries, transcriptionists, drivers: an entire army of support staff helping to make the conference go off without a hitch. Eichmann, who organized the logistics of the conference, comes off less as an architect of mass murder than as an anxious host of a dinner party, the Martha Stewart of the Shoah.

Hart Crane marveled at the Brooklyn Bridge: “How could mere toil align thy choiring strings!” And like the Brooklyn Bridge, large-scale enterprises like genocide or the blacklist—needless to say, I am in no way equating these phenomena—entail the aligning of choiring strings. Not only through spectacular mobilization of the masses or ideological indoctrination from on high but also through the most mundane and individual calculations of career.

Political crime is work. Whether the crime is mass murder or persecution, someone has to do that work. And to help the people who do that work. So men and women must be hired and paid, supervised and promoted.

At the height of European imperialism, Disraeli wrote, “The East is a career.” So was the Holocaust. So was the blacklist.

While we rightly recall today the heroism of Pete Seeger in refusing to make the blacklist a career—indeed, sacrificing his career in order to unmake the blacklist—we have to ask ourselves how many of us would have chosen the path he did. Particularly in the United States, where the obligations of career are nearly the first item on our list of civic duties.