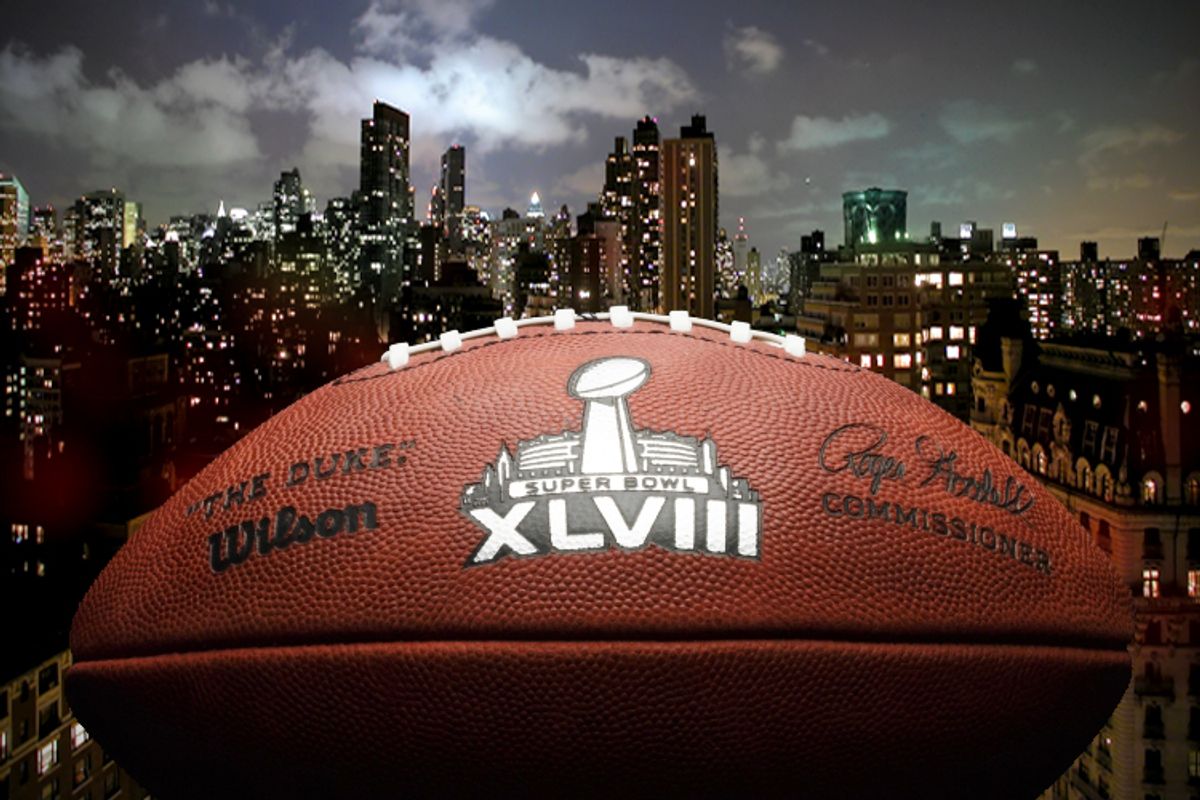 There are a few things I have come to expect during the Super Bowl: some maybe-OK commercials, an overwrought halftime show, superior programming on Animal Planet, and sex trafficking hysteria. On the last count, Sunday’s game has already delivered my expectations.

The media is spinning the usual yarn about how massive sporting events create dollar signs in the eyes of prostitutes, pimps and sex traffickers, all of whom allegedly flock to the host city in slavering hordes. Local officials are assuring the media that they have trained everyone from police officers to cab drivers to spot trafficked women during the game. Yesterday, Rep. Chris Smith told a House subcommittee, "We know from the past, any sports venue — especially the Super Bowl — acts as a sex-trafficking magnet."

It's just not true -- and even anti-trafficking activists will tell you this.

Take a 2011 report from the Global Alliance Against Traffic in Women, which surveyed the available data and concluded, "There is no evidence that large sporting events cause an increase in trafficking for prostitution." That statement is pretty much the exact opposite of Rep. Smith's -- and guess which claim is backed by actual research. The report lists a number of reasons that a Super Bowl trafficking boom makes no sense, including that fact that "short-term events are not likely to be profitable for traffickers or sex workers" and that, oh by the way, "large sporting events are not only attended by men." (Also, as the report suggests, consider the frequent estimation, which has never been borne out, that the Super Bowl will bring as many as 100,000 sex workers into town. Now compare that to the number of people who visit the game each year: 150,000 to 200,000.)

Want some hard numbers? Sure, I can do that. Let's look at what we've learned -- or rather clearly haven't -- from the aftermath of the last handful of Super Bowls: In the wake of the 2008 game in Phoenix, police Sgt. Tommy Thompson said, "We may have had certain precincts that were going gangbusters looking for prostitutes, but they were picking up your everyday street prostitutes. They didn't notice any sort of glitch in the number of prostitution arrests leading up to the Super Bowl." With the following Super Bowls in Tampa and Miami, officials also saw no increase in prostitution arrests.

From there, the number of prostitution-related arrests goes up, but the trafficking numbers remain minute. In 2011, during the Dallas Super Bowl, 59 people were arrested for crimes relating to prostitution, 46 of whom were locally based sex workers; and only two of those arrests involved trafficking. (Before the big event it was estimated that it would bring in as many as 38,000 trafficked girls.) In 2012, Indiana saw 68 prostitution-related arrests, two of which were confirmed to involve human trafficking. Last year’s game in New Orleans saw the arrest of 85 people, two of whom received trafficking charges.

You might wonder: Why does this story line persist, then? The GAATW report proposes a couple of explanations: It's an effective fundraising strategy, it gets media attention and it's "a more socially acceptable guise for prostitution abolitionist agendas" -- meaning the aim to do away with all sex work, including the adult, consensual kind -- "and anti- immigration agendas. " The report goes on to argue that the Super Bowl myth wastes "needed resources," misrepresents the real issues and leads to "increased criminal penalties and human rights violations against sex workers." Not only is there no compelling evidence of a Super Bowl-related trafficking boom, but suggesting otherwise could undermine anti-trafficking aims.