You're being lied to about Afghanistan: The terrorists there include us

When we treat civilians as collateral damage, no wonder Hamid Karzai trusts us as little as the U.S. trusts him 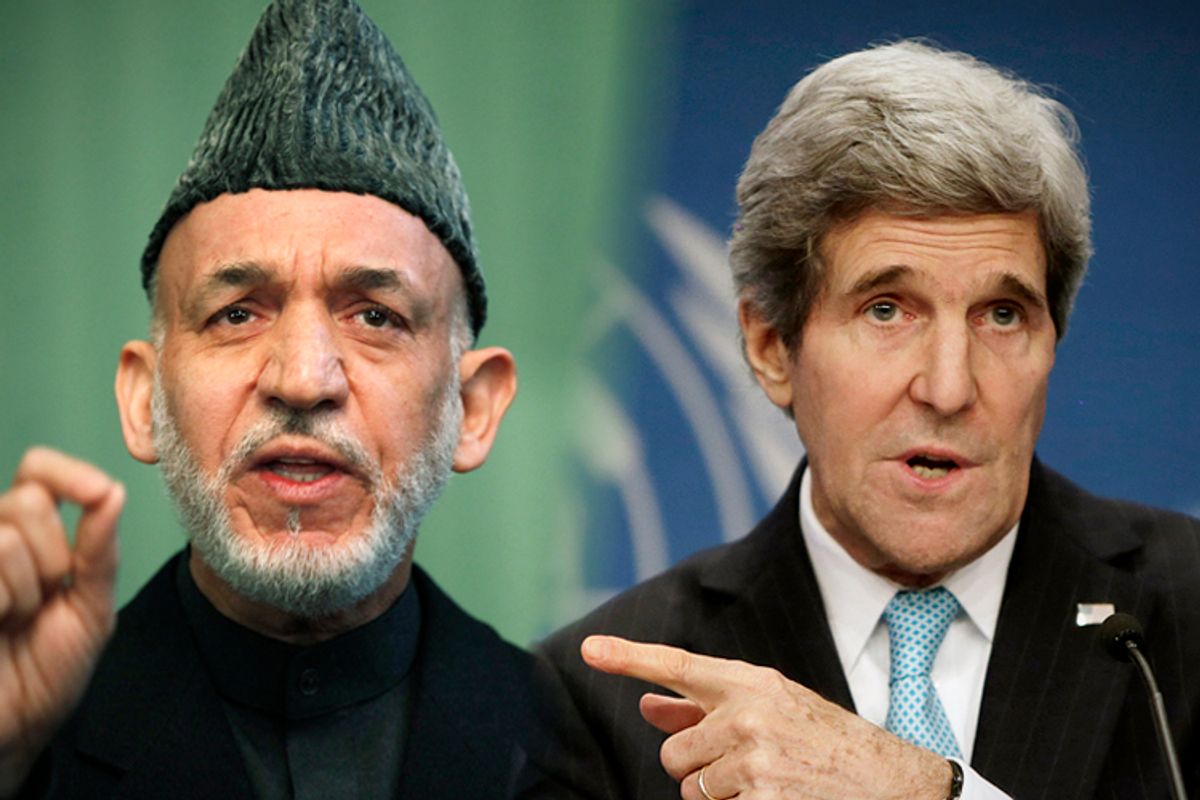 Some readers may recall the joke that went around when George W. Bush launched Operation Enduring Freedom in Afghanistan shortly after the Sept. 11 attacks in 2001. To prolong the tradition, it starts to look as if Hamid Karzai has endured the American presence in his country just about to his limit.

The Obama administration, which is to say the defense and intelligence establishments, is not getting its way with the Afghan leader these days. This is serious for a couple of reasons. One, it is our defense and intelligence teams that run U.S. foreign policy now — instruments of policy are now setting policy, tail wagging dog. The State Department’s role in the apparently eternal “war on terror” has devolved to limiting the very worst excesses — and then dissembling the best it can when the very worst comes to be. Which is usually.

Two, the war in Afghanistan and its silly name are to pass into history sometime this year, one way or another. And the end may be as ignoble as it is now proving in Iraq. Yet more American families will look at the framed photographs of their fallen and ask, “For what, exactly?”

Karzai warned Americans about this question long ago. “Military action in the country will ... not deliver the shared goal of eliminating terrorism,” he said to the U.N. General Assembly in 2006. Let us keep this sound observation in mind as we interpret what amounts to a latter-day rebellion by the single most important client on Washington’s long list of them. It is an aid to understanding what we are not, in our media, encouraged to understand.

Here is what the Afghan leader has been serving up for the Obama administration of late.

* Karzai rejects a security pact with Washington that was negotiated (Washington’s official term) last year. The deal would leave behind 15,000 soldiers, almost all American, to train and advise the Afghan army once foreign troops are withdrawn. The Pentagon would also station some — we are not told how many — special forces to continue the “counterterrorism” mission and (big one, this) maintain drone bases on Afghan soil. “Afghanistan will absolutely not accept or sign anything under pressure,” Karzai said at a press conference in Kabul last Saturday. His line: I will sign when peace talks with the Taliban convene and include the U.S. and Pakistan.

* Last week Karzai issued orders to release 37 detainees from Bagram, the infamous prison the Americans set up near their main air base early in the 2001 invasion. Make that 37 more: Karzai has freed 650 prisoners since taking over Bagram not quite a year ago and is not done yet. At that presser in Kabul last Saturday he termed the prison a “Taliban-making factory” and added, “God willing, I will close Bagram.”

* Karzai has long complained about the civilian casualties of airstrikes and ground attacks on Afghan communities suspected of harboring Islamic militants. (He complains about the incessant coverups, too.) Last week he made public a photographic record of a Jan. 15 attack on a village north of Kabul, advancing it as evidence of 12 to 17 deaths resulting from eight hours of bombing and then house-to-house raids. The American casualty count, so far as we have one, is two. And it turns out that the dossier Karzai presented was carelessly assembled. It included images in the public domain long before the attack took place.

The latest on all this arrived Tuesday from Kevin Sieff, the Washington Post’s man in Kabul. Karzai, it seems, has been gathering a long list of “insurgent-style attacks” he suspects (apparently without evidence) Americans of perpetrating. These include the bombing of a Kabul restaurant two weeks ago, an incident that took 21 lives.

It is a weird thought, certainly. But not so weird as all that. Bombings and mayhem are straight out of the Allen Dulles playbook when he was running the CIA in the 1950s and all manner of people like Karzai were one way or another troublesome. Unlikely in the Kabul case, yes. Reason to deny history (which correspondent Sieff entirely ignores)? No, it is not.

The Americans are furious with Karzai, needless to say — furious to desperate. A month ago, Secretary of State Kerry asserted that if Karzai refused to sign the new security pact, well, then, we can get Defense Minister Bismullah Khan Mohammadi to sign it — he will do. There is a right way and wrong way to treat a client, Mr. Secretary, and you have the touch but not the judgment.

I hold no candle for Karzai. He got on the CIA’s payroll during the Soviet occupation in the 1980s and had aides and relatives who were taking checks as recently as last year. Corruption and nepotism are self-evident problems. He argues for democracy but governs in monarchic fashion. He is with the Americans, against the Americans, then with again; against the Taliban but stands not so far on some questions. He hates the poppy-seed economy but one cannot tell how many degrees of separation there are between the presidential palace and the crops.

There is just one thing. The thread binding Karzai’s many and wily ways at things is plain if you look for it. He is very Afghan. And for this he deserves credit. He is not the puppet Americans thought they bought and, until now, thought they owned.

He is right on the security pact because he is right to cast the American presence as a primary source of terror among Afghans. It may be that he is simply holding out for a better deal, as some thinkers in Washington suggest, but I doubt it. How can one possibly condemn a population to the presence among them of drones and immune-from-judgment special forces until 2024 and thereafter?

He is right about Bagram, too. The Pentagon is beside itself over the prisoner releases, but only the naive and the faux-patriots can any longer take the American military’s word as to who a detainee is or is not. This is simply reality. Karzai is committed to ridding Afghanistan and the region of terrorism (from any source), no one can doubt that. But his way at it is to stop the violence and bring all forces into the tent. Washington, having done much to give rise to the Taliban, will not now talk to them. But that is Washington’s problem. Refusing to talk to people is yesterday’s method. Ask the Iranians.

Final point here: Yes, close Bagram, Mr. President. It will make you look good by way of Obama and Guantánamo, where dozens of detainees, identified as innocent, languish.

Karzai is into localism. This means starting where you are with what you have and making what can be made of it. Tribal identity, village identity, the mosque as the only organized institution in the village, the monarchic bit, taking counsel from the loya jirga and projecting power back through it — these are Afghanistan’s starting blocks. Far more coherent than the imposed democracy — sorry, “democracy” — of Bush, Condi Rice and the “nation-building” set.

As to the corruption, political favors and family enrichment, there is not much to say. They are always regrettable, rarely absent in the political systems of emerging nations, and never of much concern to Washington, which is customarily a source of corruption, not a good answer to it.

The thing to watch now is whether Karzai goes it alone. Pentagon people are talking about “the zero option” — leaving Afghanistan altogether this year — but it is hard to say where the bluff starts and ends. Karzai would lose billions were he to persist in refusing the security pact, given that American assistance never comes free. In that case, I hope he recalls Sukarno’s great comeback when the Americans were biting his ankles. “Go to hell with your foreign aid!” he barked at the American ambassador in late-1964. It is a sophisticated position if you can afford it.

Now, about those photographs exposed as unrelated to the Jan. 15 bombing and the alleged infantry raid that followed. (The Americans deny the latter took place.) I refuse to take the bait and get distracted. The New York Times cites American defense and intel people as outraged at this deception. With this, we read, Karzai has “crossed a line that deeply troubles Western officials.” In an instant the question morphs before our eyes.

Wake me when this is over, please. Before you do, ask yourself: Are you all that interested to find Kabul does not have a top-drawer propaganda department? I am not. Good enough if it did, as there would be less occasion to confuse us and Kabul could compete in the majors with Washington, but this is not the issue. The issue is the nobody-will-tell-us number of innocent Afghans that Americans are murdering and shrugging off as “collateral damage.” Karzai’s point on this is undented. “Deeply troubled."

Something I am deeply troubled about, to conclude. American soldiers and pilots are fighting a war, and some count of civilian Afghans are going to make the greatest sacrifice for it. No more to it. No terror in the villages. When the other side fights back, claiming their own innocent victims while hitting American soldiers, there is terror in the villages, they are criminals, and they must stand trial.

Cannot register this. Maybe it is just me.