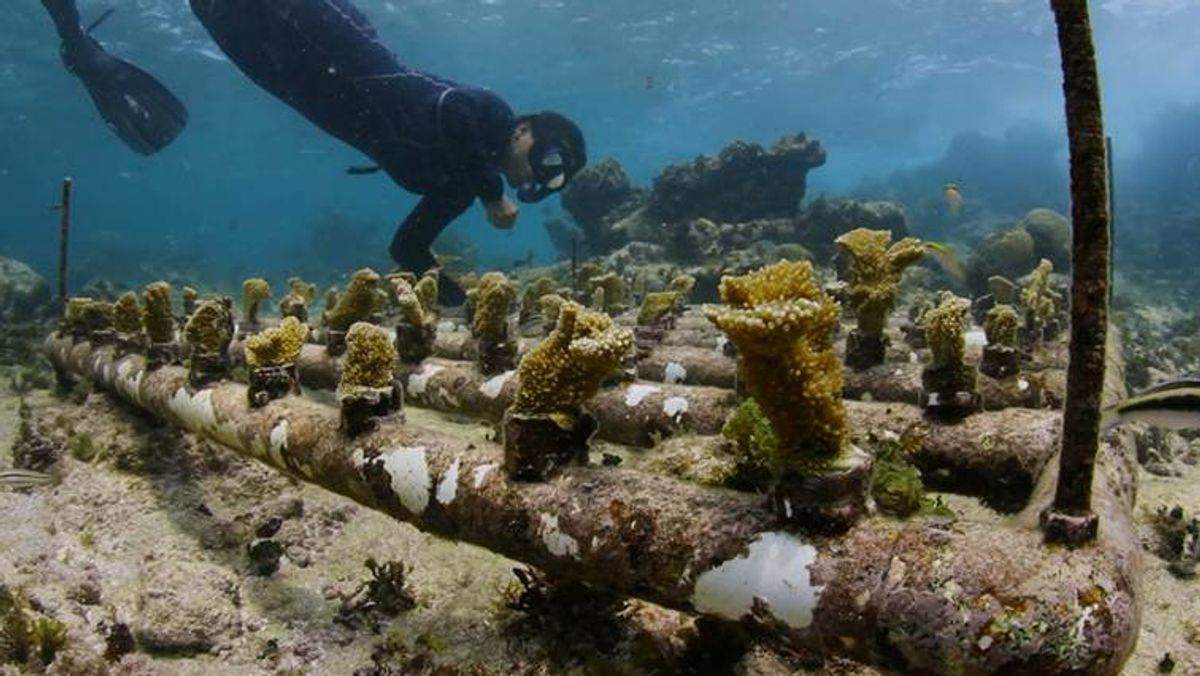 MAR Fellow Gaby Nava inspects one of her coral nurseries on one of the MesoAmerican reefs in Mexico. (Çapkin van Alphen, CauseCentric Productions)
--

Celine Cousteau loves sharing travel stories. The granddaughter of famed explorer Jacques, Celine has the ocean in her blood. If you let her, she'll wax poetic on research excursions, travel camera equipment and the value of listening to the people you meet along the journey. But, in discussing her work as founder and CEO of CauseCentric Productions, an organization that enables grassroots conservation projects by sharing their stories via film, she can hardly stop chatting about the outside projects she's stumbled upon long enough to fully explain her own.

As someone who has always admired local conservation efforts and those who work seemingly endlessly to back them, I was able to sit down for a few minutes between Celine's trips to find out what we should know about modern conservation.

Celine, you have family history of being infatuated with the natural world. Was there a particular moment when you knew that this would also be your path or passion in life?

The realization that working with the environment was in my future was not one that happened in a moment of sudden realization but rather an accumulation of evidence. From the family I grew up in to my own nature of appreciating the outdoors and other cultures, I built the path that brought me here. With my undergraduate studies in Psychology and my graduate studies in Intercultural Relations, I bought my own interest in the human species into what was an already growing library of work with the environment. This is why I am most interested in the human story within the natural world.

Is there a part of the world that you feel is most greatly in need of conservation assistance?

Ever since I went to the Amazon for the first time as a 9 year old child, I have had a connection with that place. The more I learn about it and the more I experience through regular visits, the more I strive to help protect not just this place, but most importantly the tribes that live in the Amazon. Meeting scientists who have ben doing research in the area I am also convinced that our human livelihood is in part dependent on the healthy future of the Amazon, for water, oxygen, and the root of many of our medicine. So then, how would you compare the conversations happening around conservation in the United States with what's happening there and further abroad, and is there one country or region that pays particular attention to their conservation efforts?

Each place and culture has it's sensitivities and focus. Whether it is the US or European countries we can see a lot of international efforts being made to solve issues of hunger, health, or to support conservation strategies. But the way in which support is given also varies and should not be underestimated. For those who can't give money, volunteer time is valuable and welcome.

Rather than provide information solely based on my own experience of charitable donations, I'll provide research published by the World Giving Index that helps answer this question, and a report.

Celine, you run your conservation efforts as a business. Have you found any problems in this field because of your gender, or have you similarly run into any eco orgs run by women who may have problems securing funding or other needs?

To this day I haven't felt that being a woman running my organization has been a problem. This has sometimes been a bonus in the field as I am given access to places in an indigenous village that men would not be permitted to go. The women I have met who run non-profits have all been professional and efficient- so why should their gender be seen as a downfall?

What strikes me most about your travel stories is your eagerness to tell the tales of those local organizations who are doing so much with so little. With CauseCentric, it seems like your primary aim is to draw attention to the people doing work on the ground. Of these orgs, which are the ones that we haven't heard of, but should know?

Anyone highlighted on the CauseCentric website are all impressive grassroots organizations. Here are a few projects I would like to highlight:

The MesoAmerican Reef Leadership Program is a comprehensive capacity building initiative working with conservationists and marine biologists along the coast of the Mesoamerican reef in Central America. Supported by Contiki Vacations, for whom I am a spokesperson, this organization is truly deserving of attention. In particular, we were so impressed by the work of one of their fellows, Gabriela Nava, that we decided to support her work in addition to continuing support of MAR Leadership. Watch the films CauseCentric and Contiki produced about MAR and Gaby.

This is not a small movement but it certainly deserves increasing attention: Girl Rising

Which conservation issues are most important to you? Tell us below in the comments.