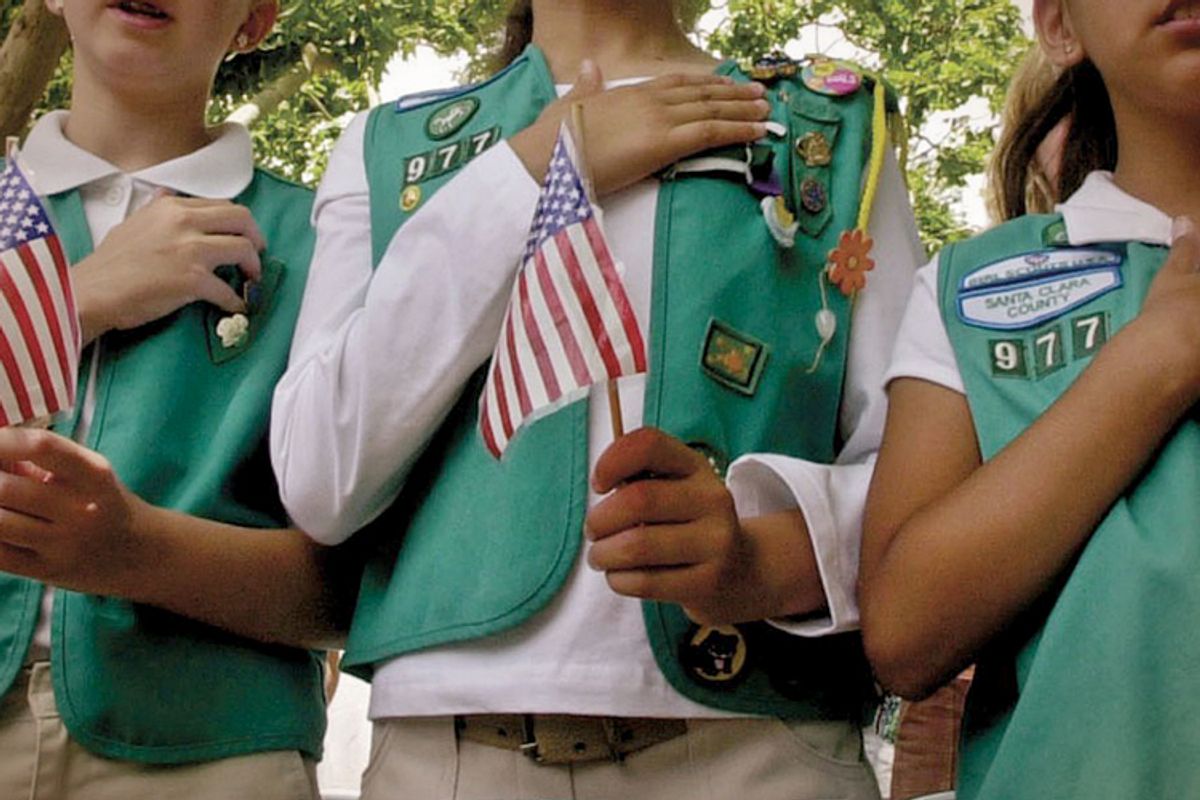 First, the frothing conservatives declared war on Halloween. Then, they declared war on the imagined war on Christmas. Now, in what is rapidly becoming a new seasonal tradition, the right is going after those cookie brandishing kids in green. It's time again for the war on Girl Scouts.

In recent weeks, as cookie season has reached its annual pitch, anti choice groups have been busy calling the GUSA affiliated with "a distinctly un-holy vision of sexual empowerment secured by contraception and abortion," and calling for boycotts. The Catholic News Agency this month declared Girl Scouts’ relationship with WAGGGS, the World Association of Girl Guides and Girl Scouts, "troubling," depicting WAGGGS as "an international agitator for abortion, contraceptives, sexual diversity and 'comprehensive' sexuality education." Why? Because representatives from WAGGGs were part of a 2010 World Youth Conference that wrote a statement asking for global cooperation on ending poverty, guaranteeing the right to education and "reproductive health services… including access to a full range of contraceptives and safe abortion." It also supported gender equality, including recognition for LGBT individuals "as part of the spectrum of gender and sexual identities." So a group the Scouts is affiliated with is affiliated with a larger group that made a statement about maternal health and gender equality. Yup, this totally means your daughters will be getting Try It badges in abortion.

The Scouts also found itself in hot water recently for simply tweeting HuffPo's list of "Incredible Ladies Who Should Be Women Of The Year For 2013" and asking "Is there anyone you'd add to this list?" Though activist Malala Yousafzai dominated the list, it also included Wendy Davis. That's all. Last month, GUSA similarly linked on Facebook to a Washington Post story on American Women Who Made a Difference in 2013, including Gabby Giffords, Robin Roberts and Kathleen Sebelius. By pointing out lists of high-achieving women -- including women who advocate for women's health and rights -- clearly, GUSA was pushing an abortion agenda. Breitbart went particularly apoplectic over the incidents, with a story declaring this week that "A part of every Thin Mint and Do-Si-Do, every Samoa and Savannah Smile goes to support abortion advocacy." Delicious, peanut buttery abortion advocacy.

Sadly, so intimidated was the GUSA organization that it issued its "sincerest apologies" this week, saying, "While our intentions were good, many of our followers and the public at large raised concerns about the content they were driven to via our social channels. We listened, and would like to take a moment to sincerely apologize to anyone we have offended."

This whipped-up outrage is an annual event. Two years ago, Indiana State Rep. Bob Morris called the Scouts "a tactical arm of Planned Parenthood" promoting "feminists, lesbians or Communists." And three years ago, sisters and former Scouts Sydney and Tess Volanski launched a blog to document the GUSA's "pro-abortion mindset" – and gained support from the Family Research Council and Right to Life organizations.

The truth, for anyone sentient enough to look at the GUSA's own FAQ, is that the organization "does not take a position or develop materials" regarding birth control or abortion.  Troops may have conversations about health or sexuality, but information is not an "agenda." It's true, however, that unlike the more contentious Boy Scouts organization, the Girl Scouts "do not discriminate or recruit on the basis of race, religion, ethnicity, sexual orientation, socioeconomic status, national origin, or physical or developmental disability." That's right, they won't discriminate against you – even if you're gay or transgender. And if you're the kind of person who's bothered by that, well, then maybe you're not Scout material.

The word "bullying" is tossed around so promiscuously these days it's lost much of its impact, but in this case, it applies perfectly. It is bullying to expect an organization that serves girls around the world to be 100% in line with your own conservative values, or even more insanely, to never even have any associations with global organizations that are not 100% in line with your conservative values. It is bullying to insist that an organization that doesn’t discriminate against people based on their sexual orientation change its ways.

For the record, I'm a reproductive-rights-defending cranky feminist, and I can attest that neither of my daughters have ever gleaned even the slightest political agenda from their participation in the Scouts.  My younger daughter is currently working toward her embroidery badge. She's not in training to "aggressively promote special LGBT rights." She may, however, be in danger of one day launching her own Etsy shop.

The lessons imparted through Girl Scouts are of strength and service and honesty. To be a Girl Scout means not just to peddle sugary wares once a year or to sing campfire songs, but to learn how to work together and make positive change in the world. Scouting is about girls being strong and getting things done. No wonder it scares the crap out of some people. No wonder it's so important.