Pick of the week: The Oscar-nominated shorts you have to see

A dying murderer makes his peace, a woman escapes her abuser and Martin Freeman meets God in the year's best shorts 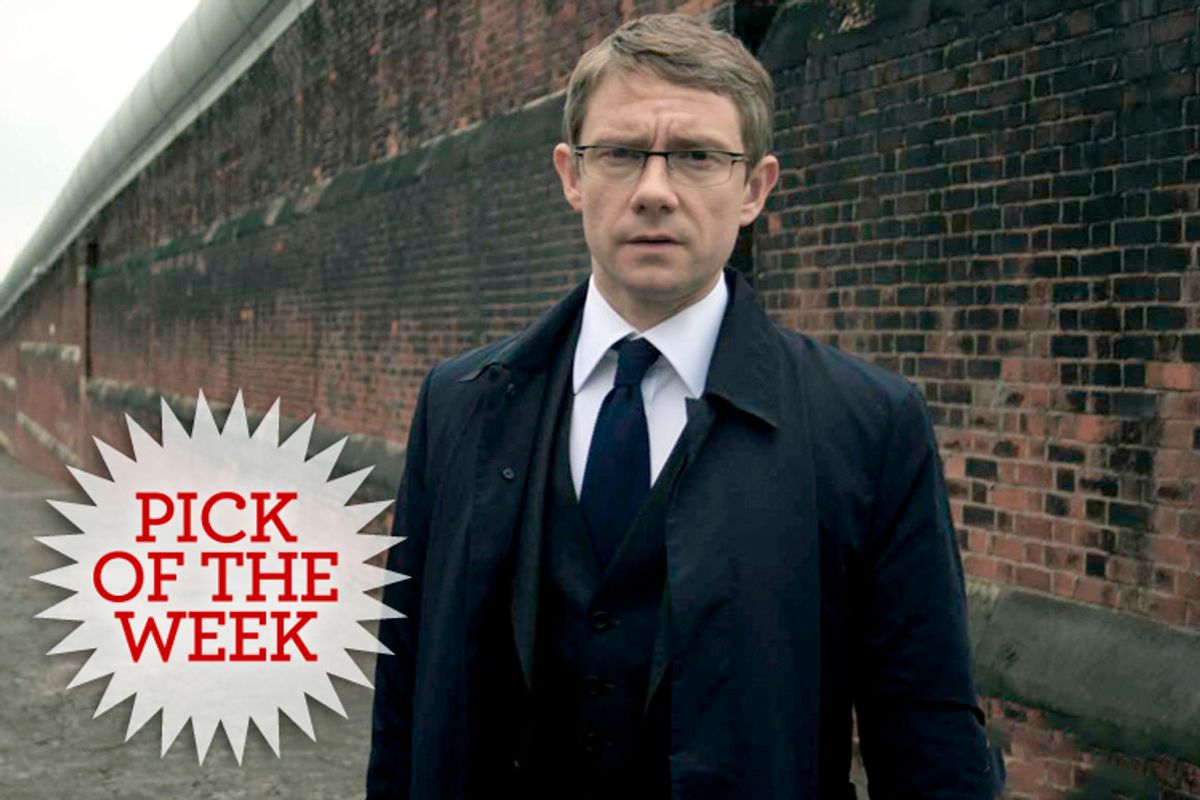 Martin Freeman in "The Voorman Problem"
--

This week I took a hayride with Mickey Mouse, endured a hair-raising escape from an abusive husband, watched demonstrators shot on the street by government thugs in the Yemeni capital, and was hushed and humbled by spending time with a dying man who had done terrible things. And all those things happened in movies that lasted less than 40 minutes. As cynical as I may be about the immense and largely idiotic machinery of the Oscars, the annual release of the year’s Oscar-nominated short films — which reach theaters this week, and VOD on Feb. 25 — has become a highlight of my movie year.

Almost every noteworthy film director makes what used to be called “short subjects,” either on their own or in film school, before moving on to feature-length movies. Once upon a time, the big problem with shorts was that there was little or no way to see them if you weren’t connected to the film industry. OK, if you planned ahead and went to the local film festival in your town — assuming your town had one — you might get to see five or six, but that was about it. The Oscars would give out awards to the people who made shorts every year and all around the world you could hear the sound of people on their sofas, scratching themselves and saying, “Huh. If only there were a way to see those things!”

Well, the more things change the more they stay the same, and the equation has gone from almost no supply to way too much. You could grow old and die watching short films on YouTube and other streaming services, provided you can even find things one would want to call “films” amid the wilderness of cats riding vacuum cleaners and toddlers dancing “Gangnam Style.” From the moment broadband Internet service started to make streaming video accessible to the masses, there has been murmuring in film circles about a new golden age for short films. Distribution is no longer a problem (if you’re not trying to make money), and digital technology has reduced the cost of production to a few pennies on the celluloid dollar. What’s missing, of course, is curatorship, precisely the factor that makes the Oscar shorts such a big event.

Can I guarantee that these 15 shorts — five each in live-action, animation and documentary — are the best examples of the form produced in 2013? Of course not. Outside the animation category (which has its own quirks) the academy studiously avoids anything that feels too oblique or unconventional; it strongly favors well-crafted and emotionally satisfying work that feels like preparation for award-winning features of the future. But the fact that dedicated committees of conscientious human beings who know a lot about how movies are made weeded through hundreds and hundreds of submissions and picked their favorites, even if they might not be your favorites or mine, is something to be grateful for.

Furthermore, what I saw this week included a riveting family thriller I’m guessing will stick with me longer than 90 percent of the movies I watch this year, a one-note joke that’s exquisitely executed, a shattering documentary that doesn’t need to be a second longer than it is, a portrait of an irreplaceable American eccentric, and a study of healing and forgiveness that feels like the basis for a better, longer film. I won’t even pretend to review all 15 films, and if it feels like I’m giving short shrift to the animation category, I suppose I am. It isn’t my core area of interest or expertise in the first place, and I don’t think the academy has a good record on animation. You can feel its members struggling, year after year, to strike an uneasy balance between hand-drawn Euro-wistfulness, cutting-edge digital cuteness and Disney.

Oh, but hey: Disney! If the best film in the animated selection might be Japanese director Shuhei Morita’s goblin-fueled “Possessions,” I had a better time watching “Get a Horse!,” which is the first Mickey Mouse animated short in almost 20 years and sets a new high-water mark for Disney postmodernism. (If you took your kids to see “Frozen” in the theater, you probably saw this already.) Mickey takes a hayride with his animal friends, in a scratchy, black-and-white, square-format cartoon that convincingly mimics the style of the 1930s — and actually features snippets of the voice of Walt Disney as the Mickster. And then … well, the film is only seven minutes long and I shouldn’t spoil it for you, but let’s just say that the latter portion is in digitally rendered color 3-D, Mickey’s pal Horace Horsecollar wanders into the audience and comes back with a smartphone, and archvillain Peg-Leg Pete is victimized by Mickey’s apparent ability to bend the laws of physics. Tremendous fun!

In the live-action category, “Hobbit” star Martin Freeman and British TV star Tom Hollander deliver a delicious little two-hander called “The Voorman Problem,” about a prison psychiatrist interviewing a troublesome inmate who claims to be a god, one who created our universe and everything in it just nine days ago. Voorman informs Freeman’s shrink that he can uncreate anything in that universe at will — say, the nation of Belgium. (That’s your cue: “The nation of what?”)

I’d skip “That Wasn’t Me,” a melodramatic, manipulative tale about an encounter between two Spanish aid workers and an African child soldier whose good intentions border on condescension. That’s the one film in this year’s group that really doesn’t belong. It’s more than made up for by French actor-turned-director Xavier Legrand’s “Just Before Losing Everything,” which opens as a quiet, atmospheric rural thriller and ends, less than half an hour later, with a deep-focus shot of a footrace across a supermarket parking lot and the entire audience on the edge of its seat. This story of a battered wife (the marvelous Léa Drucker) who brings her kids to work in a last-ditch effort to escape their abusive dad could perhaps be lengthened into a feature; we learn almost nothing about this couple and their past history. But it’s also perfect the way it is, as a tightly structured and utterly convincing thriller with not a second wasted.

When Magnolia Pictures and the ShortsHD cable channel started bringing the Oscar shorts program to theaters in the mid-2000s, they initially left out the documentaries. That might have made sense in the days when Oscar-nominated documentaries were always about schoolchildren learning valuable lessons, violinists touring war zones or the process of making artisanal cheese. This year, as for the past several, every nominated documentary short is well worth seeing. I’m not even going to be a sourpuss about the likely winner, Malcolm Clarke’s “The Lady in Number 6,” an irresistible portrait of a 109-year-old pianist that hits the documentary daily double, or even trifecta: It’s about classical music, it’s about growing old and it’s about the Holocaust.

I suspect the one truly great film in this category — and, along with “Just Before Losing Everything,” the 2013 short you shouldn’t miss — is Edgar Barens’ “Prison Terminal: The Last Days of Private Jack Hall,” which will also reach HBO on March 31. Hall was an 82-year-old convicted murderer, as well as a decorated World War II combat veteran and former POW, who allowed Barens to film his final illness in the hospice unit of the Iowa State Penitentiary. There’s no flinching away from the complicated and painful truth in this film, or in the haggard, haunted Hall himself. He’s a former violent drunk and racist, with eight ex-wives, who was turned in by his own son after committing murder, and ends up dying literally in the arms of an African-American fellow inmate, a volunteer who ministers to dying men in the hospice unit. A reverent and shattering experience, made with immense compassion and without an atom of dishonesty.

Jason Cohen’s documentary “Facing Fear” is nearly as moving, but much more fragmentary: It tells the story of two men, one a former Nazi skinhead and one a former gay teen hustler, who meet as adults and realize they’d met before, many years earlier: When Tim, the Nazi skin, viciously beat up Matt, the teen hustler, and left him for dead on the streets of Hollywood. Tim’s journey toward a heartfelt apology, and Matt’s toward forgiveness, feel a bit truncated in a movie this short, and I expect (and hope) that Cohen can better tell the story of both men, and their unlikely friendship, in a longer film.

“Karama Has No Walls,” a film entirely in Arabic credited to the Emirati director Sara Ishaq, is like a disturbing corollary to Jehane Noujaim’s Oscar-nominated documentary feature “The Square,” which was made in Cairo. A terrifying, you-are-there assemblage of footage shot on the streets of Sanaa, Yemen, during the Arab Spring protests of 2011, “Karama Has No Walls” is an urgent, stereotype-exploding historical document, and the one film in this year’s group that could only belong to this moment. This film is upsetting and not easy to watch; one of the young men who shot this film was actually killed when government-sponsored thugs began firing on the protesters. But for this first-person account made by activist Arab youth to get this far with academy voters shows us how much has changed.

One could argue that Jeffrey Karoff’s “Cavedigger” is a more familiar variety of Oscar fare, essentially a portrait of an unrecognized outsider-art genius. Maybe I was riding a high from all the other powerful docs in this category, but I felt like the story of Ra Paulette, an environmental sculptor in his late 60s who carves elaborate, Art Deco-influenced caves into the sandstone hills of northern New Mexico, actually went deeper than that. (Yes, his name is Ra Paulette. He used to be a garbage collector in Taos.) I mean, first of all, you have to see these caves to believe them; they're like a bizarre combination of H.P. Lovecraft, Frank Lloyd Wright and late-Victorian kitsch. Partly a social portrait of an isolated, New Agey corner of America and partly the story of a loner with no interest in money or fame who follows nothing but his own exceedingly peculiar muse, “Cavedigger” delighted me, nettled me and left me hanging. Individuality is still possible in our violent and troubled world, but where does it get you?

The Oscar Nominated Short Films 2014 opens this week in many cities, with wide national release to follow. (Documentaries, live-action and animated films are separate programs.) All films will be available on-demand from cable providers, DirecTV, Amazon and iTunes, beginning Feb. 25.