When you want exciting reinterpretations of the Fab Four's hits, here's your playlist 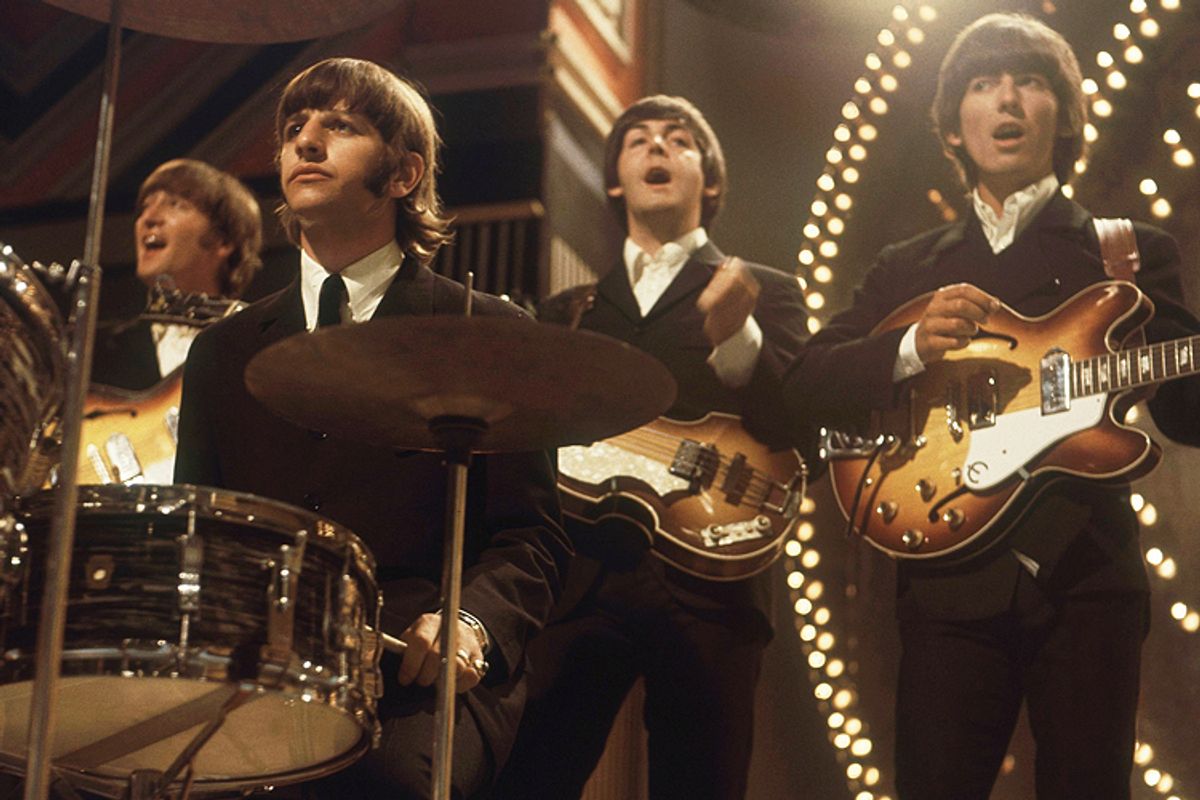 Due to massive popularity, critical bona fides and more massive popularity, the Beatles are probably the most covered rock band ever. If the Beatles fell out of bed and jangled a nearby guitar, you can pretty much bet that there is a Britpop, a rock, a soul and a country cover of that random jangle. Both Wikipedia and the Covers Project have lists that can give you some sense of the extent to which everyone and their mother and their poodle is out there covering the Beatles. But it doesn't take long poking around YouTube to figure out that even these exercises in obsessive uber-completeness are the tip of an enormous iceberg. So, I won't say that the songs below are the 30 best Beatles covers, because I don't think anyone has listened to, or even could listen to, all the Beatles covers. These are the best ones I could find, though.

Neanderthal garage rocker Link Wray takes a smiling, happy early Beatles single, clubs it with an ax, and splits it open to reveal the grease and switchblades in its interior.

Daniel Johnston, "I Saw Her Standing There"

Wray turns cheer to menace; Daniel Johnston goes the other way around and replaces Paul's lascivious Little-Richard "oooo" with naif vulnerability. Robbed of every iota of aggressiveness, the song actually becomes creepier; the big beat of teen consummation sliding toward a barren, looming twee.

Amy Winehouse, "All My Loving"

There are some dreadful soul/jazz versions of Lennon-McCartney — Sarah Vaughan's Beatles tribute is worse than you'd think anything by Sarah Vaughan could possibly be. This one is great, though; replacing the band with a simple guitar backing gives Winehouse's voice room to sell the song. Which it does.

Esther Phillips, "And I Love Him"

Paul sounds a little stiff and a little saccharine on the original, but Phillips rectifies those lapses, singing with such grace that her confidence sounds like wisdom rather than a jingle. The Beatles admired her version enough to bring her out to perform in England.

Philips' Beatles cover benefits from its restraint, but excess isn't always a bad thing. Yes buries the simple tune of "Every Little Thing" under ridiculous prog arrangements as the song's celebratory hopes for eternal happiness lurch gloriously toward self-parody and squiggly keyboards.

Redding's "Day Tripper" is one of my all-time favorite performances of anything ever, but since I already put it on a list a couple weeks back, I figured I'd embed his also quite wonderful live performance of "A Hard Day's Night." Unlike the Beatles, he actually does sound like he's putting his back into it; so exhausted by his own soul workout that he's got to let the band finish some of his lines for him.

Jeff Beck mashes up a funk strut, stinging blues licks, and a voice box to turn the Beatle tune into mismatched easy-listening fusion. Definitely one of those tracks where you can hear the performer thinking loudly, "Yeeeeaaaah, man." But hey, the Beatles were hippies too.

Stevie Wonder, "We Can Work It Out"

Dionne Warwick has a nice version of this, but Wonder's still seems like the definitive take. He grabs the lyrics with such authority that even their awkward doofiness seems commanding. But if you can make a harmonica sound that right, getting through "there's no time for fussing and fighting my friend" must seem like a cinch.

The Beatles have become such repackaged and recycled products at this point that YMO's reimagining of "Day Tripper" as ersatz electronic muzak almost seems more the real thing than the original. She's a big animatronic tease, that mannequin.

Karen Carpenter's voice wrings every bit of longing out of "Ticket to Ride" and leaves it to shiver picturesquely on the winter landscape. Meanwhile the band with all their instruments grin as if rejoicing in her pain and Richard looks past her like a be-sweatered zombie. Terrifying camp. (Their live version of "Help!" is also worth a look.)

Paul's smirking parable about fame and favors is a natural fit for New York art hipsters. Village Voice writer Cristina's breathy come-on cozies up to lounge, flirts with disco, and bats its eyes at jazz and no wave -- but irony, beautiful irony, is always her first love. Not sure who the stiff male singer is, but he's got a good evil villain laugh.

Steve Earle, "I'm Looking Through You"

The Beatles loved their Carl Perkins, and their songs often work surprisingly well with a country twang. Earle's laid-back rendition is a case in point; the groove feels good and mean, and that Southern drawl works better for sneering than the Liverpool accent.  YouTube's got a nice, even more bluegrassy live version available too.

Cowboy Junkies, "Run for Your Life"

Another mean-spirited number, with Margo Timmins breathing menace and the rest of her band dumping grisly feedback on their blues. John repudiated his version of the song on the reasonable grounds that threatening your romantic partner for breaking up with you is not cool, but the Junkies don't seem to have any such second thoughts.

The B-52s recorded this for a car commercial; the dancers are boogying to the original Beatles song, which some clever YouTube user has repurposed. The juxtaposition works in part because this is a fairly faithful version, though the New Wave touches and the female harmonies make it just off enough that you can hear afresh how great that riff is.

George Harrison's "Taxman" has one of the Beatles' absolutely toughest guitar lines, and Black Oak Arkansas runs with it. Jim Mangrum accesses the crazed wooly American anti-tax id in a way that wealthy Europeans can only dream of. If this isn't in constant rotation at Tea Party rallies, it should be.

Danielle Dax was being a goth pop art genius before Lady Gaga had ever even heard of a meat dress.  "Tomorrow Never Knows" works startlingly well as a dance tune; though Dax maintains enough psych touches to keep an avant edge.

Beach Boys, "With a Little Help From My Friends"

Not to take anything away from Ringo's fuddy-duddy music-hall charisma, but the Beach Boys' version has a poetry the original barely even hints at (to say nothing of Joe Cocker's bloated, bizarrely overrated cover version). As the boys plunk along in a sunny/sad aphasia, it's hard to believe this wasn't a Brian Wilson song to begin with.

William Shatner, "Lucy in the Sky With Diamonds"

Not only is this the greatest Beatles cover ever, it may be the single greatest vocal performance in the history of explored space. The only real competition is Shatner's equally unhinged version of "Mr. Tambourine Man." And … yeah. There's not really anything else to say.

This track may be the Dust Brothers' absolute masterpiece, in no small part because of the mélange of Beatles sampling. A more or less complete list  of what they use is here, but the heart of the awesomeness is the drum/guitar lift from "Sgt Pepper's Lonely Heart's Club Band," a snippet of brutal funk that I don't think I ever really noticed until "Sounds of Science" bashed me over the head with it. Covers don't have to make you appreciate the original more, but it's a lovely thing when they do.

Residents, "Hey Jude/Sympathy for the Devil"

As I mentioned in a list last week, I hate "Sympathy for the Devil." It and "Hey Jude" are both nadirs in the careers of their respective legendary performers; unwieldy and embarrassing exercises in ego and would-be profound threat or profound uplift, as the case may be. Glomming them together and slowing them down into somnolent nightmare self-parody is so brilliant, though, that it just about justifies both songs' existence.

Lowell Fulsom, "Why Don't We Do It in the Road"

Lowell Fulsom's dirty guitar roughs up Paul's slightly desperate utopian flower-child vision of eros and makes it sound much more like a practical blueprint for action. There's no doubt that the guitarist knows which end of a single-entendre to grab hold of, and where to put it.

I was hoping there'd be a full-bore metal version of "Helter Skelter" out there by someone like Slayer or Deicide. But extreme metal (not unexpectedly) seems to be the one genre too uptight to cover the Beatles. The closest I turned up were versions by White Zombie and Motley Crue which were fine, but demonstrated again the great truth that hair metal isn't metal. Still, if my dreams of death, thrash and doom have been dashed, this Zep mashup is a pretty great second best. You don't get heavier than the hammer of the gods.

Damon and Naomi, "While My Guitar Gently Weeps"

As I've mentioned before this is one of my least favorite Beatles' songs (yes, even worse than "Hey Jude") — thus my affection for Marc Ribot's snotty desecration. Desite my skepticism, though, I still can't resist Damon and Naomi's reverent version. I'm a sucker for chill, spaced-out psych folk, I'll admit it.

Who has the right to cover it if not the man himself? This version sounds much like the original, except for Yoko screaming and yodeling and squawking like that eagle John says is picking at his eyes, all while she carefully refers to some papers so she can be sure to scream at just the exact glass-scraping register.

Fats Domino, "Everybody's Got Something to Hide Except for Me and My Monkey"

This doesn't seem like it could possibly be a good idea, but Domino pulls it off, turning spiky proto-metal into his patented New Orleans roll. When he draws out that "eeeeaaaasssyyyy," It feels better than it should — which is, after all, what the song's warning you about.

I was going to embed the Breeders' excellent cover.  But then I stumbled on this multi-tracked a cappella version, dissonant and weird and uncomfortably cute, all perfectly in the spirit of the original. The tooted coda with jazz hands and casual exit is punk enough to give Kathleen Hanna shivers. Willson has a number of other videos up, though, alas, even she can't quite salvage "Yesterday."

Charlotte Dada, "Don't Let Me Down"

Ghanian highlife performer Charlotte Dada treats "Don't Let Me Down" as a nodding soul groove, pausing now and then for a few bars of stop-time a cappella. The title says this came out in 1971, which would have been only a year or two after the Beatles original.

German producer Frank Farian and Jamaican-born singers Liz Mitchell and Marcia Barrett team up to create what may well be the only rock steady disco cover of the Beatles in existence. John and Paul's parting love letter to each other seems like an oddly personal choice for a cover version, but Mitchell and Barrett enjoy the lyrics, turning male bonding into an ode to sisterhood. With spectacular hats.

Ike and Tina Turner, "Get Back"

The original version is (like more than one Beatle track) a study in ambivalence, Billy Preston's stone soul piano solo contrasting with Paul's more than a little tongue-in-cheek vocals so that it's not clear where anyone, or anything, is supposed to belong. Tina Turner tosses such subtleties aside; when she says "get back" there's no question that she means it. And who's going to be the one to refuse Tina Turner?