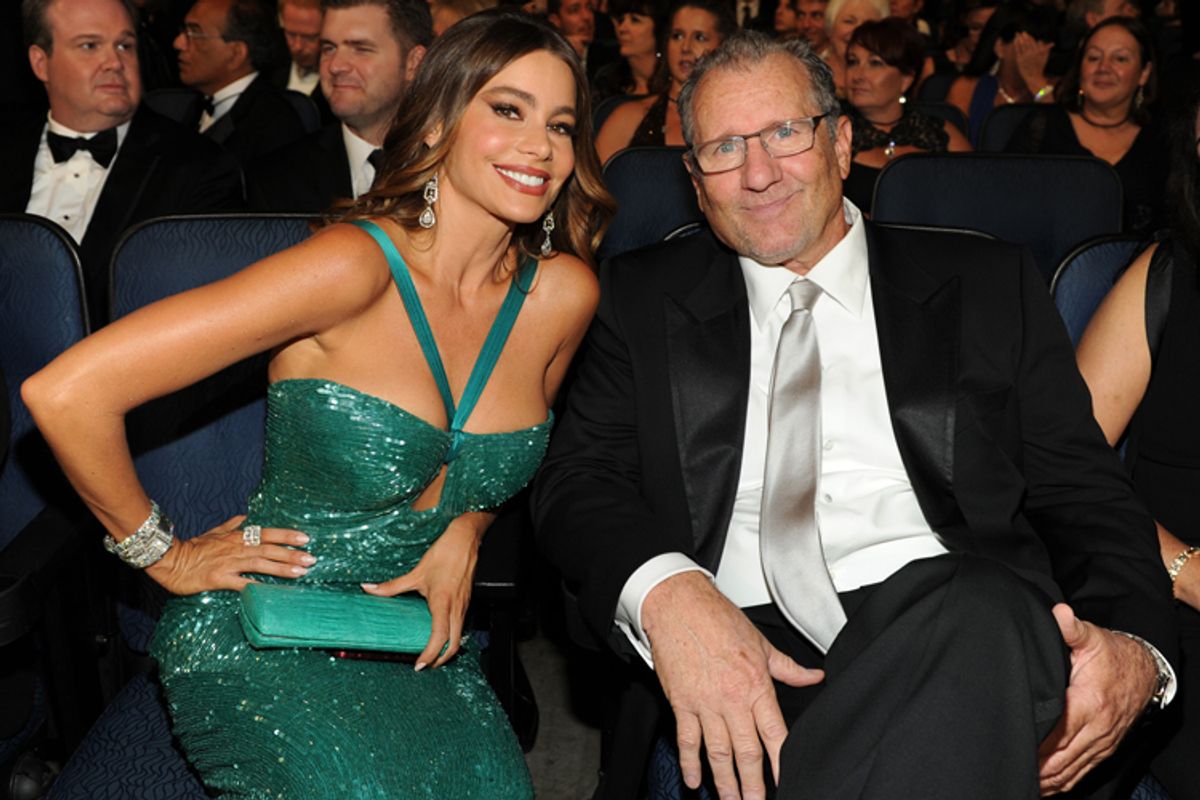 If you were to believe your television, you'd think all Latinas are immaculately dressed spitfires or docile maids. When it comes to Latino people—especially women—it's as if the TV got stuck in the 1950s.

While these identities are not in themselves wrong or harmful, the problem lies in the fact that these are the only portrayals people are exposed to. Some of us actually like hoop-earrings and tight-fitting leopard-print skirts. Some of us are hardworking maids. Some of us are highly educated. Some of us are sexually assertive. Some of us don't like sex at all. Like everyone else, we're human beings with myriad complex experiences, desires and identities.

Some may argue that it's only TV, so why make such a fuss? A report from from the Hispanic Media Coalition, "The Impact of Media Stereotypes on Opinions and Attitudes Towards Latinos," found that “the most commonly held Latino stereotypes run parallel to those reflected in the media.” When participants were asked to recall the kinds of roles they see Latinos play in television and film, their top three answers were criminal or gang member, gardener or landscaper and maid or housekeeper. Inevitably, exposure to these kinds of roles will influence real life.

The report also found that although non-Latinos, for the most part, report having regular interaction with Latinos (44 percent on a daily basis), and being familiar with Latino culture (74 percent say they are somewhat or very familiar), only 30 percent say they personally know many Latinos (27 percent know two or fewer). More than a third (38 percent) interact with Latinos once a month.

Impressionable people, those lacking critical-thinking skills and those who don't have any Latino friends are susceptible to these misconceptions. These expectations are not only irritating, they are dehumanizing and exhausting. I mean, how can all women from 21 countries, including the United States, all have the same sexual identities? Let's stop thinking in binaries, people.

Here are the six most common misconceptions Latinas are tired of dealing with.

1. We're exotic. What amuses me about this one is it sounds as if we're rare jungle creatures. I once had a fellow ask me where I was from because I had a "very exotic nose.” (By the way, I'm from Chicago and my nose is my damn nose!) Kat Lazo, a Colombian and Peruvian feminist media activist, shared with me her experience of being the only Latina in her white neighborhood. She says the boys thought of her as “something foreign.” The worst pickup line she's ever heard? “You're the most exotic flower I've ever seen.” Whoa.

According to the 2011 U.S. Census Bureau population estimates, roughly 52 million Hispanics live in the United States, representing approximately 16.7 percent of the U.S. total population. That makes people of Hispanic origin the nation's largest ethnic or race minority. The U.S. Hispanic population for July 1, 2050 is estimated to reach 132.8 million, constituting approximately 30 percent of the U.S. population. How exotic are we, really? Does "exotic" simply mean non-white because white is the default? Fellas, don't ever, ever use that word to refer to anyone. Seriously.

2. We're hypersexual. Because we come from such hot exotic climes, Latinas and black women (please note that some Latinas are also black) are expected to want sex around the clock. Doesn't matter when or where, we just can't help ourselves! Lifetime's "Devious Maids" has been justifiably eviscerated left and right for that very reason. The way they managed to cram so many stereotypes into one show nearly makes my head explode. Dior Vargas, a Latina feminist activist, has seen this expectation play out in her professional life. In a previous job, she was the only Latina on her team. When all the men she worked with began hitting on her, she felt it was because they assumed she was promiscuous. She says it's even worse for her sister. “My sister is darker-skinned and men assume that she sleeps around and is more sexual,” she says.

Unfortunately, this pigeon-hole doesn't only affect the way others perceive us, it also influences the way we view ourselves. Even knowing that these portrayals are ridiculous, some of us may also fall into the trap. The media is that powerful. Not only that, what if you choose to be sexually assertive but then have that stifling stereotype always hovering over you? “Is that a part of me because I assumed that's how I'm supposed to be?” Vargas wonders. This mistaken belief can really mess with our psyches, so please let's all just let it die. We're all biologically the same, so Latinas obviously don't have a higher propensity for sex.

3. We're submissive. If we're not fiery vixens trying to have sex with everyone in our path, then we must be docile and God-fearing asexual women. Latinas are becoming more educated and empowered than ever, yet this stereotype is still prevalent. According to a 2012 report, Latinas earned three out of every five associate or bachelor’s degrees granted to the Latino population in 2010. According to the 2011 census survey conducted by the Pew Hispanic Center, 17 percent of Latinas (ages 25-29) have at least a bachelor’s degree, compared with 10 percent of Latino males. Why is it then that the late Lupe Ontiveros had to play a maid more than 150 times? "Playing the maid is survival for me," she said. "I'll do the maid as long as you pay." Why do women still have to make this choice?

Part of the submissive stereotype is the idea that we're all pious Catholic girls who are either afraid of sex or willing to serve men's needs. But guess what? We're losing our religion. Over the last five years, Hispanics have become less likely to identify as Catholic. Though some have converted to Protestantism, some heathens like me and many women I know are not religious at all. Not only that, some women who are still practicing Catholics don't buy into the virgin/whore dichotomy.

5. We're voluptuous. Like many people, I can't deny that J. Lo has an amazing rump or that the curvaceous Sofía Vergara is absolutely stunning. The problem is that whenever we see Latinas in the media, they are almost all conventionally attractive and European-looking. Latinas, like all women, come in an endless variety of shapes, sizes and colors. Many women do, in fact, have a “Coca-Cola bottle body,” but there are so many others who don't fit into that mold. If you were to watch telenovelas, you'd also probably believe all Latinas are fair-skinned (except for the servants, of course). According to the Project on Ethnicity and Race in Latin America at Princeton, however, based on available estimates, about 45 million of the 500 million people in Latin America are indigenous and about 90 million (100 million if we include Haiti) are Afro-descendants. It would be nice to see that diversity on the screen.

6.We're straight and ultra-feminine. Nearly all the Latinas in the media dress in a way that is very conventionally feminine — high heels, makeup, hoop earrings, etc. There is nothing wrong with expressing femininity in this way, but this assumption can be a burden for Latinas who choose not to look this way. Amy, who preferred not to use her last name, says this is frustrating to her as a queer Latina. “This is a challenging trope to embody. To me, it seems exhausting,” she says. I agree. Perpetually fulfilling this narrow definition of sexy can be a real drag. I certainly don't feel very alluring when I go to sleep wearing pimple cream and a mouth guard. Please don't expect us always to look like we just walked off the set of a telenovela.

Amy also points out that there are very few roles on television for queer women of color. “Discussions of sexuality don't happen. This is fairly new territory. There's no conversation,” she says. One of the few exceptions is the character of Dr. Torres played by Sara Ramirez on"Grey's Anatomy." Amy believes it wasn't a casual decision, but a concerted effort to paint characters in diverse ways. The rest of Hollywood could learn a thing or two from Shonda Rhimes.

Erika L. Sánchez is a poet and writer living in Chicago. Her work has been published in Cosmopolitan for Latinas, NBC Latino, The Guardian, Al Jazeera, Truthout, and other publications. She is a recipient of a Fulbright Scholarship and 2013 "Discovery"/Boston Review poetry prize. You can find her on Twitter @ErikaLSanchez, Facebook at https://www.facebook.com/writererikalsanchez, or www.erikalsanchez.com.