My happiness is worth more than fart jokes

Success as a professional funny person has come hand-in-hand with depression. Now I'm asking: Is this what I want? 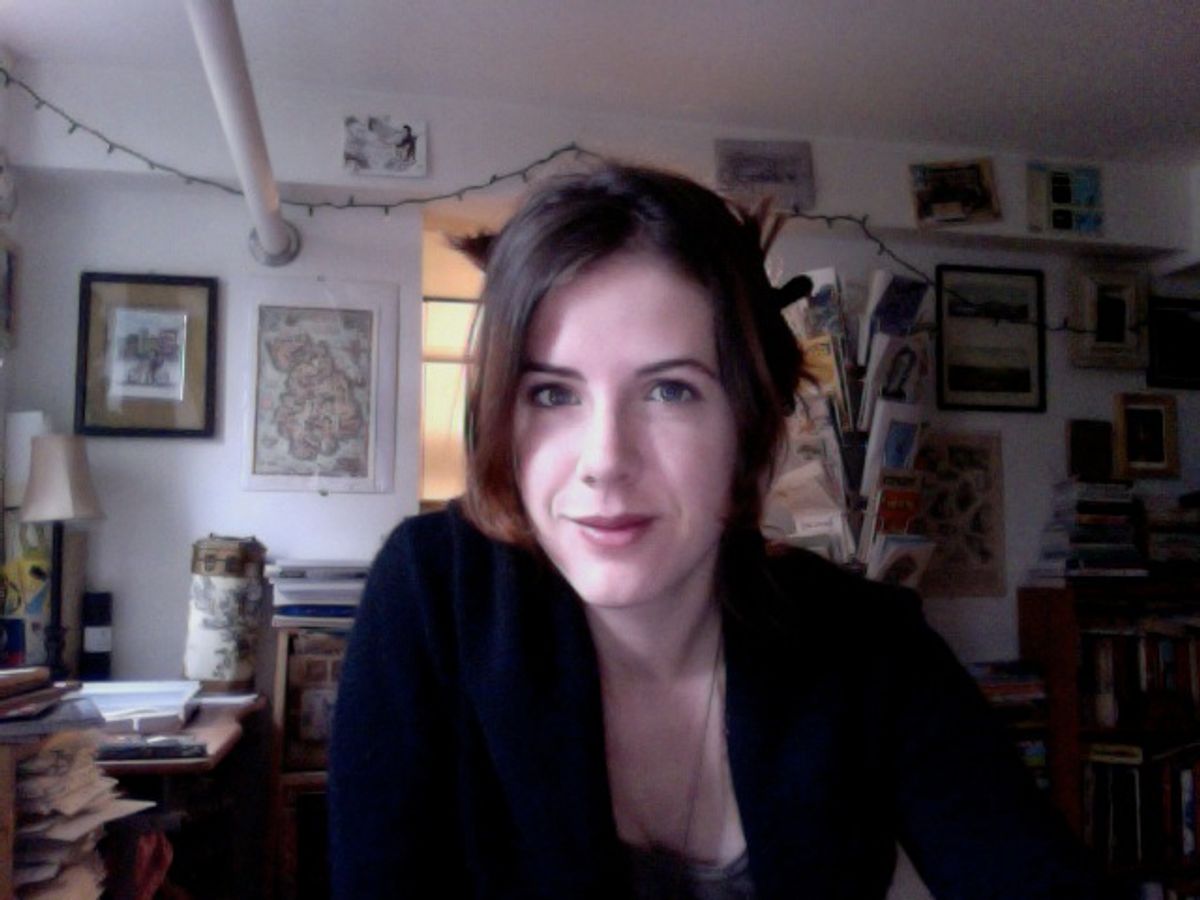 If you ask someone who works in comedy what is the most difficult part of being professionally funny, many, if not most of them, will tell you it’s the depression. I’m not saying all funny people are depressed, but having spent a lot of time with cartoonists, comedians and comedy writers over the past decade, I can assure you that the percentage of those struggling with depression is higher than average.

My theory is that since the best comedy often springs from tragedy, cynicism, sarcasm and misanthropy, those who excel in comedy usually come from a background composed of those events and character defects.

As a cartoonist, my comedy writing comes from a turbulent upbringing, a chronic illness and substance abuse. For my whole life (starting as a baby, or so claims my mother) I’ve oscillated between cynicism and buffoonery. Those two dynamics translated well onto paper, creating a popular, humorous autobiographical comic book series about my life, which I gave the unfortunate, non-sequitur title The Fart Party. However, in real life, those opposing personality dynamics created the classic Janus Mask lifestyle often utilized by chronic alcoholics.

During the height of my career thus far (2009 to 2010), I found myself living the classic double life of appearing well in public but going to hell in private. The following are pages taken from three different sources: 1) A completed, yet unpublished book about my alcoholism, 2) sketchbook diaries I made while bottoming out, and 3) pages from "The Infinite Wait and Other Stories," the first book I ever made while sober. 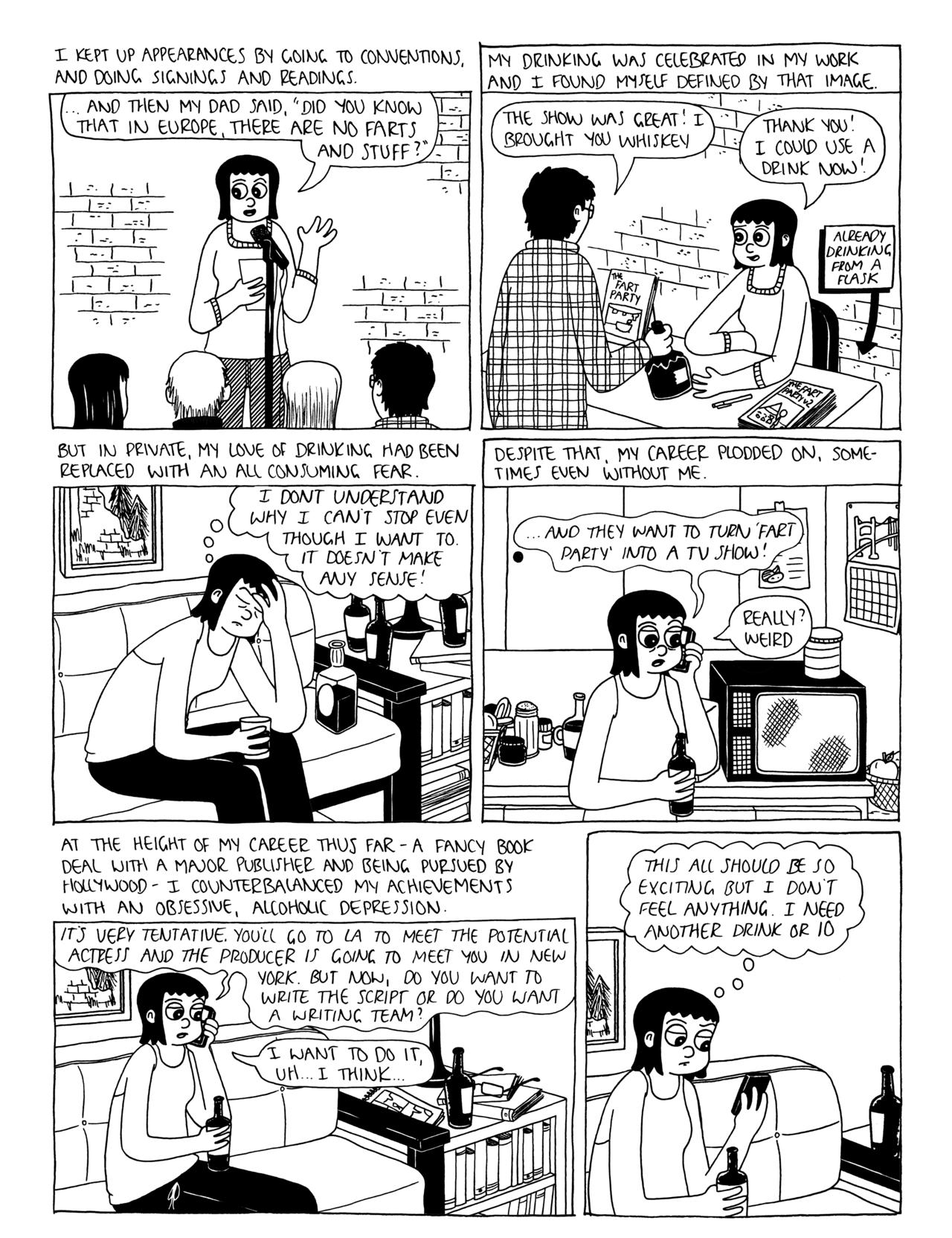 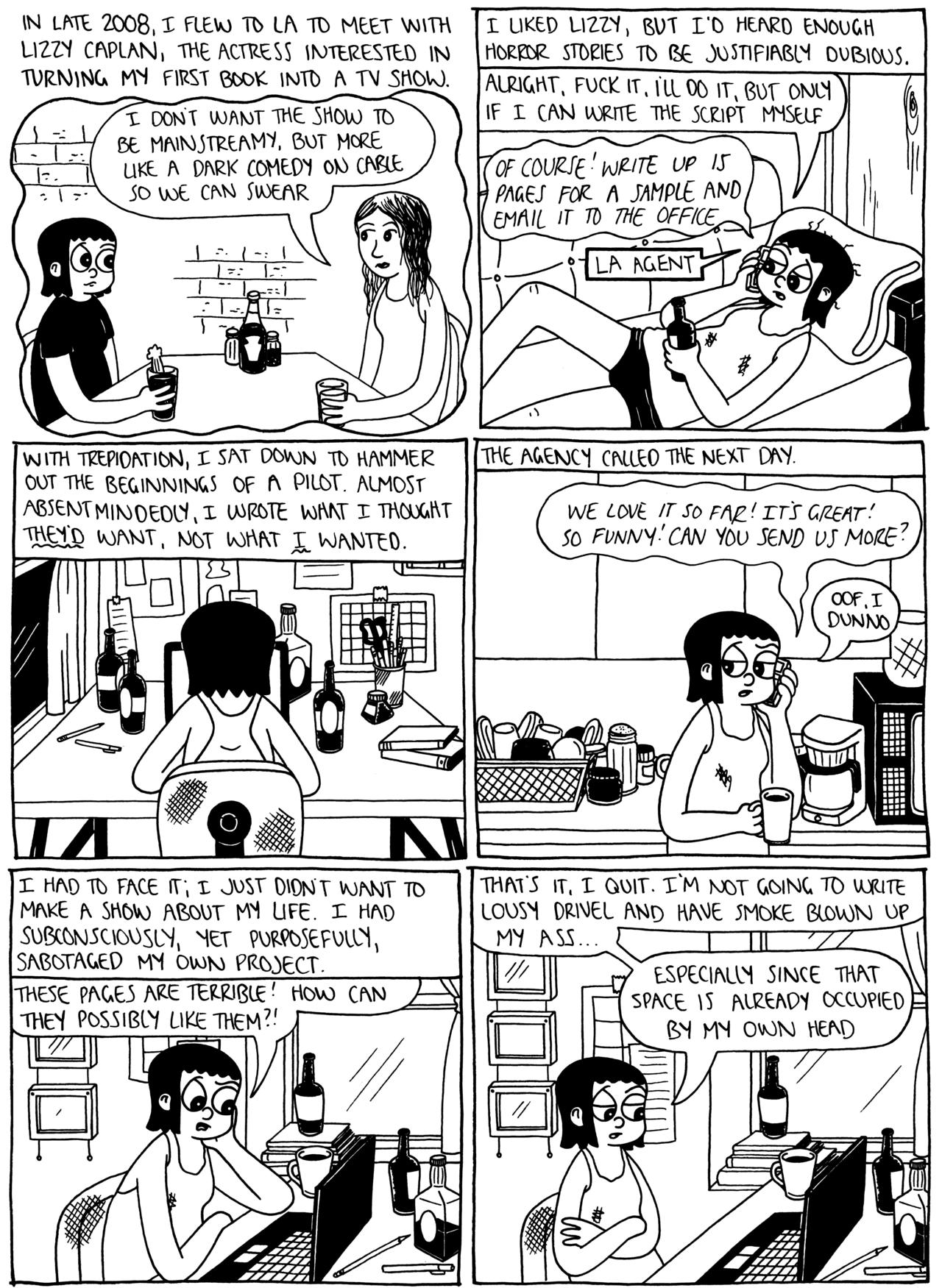 While my career was expanding, despite my best efforts to sabotage it, my private life became so small, it almost solely took place in my 300-square-foot Brooklyn studio, plus the block I walked to the liquor store. My efforts to quit drinking only exacerbated the problem, yet all the while I continued to make comics, often using my alcoholism as material. 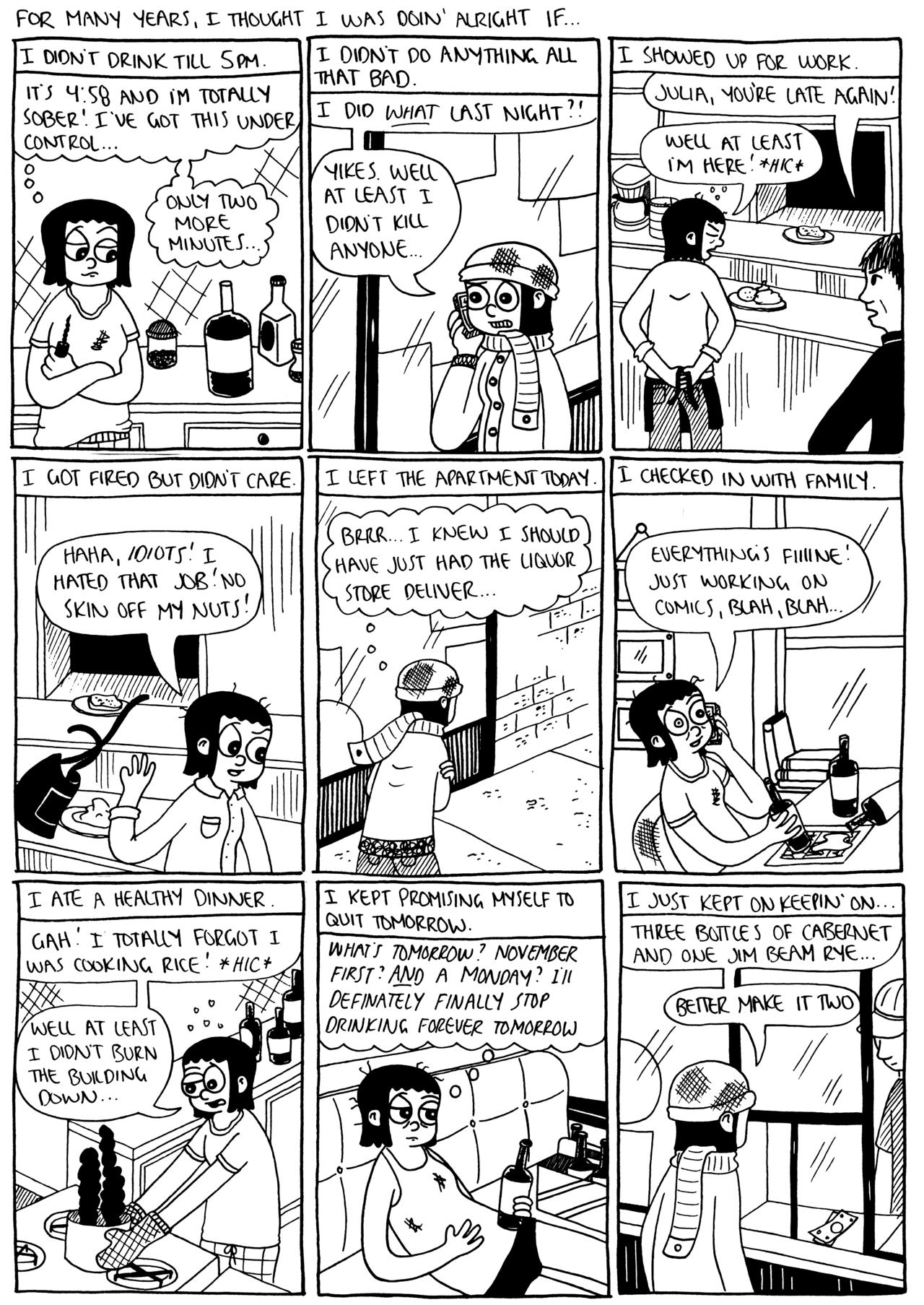 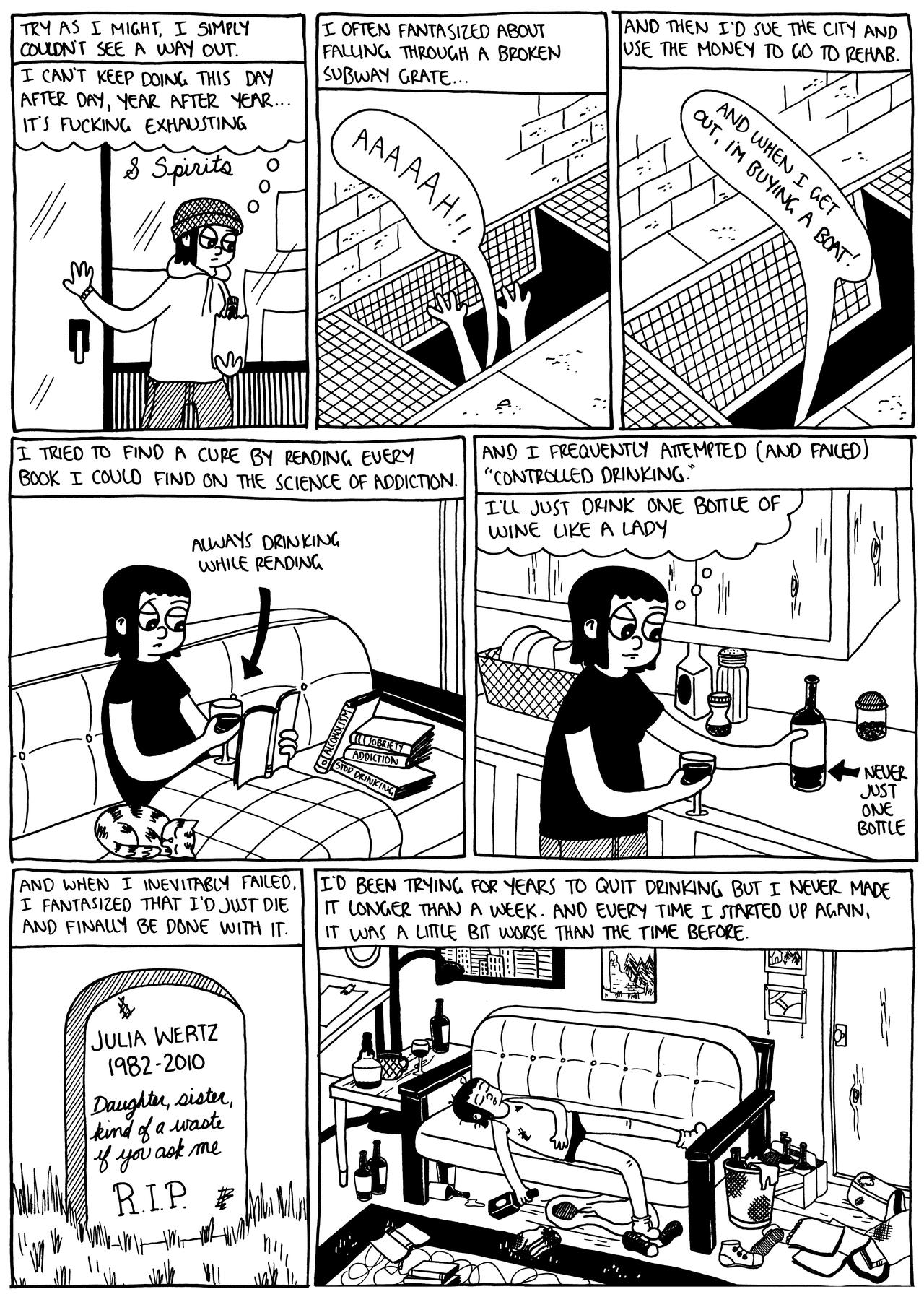 The way I presented myself in comics was in a cartoony style, with short black hair and bug eyes. It was a style I’d settled on years ago, based on a hairstyle I had once, for about two weeks. I chose the style quickly, without much thought, but perhaps I subconsciously did it to separate my real self from my cartoon self. My cartoon self made my problems seem funny, but when I drew my real self in secret diary comics, the tone and style was completely different and much more reflective of the truth during that year. 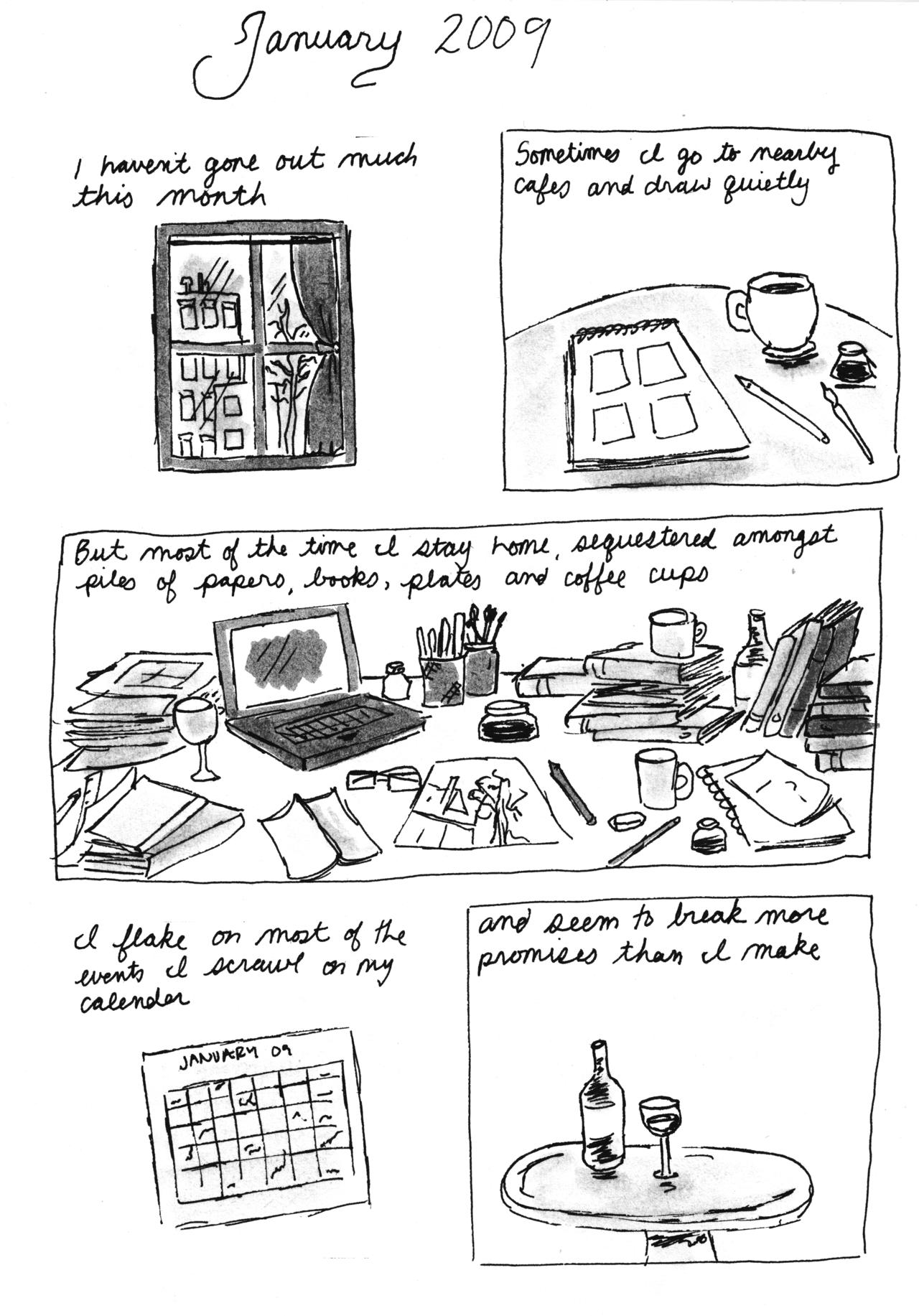 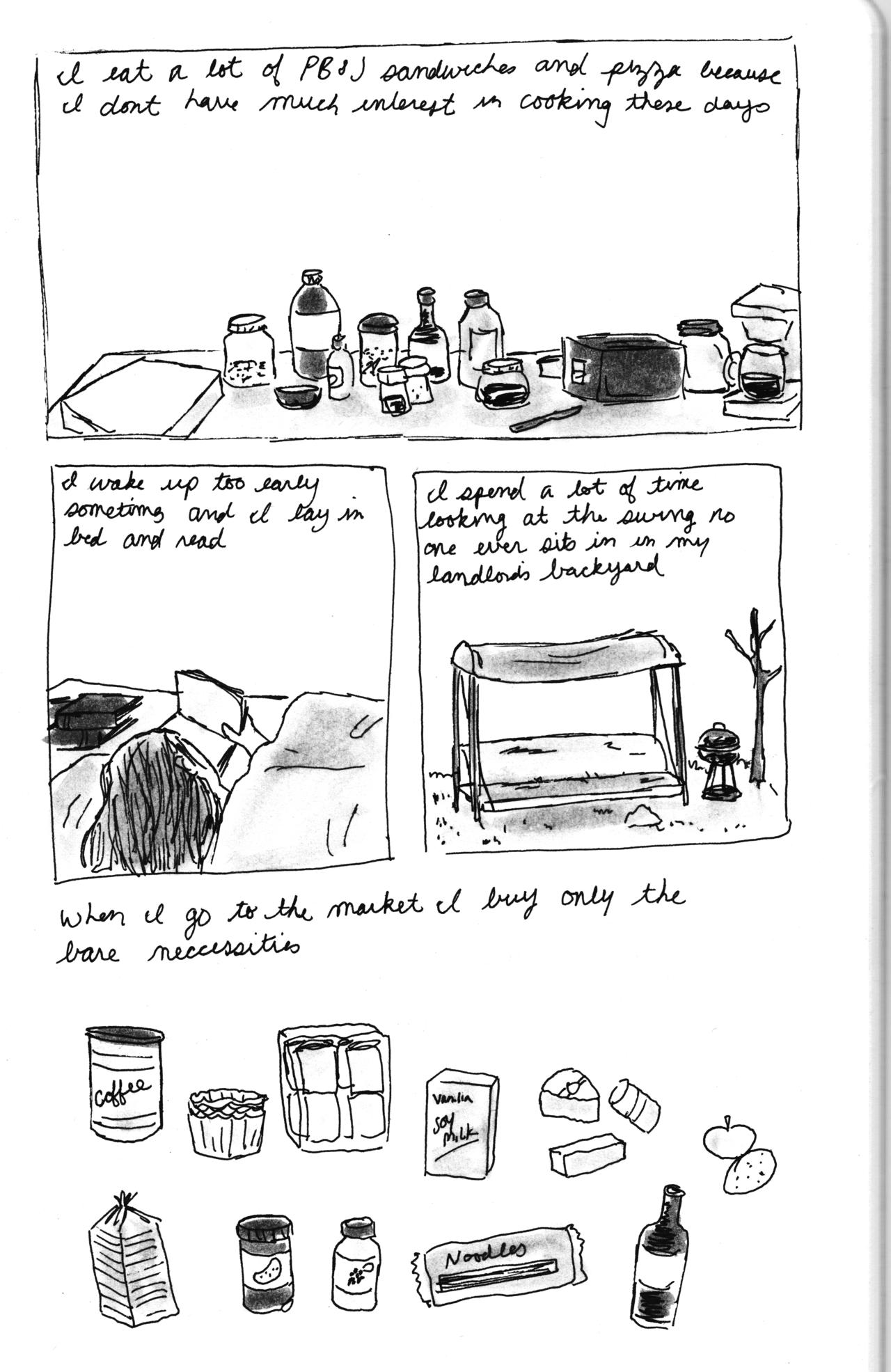 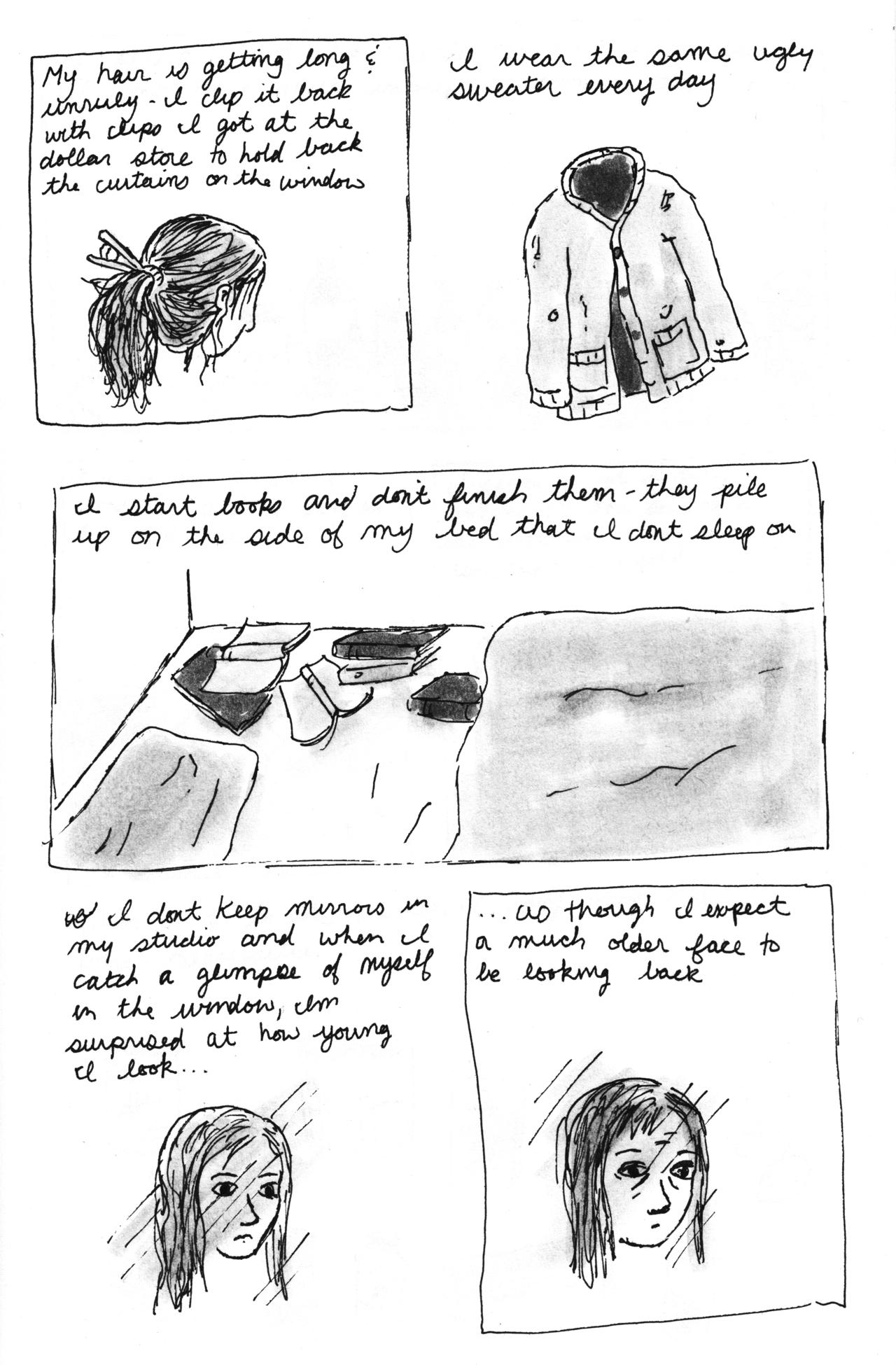 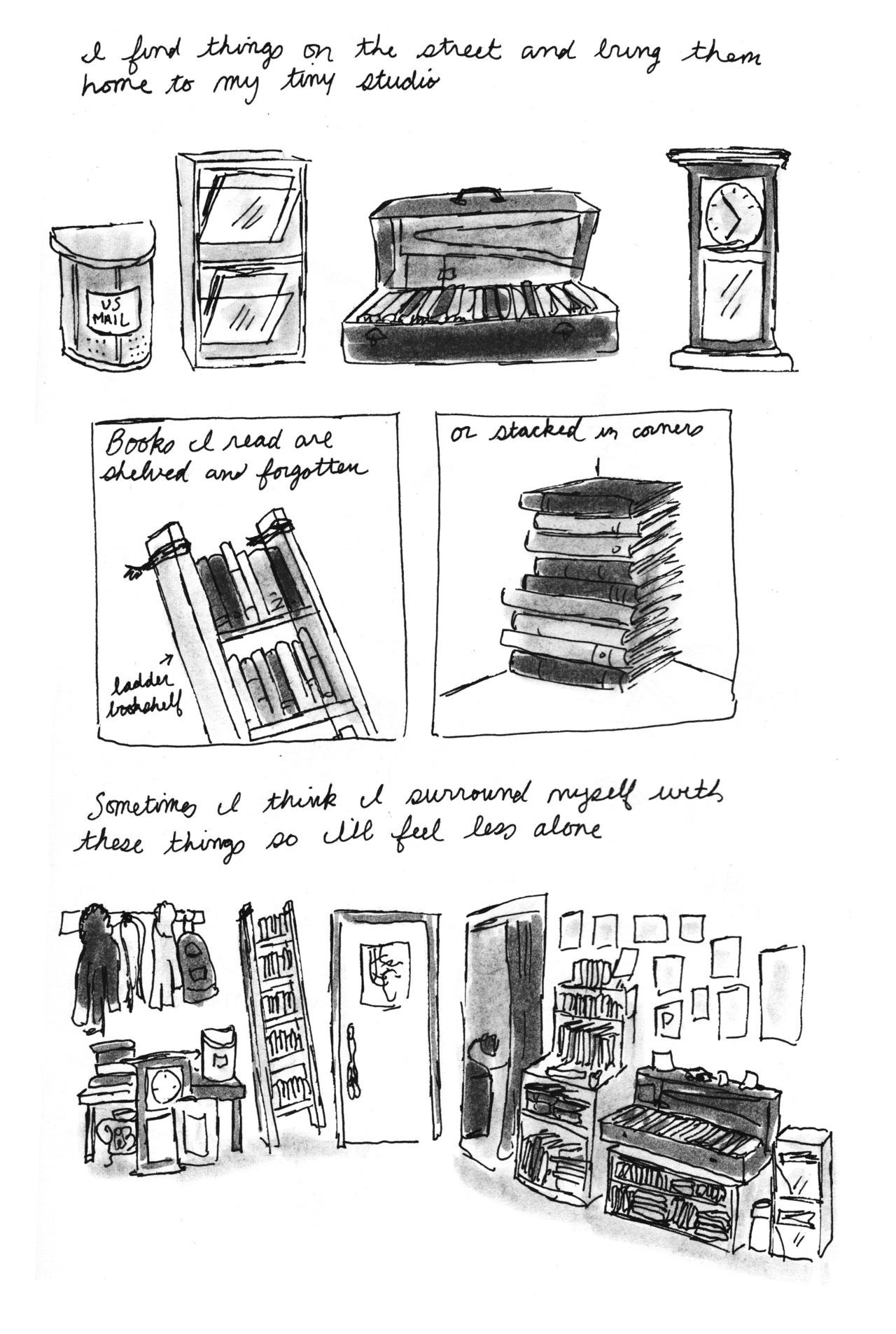 In 2010, some cartoonist friends and I got a work studio that we called Pizza Island. The studio was my effort to get out of the house, to socialize more and stop isolating. Although I was still struggling with my drinking, being around my closest friends was helping. But it wasn’t enough. My drinking had progressed to the point where I was in and out of the hospital for alcohol-related health problems, and when I found myself lying in an MRI machine on Christmas Eve, I knew I really had to stop. Of course I drank past that point of realization, which is how I knew I was really an alcoholic, and in May, I shipped myself off to rehab. These are the some of the letters I wrote home to the girls at Pizza Island. 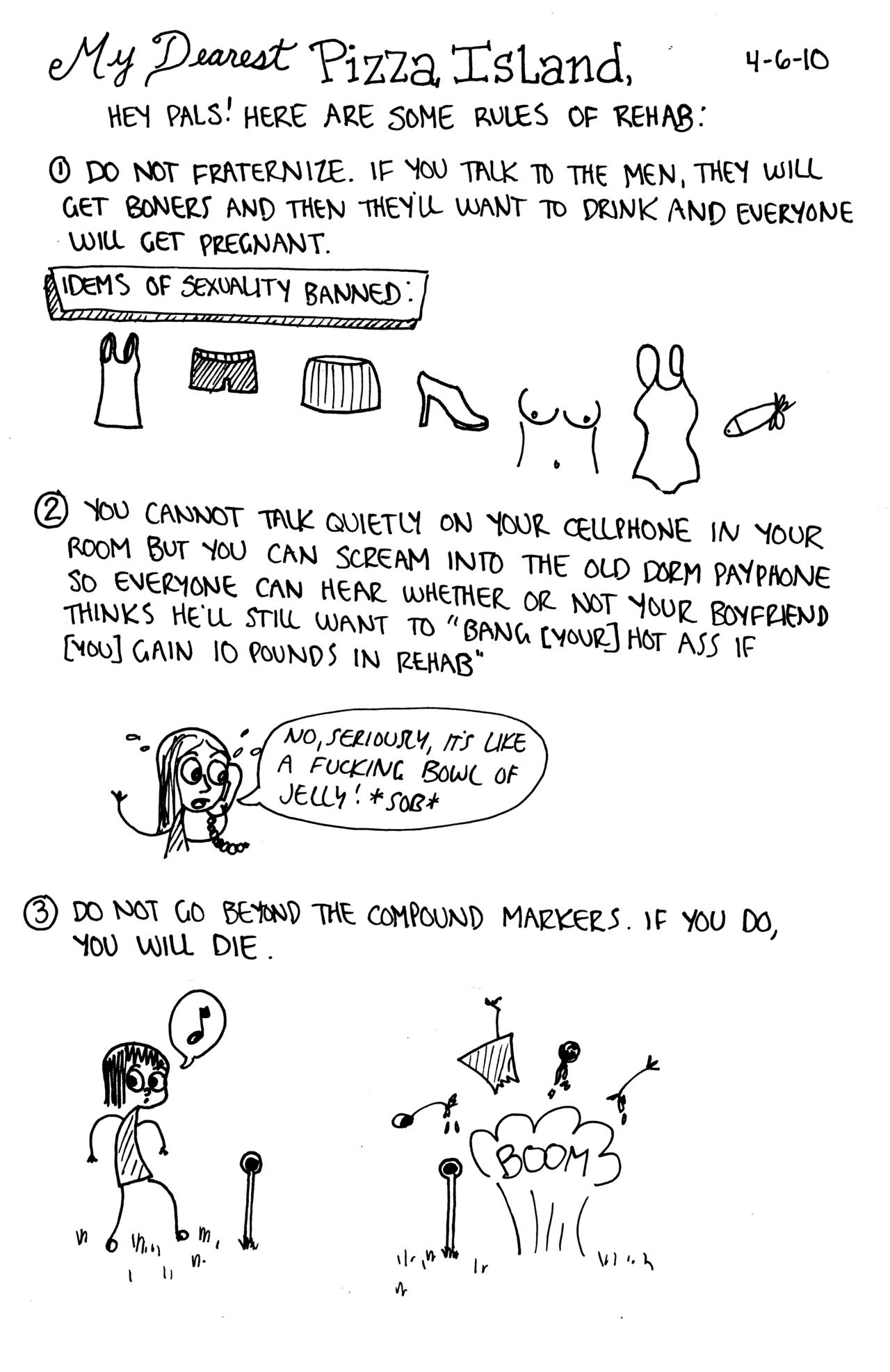 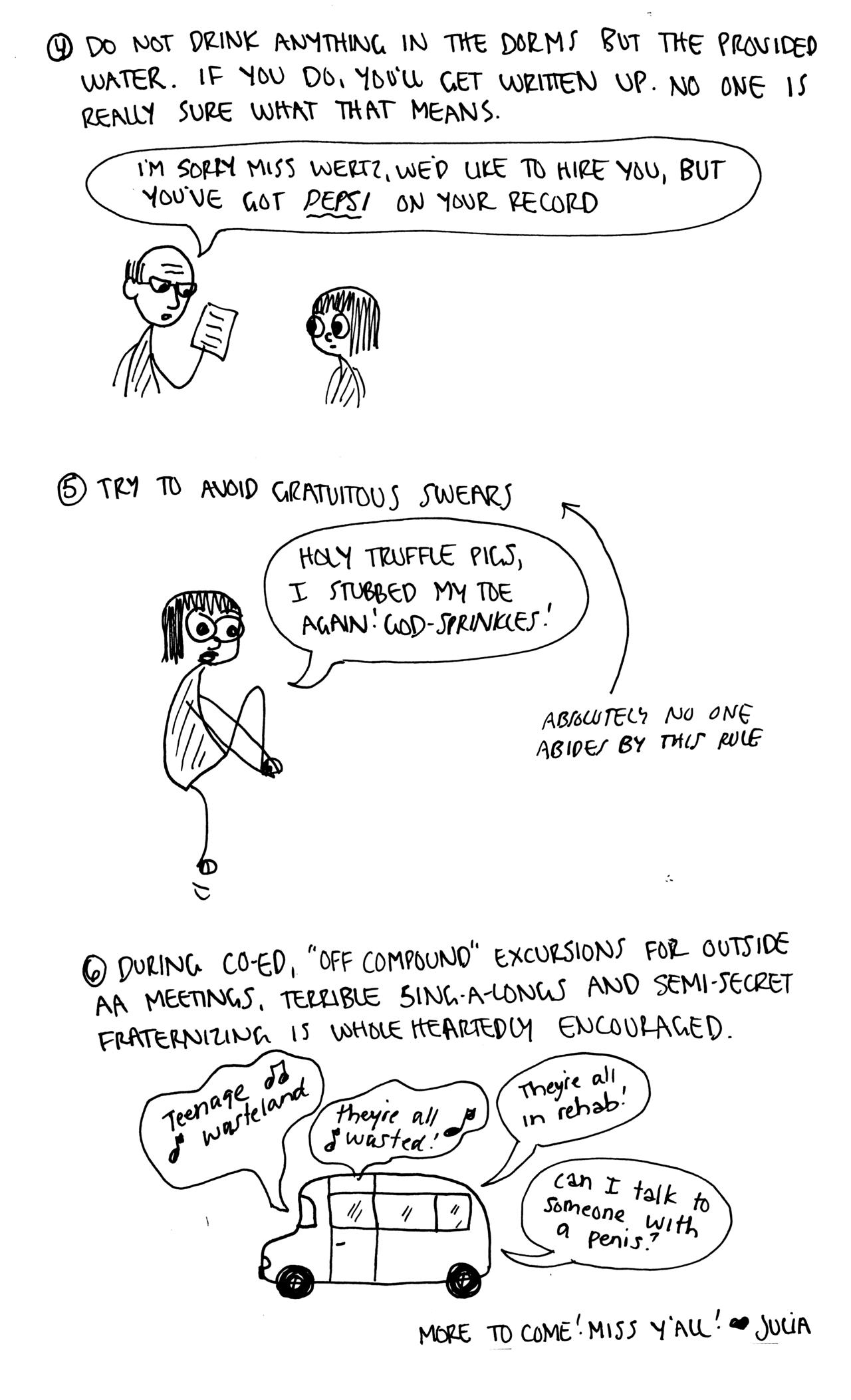 After rehab, I’d like to say my life stabilized, but it didn’t. The whole addiction/rehab/recovery cycle is not like it is in movies or books. In fact, the majority of people who go to rehab do not recover immediately, if at all. While rehab temporarily straightened me out, it ultimately set off a cycle of relapsing that wouldn’t end until 2012. 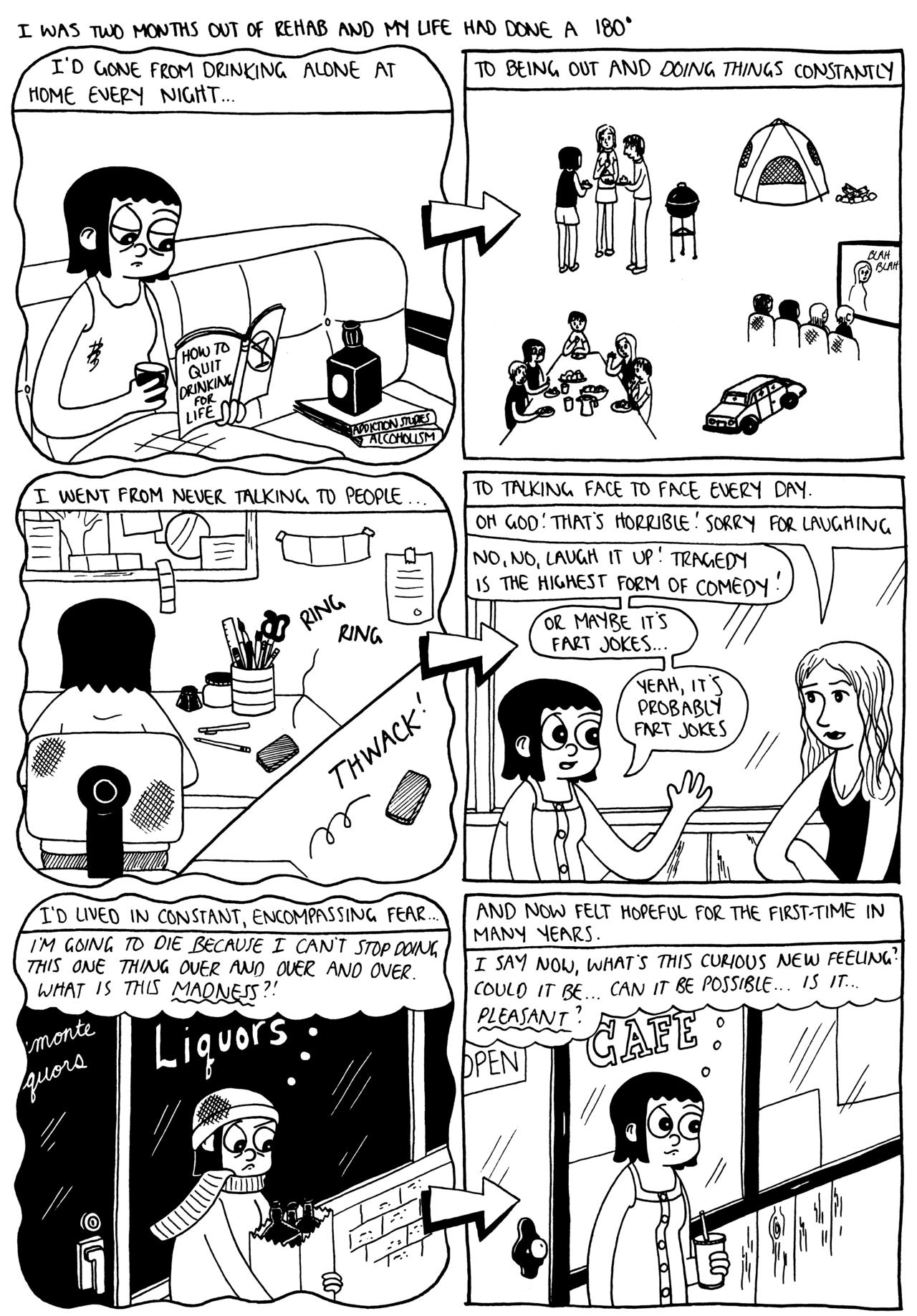 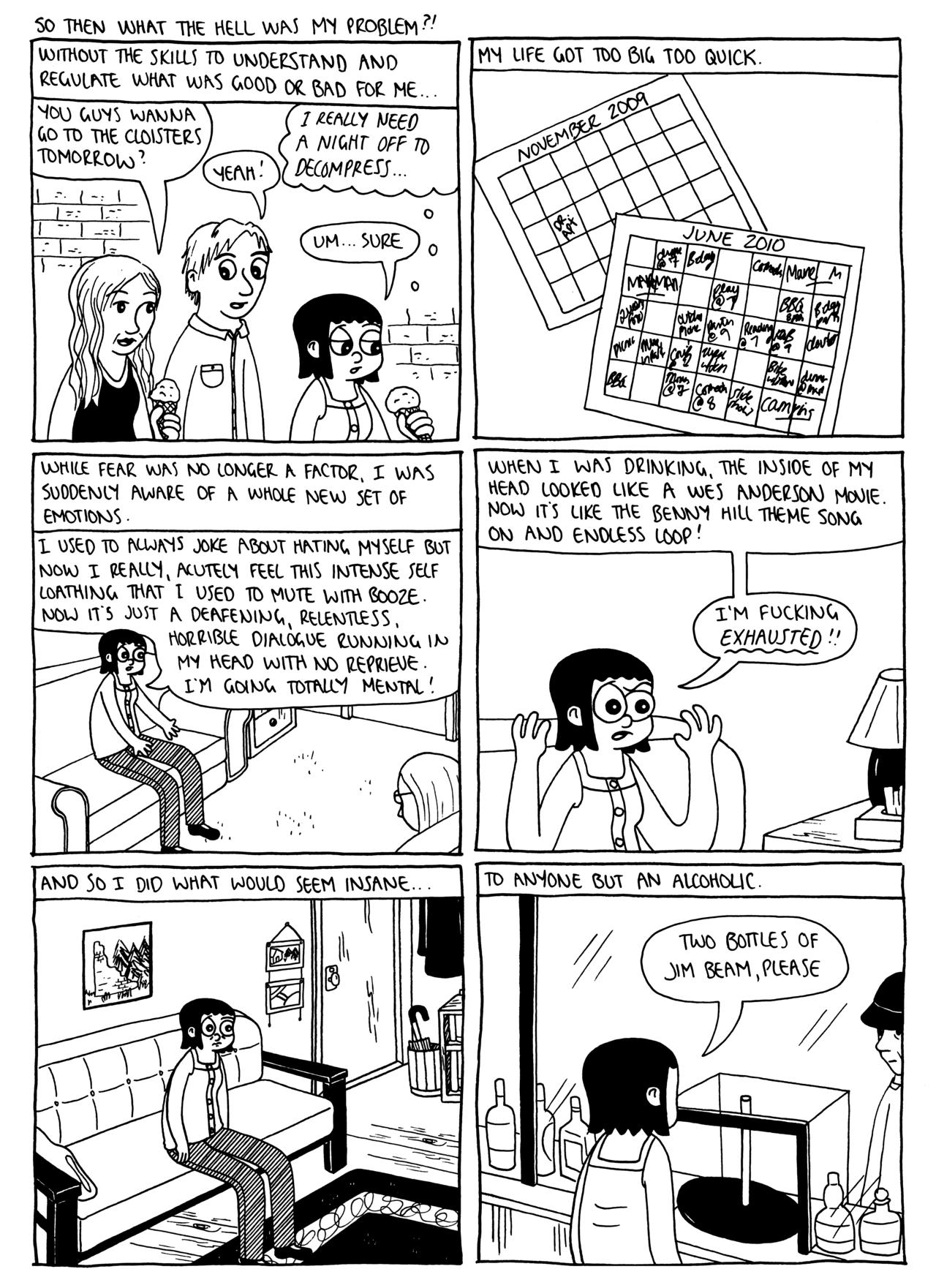 Sometime during 2010 and 2011, I secretly completed 230 pages of a graphic novel about my alcoholism that I never showed anyone, and ultimately shelved. I still haven’t decided what to do with it. Besides a few pages I’ve published here and there (and here, right now, in this story) it mostly just takes up space in my filing cabinet. 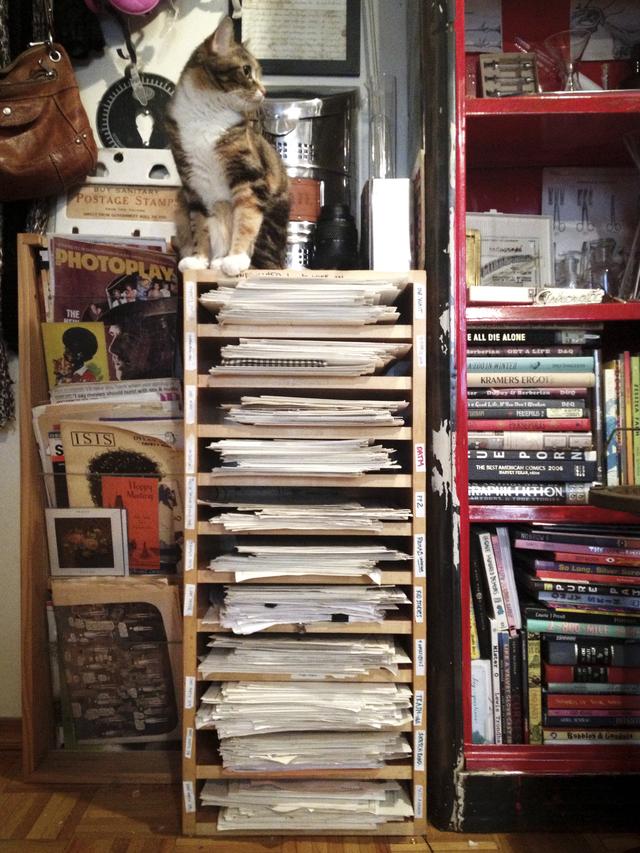 In the first half of 2012, I threw myself into working all day, every day, on a book called "The Infinite Wait and Other Stories." I had no idea how to cope in the world without drinking, and instead of trying to figure it out, I just holed up in my apartment and worked constantly, completing a 228-page graphic novel in six months. I didn’t drink at all during that time, but I didn’t exactly live a normal, healthy life either. 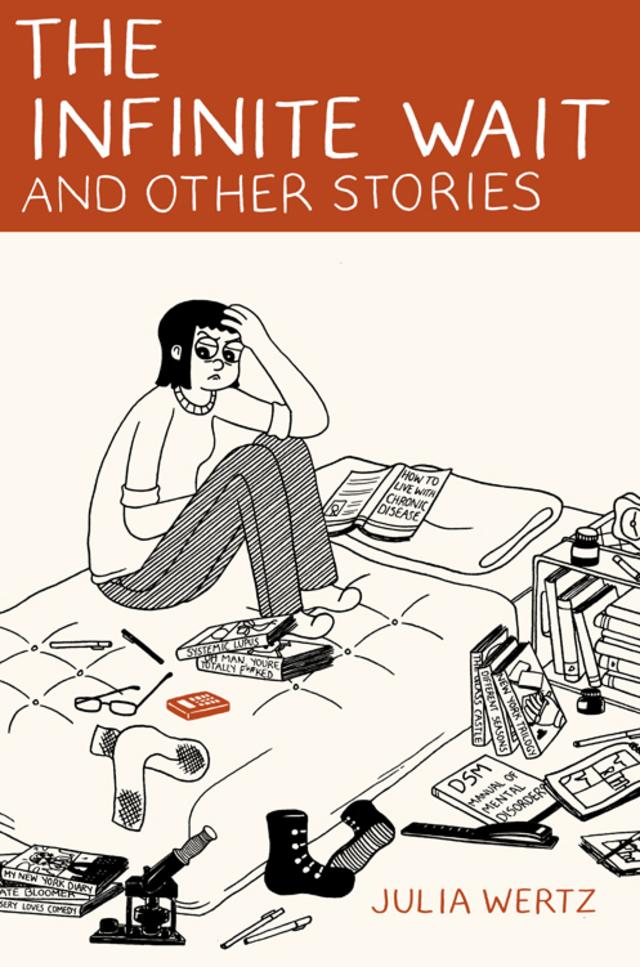 And then something changed. It wasn’t planned; it didn’t directly have anything to do with comics or drinking, although it had everything to do with both. Right after I sent in the final pages in for "The Infinite Wait," I put away all my drawing supplies and I went outside. Well, more accurately, I went outside and straight into an abandoned insane asylum in New Jersey. And I haven’t drawn comics since.

I am still a cartoonist, don’t get me wrong. In fact, I have a collection coming out next year and will begin working on a book in the spring of 2014. But for the last year and a half, I’ve been what people insist on calling an “urban explorer,” much to my chagrin. I just don’t like it, it sounds cheesy, but no one has come up with a less ridiculous term yet.

I used to explore abandoned places all the time as a kid and teenager growing up on the West Coast. I spent part of my childhood trekking through the woods and creek near our house, looking for abandoned farmhouses and storm drain tunnels to hang out in. As a teenager, I’d cut class and go explore an abandoned castle in the foothills or fuck around on a defunct military base out in the marshlands. In my twenties I explored casually—maybe a hotel here, an old hospital there—but I didn’t go out of my way to do it, even though I enjoyed it. And besides, most of my twenties were spent dealing with being diagnosed with systemic lupus and being very ill, which I followed up with years of heavy drinking and pill-popping. I was very busy.

Once I stopped wasting all my spare time drinking, I re-discovered my enthusiasm for exploring. I started frequenting numerous abandoned places along the east coast—hospitals, asylums, theme parks, resorts, hotels—and taught myself how to use a camera. I befriended other explorers and began traveling with them, going on road trips and weekend excursions upstate. Without realizing it, I’d replaced a boring, solitary, indoor habit with an exciting, social, outdoor hobby. 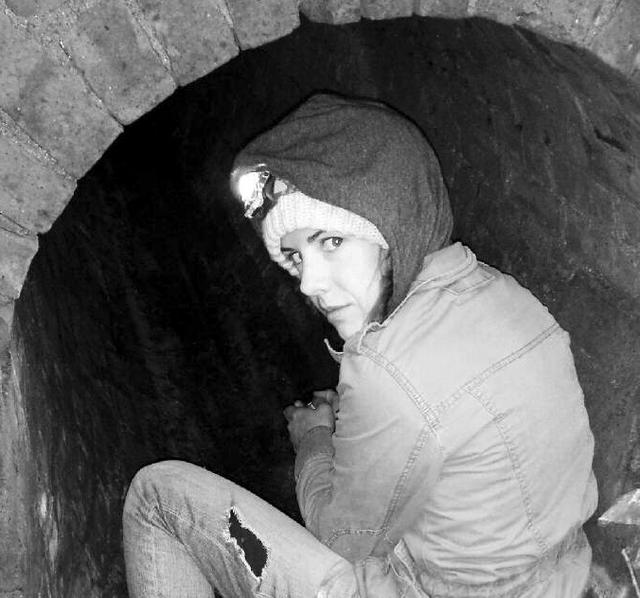 So the question that probably didn’t cross your mind until I put it there is, if I’m happy and healthy, does it have a negative effect on my comedic work? And the answer is that I don’t know. And I don’t particularly care. If being a good comedy writer means I have to be depressed, then fuck it, I quit. The world doesn’t need any more fart jokes anyways.

"The Crumbling Beauty of an Old Asylum"
"Allergic to America"
"Man vs. Bull"
"Have You Ever Heard the One about the Sober Stand-up?"