How Nintendo took over the world

Early Nintendo games succeeded by embracing, not fighting against, their profound technical limitations 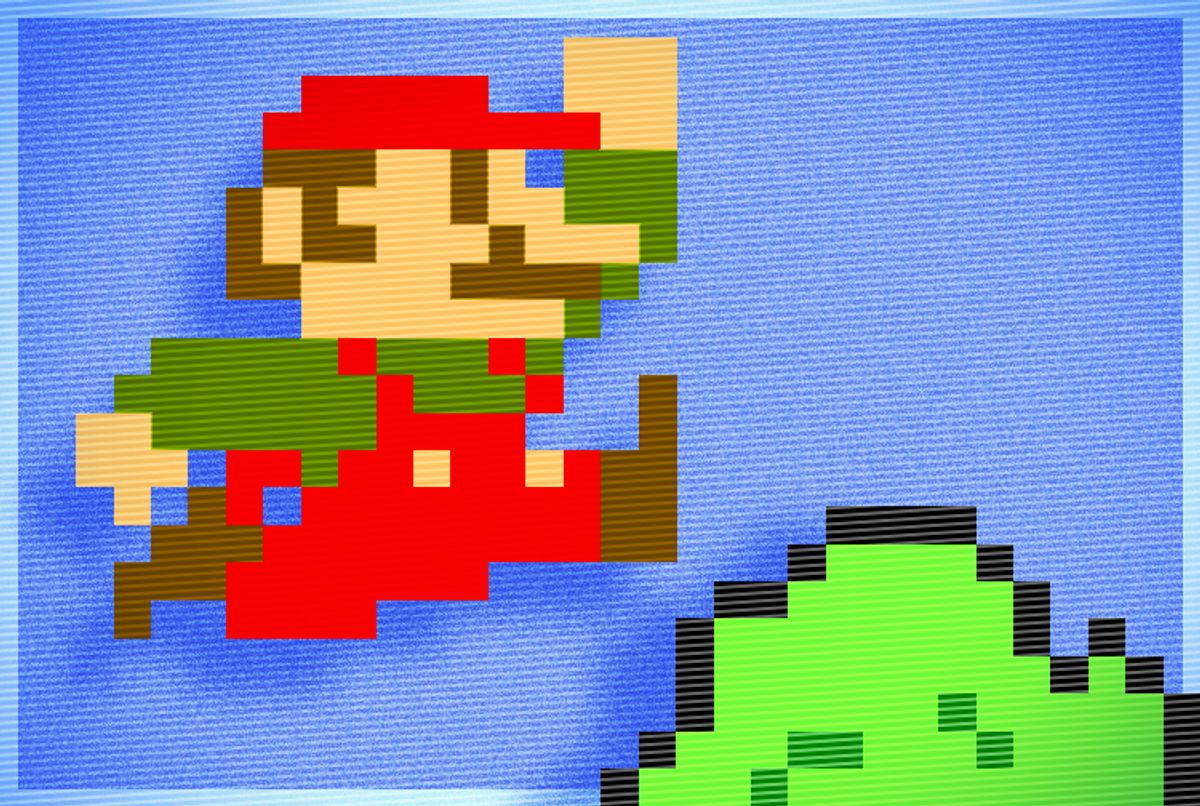 I’m one of those people for whom video games were a crucial part of childhood. They were a digital treasure trove that came to define the way that I, and many of my peers, would approach reality. My parents, they’d played pinball. And they knew of Galaga, Pitfall and Pong — Atarian relics that, a year after my birth in 1983, when the video game industry collapsed for the first time, stood by helpless as their host company met its demise. But they weren’t afforded the leap into the future that was the Nintendo Entertainment System, the brainchild of a century-old Japanese enterprise that aimed to alter the global framework of play.

In honor of the NES's 30th anniversary last year, I decided to go back through the Nintendo archives, by which I mean I sought out a website in which one can (for free) play old NES games. The Wii offers cheap classics on their online network, but in order for me to truly dig deep I had to relocate to some of the Internet’s seedier domains, where you immerse yourself in childhood nostalgia while attempting to ignore ads for Adult Friend Finder and Mucinex.

It’s worth noting that by today’s gaming standards, the NES is a drooling, 8-bit primitive. Unlike modern games, whose limits are always being pushed, the original Nintendo was capable of projecting only up to 25 colors on screen at a time (with significant restrictions) to create a 256 x 240 pixel spread. This means Super Mario, the iconic plumber now a keystone in Nintendo’s entertainment edifice, was created within parameters so restrained that developers had to give Mario white gloves and red overalls just so that it was possible to see his arms swing as he ran. To provide even more context, the largest game the NES ever produced (Metal Slader Glory) took up 1 megabyte of hard drive space. By way of comparison, games for NES's eventual heir the Wii typically take up 8.54 gigabytes. And yet for all its simplicity (or maybe because of it), there is something biblical about the NES. Something that canonized the idea of home video-game entertainment for millions of game worshipers worldwide.

As I sat down to begin my own personal nostalgia-quest last year I had an almost shocking experience of sensory transmigration. Silly as it may sound, loading up Bubble Bobble stirred something deep inside me, something both emotional and reflexive. I squinted with wonder at the avatar of my tiny green dinosaur encased in a bubble (the very same weapon with which it trapped its enemies). Up came the phrase “Now it is the beginning of a fantastic story! Let us make a journey to the cave of monsters! Good Luck!” and I wondered if finer words had ever been written. An upbeat twinkle of mythical sparkle sounds and blunted synthesizers heralded the introduction, and fell flat for half a second before the actual game began.

At first, my fingers wobbled through the controls. I’d become used to consoles like the PlayStation 3 and Wii. It had been a long while since I’d dabbled in the thrill of retro-gaming, and I was hoping to treat the experience with seriousness and depth. I quickly realized that as I played, my mind genuinely retrieved past knowledge to guide me through the motions. I felt what might be the gaming equivalent of attempting to decode a passage in Chaucer only to realize that I’d been taught Middle English as a child. Soon enough, I was unconsciously remembering button combinations, and visual combinations as well. Though Bubble Bobble was built to enable thousands of different player sequences in order to beat it, I was directly channeling the exact same ones I had as a small child. The experience confounded me.

Though the Nintendo Entertainment System formally made its American debut in 1985, its Japanese progenitor, the Famicom, an anglicized abbreviation for "Family Computer," was born in 1983. The Famicom’s opening line of games, which included Donkey Kong, Lode Runner, Star Force and Super Mario Bros., had made the rounds in Japan to fairly popular acclaim. Nintendo’s first artist, Shigeru Miyamoto, who created Super Mario and went on to become the company’s most prized talent, drew his character inspirations from both personal experiences as a child and his familiarity with Manga strips. Using development techniques from comics lent his game characters more vivid, child-friendly identities, identities that allowed games to reach beyond simple point-nabbing competitions and become emotionally relatable adventures. These adventures had narratives, characters and a sense of substantive achievement if you could reach the end.

Before Nintendo, game packaging often featured realistic pictures that in no way reflected the faceless block avatars you’d see on screen. With Nintendo games, however, the packaging more honestly reflected the material it sold. Sometimes the cartridges even featured direct screenshots. And game designs that incorporated comic book-like content helped players come to see themselves as interacting with a whole cast of characters. The concept itself, while obvious in retrospect, constituted a full-on revolution at the time.

Since Nintendo has been in the game-making business for more than 100 years, it might not be considered overly surprising that they eventually hit the bull’s eye. Founded in 1889 by Fusajiro Yamauchi, and originally called Nintendo Koppai, it began producing hand-crafted hanafuda, or "flower cards" that were painted on mulberry tree bark for the purpose of gambling. In the 1960s the company changed its name to Nintendo Co. Ltd., and began to branch out in different directions, from (eventually failed) love hotel lines and cable television networks to devices like the "Ultra Machine," a batting toy that launched soft balls, and the "Love Tester," which invited lovers to grab spherical metal sensors to determine their level of devotion. In 1977 the company launched what could be considered the NES’s predecessor, "Color TV Game 6," a single-game system that went on to have marginal success. 1983, however, was when they truly broke the mold, creating the first console whose cartridges could be interchanged.

As I worked my way through the Nintendo canon from Mega Man 1 through 5, Castlevania, Zelda and Double Dragon to Top Gun, Rygar, Little Nemo the Dream Master, Contra, Ice Climber and Super Mario Bros. 1, 2 and 3, I noticed that these early game designers of Nintendo had discovered they needed to work with the limited technology available at the time, rather than against it, to produce a viable product. Each game had to include two factors: originality and excitement. Thus, if you were working within limited parameters, your imagination had to be constrained. Or at least reapportioned. I found a great example of this in Super Mario Bros. 3, which would come to reinvent Nintendo's legacy.

As I played the game through to the end, I discovered something interesting. The game designers hadn't attempted to ignore the constraints of the technology to create a new product. They instead worked with what they already knew. In the Super Mario Bros. universe, a player had to contend with the game's trademark physics in order to beat a level. If you didn't land on a block, or jump over a pit with the painstaking accuracy unique to the preestablished structure of the game, then you, in effect, fell to your death. In the original Super Mario Bros., this odd sense of play, all but devoid of real-world gravity, was uniform throughout, proving that it was abstractly possible to reinvent the laws of physics within a digital platform. In short, you, as a player, learned how to manipulate Mario's movements as they existed only within the game. And learning those movements was, in fact, the secret to completing it.

In Super Mario Bros. 2 and 3, the designers not only channeled this idea of alternate game physics -- they expanded upon on it. Mario could now, without jumping, actually step between two adjacent structures if he was running fast enough. He could even fly and float for a certain amount of time when he procured an item called "The Feather" that gave him a raccoon tail. To play Super Mario Bros. 3, you had to recalibrate your mind.

Super Mario Bros. 3 may not be the most apt example; in some ways it's less compelling than some of NES's less successful titles. But the reason it became so memorable is that it took a set of simple ingredients and used them wisely. In our modern age of digital pandemonium, where hyper-realism dominates every aspect of our lives, I found it refreshing to go back to the bare bones. Playing old NES games taught me about games as a whole, the way reading ancient forms of literature or watching old films provides one with an understanding of what the mediums are truly capable of.

As the NES now moves on toward 31, it’s worth acknowledging that games themselves are a special subject. Some gaming partisans shrilly defend them against all criticism, while others consider them the seedy underbelly of entertainment, something that lazy people do when they could be productive instead. The latter might be true in some instances. But if anything, Nintendo can teach us that the best games are products of immense intellect and deliberation. Perhaps when Nintendo gave us the world’s next great art form not even we, its players, noticed. And perhaps that was for the better, since great things tend to happen when no one is looking.