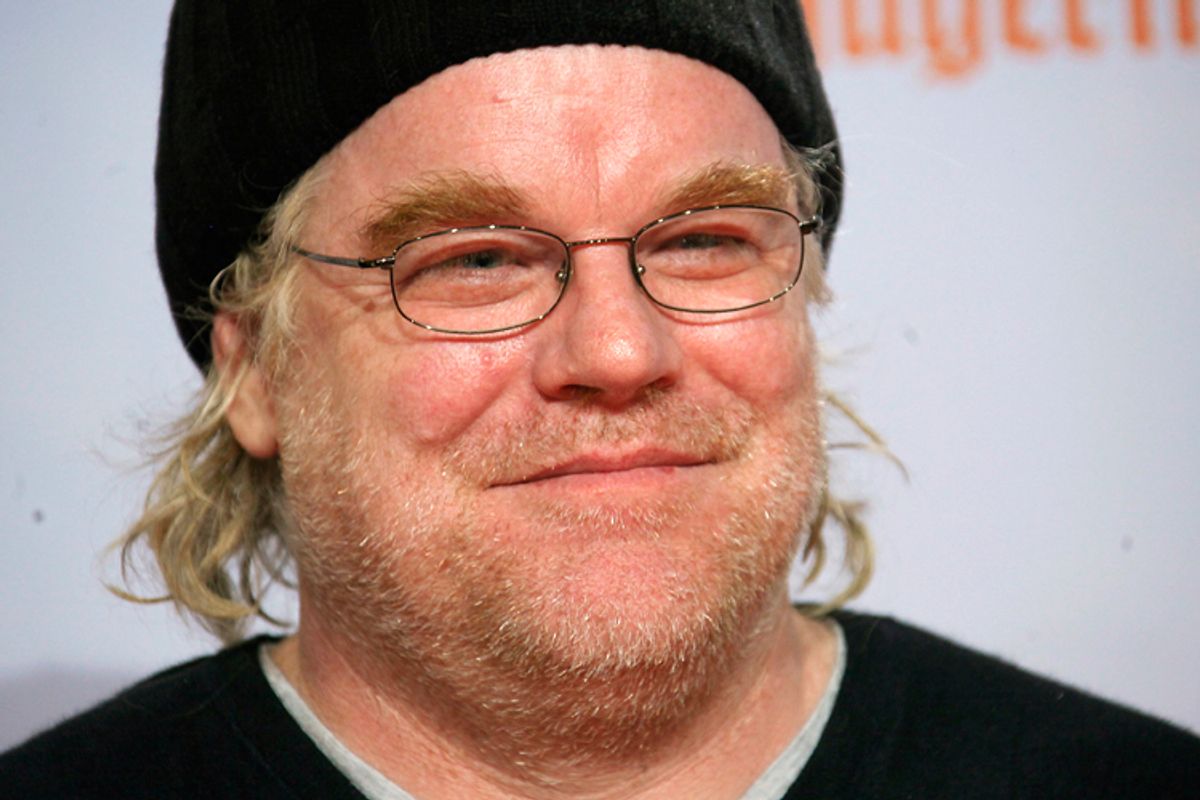 As great an actor as Philip Seymour Hoffman was, it's astounding -- and appropriate -- he never became a movie star.

That seems counterintuitive. The man won a best actor Oscar for "Capote," and was nominated thrice more (for supporting roles in "Charlie Wilson's War," "Doubt" and "The Master"). He was famous enough to be an integral part of the "Hunger Games" franchise and a villain opposite Tom Cruise in a "Mission: Impossible" flick. And yet it was a certain generous quality in Hoffman -- something so fundamental to his shambling, shy-ish off-screen persona as well as within his work on-screen -- that allowed him to forever play the role of supporting actor even as his fame grew.

Hoffman, now dead at 46, was the best actor of his generation precisely because he wasn't a traditional leading man. His work with actors' director Paul Thomas Anderson was subordinate to other, more famous or more prominently placed men -- Cruise in "Magnolia," Mark Wahlberg and Burt Reynolds in "Boogie Nights," Joaquin Phoenix in "The Master." And yet, when I think of "Boogie Nights," I think not of Dirk Diggler's rise to stardom but of Hoffman playing shame and humiliation and utter need. When I think of "Magnolia," I think of a generous home nurse rising above the baroque fripperies to show us exactly what love looks like. "The Master" could be reduced to Hoffman singing "Slow Boat to China" and it'd be fine. Hoffman, had the films been marketed and cut around who therein was the very best actor, would have been the star of each. And yet in each case, he allowed his costars to shine.

It's there even in the cases when Hoffman was either the credited leading man or lending prestige to Hollywood productions. In "Capote," Hoffman's overdue star turn, the star transformed himself in a manner both familiar to academy voters and utterly new. It wasn't an impersonation, so grindingly familiar from films in which actors play heads of state or rock stars. It was a channeling. Hoffman gave us -- there's generosity, again -- a lived-in portrait of a man whose loneliness, whose struggle with the burden of genius, overcame him. Perhaps he knew that struggle better than he ever let on amid the panoply of red-carpet appearances and fluff interviews associated with winning an Academy Award.

The mind reels. A Philip Seymour Hoffman film festival would take weeks, or a month. I have yet to mention his role in "The Savages," in which he, in stalwart fashion, gave Laura Linney the space to decompensate. Or "Before the Devil Knows You're Dead," an underheralded film in which his work as an angry, frustrated brother allowed Ethan Hawke the opportunity to do his own best work ever. Or "The Talented Mr. Ripley," in which he and Cate Blanchett -- an actress cut from the same stuff as Hoffman -- built out an entire world of privilege and venality. Or "The Ides of March," whose director, George Clooney, was smart enough to cede the strongest scene to Hoffman, one that colors the entire character arc of the callow male lead. Or "Synecdoche, New York," in which he stood at the center of a whirling dervish of astoundingly talented female character actresses and each one, as Hoffman convincingly aged, had the oxygen to exist.

When Philip Seymour Hoffman wasn't on-screen, you missed him. And that was his gift -- to be off-screen, to create characters who bettered the entire project by association even though he chose another path besides stardom. He had so many more characters to play, even aside from ongoing commitments: presumably the "Hunger Games" franchise, in whose second installment Hoffman shone as a witty, incisive plotter, will respond in the coming days by casting an actor with a lot to live up to. He had so many movies to take from good art films into transcendent art by dint of his ability to raise the level of play.

And now he's gone. He leaves behind a filmography any actor would envy. That his name is on so few of the DVD covers is precisely the point. He gave himself to his art, and to his fellow actors.