Plenty of people hate Dylan's Super Bowl ads, but loving Dylan has never required liking him or respecting him 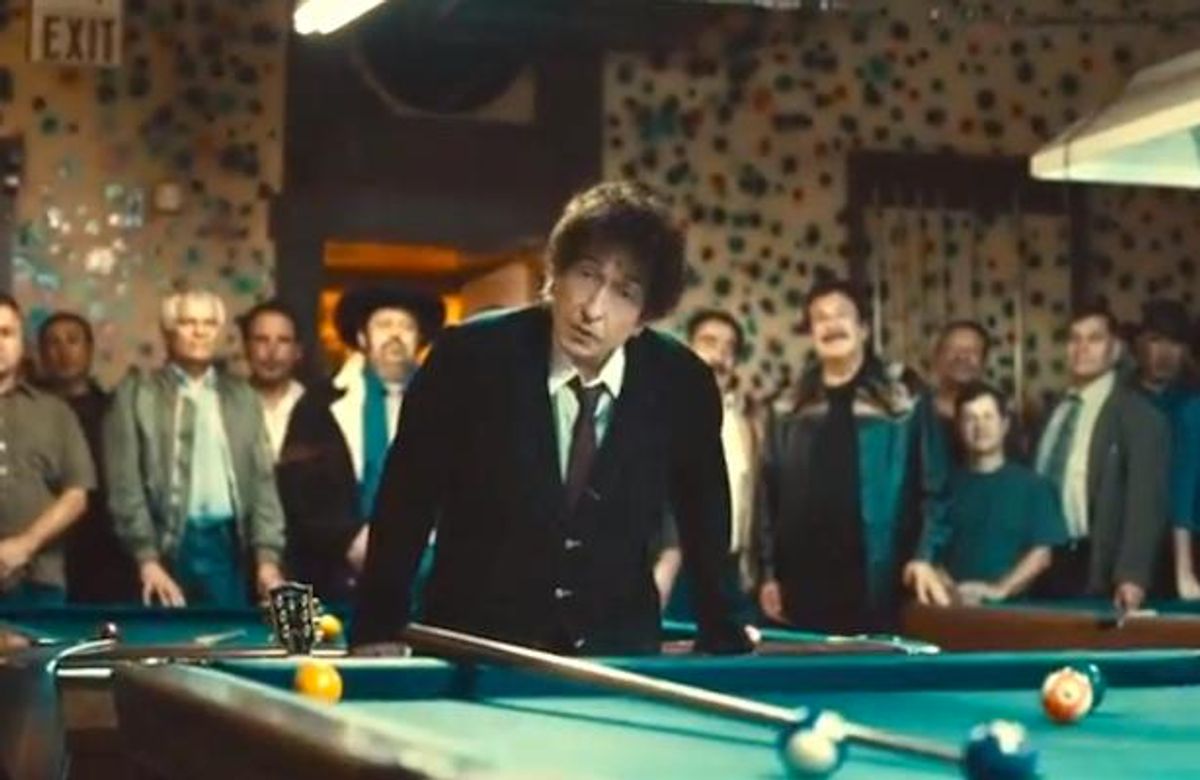 Yes, hearing "I Want You" during an advertisement for a product that is also something of a toxic waste hazard was weird and a little sad. And watching Dylan -- whose aesthetic coolness, perfect and grizzled at 72, remains intact -- shuffle around a guitar shop while mouthing nationalistic tautologies ("What is more American than America?") felt a long way away from the mildly sociopathic charmer immortalized in "Don't Look Back."

But Dylan's artistic and commercial choices have never been ideologically pure or consistently admirable. "The Times They Are a-Changin'" Dylan isn't any more authentic than Super Bowl Dylan, which is why loving him has never required liking or respecting him.

Dylan made his name writing incredibly literal social justice anthems. "The Lonesome Death of Hattie Carroll" is basically a piece of advocacy journalism, and "Masters of War" calls for the actual swift deaths of political hawks and other war profiteers. But when pressed to discuss the ideas behind the songs that made him famous, Dylan was either flirtatiously evasive or plain old mean. "I've got nothing to say about these things I write, I just write 'em," he sneered during an infamous exchange with Time magazine. "I don't have to say anything about them. I don't write them for any reason, there's no great message."

It is at this point redundant and probably boring to note that Dylan first outraged his audience by "going electric" in 1965. This has been well covered in every piece of Dylan hagiography out there, and is certainly one of the clearest examples of him giving zero shits about what people want and expect from him. This lack of regard for critics and, often, his audience is an essential part of Dylan's mystique. It has also led to a lot of iconic moments (his, "Play it fucking loud!" is probably one of the coolest things that has ever happened in rock history, but also, possibly, ever) and a lot of good records.

"My Back Pages" strongly hinted at the political and musical departures in store for Dylan, but "Bringing It All Back Home" and "Highway 61 Revisited" still blindsided fans who wanted him to churn out some variation of "With God on Our Side" for the rest of his career. And when the public finally settled into loving the shithead rock 'n' roller poet version of Dylan, he changed again, going full earnest in "John Wesley Harding" and "Nashville Skyline."

Dylan, from the very beginning, has been telling us not to trust him as a role model. He almost seems to delight in showing us, again and again, not to expect admirable things from him. (Remember how mean he was to Donovan in "Don't Look Back," for seemingly no reason?) He is worth an estimated $80 million; starring in a Super Bowl ad and licensing his song to another (in addition to previous commercials he's done for Victoria's Secret and Cadillac, and countless other licensing deals in movies and television) have only made a very rich man much, much richer.

We can be critical of Dylan, the aging rich man. We can be critical of him for statements he's made framing the racism experienced by African-Americans in magical realist rather than structural and institutional terms. We can call him out for throwing his name behind an automaker with an ugly record with its workers, just as we can and should any other public figure who makes public choices.

But to be disappointed in Saint Bob Dylan for these things, as if he is some unique category of person with identifiable political allegiances, is to ignore the man behind the artist. I do not look to Dylan for guidance on my politics. He has told us over and over again not turn to him for meaning. He was a figment of our collective imagination almost from the start. He seems comfortable there.

Super Bowl Bob Dylan is not "It's Alright, Ma (I'm Only Bleeding)" Bob Dylan or any of the Dylans before or in-between, but there is room enough for all of them.