Ailes and O’Reilly channel the white backlash in a country trying to become a multiracial democracy. That’s scary 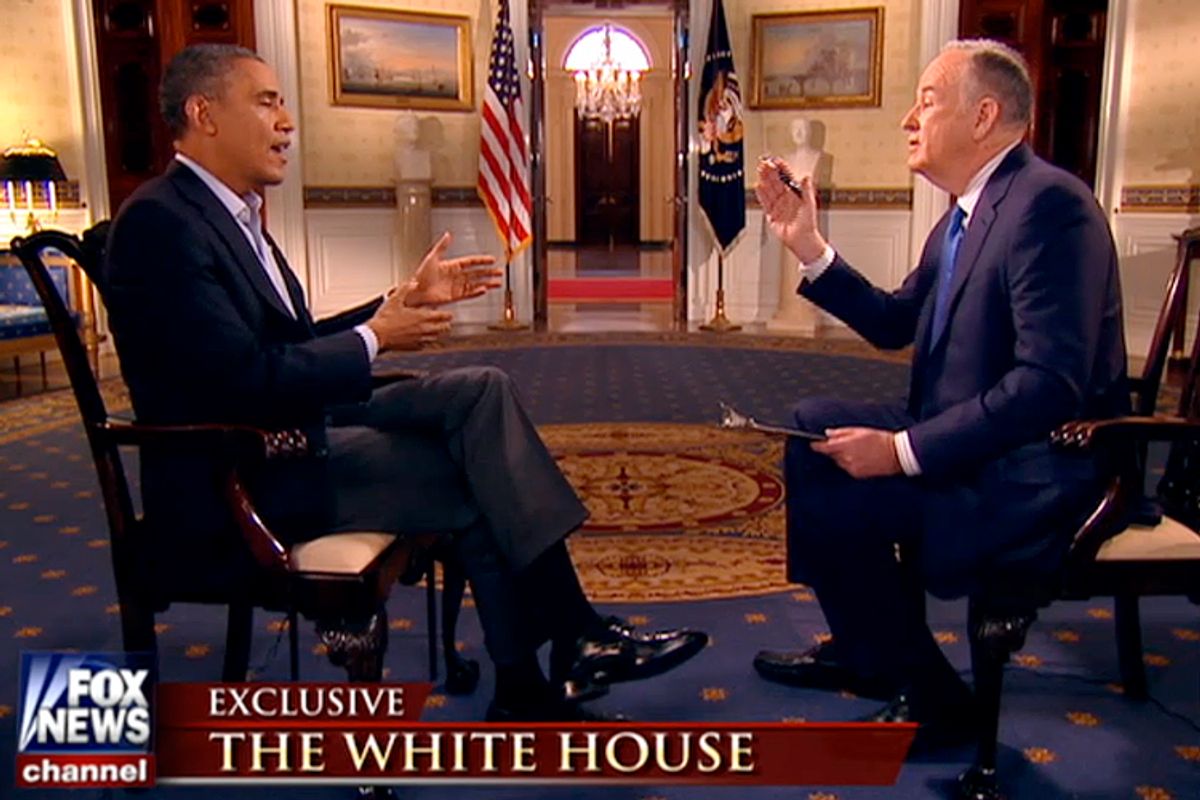 I want so much to believe Frank Rich is right when he declares that Fox News is dying, kept alive mostly by the sustaining life support of liberal outrage. The average age of Fox viewers is now 68, Rich notes (as opposed to 60 for MSNBC and CNN), making it more like “a retirement community” than a titan of the American political landscape. Rich almost had me convinced that if Fox boss Roger Ailes couldn’t drink the tears of liberals, he would die of thirst, and Fox would cease to matter.

Watching Fox’s Bill O’Reilly interview President Obama before the Super Bowl last night, you could find evidence for Rich’s view. Obama seemed calm and sane, while O’Reilly appeared unmoored from reality, like a patient who’d gotten a day pass from a sanitarium where delusional convalescents babble about Benghazi and the IRS and the Obamacare website until someone comes and puts them to bed.

But I thought the sit-down mainly showed Fox’s enduring hold on the political culture, which it is giving up no time soon. Consider the spectacle of a buffoon like O’Reilly, who had flailed away in a marginal television career until Ailes matched his talent for bullying with the Fox audience’s appetite for same, getting to grill the world’s most powerful man on Super Bowl Sunday, which is for better or worse America’s secular national holiday.

It’s simply stunning: Longtime Republican imagemaker Ailes figured out how to make sure that our twice-elected Democratic president, backed by a coalition that represents an emerging, multiracial America, must periodically be checked and hopefully shamed by a representative of the angry right-wing white male minority that barely considers him a legitimate leader.

It’s easy to laugh off the O’Reilly interview. From the perspective of liberals, and we’re right about this, Obama cleaned O’Reilly’s clock, answering his every question with clarity and the occasional appropriate edge of impatience. This Benghazi exchange was my favorite, and kind of typical of the night:

“Your detractors believe that you did not tell the world it was a terror attack because your campaign didn’t want that out,” O’Reilly insisted. “That’s what they believe.”

“And they believe it because folks like you are telling them that,” Obama shot back. He said later, “These kinds of things keep on surfacing, in part because you and your TV station will promote them.”

In one exchange about a story that has already been widely debunked, O’Reilly asked Obama why IRS head Doug Shulman had visited the White House 157 times, a staple of right-wing fantasizing about that IRS “scandal.” Supposedly Shulman was coming to the White House on the regular to plot with Obama how to take down the Tea Party. Except the Atlantic almost immediately debunked the claim last year: Yes, Shulman was “cleared” to visit 157 times – for meetings on a range of issues from the Affordable Care Act to financial reform – but he only actually attended meetings there 17 times, and never with Obama or anyone high in his administration. That’s what O’Reilly used his 10 precious minutes with the president in prime time to ask about.

You couldn’t help thinking of election night, when Karl Rove wouldn’t let Fox declare Obama the winner over Mitt Romney, because he had convinced himself along with the Fox audience that the incompetent and unpopular president could not possibly win. The folks inside the Fox bubble hurt themselves, because they don’t see reality until it bites them in the ass. That’s what gets you Bill O’Reilly babbling to the president about nonexistent controversies and asking questions that were answered months ago.

And yet I found the whole thing profoundly depressing. Maybe the worst part was when O’Reilly asked a viewer’s question: "Why do you feel it's necessary to fundamentally transform the nation that has afforded you so much opportunity?" O’Reilly presumably got lots of suggestions from viewers, and I’m sure many were uglier than that. But what does it mean that that’s the question he chose?

It means, again, that O’Reilly and Ailes and their viewers see this president as unqualified and ungrateful, an affirmative action baby who won’t thank us for all we’ve done for him and his cohort. The question was, of course, deeply condescending and borderline racist. Obama has been afforded “so much opportunity”? What about O’Reilly, who pretends he’s a working-class son of Levittown, Long Island, when he’s actually the kid of an accountant who grew up in Westbury and went to private high school and university?

This notion that an older generation of white people worked hard for everything they achieved, while a younger generation of folks like Barack Obama had their success handed to them, is a staple of the white backlash that Ailes has been channeling since he helped elect Richard Nixon in 1968. Having just finished Gabriel Sherman’s Ailes biography, “The Loudest Voice in the Room,” I watched the O’Reilly interview with the sinking feeling that our nation, while fortunate in so many ways, has been uniquely challenged in this crucial time: As we make the transition to a fully multiracial democracy, our leading cable news network is headed by a man who has spent his entire career channeling his own paranoia and resentment and weird racial ideas. Oh, and sexism.

Unbelievably, O’Reilly got his sit-down with Obama the same week that the RNC’s Reince Priebus threatened to boycott MSNBC over a mildly lame tweet tweaking “rightwingers” about that lovely Cheerios ad – and naturally, MSNBC apologized. That’s became MSNBC is a business, while Fox is a political machine that also happens to make a lot of money (because it serves the side of the aisle where most of the money is).

Fox doesn’t apologize. Its hosts just scream “Benghazi!” louder. Obama’s insubordination inevitably became just more grist for Fox programming. The dolts on "Fox and Friends" are very, very angry that the president blamed their network for scandal-mongering. "Bill Clinton didn't blame the New York Times for his scandal,” Brian Kilmeade told his sidekicks. “George Bush didn't blame every media outlet for running down the war or for Katrina. Why attack the people who are asking you questions?"

Thanks in large measure to Roger Ailes, we live in a country now where a carnival barker with an ugly comb-over can make the duly elected president show him his papers, and an angry mediocrity like O’Reilly can condescend to an accomplished black man who is in fact his moral and intellectual superior.

Maybe more important, day to day Fox provides a steady infusion of toxic lies into our political bloodstream, from tales about “victims” of Obamacare who could in fact be helped by it, to fantasies of neglect and incompetence at Benghazi that in fact shame the memory of the men who died there. Politically, we are all the sicker for it.

So if progressives want to believe that Fox is history because its viewers are getting old and its hosts are getting crazier, that’s their choice. I was always told dying animals can be the most dangerous. A reactionary national minority that controls gerrymandered House districts and a loud conservative cable network, in a political system that gives a lot of power to minorities to begin with, can do an awful lot of harm before it ages into that great retirement community in the sky, where Dwight Eisenhower is still president. I hope I’m wrong, but I don’t think Fox News will stop being a powerful and corrosive force in American politics any time soon.