Give the Cheerios interracial family their own show!

It's great to see interracial families in ads, but when will more such families get featured on actual shows? 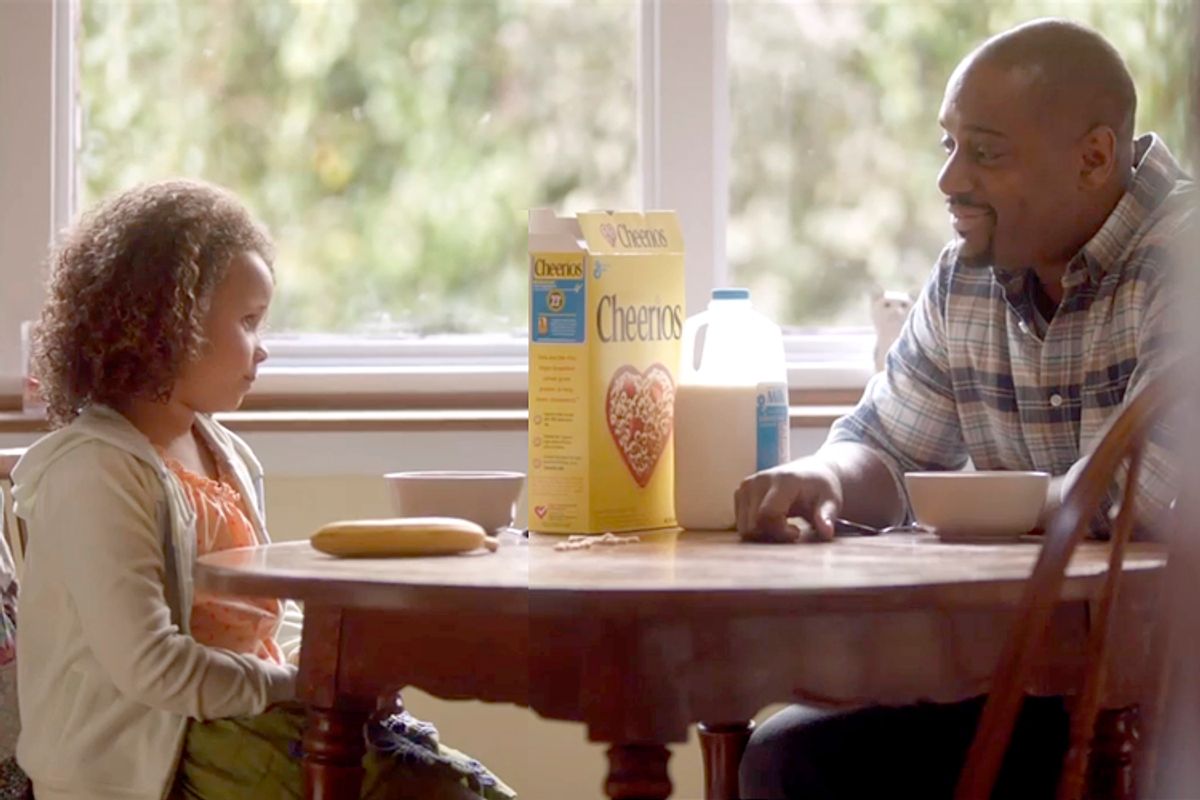 On Sunday afternoon, after making an emergency trip to the Apple Store, I found my husband and two daughters waiting for me at the indoor playscape in the mall. My eldest daughter had a shiny, star-shaped sticker on her hand, which hadn’t been there before. “She got it from a modeling scout,” my husband informed me.

We’ve been married a long time; he knows which things are likely to trigger a strong reaction on my part. He wasn’t disappointed this time. “What?” I exclaimed. “Are you serious?”

“Yes, she gave stickers to both of them. She said, ‘Oh, my goodness, you’re such beautiful girls! Would you like a sticker?’ And then she asked me, ‘Have you ever thought about having them model? Did you know they can earn scholarships?’”

There is no way either my husband or I would want our daughters, currently aged 5 and 3, to become models — not even for “scholarships.” I also found myself wondering why they had been approached in the first place. While I believe that our kids are among the loveliest on the planet, I had a feeling the scout had homed in on them at least in part because of their ethnic background. I’m Korean, and my husband is Irish and Lebanese — which, we have been told more than once, is “a great combination!” “Ethnically ambiguous people are very in right now,” an acquaintance who works in advertising told me a couple of years ago. “Everyone wants kids who look like yours in their ads. That way the spot can appeal to the largest possible demographic.”

After that revelation, I began looking more closely at the people in television commercials. My friend was right: While actors of all backgrounds were represented in TV ads, there were a surprisingly large number who appeared to be of mixed, biracial or multiracial heritage. Last year, a Cheerios ad featuring a multiracial family—with a black father, white mother and adorable biracial daughter named Gracie — earned the praise of fans and the venom of racists. I was especially struck by the ad because it paired a white woman with an African-American man, as opposed to the more common (on television) pairing of white man plus woman of color. During this year’s Super Bowl, Cheerios aired a follow-up ad, equally heartwarming (or upsetting, if you’re racist), featuring the same family.

Whatever the “combination,” I always want to identify with interracial couples and their families; I see parallels between their experiences and ours. At a party last year, my husband and I spent over an hour venting with other interracial couples in attendance about some of the more outlandish questions and remarks we’ve received regarding our families. It was a relief to talk with other people who understood. Yet underlying our jokes and our laughter and our commiseration, there was a persistent sense of worry—about what our children will think and feel and say when they are old enough to field such comments themselves. And how we’ll help and support them in their own positive identity development when families like ours are common, but still not the norm.

As happy as I am to see interracial families and multiracial children featured in television ads, I have to wonder: Where are the families and children like ours on actual shows? Eventually they will both absorb enough pop culture to realize that the vast majority of the families they see on screen do not look like ours. Some might view biracial and multiracial children as potential models, useful to companies hoping to sell products to “the largest possible demographic,” but will my daughters see themselves represented on TV programs any time soon? Or will they feel ignored, erased, invisible?

Last year, after the first Cheerios ad aired and riled up bigots everywhere, Roxane Gay wrote about why interracial families on commercials matter: “It has been really comforting to see so many interracial families and families of color being represented, being seen. That comfort rises out of seeing more evidence, on television, of the world as it really is, not hopelessly trapped in how it once was. Clearly, a commercial is just a commercial, but we shouldn’t dismiss the importance of inclusion in advertising. When advertisers ignore diversity, it is because they don’t think the lives of others matter.”

The ads are wonderful, but what should we conclude when networks fail to create inclusive shows and films—media that reflect the full diversity of American families, and the experiences of interracial couples and their children? Do the stories of biracial and multiracial children and their families matter to them beyond the ability to sell ad spots for cereal, cleaning products, and cute clothes? The Cheerios commercials prove that a 30-second ad spot can be important, it can be powerful, particularly for those who don’t often see their lives or their experiences honored or represented in popular culture. Imagine how much more it would mean to watch an entire show, week after week, centered on such a family. In her piece last year, Gay rightly noted that interracial relationships on television shows are more prevalent than they once were—but there is still a long way to go. Maybe we could start by giving Gracie and her parents their own show? I’d watch.