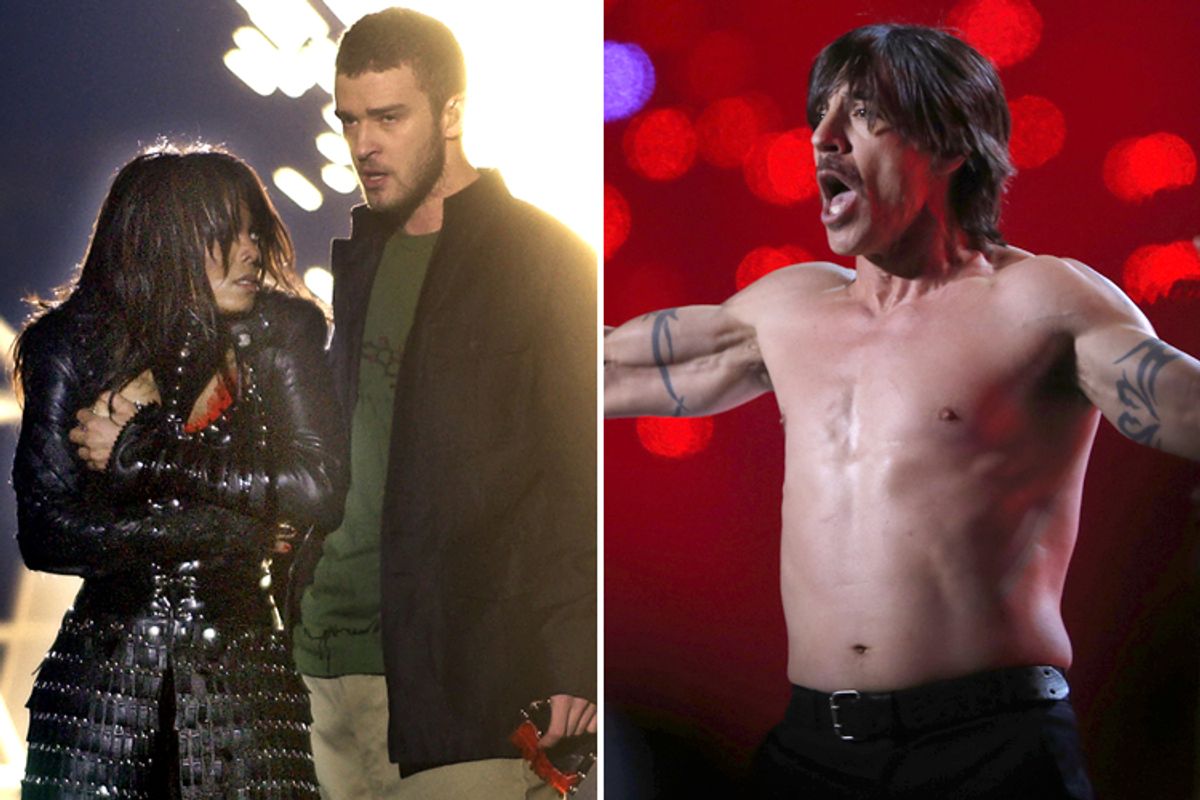 The Sunday Super Bowl halftime show was a festival of toplessness. There were nipples cavorting all over the damn stage. Yet unlike the nationwide hysteria that a flash of flesh caused a decade ago, when Janet Jackson experienced the nip slip seen round the world, this recent performance was greeted with cheers that the artists "brought down the house," "bringing us to our feet with … shirts off and all." It's good to be the Red Hot Chili Peppers. It's good to be a bunch of men in their 50s.

When Anthony Kiedis and Flea strutted on a New Jersey stage with Bruno Mars, belting out their classic "Give It Away," they did it in the same manner they have performed throughout the band's 30-year career: as close to naked as possible. Undaunted by the cold Northeastern winter air, unself-conscious about being firmly into their 50s, the band mates seemed to sending a very clear message to the world. And that message was, "If Iggy Pop doesn't have to put on a shirt yet, we're not putting on shirts yet either."

Their performance earned a few snarky online comments about their age, but for the most part, it was praised for its integration into Mars' set, and the way the band "powered through" their own ferocious hit. It certainly didn't erupt into a deluge of breathless television debates or any frantic, "What about the children?" hand-wringing. And its total lack of controversy might not have been notable were it not in such stark contrast to what happened back in 2004.

In a Super Bowl event still so sensitive that a recent ESPN story on it had to come with a warning about "mature subject matter and language," the then 37-year-old Janet Jackson – already no stranger to the joys of going shirtless -- found her nipple unleashed and the country reeling in SHOCKHORROR. The slip came near the end of her halftime performance, during a duet of "Rock Your Body" with Justin Timberlake. "Gotta have you naked by the end of this song" he purred, and then he reached across her front and pulled at breakaway part of her costume, revealing a starburst pierced nipple. She looked momentarily started, clasped her hand to her breast, and the show was over.

Was it a planned act of deliberate provocation? An unfortunate "wardrobe malfunction"? It's a debate that rages on still. Whatever conspiracy theories you subscribe to, the facts of the fallout are clear. A lifetime's worth of outraged television punditry and editorializing ensued. Sen. Zell Miller called it "a show brought to us courtesy of Value-Les Moonves and the pagan temple of Viacom-Babylon." Jackson's career would be defined hence for her involvement in "nipplegate." Though she still holds plenty of records for most searched Internet terms and video views, her career has never recovered. Right after the 2004 Super Bowl, she was banned from a Grammys appearance, and her career has faltered ever since. Meanwhile, as ESPN recalls, "The league decided that MTV would never again be involved in a halftime show." The FCC initially fined CBS, the network that had carried the Super Bowl, a record $550,000. The case dragged on in court for eight years.

An overtly racy, striptease tinged routine is different from a bunch of dudes pretending that it's not 40 degrees outside. Nevertheless, the fury and the shaming and the permanent career damage that can happen when a woman briefly exposes her breast remains wildly out of proportion to the complete and total lack of consequences when men decide to strip down.

Our culture's insane, overblown fixation on that part of female anatomy hasn't evolved in the 10 years since Justin Timberlake tore at Janet Jackson's sleek black costume. Just in December, Miley Cyrus set off a wave of controversy for supporting the filmmakers of "Free the Nipple." Entire HuffPo verticals are devoted to fleeting glimpses of celebrity areola. Female nudity is treated as obscenity in movies to a degree that violence rarely is. Breast-feeding women are shooed out of stores that peddle sexy lingerie. Women's bodies are still regarded as shameful, and the repercussions for women who transgress are severe. The only things that's changed is that 10 years on, no one will bat an eye if you show up shirtless at the Super Bowl, just as long as you're a middle-aged man.