What we can learn from Philip Seymour Hoffman

He was a great teacher and student of acting and life, and his legacy may be to remind us the value of curiosity 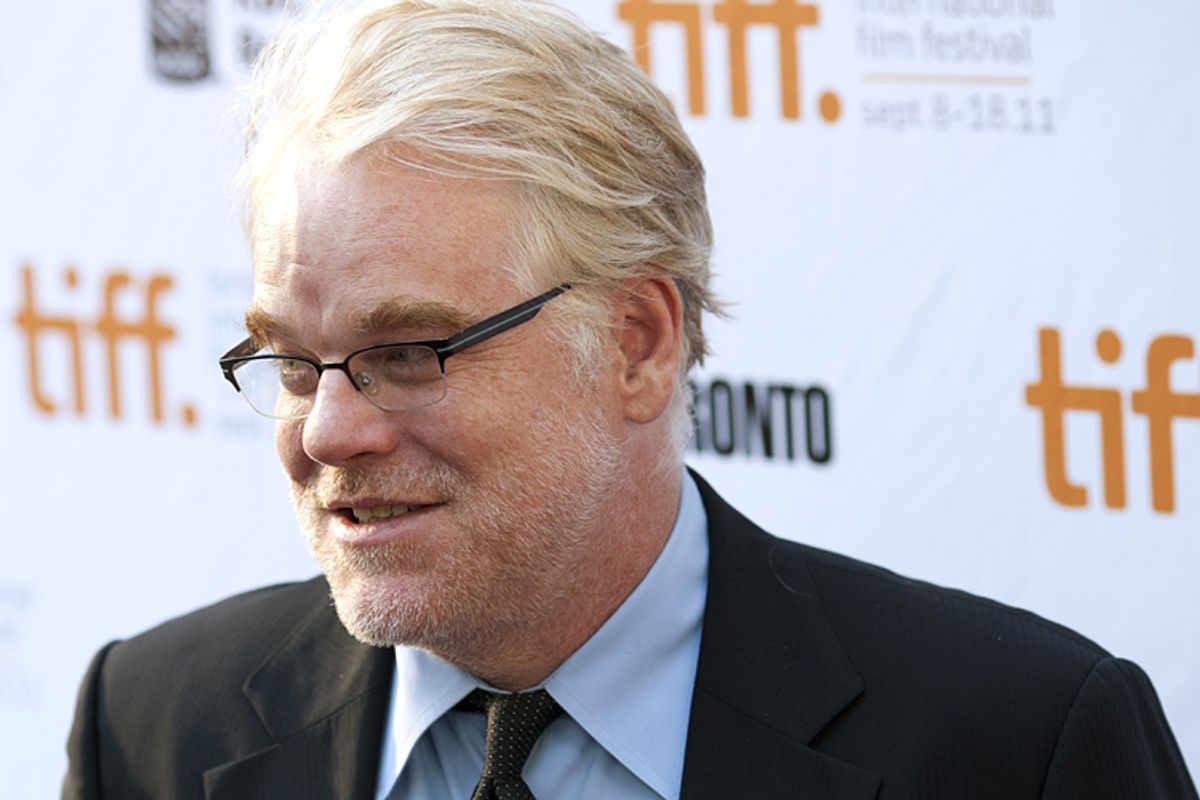 The first time I noticed Philip Seymour Hoffman in a movie I cringed.  Watching his performance made me sympathetic and uncomfortable at the same time.  I was in college, the Sundance Revolution was in full swing, and Paul Thomas Anderson had written this beautiful character, Scotty, a genuinely fearful soul who was afraid of himself, afraid to be himself.  Hoffman embodied the closeted porn P.A.  The choices he made with this fragile character allowed me to connect with Scotty’s personal hell of fear – fear of being outed, of being gay, of not being loved, of being rejected.  I wanted to hug him and tell him everything would be OK.

Hoffman was brilliant in "Boogie Nights." It was a rock of a performance and, upon that rock, Hoffman would continue to build a truly fascinating career.  He had a gift for playing those most afraid and vulnerable among us, tortured by the internal fears of living.  It wasn’t that he took challenges, or so-called risks, but that he was simply great at his job – reflecting the complexity and messiness of simply being human, and doing it with humility and honesty.

He brought a pure humanity to his work. That humanity, a seeming rarity among actors, was his gift.  It allowed him to give so much of himself -- all of himself.  Each performance was a selfless act and, the better his performance, the more of himself he gave, once calling the process “torturous.”

Hoffman had a unique ability to play what many called “tortured souls.” However, the choices he made with each character – finding and exploring their humanity, bringing integrity and respect to who they are, without judgment or reservation – are the same tortured choices we make as people every day. And because he chose to explore the beautiful torment of living (the insecurities, the self-doubt), he was attainable. You always knew the guy he was playing, whether he was a lonely neighbor who gets off on making lewd phone calls to women, a drag queen building a friendship with the most unlikely of friends, or a diffident limo driver trying to learn something new to impress a girl.

He said that, from a young age, he struggled (as most people do) to understand the human condition – struggled to “connect” with people, to comprehend sexuality and to resolve personal feelings of inadequacy. It was this struggle that would inspire many of his choices as an actor.

Hoffman committed to solving the puzzle of each character; he resisted compromise; he shunned vanity and fame-seeking as a harmful distraction to performance; he was obsessed with the nuances of each performance and was able to share the privacy of his process and intuitions with the world, baring himself for us.  Yet few actors of this ilk can maintain the volatile emotional intensity that comes with acting and live everyday life unscathed.  It can be very lonely.  It can be hell.  “Hell? That’s where I live,” Hoffman said.  He also pointed out that "just because you like to do something doesn't mean you have fun doing it … I think that's true about acting."

While some people will likely call Hoffman an “actor’s actor” or a great “character actor,” I think he was something more.  Hoffman was a student, and a teacher, of life.   He was always studying, learning and seeking to understand what it meant to be human. And he took what he learned and extended it to us with every performance, teaching us about the perfect imperfections of what it means to be alive. Of course the difficult thing about being both a student and teacher of life is actually living life at the same time. Perhaps this was his greatest struggle, a struggle from which he sought refuge.

Ironically, he often sought refuge from making the very films for which many of us will remember him.  And he would find that refuge in the theater. Following a sports injury when he was 12, Hoffman said he made a pact with God that he would no longer play sports. It was this pact that led him to acting, and to the theater, which became his home, his church. He boasted that, “A good sermon is just like theater.”

While film was how most people got to know Hoffman, the theater was where he got to know himself.  It was where he was most alive and where he could live the full experience of a character without breaks and marks and boom mics.  And it was in front of an audience where he said he felt most open, exposed and most connected to other actors, as he believed that performance is a living thing, and also something intimate and symbiotic between two actors. He was known to approach performance with a serious sense of purpose and to push his fellow actors (but refrain from competing with them), opting to challenge them by enveloping himself in the characters he played.

Many actors (and directors, producers and writers) who are trying to create their own paths could learn a lot from Hoffman. He thought the best rehearsal an actor could have was to build relationships with writers and directors on projects, over time – long before filming ever began -- taking an active role in the evolution of his character and, subsequently, of the film.  He believed an actor should be more than "just a gun for hire.”  He understood that, while acting isn’t difficult, “doing it well is difficult,” and that doing it well was worth taking on the arduous challenge of doing so, resisting the ease of not caring or of walking away. And, above all, he thought actors should approach what they do with humility and purity -- an approach he believed would free them from their own personal fears and insecurities, allowing them to put that energy into their performances.  He once told Andrew Garfield (while they were working on "Death of a Salesman" together in 2012), “Whatever you dig, whatever you respect, chase that, and if it happens to make you a bunch of money, that’s fine, and if it doesn’t, that’s also fine.”

His humble approach to acting made him unique – it allowed him to watch his own movies as a spectator, to not see himself in his characters, but to see his characters as real people.  And he sought out work that would allow him to act out life’s subtleties, to make people real. He once said, “That’s what I look for in my work: when a writer can deftly describe the human experience in a way that you didn’t think could even be put into words. That doesn’t happen often, but it gives me something to play inside. Too much of the time our culture fears subtlety. They really want to make sure you get it. And when subtlety is lost, I get upset.”

The work he sought, and the way that he played the parts, granted him a freedom to be no one and anyone.  It allowed him to indulge in his curiosities.  Meryl Streep said that, like her, Hoffman was “curious to the point of being nosy.” They shared an eagerness to “devour” the lives of their characters, not only to wear their shoes and their clothes, but to wear their skin – to know everything about them in order to solve the mystery of who these people were.  Perhaps a legacy of Hoffman’s is to remind actors of the necessity and simple genius of curiosity.

Beyond his films and his family, Hoffman also leaves behind an artistic community that was very dear to him.  He dedicated many years working with, training and challenging young actors at the Labyrinth Theater Company, inspiring members to be supportive of each other, to take risks and to own the value and potential of what they do.  And it is through many of these actors, writers and directors that Hoffman’s contribution to his craft will endure.

Ultimately, Philip Seymour Hoffman spent his life learning, and teaching, the important lesson that what you are is enough.  And the lives of us who were touched by his life are the better for it.  “In the end," he said, "I’m grateful to feel something so deeply, and I’m also grateful that it’s over.  And that’s my life.”