The oil conglomerate is claiming injuries from a satirical video 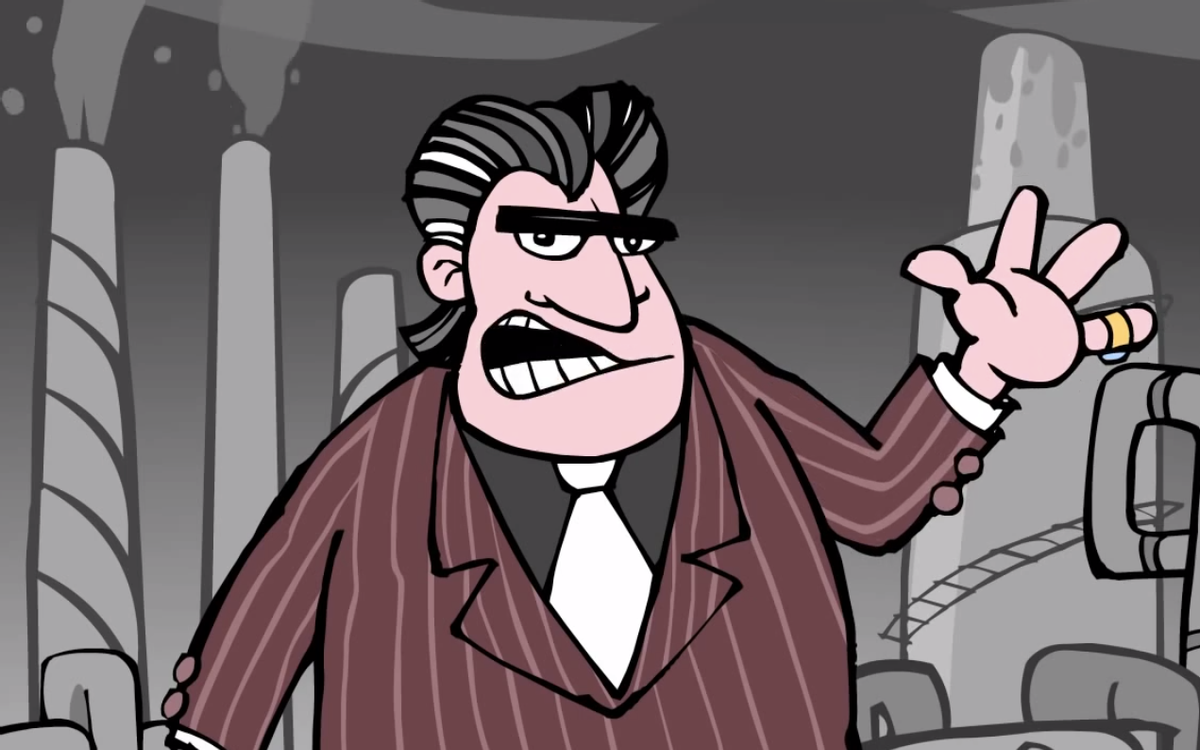 How desperate is Chevron to get out of paying billions in damages for oil contamination in Ecuador's rain forest? Very, according to Mark Fiore. The Pulitzer Prize-winning political cartoonist claims the company has filed court documents over a satirical video he made in conjunction with the environmental nonprofit Amazon Watch.

The papers, which Fiore posted yesterday to his personal blog, accuse defendants of having "unleashed a barrage of near-daily press releases, letters to government officials and shareholders, web videos, and cartoons in an effort to extort a payoff from Chevron." According to Fiore, this is the cartoon in question:

In an article for Earth Island Journal reposted at Salon, Jason Mark explained the problem with Chevron's strategy to countersue the victims of its own pollution -- or, as Fiore put it in the video, to "RICO their ass":

...some independent observers also have expressed concern about Chevron’s legal tactics. Most worrisome is Chevron’s use of RICO — the Racketeer Influenced and Corrupt Organizations Act — against Dongizer [the lawyer representing the Ecuadorians harmed by the oil spill]. RICO is used most commonly to prosecute mafia figures. Some lawyers and legal scholars say that employing RICO against a plaintiff attorney could set a dangerous precedent.

Susan Bozorgi, a Miami-based criminal defense lawyer, told Newsweek that she worries about what it will mean if Chevron wins: “[RICO] was meant to be used against the mob. The danger about a case like this is that it could send a message to a lawyer who wants to take up a cause for an underdog that Big Brother, the big corporate entity, is going to start coming after you for criminal conduct.”

UC-Hastings law professor Roht-Arriaza said to me: “I’m not a RICO expert, but I don’t know of any case that involves the behavior of companies abroad, where the company has turned around and sued under RICO. Chevron has been sued before, but they haven’t done this, even when it looked like things weren’t going well for them.” She continued: “It’s interesting the number of levels on which Chevron is fighting back. They are not only doing this, they are also bringing all of these arbitration cases, basically trying to say that the Ecuadorian court shouldn’t have brought any judgment.”

Chevron, by the way, is being represented by Randy Mastro, whom Chris Christie hired last month to clean up his own mess.