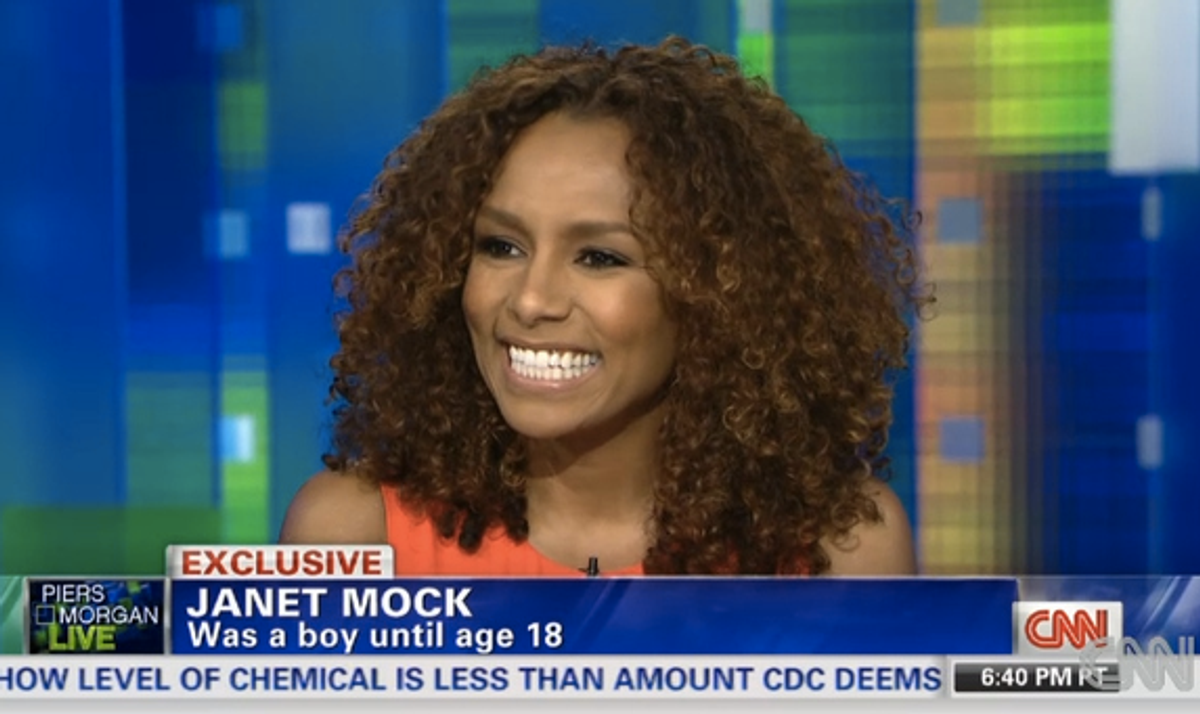 Janet Mock is a journalist, an activist, an educator and a published author with a new book to promote.

But here is the main thing you need to know about Mock, according to the caption below her name during a Tuesday appearance on CNN's "Piers Morgan Live": "Was a boy until age 18." (In her criticism of the segment, Mock rightly called this on-screen line “reductive thinking about gender" that suggests "only until I got the surgery, then I was a woman.")

Mock was there to discuss her new book, "Redefining Realness," but Piers Morgan wasn't much interested in thoughtfully discussing her personal and professional journey as a trans woman of color or her advocacy. Morgan, like Katie Couric and other journalists covering trans* issues, was primarily interested in Mock's anatomy and transition.

"This is the amazing thing about you," Morgan begins the interview. "Had I not known anything about your story, I would have absolutely not a clue that you had ever been a boy -- a male. Which makes me absolutely believe you always should have been a woman."

After that tone-deaf opener, Morgan's questions only became more sensationalist.

When discussing Mock's current partner, Morgan asked, "When you had told these [other men you have dated] 'the news,' did some of them run a mile? Did others surprise you by being very supportive? I mean, how did men react?"

"I think disclosure is frightening for anyone that's telling anyone about their past," Mock thoughtfully responded. "For me, I think the through line there is we're all looking for someone to love us fully for who we are. Not despite of ourselves but because of ourselves."

After the interview aired, Mock and others criticized Morgan for his handling of the segment.

"[Morgan] doesn’t really want to talk about trans issues, he wants to sensationalize my life and not really talk about the work that I do and what the purpose of me writing this book was about," Mock told BuzzFeed Tuesday night.

"They’re not talking about my advocacy or anything like that, it’s just about this most sensationalized … meme of discussion of trans women’s lives: ‘We’re not real women, so therefore if we’re in relationships with men we’re deceiving them.’ So, it just feeds into those same kinds of myths and fears that they spread around, which leads to further violence of trans women’s bodies and identities.”

Parker Marie Molloy, a writer and activist, pointed out on Twitter that the ignorance of Morgan and others is more than just offensive -- it creates a climate in which trans* people are wary about speaking publicly, or doing mainstream press for fear of this kind of dehumanizing treatment.

"I honestly wonder how many trans people have intentionally hidden from doing things, accomplishing goals that might have put them in the spotlight for fear of being treated like a sideshow by the media. How many novels, inventions, works of art weren't created because of this kind of media violence," Molloy asked.

And as Laverne Cox recently explained, the media's fixation on transition denies the humanity of trans* people.

"The preoccupation with transition and surgery objectifies trans people. And then we don’t get to really deal with the real lived experiences," she said during a recent interview with Couric. "The reality of trans people’s lives is that so often we are targets of violence. We experience discrimination disproportionately to the rest of the community. Our unemployment rate is twice the national average; if you are a trans person of color, that rate is four times the national average. The homicide rate is highest among trans women. If we focus on transition, we don’t actually get to talk about those things."

But rather than engage with his critics, Morgan dismissed them.

"So ... I try and highlight @janetmock 's inspiring story and she & her supporters respond by trashing me. Really disgusting," he tweeted after being called out for his conduct. Then he issued a petty threat, warning Mock, "I'll deal with you tomorrow night on air @janetmock -- never been treated in such a disgraceful manner. Be proud."

Mock, however, expressed optimism about the power of social media to act as a corrective to the mainstream media's ignorance.

“That’s the special thing about social media now is that we can talk back," she told BuzzFeed. "Piers doesn’t have the final say. And we read him,” she said. “Our media is just as valid. What we create ourselves, with that one Twitter picture."

You can watch the segments here.