Rand Paul's monetary fear-mongering debunked: "What’s his story where the Fed goes under?"

Leading economist counters the senator, and explains how Janet Yellen can attack unemployment and avert a crisis 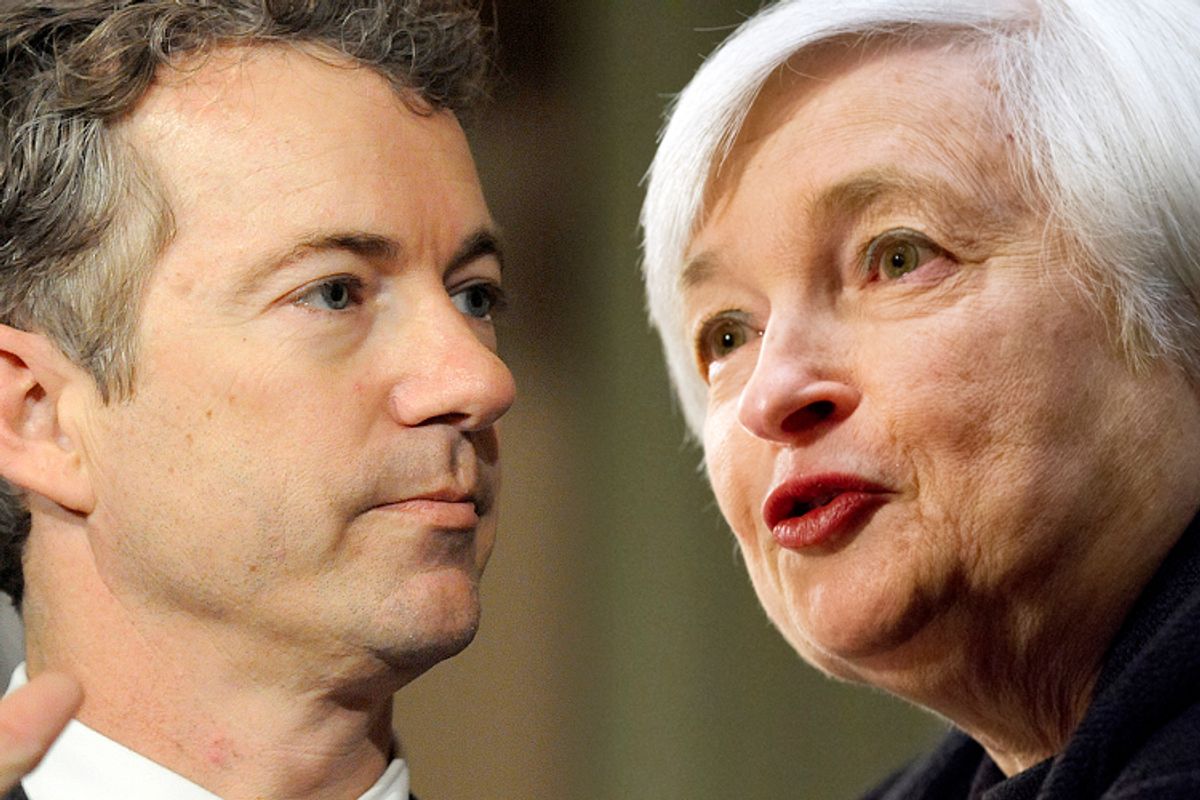 The night Janet Yellen was confirmed -- with an unprecedented 26 votes in opposition -- to take the reins at the Federal Reserve, Sen. Rand Paul took to the floor to accuse the Fed of "laundering money from the American people" and warn that "the once proud dollar that was once backed by gold ... is now backed by used car loans and underwater mortgages." Citing an author calling the Fed "insolvent," Paul told the Senate he was "concerned that we have papered over the problems in a sea of new currency."

This week, Yellen officially took the helm at the Fed, becoming its first female chair and the first new chair in three decades appointed by a Democrat. To assess right-wing warnings and consider what Yellen could and should do next, Salon called up economist Dean Baker, who co-chairs the progressive Center for Economic and Policy Research and co-authored the new book "Getting Back to Full Employment: A Better Bargain for Working People." Baker argued the U.S. should take a page from Japan on unemployment, urged a push to “encourage the big banks to break themselves up,” and dismissed Paul's dire warnings and gold standard nostalgia -- but condemned the banks' outsize role at the Fed. A condensed version of our conversation follows.

When we talked prior to the nomination, you said that on the regulatory side it just wasn’t clear what approach she would bring, but that it did look like “she’d be prepared to be fairly aggressive in pursuing expansionary monetary policy.” How much more do we know now?

She’s made a couple comments here and there … I think we’ll really just have to see [on regulation]. I mean, obviously she understands the issues generally …  She understands what’s at stake …

[Wheareas] Bernanke, for the most part it was clear where he was coming from: He was prepared to let things stay as they were, pretty happy with the status quo …

We had the born-again [contender Larry] Summers … Obviously in times past he was totally for deregulation. Word is he had changed, who knows?

Again, I think it’s still too early to tell where’s she’s going to come down.

I think their view – and I don’t know if I agree with it, but at least I’m sympathetic to it -- was OK, why create a problem for ourselves on stuff [when] we know we’re going to have to pull back these reserves at some point?

… They’ve made more of a focus of forward guidance, saying we’re going to keep the federal funds rate at zero through 2015, 2016, making this really clear – at least that’s what they’re saying now. And the hope is that the markets internalize that and act accordingly.

If the Fed were unified, what should it be doing at this point?

I’ve been struck by the experience in Japan. I’m not going to say it’s glowing success, there’s room for doubters, but it does certainly look to be working-… I don’t see a downside of trying it

You’ve mentioned that Yellen has a potential advantage, in terms of the internal politics of the Fed, in having served there for as long as she has. What’s your sense of the political constraints or the political opportunities she has in terms of getting majority support?

My guess is if she were to propose something like targeting a higher rate of inflation, she’d have a hard time, because I think that sounds like a radical concept to a lot of people there … Which doesn’t mean she could never do it. You do have people like [Charles] Evans in Chicago who sounds pretty aggressive, like he’s very committed. So I wouldn’t rule that out. But she would have to lay a lot of groundwork to be able to do something like that …

And I don’t know if you want to do that unless you’ve got something close to unanimity -- because the important point is that you convince the markets that this is Fed policy.

When Yellen holds her first press conference next month, what do you think she should be asked, and what kind of signal or what kind of message should she put out there?

On the macro side: Does she see a risk of being too expansionary? … At this point at least – not to say for all points, but at this point -- for the Fed it’s really just a one-way risk: That, you know, we aren’t doing enough, and therefore the economy’s weaker, unemployment’s higher than it need be. But I’d like to see that asked of her. I mean, I understand she wouldn’t be as unambiguous as I’m being here, but it would be interesting to see her response.

And what are the key tests for Janet Yellen on the question of how she’s going to approach the regulatory powers of the Fed?

Well, certainly in enforcing the Volcker rule -- that is going to be front and center … Are they going to take, you know, a loose view of it, which is obviously what the big banks would like, and all sorts of exceptions? Or do they plan to take it seriously … bank holding companies are not going to be engaged in taking positions that are going to lead to large losses, the London Whale is not allowed …

She could take steps with … the Financial Stability Oversight [Council]. She’d have to bring them all on board … To, you know, penalize large banks. Basically to encourage the big banks to break themselves up. Whether she’s prepared to do that, to see them as risks simply because of their size.

What do you think the economic impact would be if she did?

Well, I don’t see a downside … The idea would be that we’d have a more stable financial sector, so we won’t presumably get more crisis – or, not that we won’t get any crises, but we won’t get anything like we saw in ‘08. And also, you know, should hopefully encourage the growth of small banks …

People sort of say, “Oh, if you want JPMorgan to break up, you want everyone to be a community bank.” No. You know, you could have banks that have assets of $25 billion, $50 billion -- plenty big banks. But now they’re operating at a serious disadvantage relative to the giants. And if you whittled the giants down to size, to where they no longer enjoyed the funding advantage, then we’d expect to see more, you know, midsize banks growing to take a larger share of the market.

Last month Sen. Rand Paul tweeted [a line from his floor speech:] “At $4 trillion, and roughly only $55 billion in equity, the Fed is leveraged about 77-to-1 ... An insane amount of leverage for any bank.” What do you make of that argument?

At the end of the day, the Fed … can in effect, you know, always print more money. I’m not really sure, like, what the risk is. You know, what’s his story where the Fed goes under? So I guess I don’t really understand what he sees as the risk here.

Do you think that kind of argument Rand Paul is making is intuitively compelling? Does it suggest something about the way that what the Fed is doing gets debated, or gets understood, or gets overseen?

Well, there’s a whole group of people -- and I think Rand Paul is in there, but I won’t necessarily shove him in there – who think the Fed is doing something horrible by printing money …

I’ve certainly encountered many people who yell about the debasement of our currency, and you know, “This is an attack on our rights,” and this and that, and the idea is that the Fed is doing something improper …

The whole notion of the central bank that prints its own currency requires something beyond the baseline understanding that you and I are in a barter economy … You fish and I grow wheat, and you trade your fish for wheat. And in that context, OK, where does someone come off printing money? You know, they’re going to make claims to your fish and my wheat. It sounds like we’re going to get ripped off. So it does require some backing away from kind of this narrow view that the economy is this kind of barter story -- where, you know, it’s just all of us individual producers -- to get a bigger picture of a macro economy …

In a context where your problem [is] the economy is weak because of a lack of demand, printing money can create wealth. But as I say, you have a lot of people in this country that have this view that the Fed is this evil institution that’s confiscating wealth from us fishers and farmers. And in that view, you know, printing money -- this is, you know, really evil. So that I think is the context. And again I’m not positive that Rand Paul is in that group – but I suspect that. But I think that is certainly a view that has a lot of adherents.

Congressman [Kevin] Brady has introduced a bill, with backing from several Republicans in Congress, several folks at the Cato Institute, to create a commission to evaluate “alternative monetary regimes,” including the gold standard. Is that good policy?

It’s not as if we went to the currency standard we’re on now just for the hell of it. The gold standard was leading to a pretty awful situation, where we had our monetary policy straitjacketed, and going off the gold standard in 1933 was, you know, really essential, to my view, [in] recovering from the Great Depression. I can’t imagine, if we had stayed on the gold standard and we got to World War II, I don’t really know what we would’ve done. Would we have raised taxes, doubled taxes, to pay for the war? You know, we couldn’t borrow …

The gold standard was tried and it failed … It didn’t work. Same for other countries.

So to my mind, this is, why don’t we re-debate whether the earth revolves around the sun, or vice versa?

Are there particular people in Congress who you think are playing a good role in holding the Fed’s feet to the fire on unemployment?

Bernie Sanders -- certainly he’s been very out front on that. You know, we’ll see if Elizabeth Warren does. Obviously she’s been more active on regulatory issues, but it wouldn’t surprise me if she does. Sherrod Brown to some extent …

Well, I think they should certainly press for them to have as expansionary policy as possible … It would be good for them to raise the idea of targeting a higher rate of inflation. One of the things the Fed plays a role in is, not unilaterally, but trying to get the dollar down. Because again, that is a big source of our unemployment … If you could knock down the trade deficit 2 or 3 percent points of GDP, that would be millions of jobs …

You do have other central banks that are quite actively openly intervening in the market. I mean, it always drives me nuts when people talk about “manipulating; it’s not like they’re doing it in the dark. They have a target for their exchange rate, and it’s not the market … the Fed, I think, can play an active role in that, and I think that would be an important thing for them to do.

How would you design the structure of the governance of the Federal Reserve?

But to actually give them a role in the governance, that’s really extraordinary … I would restructure it so that the banks have no direct role.