Too poor for pop culture

Where I live in East Baltimore, everything looks like "The Wire" and nobody cares what a "selfie" is 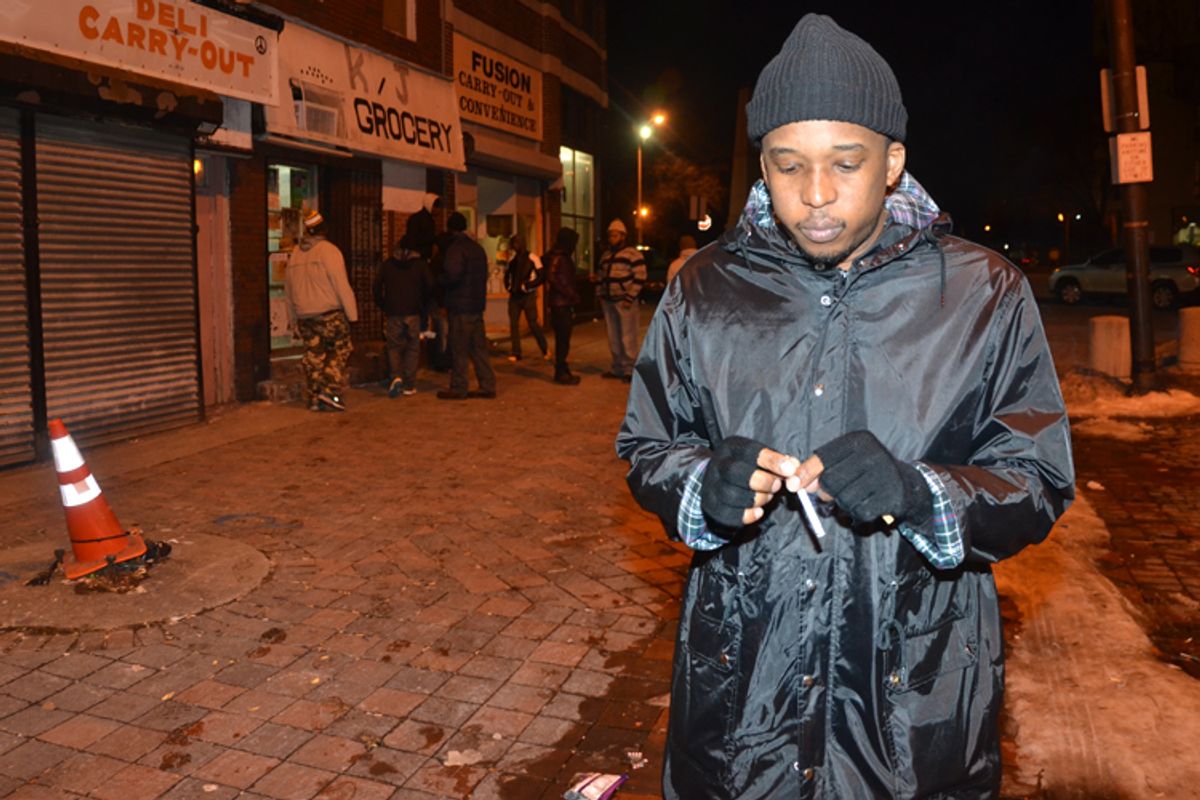 A photo of the author in East Baltimore (Dave Manigault)
--

Miss Sheryl, Dontay, Bucket-Head and I compiled our loose change for a fifth of vodka. I'm the only driver, so I went to get it. On the way back I laughed at the local radio stations going on and on and on, still buzzing about Obama taking a selfie at Nelson Mandela's funeral. Who cares?

No really, who? Especially since the funeral was weeks ago.

I arrived, fifth of Black Watch clenched close to me like a newborn with three red cold-cups covering the top. We play spades over at Miss Sheryl's place in Douglass Housing Projects every few weeks. (Actually, Miss Sheryl's name isn't really Miss Sheryl. But I changed some names here, because I'm not into embarrassing my friends.) Her court is semi-boarded up, third world and looks like an ad for "The Wire." Even though her complex is disgustingly unfit, it's still overpopulated with tilting dope fiends, barefoot children, pregnant smokers, grandmas with diabetes, tattoo-faced tenants and a diverse collection of Zimmermans made up of street dudes and housing police, looking itchy to shoot anyone young and black and in Nike.

Two taps on the door, it opened and the gang was all there -- four disenfranchised African-Americans posted up in a 9 x 11 prison-size tenement, one of those spots where you enter the front door, take a half-step and land in the yard. I call us disenfranchised, because Obama's selfie with some random lady or the whole selfie movement in general is more important than us and the conditions where we dwell.

Surprisingly, as tight as Miss Sheryl's unit may be, it's still more than enough space for us to receive affordable joy from a box of 50-cent cards and a rail bottle.

"A yo, Michelle was gonna beat on Barack for taking dat selfie with dat chick at the Mandela wake! Whateva da fuk a selfie is! What's a selfie, some type of bailout?" yelled Dontay from the kitchen, dumping Utz chips into a cracked flowery bowl. I was placing cubes into all of our cups and equally distributing the vodka like, "Some for you and some for you ..."

"What the fuck is a selfie?" said Miss Sheryl.

"When a stupid person with a smartphone flicks themselves and looks at it," I said to the room. She replied with a raised eyebrow, "Oh?"

It's amazing how the news seems so instant to most from my generation with our iPhones, Wi-Fi, tablets and iPads, but actually it isn't. The idea of information being class-based as well became evident to me when I watched my friends talk about a weeks-old story as if it happened yesterday.

Miss Sheryl doesn't have a computer and definitely wouldn't know what a selfie is. Her cell runs on minutes and doesn't have a camera. Like many of us, she's too poor to participate in pop culture. She's on public assistance living in public housing and scrambles for odd jobs to survive.

Sheryl lost her job as a cook moments after she lost her daughter to heroin, her son Meaty to crack and her kidneys to soul food. It took 15 to 20 unanswered applications a week for over a year for her to realize that no company wants to employ a woman on dialysis. Sometimes Bucket-Head and I chip in and buy groceries for her and her grandson Lil Kevin who has severe lead-paint poisoning, but was diagnosed late and is too old to receive a check.

Bucket-Head is a convicted felon but not really. He was charged with a crime that he didn't commit. I know this because my late cousin did the shooting and our whole neighborhood watched. Bucket was in the wrong place at the wrong time and as many know, we are products of a "No Snitching" culture.

As a result, the only work Bucket can find after 10 years of false imprisonment is that of laborer with the Mexicans who post up in front of 7-Eleven, or as a freelance dishwasher. Bucket's no angel, but he's also not a felon and doesn't deserve to be excluded from pop culture no more than Miss Sheryl or Dontay, who represents the definition of redemption to me.

I placed our cups at the table and the bottle in the center. "Me and Miss Sheryl are gonna whip ass tonight, hurry up, Dontay!" I yelled.

Dontay cleans nonstop. Roaches sleeping in the fridge, roaches relay racing out of the cabinets carrying cereal boxes, purchasing homes, building families, slipping through cracks for fun and weaving in and out of death -- Dontay bleaches them all. Dontay doesn't take handouts from us and won't go on government assistance. He couldn't contribute to the chips and vodka that week so he's cleaned for Miss Sheryl and would clean for Miss Sheryl even if there were no chips and vodka.

"Boy we ready to play the cards. Stop acting selfie and sit yo ass at the table!" yelled Miss Sheryl from another room. We all laugh. Miss Sheryl's rooms are separated by white sheets; they look like a soiled ghost at night when the wind blows. Her son Meaty stole and sold her doors years ago and housing never replaced them.

Dontay joined us at the table. "Takin forever, boy, wit dem big ass feet!" yelled a happy Bucket. Dontay was wearing my old shoes. They are 13's and busting at the seams but Dontay's a size 8 and his foot is digging through the side. His arms are chunked and wrapped in healed sores from years of drug abuse. He's eight years clean off of the hard stuff now, but I met him way back when I was 13, in his wild days.

He was huddled over his girlfriend in the alley behind my house. I watched moments before as she performed an abortion on herself with a twisted coat hanger. She screamed like the sirens we hear all day. I couldn't stop looking at her. He gazed too, in and out of a nod and then signaled me for help. I joined them. Together we dragged her to Johns Hopkins Hospital, which was under a mile away. Blood scabbed and dried on my hands, Nikes and hooping shorts; she lived until she OD'd months later. I've been cool with Dontay ever since.

"Tryin get dem roach eggs, tee-he, tee-he he he, gotta get the bleach on da roach eggs! Den dey won't come back!" Dontay replied as he sat at the table.

I dealt the first hand. Miss Sheryl reminded me to deal to the left. "Always deal to the left, boy, the rule don't change!" she said. She has the widest jaws in the history of wide and jaws, thicker than both of her bloated caramel arms, which are thigh-size. I collected the cards, reshuffled and dealt to the left. And there we were -- my job-hungry unemployed old heads and me the overworked college professor.

Not the kind of professor that makes hundreds of thousands of dollars for teaching one class a year but a broke-ass adjunct who makes hundreds of dollars for teaching thousands of classes a year. The other day I read an article about an adjunct who died in a homeless shelter and I wasn't surprised; panhandlers make triple, and trust me, I've done the research, I should be looking for a corner to set up shop.

I have a little more than my friends but still feel their pain. My equation for survival is teaching at three colleges, substituting, freelance Web designing, freelance graphic designing, rap video director, wedding photographer and tutor --  the proceeds from all of these are swallowed by my mortgage, cigarettes, rail vodka and Ramen noodles. I used to eat only free-range organic shit, I used to live in Whole Foods, I used to drink top shelf -- I used to be able to afford pop culture.

But long gone are the days when I pumped crack into the very neighborhood where we hold our card game. Eons since I had to stay up all night counting money until my fingers cramped. Since I had to lie on my back to kick my safe closed and I wore and treated Gucci like Hanes and drove Mercedes CL's and gave X5 beamers to my girlfriends -- my good ole days.

Eventually the mass death of my close friends caused me to leave the drug game in search of a better life. Ten-plus years and three college degrees later, I'm back where I started, just like my card-playing friends: too poor to participate in pop culture. Too poor to give a fuck about a selfie or what Kanye said or Beyoncé's new album and the 17 videos it came with.

"Put me on that Obamacare when you can, college boy!" Sheryl says to me as I contemplate the number of books I can make out of my shitty hand. We all laugh. I am the only one in the room with the skill set to figure it out, but we all really see Obamacare as another bill and from what I hear, the website is as broke as we are. We love Barack, Michelle, their lovely daughters and his dog Bo as much as any African-American family, but not like in 2008.

The Obama feeling in 2008 isn't the same as the Obama feeling in 2014. Obama had us dream chasing in 2008. My friends and I wanted him to be our dad and  best friend and mentor and favorite uncle. Shit, I wanted to take selfies with him. He was a biracial swirl of black and white Jesus sent to deliver us. To bless people stuck under the slums like Sheryl, Bucket, Dontay and I with jobs, access to the definition of words like selfie and hope -- REAL HOPE.

But in 2014 it feels the same as Bush, or Clinton, or any other president. The rich are copping new boats and we still are using the oven to heat up our houses in the winter, while eating our cereal with forks to preserve milk. America still feels like America, a place where you have to pay to play, any and everywhere even here at our broke-ass card game.

1 a.m. rolls around and we're faded, everyone but Miss Sheryl, that is, because dialysis prohibits her from drinking. My kidney pounds, her 2008 Obama for Pres T-shirt stares back at me all stretched out of shape, making Barack look like Sinbad. No one knows who won because really, we all lost. Dontay is asleep because I saw the roaches creeping back and Bucket staggered out.

I looked at Miss Sheryl, "We could take a late night selfie now but I swapped my iPhone for a boost mobile, $30 payment!"

She laughed and said, "Baby, what's a selfie again?"