As if it weren't already obvious... 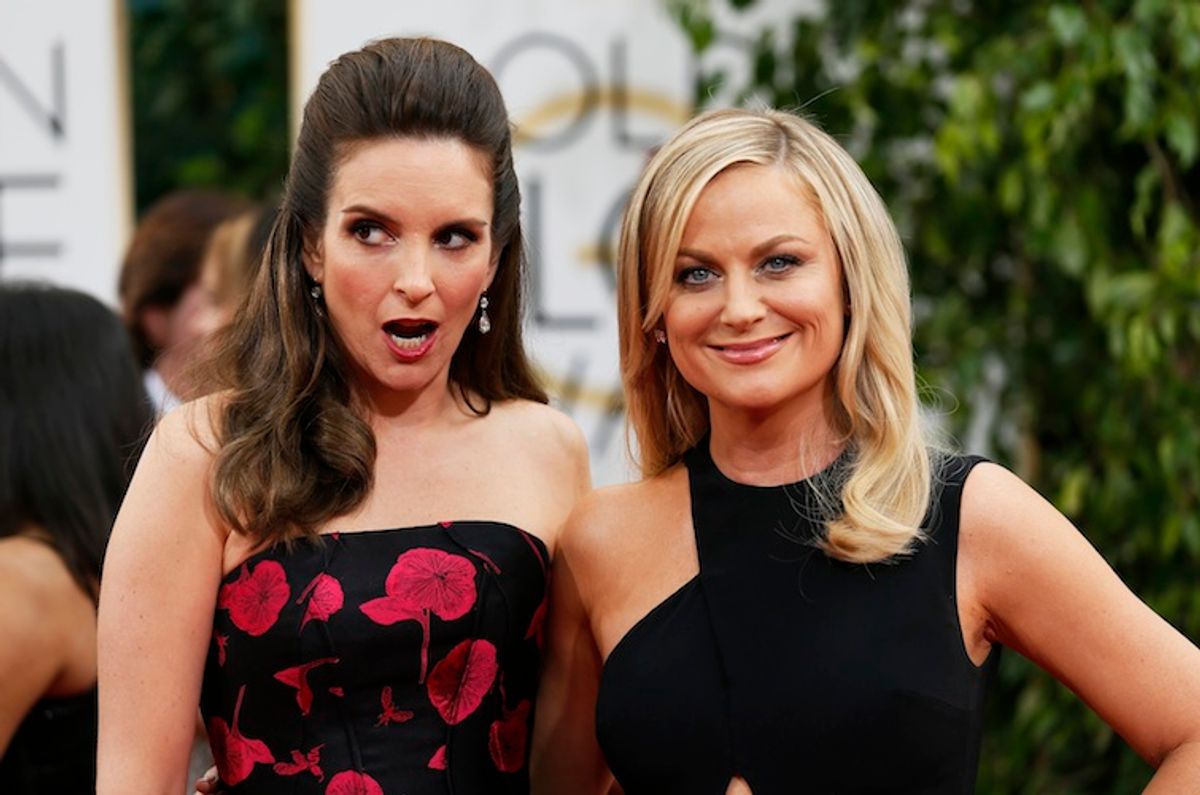 We're at the beginning of what's looking like a new age of female comedy. A brigade of female comics—women like Kristen Wiig, Melissa McCarthy, Sasheer Zamata, and the great Tina Fey—has stormed the cultural landscape. Adweek reports that of the 44 comedy pilots ordered by the networks in anticipation of the 2012-'13 season, 18 were conceived and/or written by women. At NBC and ABC, exactly half their combined sitcom orders were female-driven comedies. The hilarious women-centered comedy-drama "Orange Is the New Black," soon to begin its second season on Netflix, is a runaway hit. Comedien Amy Poehler debuted in her first romantic comedy, They Came Together at this year'sSundance, an event that buzzed with the success of funny women.

Yet the women-aren’t-funny camp clings to their beliefs like cave dwellers afraid of the sunlight. He-man comedian Adam Corolla complainedthat unfunny women get preferential treatment in Hollywood due to political correctness. Jerry Seinfeld recently grumbled that he didn't careabout diversity in comedy. Some men see humor as their special provenence, an echo of the primal cry-of-triumph over the enemy — something far too potent for ladies. They don't like encroachment.

The late Christopher Hitchens was the standard-bearer of the modern middle-class stereotype of female unfunniness, which he proclaimed in Vanity Fair. Noting a “humor gap” between sexes, Hitch observed that while women look for humor in the men they date, his man-friends did not share that expectation. Hitchens, a lower-middle-class boy shaped by his striving in an upper-middle-class world, absorbed a set of ideas about women and their respectability that allows ladies to express sexuality only as the passive object of his attraction; otherwise they had best shut up and fix him a drink. While conceding that female comedians exist, Hitch snarled that "most of them... are hefty or dykey or Jewish, or some combo of the three."

Certainly not nice pretty girls he'd want to sleep with! In Hitchworld, men express their manliness by laughing at life's slings and arrows, but "women, bless their tender hearts, would prefer that life be fair, and even sweet, rather than the sordid mess it actually is."

The problem for the Hitch crew is that the funny woman doesn’t sit well with the insecure man. She’s smart and savvy, and might not think your jokes are funny. Still more terrifying, she may find you an object of humor. (One of Hitch's male buddies once tried to seduce me by reading Proust aloud by the light of a candle which turned his balding pate into a giant glow-lamp, which, I confess, was pretty funny.)

Author and screenwriter Robin Epstein, a former standup comic, had this to say when I asked her about the funniness of women: “Of course women have senses of humor. How else can you explain our willingness to have sex with men?”

The funny female is not only too bold and brainy, she may be too sexually powerful for the ego-challenged male. Going all the way back to Greek courtesans, men have associated humor in women with sexual subversiveness and potentcy. Think of Mae West, whose remark, “Is that a gun in your pocket, or are you just happy to see me?” is the kind of repartee that can be either exciting or emasculating, depending on your confidence level. Bawdiness isn’t nice — it might be unclean, or downright scary. A smiling, laughing woman is taboo, disruptive. She might want to eat you, blast you with her crazy, or snap at your with her toothed vagina. (French feminist Hélène Cixous examined this paralyzing fear in The Laugh of the Medusa.)

It's true that some women try not to let their humor out of the bag as a survival technique. When we are funny, we can quickly become construed as a threat, so sometimes we figure it’s better to keep our heads down and pretend to be serious so we don’t become a target of outrage. This is a technique common to all oppressed groups, and it’s one reason that, I would argue, women and minorities are often much funnier than white men. They just keep it on the qt.

I inherited a naughty sense of humor from my father. From a young age, I realized that expressing it would confuse people who would either find me wicked or misinterpret me. Neither reaction was helpful in school, and it was detrimental to my high school dating life, particularly in the South. I began to affect a non-threatening persona in order to be asked out. Finding the sweet act too unnatural, I tried to add enough of my own humor to the expected persona to project saucy — acceptably funny in a cute way.

When I got to graduate school at NYU, I thought I could finally release the Kracken of my humor, and used to amuse myself in a class taught by the fatuous Irish literary critic Denis Donoghue by composing dirty limericks in the margin of my notebook. I remember this one:

I once had a charming old chum/

That he held a carafe

As he polished his staff

And added a dash to his rum

For some reason, I shared them with my parents, who thought I’d gone crazy (Dad liked his own ribaldry, but was aghast to see it mirrored in a chubby-cheeked female child.) I also slipped my parody of Robert Frost’s “Stopping By Woods on a Snowing Evening” under the door to Donoghue’s office.

Whose woods are these? I think I know

He runs a burlesque nudie show

He will not see me peeping here

I can’t get in for lack of dough…

I got a C in the class. From then on I sorta learned to put a lid on it, or at least stick my head down a barrel. (Maya Angelou talked about a folk tradition of slaves sticking their heads in a "laughing barrel" when something struck them as funny in order to avoid suspicion on the plantation.)

As I got older, I learned to bring my socially incorrect sense of humor out like a fine wine (or perhaps more like a cheap Irish whiskey), to savor it with men (and women) secure enough not to be threatened — people who would hopefully share their own subversive riches with me. This became automatic, and I find that funny stuff doesn’t even really pop into my head when I’m around people who don’t seem like they’d dig my humor vibe. It’s kind of like turning off the part of your brain that speaks Spanish in order to have a chat in English. Who has time to translate?

Some women strike a pose of straight-backed seriousness in an attempt to display power. You see this during Twitter firestorms between feminists, where the intensity of righteousness can rise to Chernobyl levels. Seriousness is their shield against the dominant forms of male-centric humor that have made them the objects of crude jokes and misogyny. The statement “Rape isn’t funny,” a popular mantra of online feminists, sounds like a statement by Captain Obvious until you realize that young men actually do, on ocassion, post videos of their classmates being sexually assaulted so they can laugh about it— humor as a kind of dominance display.

But some feminists also seem to distrust humor because it chips away at the foundation of ideological purity, and that's too bad. Feminist firebrands like former Texas governor Ann Richardson have deployed humor deftly and effectively to further their agendas. Comedian-actress Samantha Bee of "The Daily Show with Jon Stewart" gets her feisty politics across one witty joke at at time.

Traditionally, women whose status does not oblige them to follow middle-class rules are allowed to exhibit more wit and humor in pop cultural productions than their bourgeois counterparts. Think of Dame Maggie Smith’s Dowager Countess on “Downton Abbey” on the upper-class end of the spectrum, with the foul-mouthed, working-class Roseanne and the inmates of a women’s prison in “Orange Is the New Black” at the lower end of the socioeconomic spectrum. But even middle-class female characters are starting to slip out of their humor-free straightjackets, as the filmBridesmaids demonstrated, in which urban women drank down frat humor and spat it back out to memorable effect.

Ultimately, female humor is about both resistance to cultural bullshit and a communion with those who desire this resistance. Right now, these forces are strong. Today's funny women sure aren't worried about protecting anyone's fragile ego. No wonder Hitch was nervous.