How much is "too much" to win a reality show? 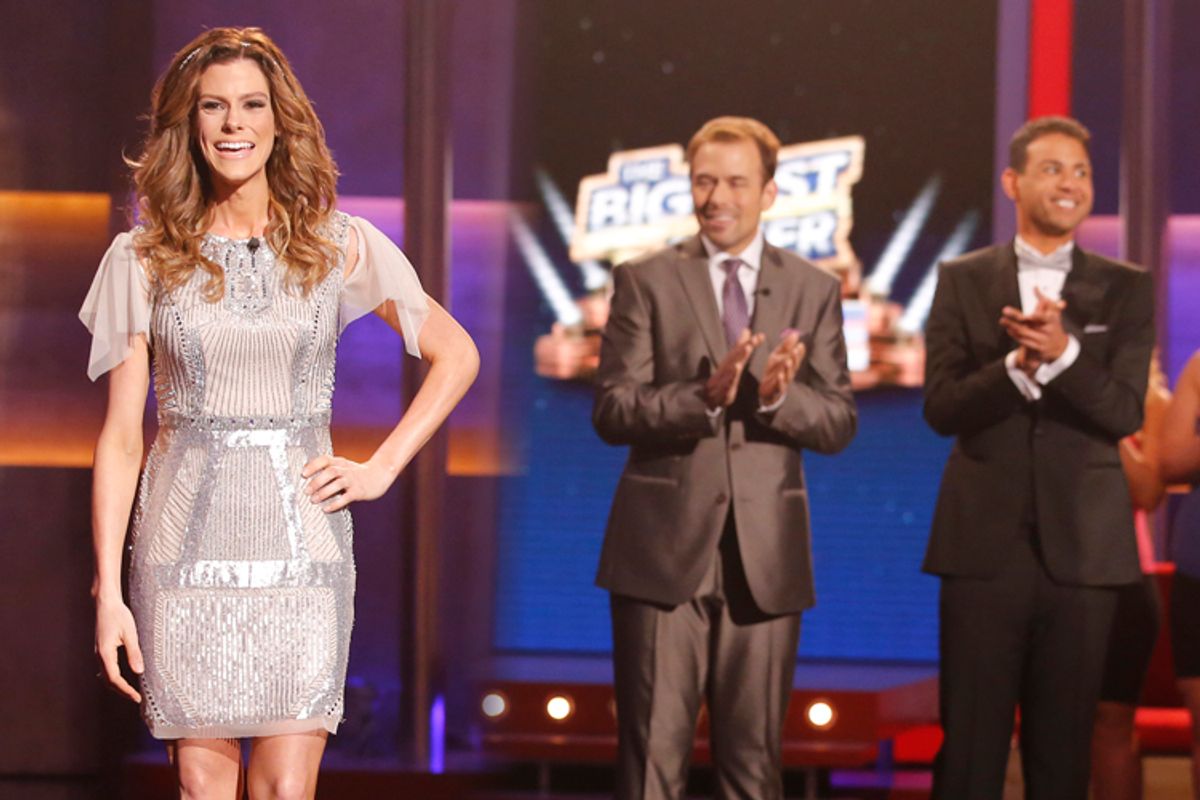 How do you win at "The Biggest Loser"? By losing the most weight, of course. Unless you lose too much, in which case you're also a loser.

Such is the fate of Rachel Frederickson, who triumphed on Tuesday night's finale of NBC's 10-year-old competitive weight loss show. The 24-year-old Frederickson walked away with the $250,000 grand prize after shedding – as the numbers appeared in stark black and white on televisions across the land -- a dramatic 155 pounds from her starting weight of 260 pounds, nearly 60 percent of her original weight. It's the highest percentage of weight lost by any contest in the show's history. And even the show's trainers Bob Harper and Jillian Michaels couldn't contain their shock when she emerged, transformed and slender.

And from the moment Frederickson appeared in her slinky, silver dress and her brand-new, 105-pound body, the controversy and concern trolling began. "'Biggest Loser': Uproar as winner appears 'too thin' at 105 pounds" blared the LA Times. Zap2It asked, "Why was Rachel Frederickson allowed to lose too much weight?" Time decided, "The Biggest Loser Goes Too Far" and said, "It’s easy to see that Frederickson looks unhealthy." ET meanwhile noted the "'Biggest Loser' Scandal!" and asked, "Is the Winner Too Thin?" – right underneath a link for a pictorial on "Hollywood's Hottest Bikini Bods!" And of course, Twitter erupted into fretting over the "sickly," "eating disorder" new version of the former competitive swimmer.

But in a conference call with reporters this week, in which she used the word "journey" nine times, Frederickson described herself as now in maintenance mode and said, "I've officially found that proud, confident girl that I lost. I was an athletic national-level swimmer, and to have that athlete come back again, it's just truly an amazing feeling." But I'm sure if we work together, America, we can undermine that quickly enough.

There is no denying that dangling a quarter of a million dollars in front of overweight people as an incentive to get as thin as possible as quickly as possible is not the most practical or sensible plan ever invented for long-term health. Nor is it the kind of thing most people can apply to their own experience. The average person is not going to drop over a hundred pounds in six months -- nor, for the average person, is that a good idea. But hey, a show about quietly making small changes over a lengthy period of time wouldn't exactly burn up the ratings. What "The Biggest Loser" has instead traditionally offered has been a TV-size jolt of thinspiration, and in its better moments, a message that yes, changing your body takes hard work and discipline. Unless, we have learned this week, you take it "too far."

As with many other extreme reality shows, there are serious ethical questions to be asked regarding whether the rigors of the competition are putting the players in physical danger and whether the narrative is sending an unrealistic message to viewers. But when you're talking about an individual, whether she's 260 pounds or 105 pounds, it is as a general rule of thumb and even downright toxic to look at her body and tell her she's inhabiting it incorrectly. Our public discourse devotes far, far too much time and energy to scrutinizing other people's bodies – especially women's -- and declaring they are somehow wrong. There is too much fetishizing BMIs and numbers on a scale, neither of which, in case you're wondering, can accurately tell a total stranger whether another human being is "healthy." The "journey" of Rachel Frederickson reveals, from start to finish, our dysfunctional, effed-up American relationship with food and weight. Being big is seen as a sad, sorry obstacle to be triumphed over; being thin entitles people to make snap judgments about whether you have an eating disorder. And there's no real winner at all.