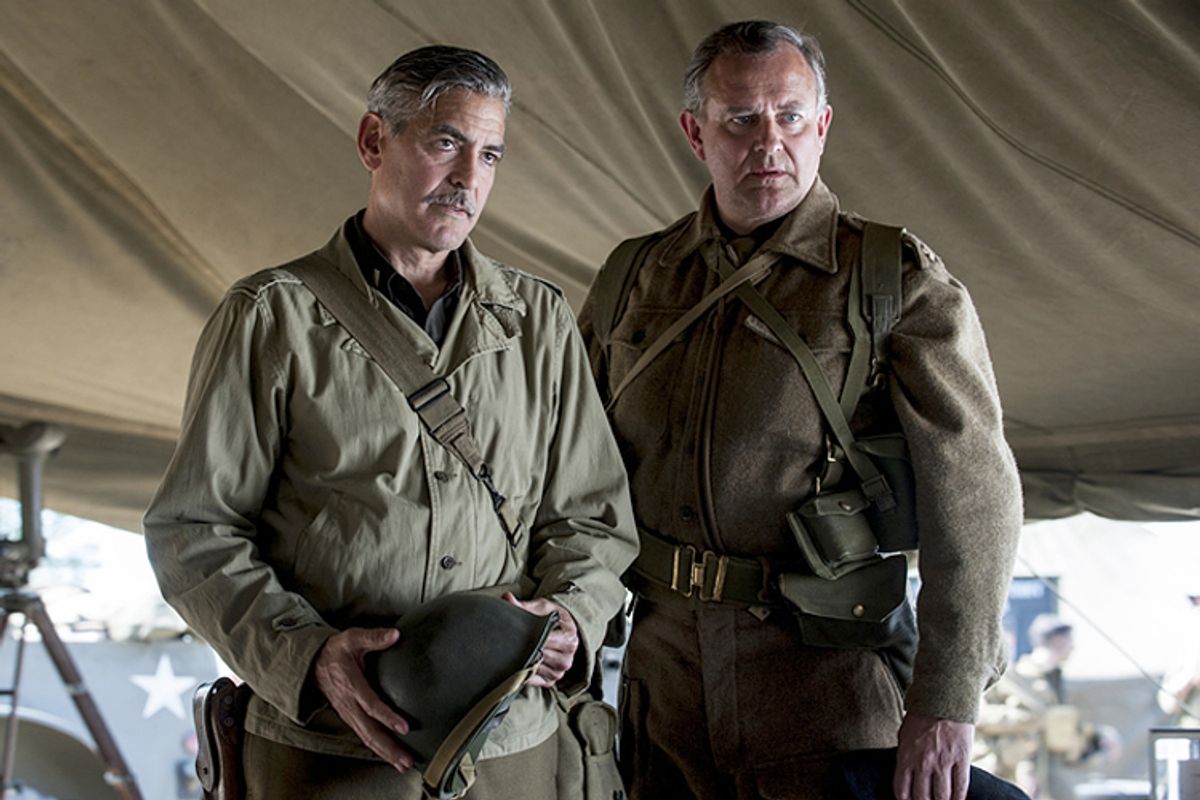 Was it worth risking people’s lives to save the great works of European art from the Nazis? And if so, why? It’s a tricky question, and one whose answer is not necessarily obvious. Indeed, I’m not entirely sure I know the answer: Most of us would feel that rescuing a Michelangelo was somehow important in the abstract, but very few of us would sacrifice our lives or our families to do it. George Clooney, alleged Renaissance man and undoubted paragon of decency and masculinity, is clearly troubled by this question in his dull but genial World War II adventure film “The Monuments Men,” since it comes up over and over again. But he never figures out the right way to ask it, let alone answer it.

“The Monuments Men” can offer only dutiful clichés about cultural patrimony, most often delivered by the mustachioed Clooney himself, in his boring-est mode as art historian turned soldier Frank Stokes. Whereas the real story of the United States Army’s art experts, and their last-ditch scramble across Europe to find looted masterpieces before the Germans burned them or the Russians stole them, is fascinating. It raises all kinds of thorny issues about how we determine cultural value, whether works of art are more than commodities and the nature of the changed relationship between Europe and America after 1945.

Clooney and co-writer Grant Heslov’s script only glances off the question of what kinds of art the Nazis wanted and why — they burned Picasso and Paul Klee, but wanted the Old Masters for Hitler’s ginormous, never-built “Führer Museum” in Linz — and indeed “The Monuments Men” exhibits a bizarre lack of feeling for art of any kind. It’s almost as if Clooney were so terrified of being “arty” that he refused even the obvious middlebrow aesthetics of the situation. If you’re going to make a big deal about the Ghent Altarpiece or the Madonna of Bruges, you might want to make us feel something about them, or at least let us look at them for more than a split-second at a time, instead of just pronouncing on their importance.

But that’s exactly the problem with this movie, or at least one of the big ones: The altarpiece painted by Jan van Eyck and the Madonna carved by Michelangelo, along with the thousands upon thousands of other works hoarded by Nazi leaders in salt mines and Bavarian castles, are MacGuffins, meaningless plot coupons about as relevant to the movie Clooney has tried to make as the eponymous object is to John Huston’s “The Maltese Falcon.” And while Huston’s film is great on its own terms, an enduring classic of 1940s hard-boiled crime cinema, Clooney’s movie is a slow-witted, occasionally agreeable retread of numerous WWII band-of-brothers flicks its director no doubt watched on TV as a 1970s teenager. There’s a faint patina of culture and sophistication slathered over the whole thing, meant to signify seriousness (like the beard Clooney’s character wears at the beginning and end of the movie) without actually achieving it.

If you want to understand the real history of the Nazis’ rapacious desire to devour and reshape all of Europe’s cultural history, turning it into propaganda for their imaginary Thousand-Year Reich — which was largely driven by the personal ambitions and tastes of failed Vienna art student and landscape painter Adolf Hitler — you’re better off with the excellent 2006 documentary “The Rape of Europa.” If you want a World War II movie, this one probably doesn’t rank in the top 200. On the other hand, if you want a low-wattage “Ocean’s Eleven” knockoff, with an A-list cast of middle-aged dudes — Clooney, Matt Damon, Bill Murray and John Goodman, with Jean Dujardin thrown in for some notional continental sex appeal — transported a few decades back in time and bumbling around Europe in Jeeps, I guess you’ve come to the right place.

“The Monuments Men” is an especially frustrating experience because you can see traces, here and there, of the more serious and resonant film about second chances and middle-aged melancholy that Clooney may once have believed he was making. There’s a lovely scene with Bill Murray standing in the shower, at a frozen encampment near the Battle of the Bulge in the winter of 1944, listening to a phonograph record of his daughter and grandkids singing “Have Yourself a Merry Little Christmas” from back in Whereverville. (It has nothing to do with the plot, and may only be in the movie because the original release date was in December.) There’s also an unforgettable moment when all the surviving monuments men take a slow and silent elevator ride together, out of a German salt mine where they’ve discovered a trove of stolen art. They also found a barrel of gold in that mine — a barrel of gold teeth — and you can feel them trying to reckon with that horrible new understanding.

But a strikingly large percentage of this movie is neither interesting as history nor entertaining as drama. You get the feeling that Clooney is sticking too closely to the facts to have any fun, but is fundamentally uninterested in the story the facts have to tell. Stokes becomes personally invested in recovering the Bruges Madonna and the Ghent Altarpiece before the Red Army does, but his reasons seem irrelevant and sentimental. Matt Damon’s character, a Metropolitan Museum curator named Granger, spends the latter portion of the war in Paris, speaking bad French (a running, unfunny gag) and trying to pry information out of a bespectacled Cate Blanchett while being too much of an upright American to sleep with her. I can’t tell you the first thing about the characters Goodman and Murray are playing; they’re the “John Goodman guy” and the “Bill Murray guy.” Dujardin plays the French guy. Hugh Bonneville of “Downton Abbey” is in the group for a minute, as the drunken Englishman, and then there’s Bob Balaban, who as always is in his element building a funny character out of nothing in particular.

We’ve officially reached the point of diminishing returns in the career of George Clooney, movie director, which began in such a weird and unexpected way with “Confessions of a Dangerous Mind,” with Sam Rockwell as deranged talk-show host and alleged CIA agent Chuck Barris. Nothing he’s made since has been half that audacious, or quite that good: “Good Night, and Good Luck” was earnest, artful and even inspiring, with a terrific cast headed by David Strathairn, and “The Ides of March” was about two-thirds of a great political thriller, with lots of nice actorly moments (from Paul Giamatti, from Philip Seymour Hoffman, from Clooney himself) that didn’t entirely cohere. I’m going to pretend his 1920s football rom-com, “Leatherheads,” did not happen.

Here we see Clooney deliberately steering away from political or “liberal” subject matter and trying to make an old-fashioned studio movie that’s nostalgic, patriotic and fun. The result is a near-total face-plant. I guess “The Monuments Men” is not quite dire enough to make anybody’s list of all-time flops, but it’s close. It surely won’t be profitable, and even the best-loved man in Hollywood cannot have enjoyed seeing his project yanked out of the fall Oscar season and dumped in the frozen wasteland of February. I still think the guy can probably make movies (though I’m a whole lot less sure about that than I used to be), but only if he stops trying to be a canny, strategic people-pleaser and figures out whether he has something to say.