Orcas: Amazing athletes, but they don't belong at the Olympics 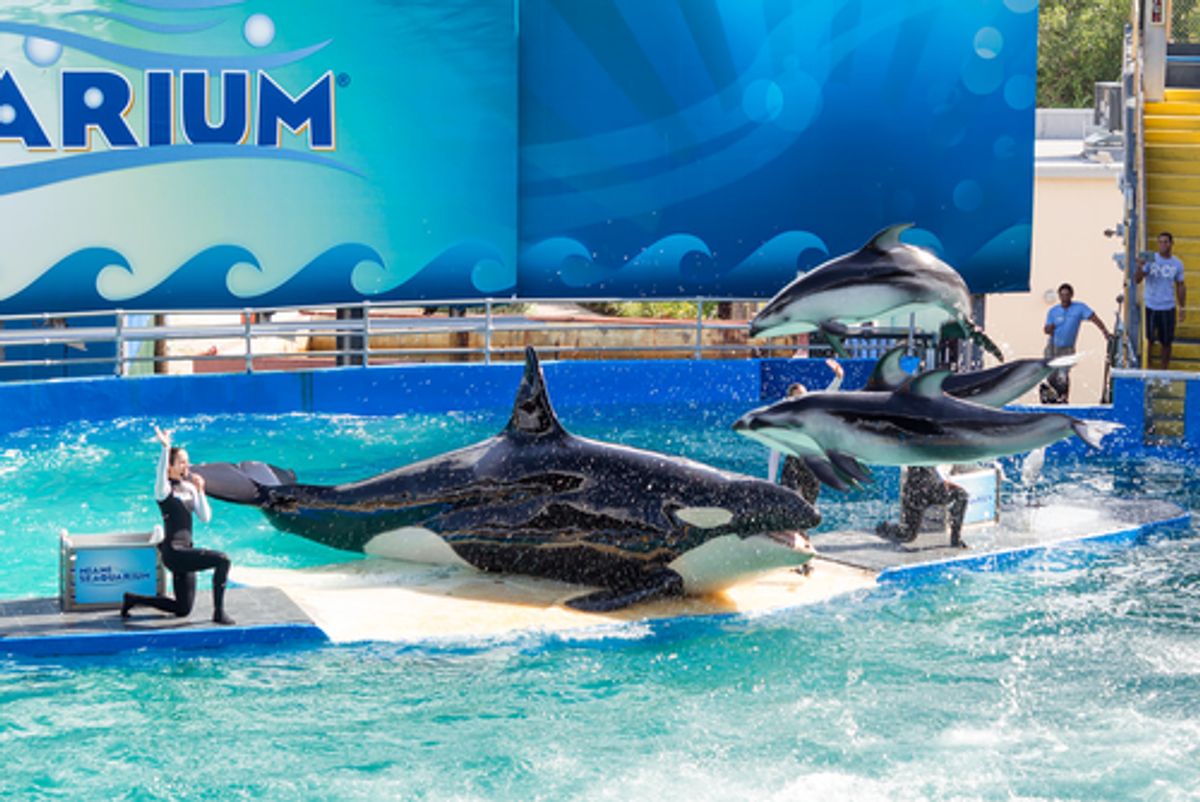 In my 25 years studying wild orcas in Alaska’s Prince William Sound, I have seen them leap 10 feet out of the water to chase down a Dall’s porpoise. I’ve watched them dive to depths of 700 feet hunting for king salmon. I’ve observed them holding their breath for more than 10 minutes at a time. And I’ve seen families leave sheltered waters during massive storms to surf down 15-foot swells.

Unlike most humans, physicality is not extracurricular to an orca’s life. It is the curriculum. To be an orca is to be a body moving constantly through boundless space, from birth until death. It is to travel the distance of an ultra-marathon every day. These incredible, social marine mammals are also some of nature’s most amazing athletes.

So it’s all the more distressing to hear reports that two wild-caught orcas might be put on display in an aquarium in Sochi during the Olympic games, which open this week on Russia’s Black Sea coast. After learning the news last week, I joined 400,000 others in signing an online petition in protest. Then I started digging for more facts. They are hard to come by.

News reports have stated that a Russian company called White Sphere captured eight orcas last year in the Sea of Okhotsk, which lies between Russia and Japan. But details about the round-up, transport, and current location of these animals remains cloaked in secrecy. According to the Vancouver Sun, White Sphere initially admitted in a written statement to legally capturing a single orca for the purpose of exhibiting the mammal in Sochi. But amidst growing public outcry, the company has denied it.

So I contacted my colleague Erich Hoyt, a longtime orca researcher and co-director of the Russia Far East Orca Project. Hoyt’s book Orca: The Whale Called Killerchanged the course of my life when I read it in my early twenties. Working at a fish hatchery in Prince William Sound, I became entranced by small groups of orcas that occasionally appeared in the bay. The book told me that those animals possess one of the most complex social systems on Earth, with populations developing their own culture and languages. Hoyt also wrote about the lives of field biologists who were wedded to long-term scientific research as well as conservation. I imagined—then wormed, then worked—my own way into that life, committing myself to one place, to one species, for the long haul.

For the last decade, Hoyt and a team of Russian and Japanese scientists have been documenting orca populations off Russia’s Kamchatka Peninsula. In an interviewwith Tim Zimmerman, co-producer of the documentary Blackfish, Hoyt describes numerous, and often botched, attempts by Russian hunters to capture orcas off Kamchatka and the Commander Islands over the last 15 years. (Although the Marine Mammal Protection Act, passed in 1972, prohibits catching wild orcas in American waters, as well as importing them, international laws are not so strict.) The eight reported captures by White Sphere, Zimmerman writes, may presage “a new orca gold rush” for the growing industry of marine parks in Asia.

Hoyt told me in an email that multiple sources have suggested that two of those orcas were sent to China, and two to Moscow, though their precise whereabouts and health conditions are unknown. The status of the other four orcas is an even deeper mystery. Two tweets written in November by Elena Krylova, a spokewoman for the Sochi airport, indicated that two orcas were headed for the Olympic host city. Although Krylova has since erased the messages from her account, a retweet can be seen below. A translation reads, “On Thursday, we transport the two killer whales in bathtubs weighing 33.5 tons in Sochi dolphin J All the Olympics!”

There remains quite a bit of uncertainty regarding whether any of the eight orcas will, in fact, appear in a dolphinarium (there are three in Sochi) during the winter games (UPDATE: it now appears that they will not), but one thing is clear: they were removed from a habitat hundreds of square miles in size, a stretch of sea that they know intimately, and where they would have spent the rest of their lives. Instead, they were placed in tanks and separated from podmates with whom they would otherwise have traveled for life. If you have seen the film Blackfish, you know that when this happens, orcas scream.

While studying the impacts of the 1989 Exxon Valdez oil spill in Prince William Sound, I tracked a group of orcas for 24 hours as they traveled 60-plus miles around the massive Knight Island. Early that day, an orca named Eyak surged across 10 miles of choppy water at 15 knots to join his family. When he finally caught up with them, the reunited group socialized and vocalized with astonishing vigor for hours. But the pod never stopped moving, even in the darkest hours, when I could only follow them by the sound of their blows. When orcas rest together, their bodies touch, and they always, always keep on moving.

Cetaceans deserve the arena of an open ocean, not a small pool thousands of miles from home. An orca’s athleticism starts on day one; as a newborn, its mother and aunts push it to the surface to take its first breath. They urge the calf to swim. And swim. And swim. The first day of an orca’s life is the beginning of a 50- or maybe even a 100-year-long swim.

To keep these animals in an isolated cage is to deny their athleticism, not celebrate it—whether it’s in Sochi or somewhere else. Public outrage might stop the exhibition of these particular animals in this particular place, but the tragedy of their capture cannot be undone. And the brutality of all the belugas, dolphins, and orcas endlessly circling tanks around the world does not change. Even if we don’t see orcas on our TV screens during Olympic coverage, we still must live with the knowledge of those captives, and their suffering, and the failure of human empathy, imagination, and knowledge that put them there.