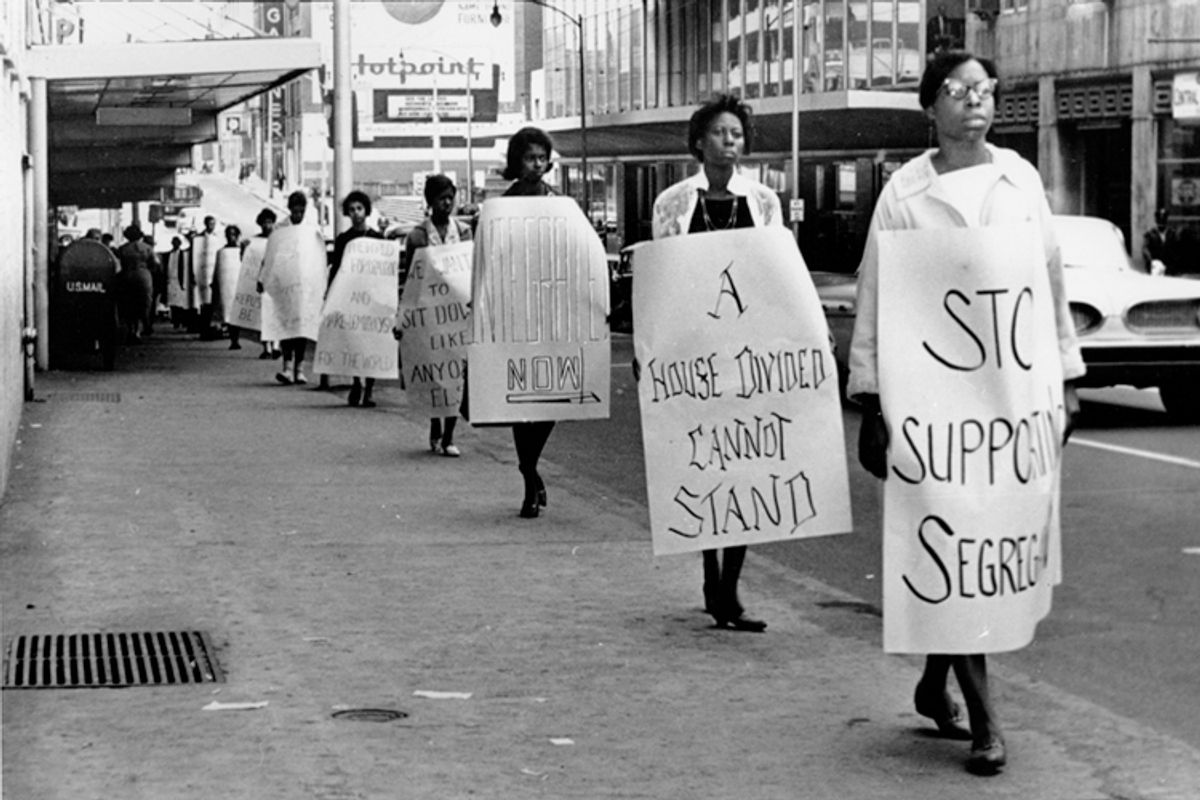 Picketers outside Rich's department store protesting against segregated eating facilities at one of its lunch counters in Atlanta, Ga., on Oct. 19, 1960. (AP)
--

Invariably, around February of each year, coinciding with Black History Month, you'll hear people asking, “Why isn't there a white history month?”

Do these people mean we should condense all the American history centering around white people to just one month and devote the other 11 to people of color? Of course not.

It's readily accepted that white history is taught, year-round, to the exclusion of minority histories. But the literal history of whiteness — how and when and why what it means to be white was formulated -- is always neglected. The construction of the white identity is a brilliant piece of social engineering. Its origins and heritage should be examined in order to add a critical layer of complexity to a national conversation sorely lacking in nuance.

I'm guessing that's not what they mean, either.

In conversations about race, I've frequently tried and failed to express the idea that whiteness is a social construct. So, here, in plain fact, is what I mean:

The very notion of whiteness is relatively recent in our human history, linked to the rise of European colonialism and the Atlantic slave trade in the 17th century as a way to distinguish the master from the slave. From its inception, "white" was not simply a separate race, but the superior race. “White people,” in opposition to non-whites or “colored” people, have constituted a meaningful social category for only a few hundred years, and the conception of who is included in that category has changed repeatedly. If you went back to even just the beginning of the last century, you'd witness a completely different racial configuration of whites and non-whites. The original white Americans — those from England, certain areas of Western Europe, and the Nordic States — excluded other European immigrants from that category to deny them jobs, social standing, and legal privileges. It's not widely known in the U.S. that several ethnic groups, such as Germans, Italians, Russians and the Irish, were excluded from whiteness and considered non-white as recently as the early 20th century.

Members of these groups sometimes sued the state in order to be legally recognized as white, so they could access a variety of rights available only to whites -- specifically American citizenship, which was then limited, by the U.S. Naturalization Law of 1790, to "free white persons" of “good character.” Attorney John Tehranian writes in the Yale Law Journal that petitioners could present a case based not on skin color, but on “religious practices, culture, education, intermarriage and [their] community's role,” to try to secure their admission to this elite social group and its accompanying advantages.

More than color, it was class that defined race. For whiteness to maintain its superiority, membership had to be strictly controlled. The “gift” of whiteness was bestowed on those who could afford it, or when it was politically expedient. In his book “How the Irish Became White,” Noel Ignatiev argues that Irish immigrants were incorporated into whiteness in order to suppress the economic competitiveness of free black workers and undermine efforts to unite low-wage black and Irish Americans into an economic bloc bent on unionizing labor. The aspiration to whiteness was exploited to politically and socially divide groups that had more similarities than differences. It was an apple dangled in front of working-class immigrant groups, often as a reward for subjugating other groups.

A lack of awareness of these facts has lent credence to the erroneous belief that whiteness is inherent and has always existed, either as an actual biological difference or as a cohesive social grouping. Some still claim it is natural for whites to gravitate to their own and that humans are tribal and predisposed to congregate with their kind. It's easy, simple and natural: White people have always been white people. Thinking about racial identity is for those other people.

Those who identify as white should start thinking about their inheritance of this identity and understand its implications. When what counts as your “own kind” changes so frequently and is so susceptible to contemporaneous political schemes, it becomes impossible to argue an innate explanation for white exclusion. Whiteness was never about skin color or a natural inclination to stand with one's own; it was designed to racialize power and conveniently dehumanize outsiders and the enslaved. It has always been a calculated game with very real economic motivations and benefits.

This revelation should not function as an excuse for those in groups recently accepted as white to claim to understand racism, to absolve themselves of white privilege or to deny that their forefathers, while not considered white, were still, in the hierarchy created by whites, responsible in turn for oppressing those “lower” on the racial scale. During the Civil War, Irish immigrants were responsible for some of the most violent attacks against freedmen in the North, such as the wave of lynchings during the 1863 Draft Riots, in which “the majority of participants were Irish,” according to Eric Foner's book “Reconstruction: America's Unfinished Revolution, 1863-1877” and various other sources.  According to historian Dominic Pacyga, Polish Americans groups in Chicago and Detroit “worked to prevent the integration of blacks into their communities by implementing rigid housing segregation” out of a fear that black people would “leap over them into a higher social status position.”

Behind every racial conversation is a complex history that extends to present-day interactions and policies, and we get nowhere fast if large swaths of our population have a limited frame of reference. An understanding of whiteness might have prevented the utter incapability of some Americans to realize that “Hispanic” is not a race — that white Hispanics do exist, George Zimmerman among them. This knowledge might have lessened the cries that Trayvon Martin's murder could not have been racially motivated and might have led to, if not a just verdict, a less painfully ignorant response from many white Americans.

This comprehension of whiteness could also dissuade many white people of such detrimental and pervasive racial notions, such as, “Why is black pride OK but white pride is racist?” If students are taught that whiteness is based on a history of exclusion, they might easily see that there is nothing in the designation as “white” to be proud of. Being proud of being white doesn't mean finding your pale skin pretty or your Swedish history fascinating. It means being proud of the violent disenfranchisement of those barred from this category. Being proud of being black means being proud of surviving this ostracism. Be proud to be Scottish, Norwegian or French, but not white.

Above all, such an education might help answer the question of whose problem modern racism really is. The current divide is a white construction, and it is up to white people to do the necessary work to dismantle the system borne from the slave trade, instead of ignoring it or telling people of color to “get over” its extant legacy. Critics of white studies have claimed that this kind of inquiry leads only to self-hatred and guilt. Leaving aside that avoiding self-reflection out of fear of bad feelings is the direct enemy of personal and intellectual growth, I agree that such an outcome should be resisted, because guilt is an unproductive emotion, and merely feeling guilty is satisfying enough for some. My hope in writing this is that white Americans will discover how it is they came to be set apart from non-whites and decide what they plan to do about it.

So, yes, for one month, let's hear about white history, educating ourselves and others. Let's expose whiteness as a fraudulent schema imposed as a means to justify economic and physical bondage. Let's try to uncover the centuries-old machinations that inform current race relations and bind us in a stalemate of misunderstanding. Then let's smash this whole thing to pieces.

Mary-Alice Daniel is a Zell Fellow at the University of Michigan's MFA Program, where she writes poetry and travel essays. She was born in Nigeria and raised all over the world.