The 10 most memorable moments of the Sochi Olympics opening ceremony 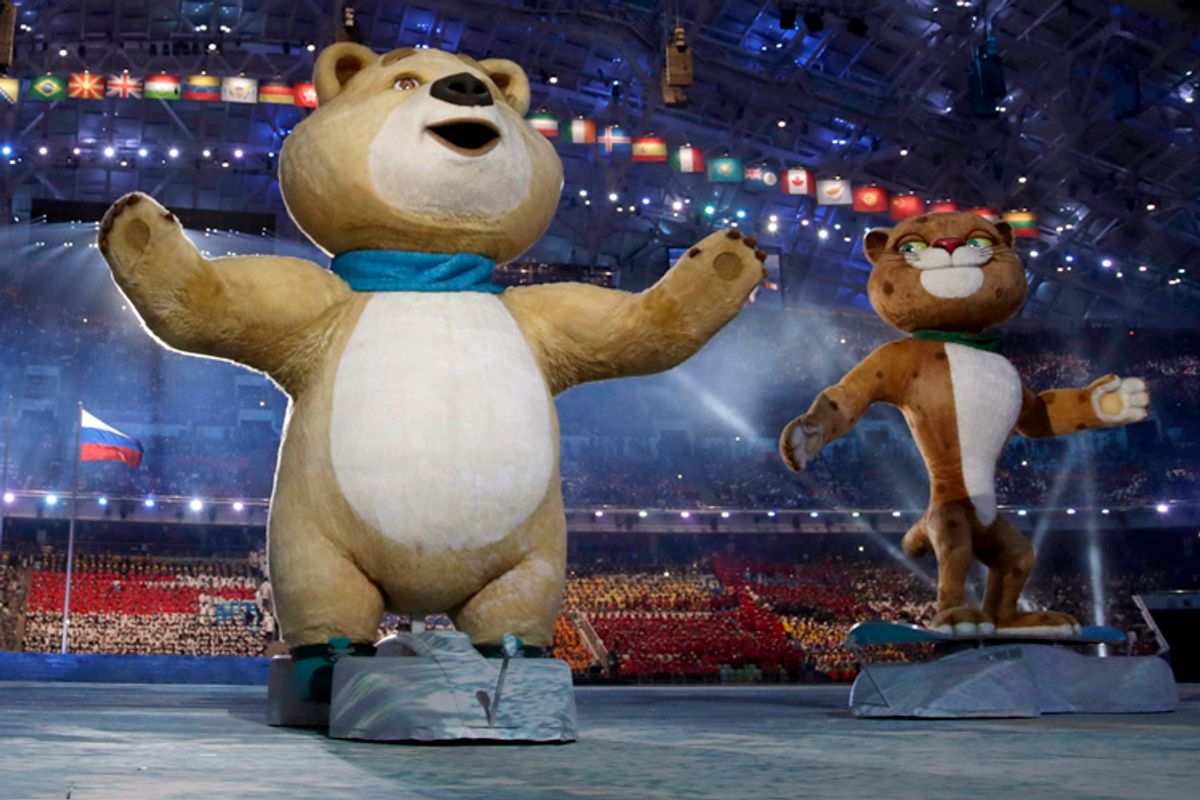 The 2014 Winter Olympics have officially begun, kicking off the biggest and most expensive Winter Games ever in Sochi, Russia. Outside of the Fisht Olympic Stadium, which hosts 40,000 spectators, dogs are dying and journalists aren't sleeping, but all of that was temporarily forgotten during the ceremony. Here are 10 of the most memorable moments:

The Opening Ceremony kicked off with a concert that played, of course, classical music by Tchaikovsky, but took a bizarre turn when Russian duo t.A.T.u took the stage. As many will recall, the ladies of t.A.T.u, Lena Katina and Yulia Volkova, first gained international fame in 2003 for kissing each other in their video, “All the Things She Said.” Though Katina and Volkova’s kissing is just a part of their act, their selection stands out given Russian President Vladimir Putin’s strict anti-gay legislation and the anti-gay hate crimes that have been sweeping the country.

The elaborate set of floating islands

The concert gave way to an impressive set of nine floating islands, each representing a different region in Russia, suspended from about 4 km of rails throughout the stadium. The sets included the forests of the Ural Mountains, a mechanized wolf from Chukotka and the volcanoes of the Kamchatka Peninsula.

Amid the floating islands was a floating 11-year girl ... because, why not? Then ... a serious technical malfunction!

One of the most important moments of the first half of the Opening Ceremony has been forever tainted by a malfunction. Oops. The Parade of Nations

Though it's technically not a single moment, the entire Parade of Nations was memorable -- Olympians entered the stadium atop projections of the world map on the stadium floor. They were accompanied by the musical stylings of DJ Rudenko, who mixed classical music with techno. The parade also included some interesting costumes ...

Russia looked like elves from the North Pole ... or Santas:

And the U.S. looked like attendees to an ugly holiday sweater party:

There were also snow queens

Every country was ushered into the stadium by a snow queen, identifiable by her white garb and massive crown: Are this year’s Olympic mascots -- the polar bear, the snow leopard and the arctic hare -- any better than London's bizarre one-eyed cartoons? No, they are not. In fact, they are worse. Much, much worse: The troika and a blizzard

After the Parade of Nations, a flurry of fake snow swirled in. A magnificent troika hovered over the stadium, pulling the sun behind it. The entire structure spanned 65 meters long and launched a segment devoted to Russian history. The BBC announcers described the opening ceremony's portrayal of Communism -- a dark, oppressive red backdrop with the Hammer & Sickle above young, vibrant Russians -- as "tongue-in-cheek." They added that many Russians look back at Russia's Communism with nostalgia, as “a pleasant time in Soviet history." Regardless, this was arguably the most controversial moment in the show. The night ended with a spectacular finale, both within Fisht Stadium and around it.