How do we watch Woody's movies now? 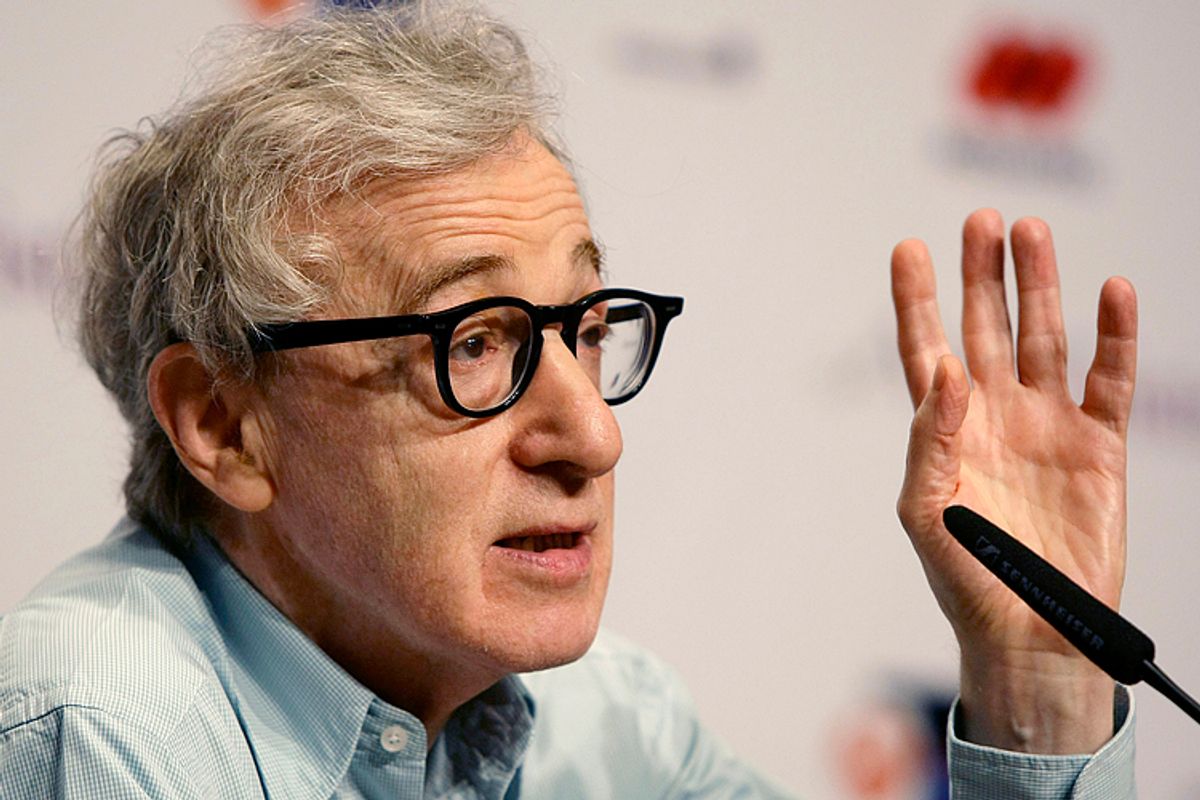 Interpreting an artist’s work in light of what we know or believe about his personal behavior and beliefs — or, to turn it around, interpreting the personality through the work — is a dangerous game. None of us can resist looking for such correspondences, though, and I’m not entirely sure we should. Sometimes we talk sanctimoniously about separating the man from the art (I’ll be using the male pronoun, for reasons we all understand) but in point of fact the boundaries between them are never entirely clear and the relationship is always unstable. I’m not wielding the cudgel of post-structuralist theory here; the ambiguity I’m talking about is more like common sense or ordinary understanding.

If you observe that Woody Allen has often played an awkward, nerdy guy who lusts after younger women in his movies, and then suggest that somehow buttresses the case that he is or was a child-abusing pedophile in real life, I suspect most people (although not all) would reject that as an overly crude formulation. But if we talk instead about the generalized atmosphere of sexual dysfunction in Allen’s cinematic universe, its persistent themes of male unhappiness and romantic yearning, and its sardonic-antagonistic portrayals of adult women (especially if they happen to be married to the protagonist), and relate those things only to known facts, the picture looks quite different.

Unfortunately for Allen’s public image, that analysis dovetails all too well with the biography of a man who had a sexual affair with his girlfriend’s teenage daughter, blowing up their blended family and wreaking immense emotional damage that continues to reverberate 20-odd years later. Those are the actions of an insatiable egotist, an emotionally stunted, overly intellectual man-child who cannot quite see other people as real and defaults to pathetic teenage yearbook nostrums: “The heart wants what it wants.” (Did he draw that inside a heart, with a purple gel pen?) All of which is very close to the character Allen has repeatedly played on-screen, sometimes lovingly and sometimes scathingly.

In his comic performances and in his life, Allen has often played the role of a taboo-breaker, pursuing the teenage Mariel Hemingway in “Manhattan” and skirting the incest shibboleth in his real-world relationship with Soon-Yi Previn, who is now his wife. Allen’s detractors often refer to Soon-Yi as his adopted daughter or stepdaughter, and then his defenders rush to correct them, since Allen was never married to Mia Farrow and never adopted Soon-Yi. As with so many other things about this case, it strikes me that there’s no right answer: No, Woody and Soon-Yi were not technically related, but it was pretty damn close to that; the confusion reflects the widespread sense that a taboo was violated, even if it was just the taboo against being a lecherous creepazoid with appalling judgment. And while there’s no clear connection between being an adult man who digs teenage girls and one who preys on little kids — indeed, they are generally regarded as distinct pathologies — the vibe we get off Allen, in his art and his life, is that of a damaged personality with boundary issues.

Art is often — very often, I would say — a form of confession, revelation and self-indictment. But it's also one that is never simple or straightforward: It’s an indictment written in a language we can’t read, for fantastical crimes that may not exist in the tangible world. Do the uncomfortable correspondences between Allen’s movies and his private life tell us anything about Dylan Farrow’s allegation that he molested her when she was 7 years old? They do not. Whether or not the abuse occurred is a question of fact to which we will never have an answer, not a subject for artistic interpretation or intellectual posturing. But let’s not pretend that the uneasy sexual universe of Allen’s films plays no role in this overheated cultural conversation, or that Allen’s obvious on-screen jones for younger sexual partners, from the late 1970s onward, does not look troubling in hindsight, or that the totality of what we know or think we know about Woody Allen does not nudge us — perhaps slightly, and perhaps unfairly — toward finding Farrow’s charges plausible or at least conceivable.

As for the longer-term question of how this scandal will affect Allen’s artistic reputation, and how (or whether) people will watch his movies in the future, we can’t answer that one yet either. Two weeks ago, Cate Blanchett looked like a sure-fire slam-dunk in the best actress Oscar race for her role in Allen’s “Blue Jasmine” (a grossly overrated film, by the way). As Blanchett is now acutely aware, Allen’s artistic currency has abruptly deflated, and you can almost feel academy voters looking at Amy Adams and her cut-to-the-navel outfits from "American Hustle" with relief and gratitude. But here’s the thing: If books or plays or films can sometimes be read as biographical footnotes or psychological snapshots, they can never be limited to that (if they’re any good). They ultimately belong to the world rather than to the person who made them; they eat their own tails, cast strange shadows, reveal unexpected meanings.

This unsavory association will taint Allen’s work for a long time, I suspect, perhaps indefinitely. If you doubt that, please consider the drastically different cases of Roman Polanski, Richard Wagner and (to a lesser extent) Alfred Hitchcock, three artists of undoubted significance who have near-permanent asterisks next to their names. It’s platitudinous and also not quite right to say that Allen’s best works, like the works of those three, will endure on their merits or outlast the scandal or whatever. It’s more that films like “Annie Hall” or “Crimes and Misdemeanors” or “Husbands and Wives” (the wrenching, despairing and deeply personal picture he made the year of the alleged abuse) have already escaped any convenient categories or definition; they contain all the contradiction and self-criticism and comic torment you could want, and easily encompass the possibility that their creator has done dreadful things.

Wagner’s magnificent operas — the absolute apotheosis of the form, and the high-water mark of 19th-century Romanticism — will always bear a relationship to Adolf Hitler and the Nazis, even after many decades of musicianship and cultural scholarship aimed at decoupling them. (To this day, there has never been a full public performance of Wagner's music in the post-1948 nation of Israel, despite conductor Daniel Barenboim’s best efforts.) While the composer at times expressed virulent anti-Semitic views, he can bear no personal responsibility for the Holocaust, having died six years before Hitler was born. But the dumbed-down, ultranationalistic cult built by Wagner's heirs around his aesthetic legacy swept many people into its orbit, including a certain impressionable young Austrian. Indeed, the importance of Wagner’s work partly now lies in the undisputed historical fact that Hitler anointed himself as the composer-philosopher’s spiritual heir, as well as in the highly disputed question of how much proto-National Socialist ideology and coded anti-Semitism can be found within “The Ring of the Nibelung” or “Parsifal.”

To move from the greatest crimes of the 20th century to the private offenses of an individual is no doubt ridiculous, but I can’t believe anyone who has seen Hitchcock’s films was surprised to learn that he was something of a sexual misfit who mistreated his devoted wife and had a fetishistic relationship to his succession of ice-blond actresses. As his onetime star Tippi Hedren has recently discussed, his treatment of her while shooting "The Birds" and "Marnie" would today be considered sexual harassment, if not sexual abuse. Nearly all of that, emotionally speaking, is visible on screen. Hitchcock’s masterfully constructed suspense classics contain many levels, but we already knew they documented an intense and partly hostile obsession with a certain variety of unavailable, unfaithful and untrustworthy woman. Hitchcock's sins are far enough in the past that his reputation as a filmmaker has suffered little or not at all from these revelations. Contrast that to Charlie Chaplin, whose career was pretty well destroyed by political persecution and a series of sex scandals (involving teenage girls) in the 1940s. It took 30 years for public opinion to move past that stuff, and for Chaplin to be restored to the pantheon as one of the medium's all-time greats.

As for Mia Farrow’s old pal Roman Polanski, who is now 80 years old and has lived in Paris ever since fleeing the United States after his 1977 indictment on sexual assault charges, that event and its aftermath have long threatened to undermine his entire life and career, and he knows it. Although themes of violence, disturbing sexuality and psychic breakdown run throughout Polanski’s films, they are far stronger, generally speaking, during the years before the rape case (in movies like "The Tenant," "Repulsion" and even "Rosemary's Baby") than they have been since his return to Europe. (The other distorting factor in Polanski’s personal life, of course, was the murder of his wife, Sharon Tate, by the Manson family in 1969.) The last film Polanski made in America, before the rape of 13-year-old Samantha Geimer, was “Chinatown,” one of the greatest and darkest movies of the 1970s, a parable of rape and power that revolves around the revelation of an incestuous relationship between an aging pervert and his teenage daughter. I bet Woody Allen is grateful he didn’t direct that one.

If Polanski’s films have arguably become lighter in tone since the event that disordered his career and tarnished his reputation (with the exception of the masterful 2002 World War II drama “The Pianist”), something strikingly similar happened to Woody Allen. I don’t know how to interpret this fact, so I’ll just throw it out there: The period of Allen’s life that corresponds to Dylan Farrow’s girlhood, from her birth in 1985 to his break with Mia Farrow and the alleged abuse in 1992, may also be the most fertile patch of his creative career, from “The Purple Rose of Cairo” to “Hannah and Her Sisters” to “Radio Days” to “September” to “Crimes and Misdemeanors” and “Husbands and Wives.”

After the split with Mia (or after whatever happened with Dylan, or both), Allen abruptly shifted toward lighter-weight comedies that feel more impersonal and less ambitious. Indeed, he seems a good deal less involved and invested; four years ago at a Cannes press conference, Allen was unable to recall the title of one of his own films. Of all the movies he’s made in the last 22 years, only the tormented and self-excoriating “Deconstructing Harry,” from 1997, has that old-school Woody Allen flavor. Something changed in him almost overnight, and whether it was the sudden loss of his public reputation as a beloved bohemian avatar, guilt over the Soon-Yi affair and the family breakup or something deeper and darker I have no way of knowing. As for the movies — well, that’ll be different now, and for a good while to come. But if people still watch D.W. Griffith’s and Leni Riefenstahl’s movies, they’ll damn sure watch Woody Allen’s. That’s actually a line he might have appreciated, once upon a time.