Jon Stewart will save us! The future of healthcare may rest with "The Daily Show"

If America is ever to have a real single-payer healthcare system, it might be thanks to the "Daily Show" host 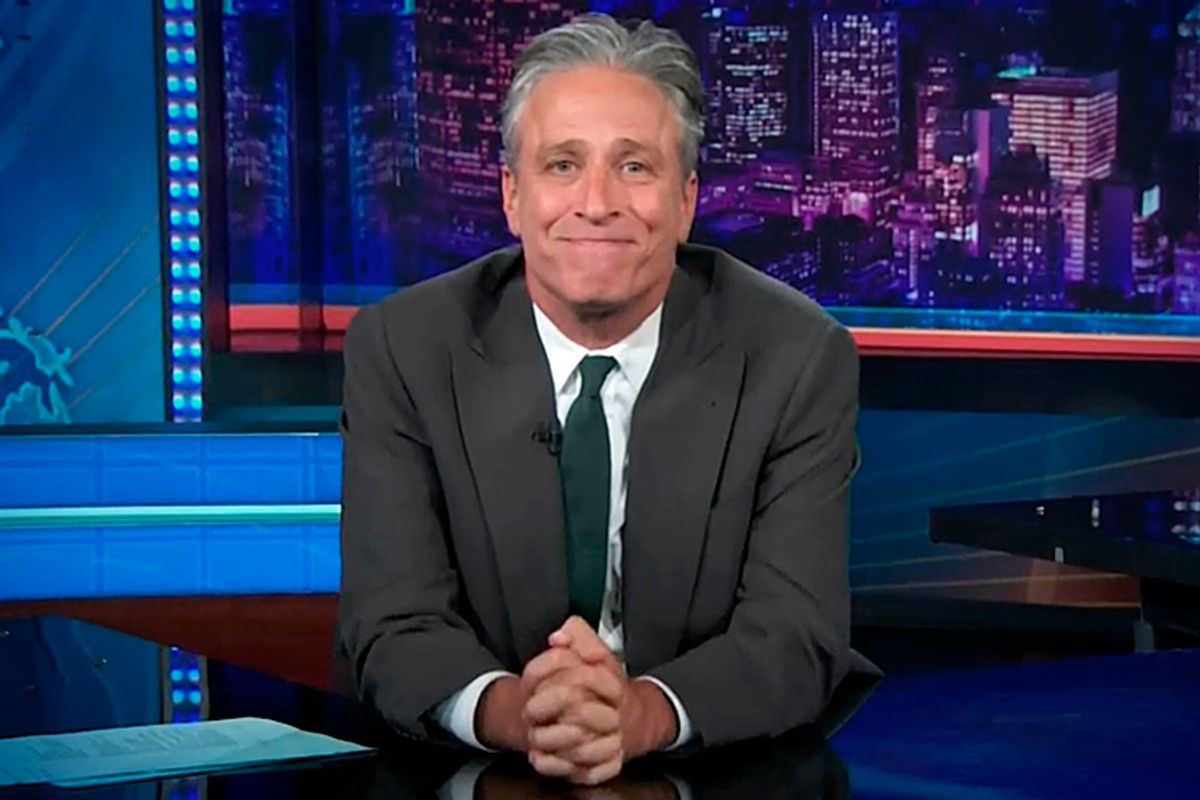 As a 12-year-old suburban kid, "The Daily Show" opened my mind and won my heart. It was an odd favorite, because I otherwise avoided politics. The cathartic laughter over revelations of American hypocrisy and that calming moment of zen at the show’s end made it possible to learn about our government’s failures while staying optimistic. I never thought I’d someday be 26, still watching "The Daily Show," and struck by this idea: Jon Stewart will help save America’s health care system.

When Stewart is not interviewing Scarlett Johansson or Johnny Knoxville, he’s building a strong case for why we must fight for a truly humane, affordable health care system – a single-payer universal health care system that substantially upgrades Obamacare. Thanks in part to guests like Johansson and Knoxville, "The Daily Show" is a megaphone reaching the key 18 to 49 age demographic; it ranks first in all of current late-night TV for winning our age group’s hearts and minds.

Back in October 2013, the U.S. Secretary of Health and Human Services, Kathleen Sebelius, appeared on the show to sell us whippersnappers Obamacare insurance. Obamacare depends on young, healthy folks to enter into its marketplace and balance the costs of older and sicker citizens.

“Young people,” said Sebelius, “are one fall on the basketball court, one auto accident away, from a lifetime of hospital bills they can’t pay.”

Sebelius’ nudge felt almost endearing, like the effort of a concerned mother to protect her kin. But one must ask, how reformed is Obamacare if it will leave any of us or our loved ones vulnerable to “a lifetime of hospital bills” we “can’t pay”?

“We don’t get to pick and choose when we get sick,” Sebelius continued. “You’re more likely to live sicker and die younger without insurance.”

“Exactly,” Stewart said and spiked the conversational volleyball, “which is why I don’t understand the idea of staying with a market-based solution for a problem where people can’t be smart consumers.”

Stewart’s televised argument for single-payer grows stronger every day. In a Jan. 16 interview on "The Daily Show," writer Steven Brill exposed Obamacare’s failure to control health care costs and bloated CEO salaries. Brill is the journalist behind the 2013 Time article “Bitter Pill: Why Medical Bills Are Killing Us,” which reveals how 60 percent of personal bankruptcies are due to medical bills. Most of these bankruptcies fall on the backs of ordinary, unsuspecting Americans with insurance.

“So what this new system does is bring more people into this deteriorating building,” Stewart said provocatively.

In countries with single-payer, such as Canada and the U.K., not one single citizen ever goes bankrupt over medical bills. People live longer and pay less, covered from cradle to grave under single-payer’s founding principle: health care is a human right.

“There must be a way for government to earn back the trust of the people,” Stewart said as he kicked off his interrogation of House Minority Leader Nancy Pelosi on Jan. 30.

“Public sentiment is everything,” Pelosi deflected.

Pelosi is right about people power, and "The Daily Show" is part of that equation.

“Single-payer,” Stewart had said to Sebelius, “simplifies this whole gobbledygook and creates the program that I think America deserves.”

He then stood up, placed his hand to his heart, and sang “Proud to Be an American.”  The studio audience howled, cheered and applauded in a showing of great “public sentiment.” Just imagine when Stewart’s 1.6 million nightly viewers hit the streets with a rallying cry and do the same.