What Cate Blanchett should say if she wins the Oscar 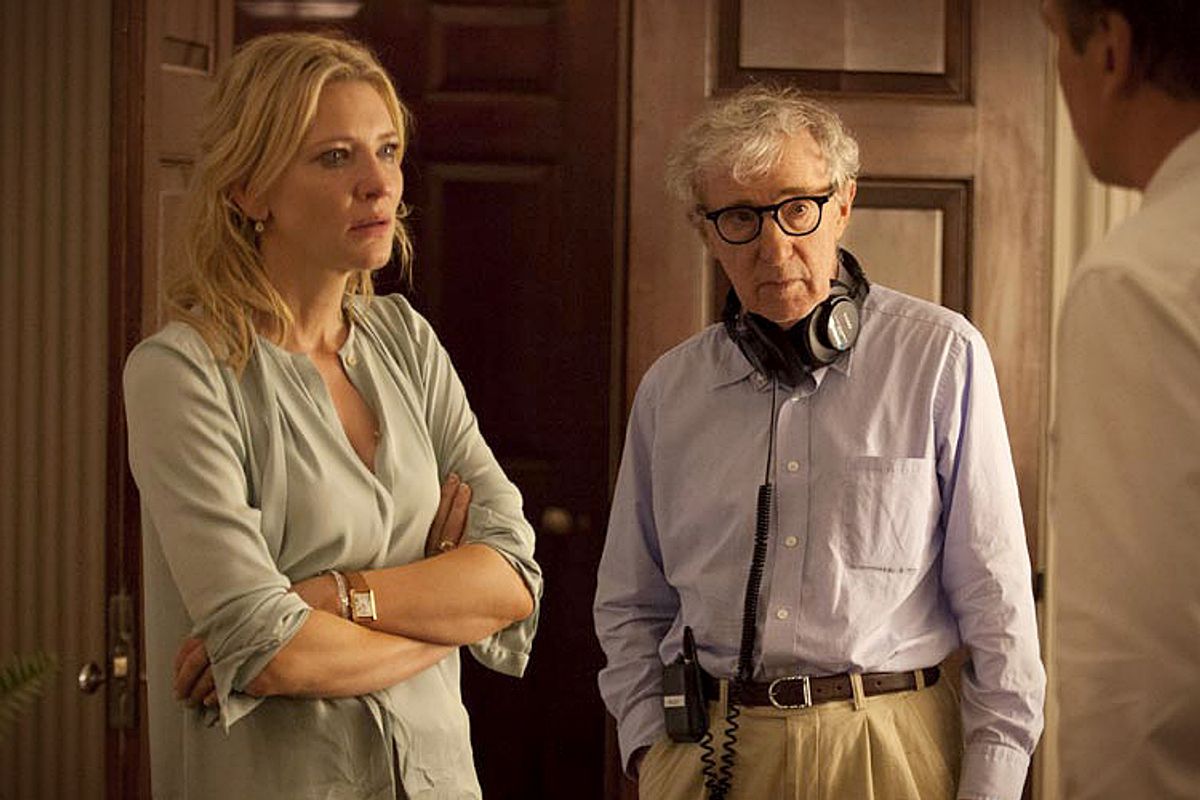 The ongoing controversy over the allegations of molestation against Woody Allen was kicked off by his receipt (in absentia) of a lifetime achievement award at the Golden Globe Awards. And Allen's spectral presence may well dominate the Oscars as well.

Allen's most recent film, "Blue Jasmine," is thrice-nominated for Oscars; two of its nominations, for Allen himself in a screenwriting category and for Sally Hawkins in the best supporting actress race, are widely perceived as long shots. But Cate Blanchett, who has already won the Golden Globe and the Screen Actors Guild Award for the title role, has long been widely perceived as miles ahead of the competition in the marquee best actress race -- so much so that, making no reference to the Allen scandal, New York magazine's David Edelstein recently exhorted Oscar voters that Blanchett's "lock [...] could stand loosening," in favor of perpetual also-ran Amy Adams.

It's Adams, too, who surfaced as the prime alternative to Blanchett in a New York Post article speculating about the possibility that Oscar voters might throw their votes in another direction given the allegations against Allen. And suddenly, what had looked in her first two major acceptance speeches like gracious acknowledgement of a Hollywood legend seems like the biggest strike against Blanchett.

Blanchett may very well win the Oscar. In last year's best actress race, pieces kept cropping up after the Golden Globes and SAG Awards speculating that the season's perennial winner, Jennifer Lawrence, might be unseated at the Oscars by Emmanuelle Riva (for, it must be noted, far less serious reasons), and yet Lawrence's early momentum carried her all the way to the Oscar stage with only a brief stumble. But how can Blanchett, speaking to all of Hollywood and a wide swath of America, thread the needle of good taste?

At the Golden Globes, before the bizarre Diane Keaton tribute to Allen had made its impact felt, Blanchett paid tribute to past Allen actresses including Mariel Hemingway (who played Allen's teenage girlfriend in "Manhattan") and Dianne Wiest, playing into the evening's general theme that Allen's existence was a good thing for actresses, and for women. She sent warm wishes "to Woody Allen, who writes these things and directs these things with such alarming regularity that we sort of almost take him for granted. [...] So thank you, Woody, for calling me, and for calling [some] of the other incredible women who are in the room this evening."

It was, depending on the angle of approach, either a factual and lovely tribute to the director with whom Blanchett had worked and who had, indeed, given Hemingway and Wiest their best roles ever, or missing the point in exactly the same manner as had Keaton. For all the roles Allen had given women, wasn't his greatest muse sitting at home in Connecticut remembering alleged family traumas -- to say nothing of another woman, Dylan?

This conundrum wasn't resolved at the SAG Awards, during which Blanchett thanked "Woody, for writing role after role after role for women, and then giving them the space to create them. Thank you so much, Woody."

Blanchett, as the unusually long 2014 awards season -- one in which the Oscars moved into March to accommodate the Olympics -- has worn on, gave a little clarity this past week. At the Santa Barbara Film Festival, one of those pre-Oscars events that exist to fete stars, Blanchett was approached by a reporter. This was just after she'd been mentioned by name in Dylan Farrow's open letter, and Blanchett was brief: "It's obviously been a long and painful situation for the family and I hope they find some resolution and peace."

Her more powerful statement came earlier in the evening, when she gave an acceptance speech that mentioned various personages involved in the making of "Blue Jasmine" -- but not Allen, once. One gossip site spun this as "shade" and a "dismissal."

It's hard to believe that Blanchett was attempting a "shade" takedown of Allen -- with the rancor that implies -- in not mentioning him at a random, tiny media event, when she'd taken opportunity of bigger spotlights to thank him profusely. It's more likely that she was trying to shore up her chances of winning an Oscar by alienating as few potential voters as possible in light of new turns in the Allen saga. (At least one awards pundit alleged before the film festival that Dylan Farrow's open letter would hurt Blanchett's chances.) Who knows what her Oscar speech, once she no longer has to appeal to voters, might contain.

And yet no matter how much Blanchett feels that Allen -- a notoriously uninvolved director when it comes to actors' performances, for whatever that's worth -- deserves credit or a tribute in her potential Oscar speech, it'd be better to hold off.

The Santa Barbara acceptance speech ought not to be simply a gambit to win an Oscar, but the template Blanchett follows if she does end up winning. In winning her first Oscar, Blanchett paid tribute to Martin Scorsese briefly at the end of her speech. It was a lovely moment that felt earned, because Scorsese is a beloved figure, and rightly so. Perhaps Blanchett's refusal to thank Allen could be the first step toward artists reevaluating why it is they want to work with someone against whom allegations have existed for decades, an acknowledgment that to accept a role because it helps one's career, even as further career success for Allen obfuscates whatever may be the truth, is problematic.

It's often brought up that those who object to Allen's continued success can vote with their dollars. And that's true to a degree. But how much does one person's principled stand against spending $13 on a ticket to "Blue Jasmine" or giving a film studio pennies by streaming "Play It Again, Sam" on Netflix really matter? The people with the influence to stop Woody Allen's career, if that is what we want, are the people of Hollywood. Cate Blanchett doesn't need to apologize simply for working with Allen. But she can signal, as she already has, that new information has made her question her decisions, and that others can learn from her going forward. It would be a moment of truth breaking through awards-season cant, worthy of an ovation.