Emergency contraception is supposed to be available to teens, but pharmacists are telling them they're too young 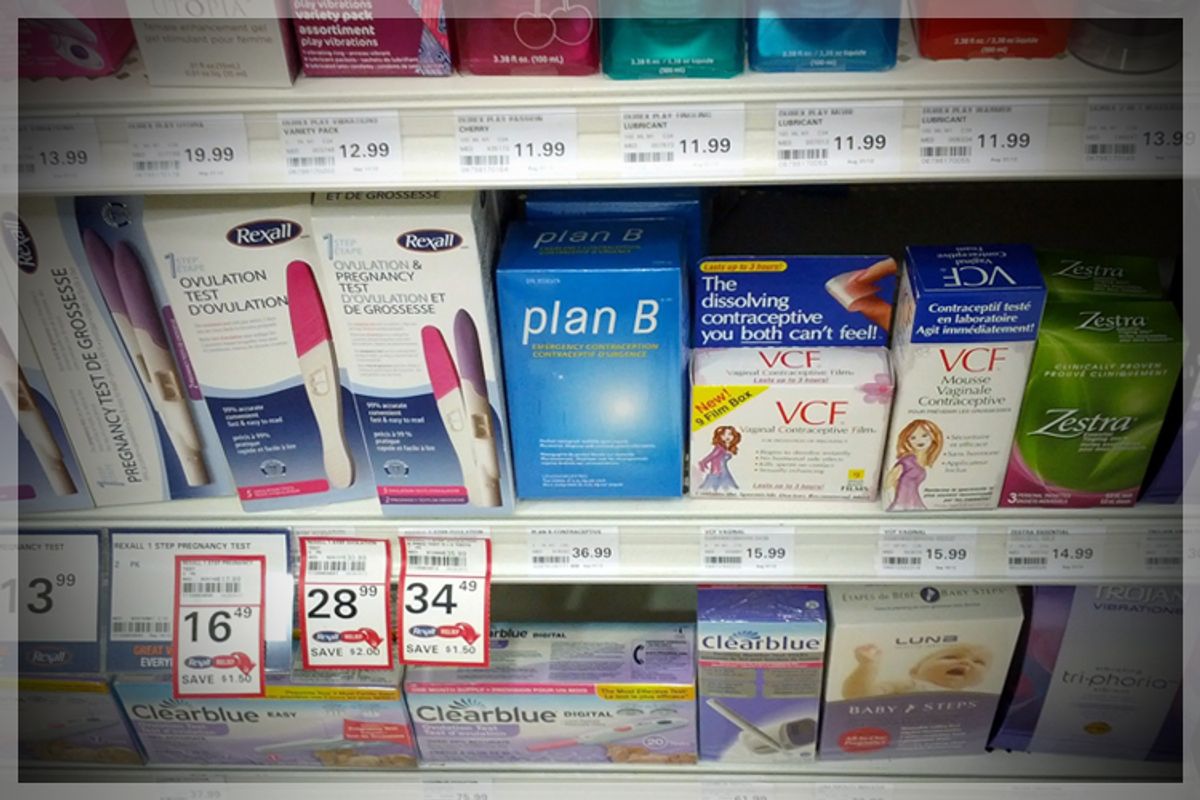 In spring 2005, at the not-so-tender age of 26, I was on the receiving end of my first (and only) condom malfunction. The incident sent me into a frenzied state of paranoia that had me up all night and found me and my partner bleary-eyed early the next morning at the university emergency clinic in my town, in desperate need of some emergency contraception. This was during the days of the Bush administration, before Plan B -- more popularly known back then as the “morning after pill” -- was available over the counter. To get it required a prescription and to get a prescription usually required a medical appointment and examination.

In order for me to get Plan B, I had to have a pelvic exam and then sit there while a well-meaning but patronizing nurse subjected me to a speech on how to properly use a condom, complete with a step-by-step demonstration involving a plastic speculum. I was well into my 20s and had used condoms countless times without any problem (as I told the nurse before she launched on her lecture). But sometimes condoms break, which is when Plan B comes in handy. That is, if you can actually get your hands on it.

Even though it was first approved for prescription use in the United States in 1999, Plan B did not become available over the counter until 2006 for women 18 and older. The age requirement was then dropped to 17 in 2009. Age restrictions were finally dropped altogether this past July as mandated by a U.S. District Court Judge -- despite much resistance and an appeal by the Obama administration’s Department of Justice. However, as part of a compromise reached by the court and the DOJ, this ruling only applied to Plan B One Step. Generic brands -- which are often cheaper--would still only be for sale at pharmacies without a prescription for those over 17 and with a government-issued ID.

But even before age restrictions for Plan B One Step were dropped, research has indicated that pharmacists were misinforming teenagers about the rules regarding its access. At least, those are the findings of a study published in December in the Journal of Adolescent Health.

In the study, researchers called pharmacies in several different cities around the country posing as teenage girls seeking emergency contraception. Approximately 20 percent of the pharmacy staff they contacted wrongfully informed the callers that because they were teenagers they could not legally have access to emergency contraception at all. Of the remaining 80 percent of respondents, only about half of them got the exact age requirements for Plan B correct.

Even more interesting were some of the other things pharmacy staff told the callers. Many cited ethical reasons or personal religious beliefs for not offering the medication. Other pharmacists inaccurately told the callers that a parent or guardian would have to come with them to pick up the medication (even if they had a prescription) or that an older friend or boyfriend above the age restriction could not buy Plan B over the counter for them. In fact, some callers were even told Plan B wasn’t sold to men, which also isn’t true.

Though this study was conducted before age restrictions for over-the-counter Plan B One Step were dropped, its implications are still current.

“Our society is pretty uncomfortable about sex and very little healthy sexual decision making is portrayed in the media, so there seems to be a lot of judgment in these situations along with all these rules and restrictions,” said Dr. Tracey Wilkinson, a pediatrician at the Children’s Hospital of Los Angeles and lead author of the study.

Wilkinson first became compelled to do the study when she noticed that some of her teenage patients were having difficulty getting their Plan B prescriptions filled because pharmacists either didn’t stock it or refused to fill it. Even patients who were 17 or older reported having trouble buying it over the counter.

“We have fought some really big battles and [Plan B] is now available over the counter. Yet there are still a lot of barriers to actually getting it,” said Wilkinson.

Megan Kavanaugh, a senior research associate at the Guttmacher Institute -- an organization  that researches and advocates for reproductive health and rights -- found the results of Wilkinson’s study “discouraging, but unfortunately not very surprising.”

Kavanaugh notes that among women who are sexually active, teens have some of the highest rates of unintended pregnancy. When used correctly, Plan B is 95 percent effective in preventing unintended pregnancies if taken within 24 hours of unsafe sex and nearly 90 percent if taken within 72 hours. And yet, teenagers aged 15-19 only comprised 14 percent of the 5.8 million women who used emergency contraception between 2006 and 2010, according to Centers for Disease Control statistics.

“There is clearly a need among teenagers to be able to access emergency contraception given their increased risk,” says Kavanaugh.

Kavanaugh also suggests that dropping the age restriction for just Plan B One Step while keeping it in place for the other brands has likely added to the confusion for both teenagers and pharmacists, making access to emergency contraception more difficult than it should be.

To see what might be going on now that the law has changed again, I decided to investigate a bit on my own. I called up a dozen different pharmacies in several different cities and asked if I could get Plan B. I also asked how old I would have to be to get it. The results were not very heartening.

Half of the pharmacies I called didn’t have any brand of emergency contraception in stock. A pharmacist at one of these locations even brusquely informed me that his pharmacy never stocked Plan B and that he didn’t know where I could get it, before abruptly hanging up. When I inquired about the age requirements for Plan B at these pharmacies, the responses I received were all over the map including “16,” “17,” “16 or 17,” “17 or 18,” and even “18.” Only one pharmacist cited the new law in informing me there was no age restriction for the main brand.

Still curious if age was the only barrier, I visited my family-owned neighborhood pharmacy in the Boston suburbs and found that it also didn’t stock any version of Plan B (it also does not sell condoms). I then ventured to a few of my local CVS chain stores, where I did find Plan B One Step on the shelves, but displayed in a locked plastic box. To get it required going up to the counter and requesting it, something that could be a harrowing prospect for a teenage girl.

“When a woman fears she might become pregnant, she needs fast access to emergency contraception, not delays or misinformation at the pharmacy counter,” says Dr. Deborah Nucatola, senior director of medical services at the Planned Parenthood Federation of America.

“The bottom line,” says Nucatola,“is that all women should have accurate information about the full range of contraceptive options and be able to access the best method of emergency contraception for them quickly and without barriers.”