The skater's uncensored shock shows us what losing really looks like, and inspires #wagnerface 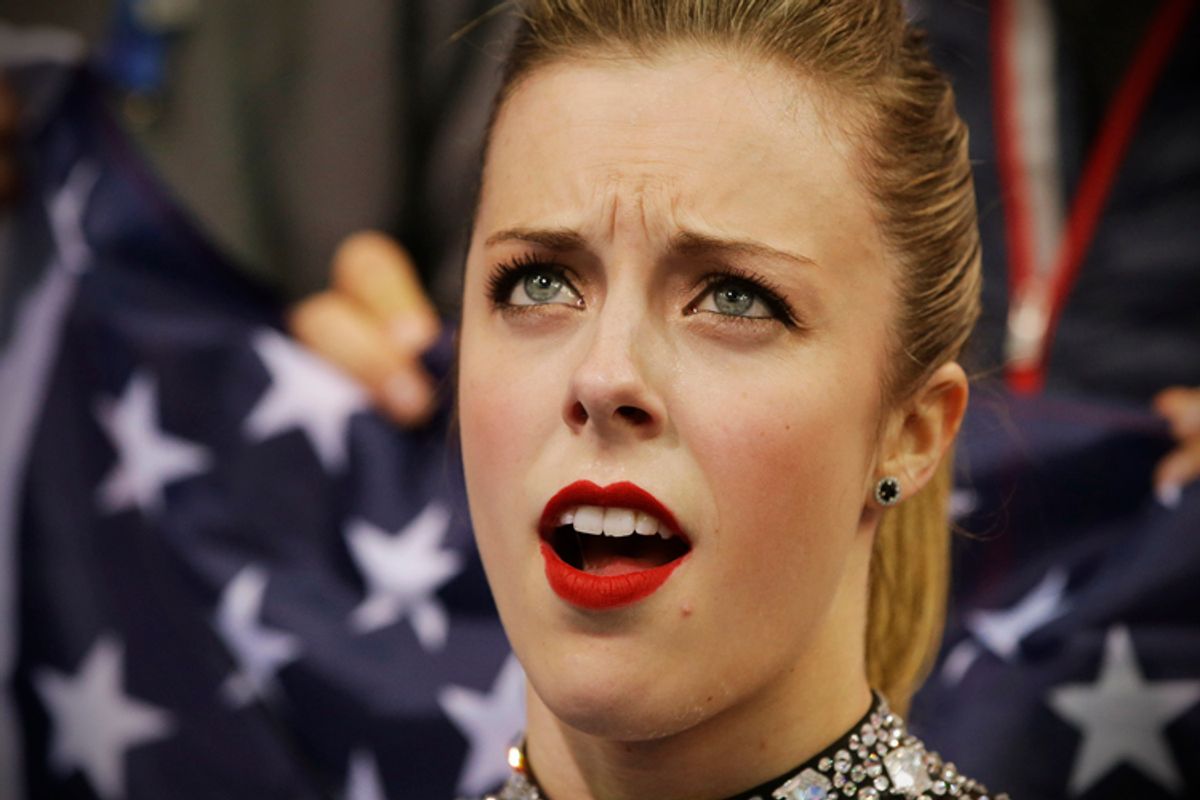 When the eyes of the entire world are trained on you during the most high stakes moment of your career, you'd be forgiven for not keeping a poker face. In fact, maybe a naked expression of WTF-ness is just what's called for. So thank you, Ashley Wagner, for bringing an honest moment of "This sucks" to the field of international competition.

The 22-year-old figure skater was, until this weekend, best known as a two-time U.S. National Champion and Olympic hopeful to watch. She's a bold, confident skater who on Saturday tweeted from Sochi, "I. Belong. Here." and told the Washington Post last month, "I'm in this to be remembered." And remembered she will be.

In what has gleefully been seized upon as the most meme-worthy moment of the Winter Olympics so far, Wagner went from all smiles after her Saturday performance to a head-shaking gasp after she received a very disappointing 63.10 from the judges. She had skated a powerful routine to Pink Floyd's "Shine on You Crazy Diamond," but wound up knocked into fourth place, behind Japan's Mao Asada -- who had fallen during her routine. And when her score appeared, Wagner did not go the stiff-upper-lipped Academy Award snub-ee route and gamely applaud and smile through the pain. She did not appear overjoyed at a lesser place. Nope, she winced. She let her jaw drop. She shook her head no and plainly mouthed, "Bulls___t." Forget the defective Olympic ring  drama, Bob Costas' funky eye, or even those busted bathroom doors -- Wagner's face captured what the games are truly about: the agony of defeat. Or more specifically, the agony of not winning -- she did still manage to snag a team bronze. And in a few seconds, #wagnerface became a thing.

After her post-performance performance, Wagner quickly found herself  facing comparisons to that other Olympic grumpy cat, McKayla Maroney. Maroney, you will recall, is the gymnast who at the 2010 London games would make the word "unimpressed" forever as much hers as "bootylicious" will ever belong to Beyoncé.

The more typical narrative of sports is one of what is narrowly defined as sportsmanship. It involves a brave face and an "I did my best for my team" script to reporters. But even a moment of triumph can be an opportunity for an uncensored display of unexpectedly raw emotion, as the Seattle Seahawks' Richard Sherman amply demonstrated last month. When the results are defeat and the reasons clear-cut – a goal not made, a time not met – any subsequent expression of frustration is at least generally self-directed. But throw in the element of judging and it becomes something else. On Yahoo! Sports Sunday, Lawrence Yee did a bang-up job explaining how Wagner's score wound up where it was, and the technical reasoning behind it, but it doesn't negate the nagging question of whether, as Wagner herself might put it, her score was ultimately bulls___t.

Four years ago at Vancouver, Russian skater Evgeni Plushenko declared, "I was sure I'd won," but took home only the silver. He accepted his medal with a kiss and a visible sigh while Evan Lysacek beamed gloriously. His assessment of the way the medals were handed out? "Obviously, Evan needs the medal more than me, maybe because I've got one already." Ouch. And in 2009, Serena Williams famously went berserk on a line judge at the U.S. Open, threatening to shove a ball in an uncomfortable place. Why did she lose it like that? Though few of us will ever know what it feels like to skate at the Olympics or play the U.S. Open, I suspect many of us can relate to Williams' maxim: "I hate losing more than I love winning."

Compared with those more famed displays of unabashed displeasure, Wagner's was a more restrained expression of shock. She's handled the attention good-naturedly so far, expressing gratitude for her bronze and retweeting her own "Before" and "After" faces. She's shown the world that sometimes you can work very hard and perform very well and still not get what you want. It's not always possible to smile through that. Sometimes, you just have to shake your head and call BS before you can suck it up and say thank you and accept your consolation prize. It's just being human. It's true for Ashley Wagner. It's true for all of us.