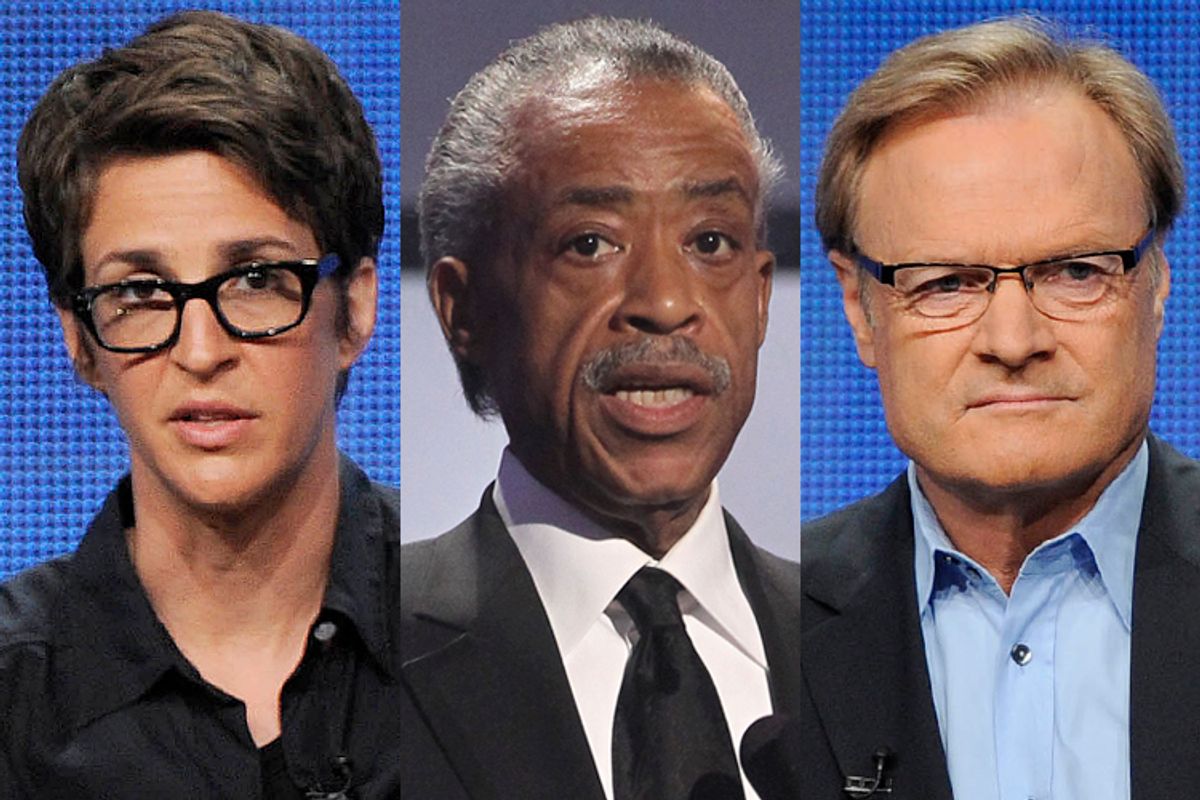 Workers from an NBC-owned company will head to MSNBC’s “30 Rock” headquarters later this week, in hopes of delivering a petition and securing an audience with primetime hosts who’ve so far been silent about their struggle.

“Frankly,” said Writers Guild of America – East Organizing Director Justin Molito, “if we don’t have people overcoming their personal fears and speaking out that are in such high-profile positions as MSNBC hosts, what does that say about the climate of fear at NBC?”

Peacock Productions workers and fellow WGA-E activists plan to show up at 30 Rock on Thursday with petitions addressed to five MSNBC anchors: Rachel Maddow, Lawrence O’Donnell, Al Sharpton, Ed Schultz, and Chris Hayes. Molito told Salon the activists will ask for the hosts to be paged to come downstairs and personally receive the letter, which was backed by the AFL-CIO and hosted by MoveOn, and now boasts 10,000-some supporters.

Maddow, O’Donnell, Sharpton, Schultz, Hayes, and NBC did not respond to Friday inquiries, or to past requests for comment on the Peacock Productions dispute.

As Salon has reported, Peacock writers and producers began organizing with WGA-E last year, an effort they charge was met with a Wal-Mart –style union-busting campaign: mandatory anti-union meetings, retaliation against activists, and warnings that unionization could destroy the business. “It was made very clear to the whole company that the group of people who were interested in joining the Writers Guild could actually bring down the whole company,” Peacock worker-activist David Van Taylor told Salon in December. The National Labor Relations Board held a unionization election last June, but impounded the ballots from that vote due to an appeal from Peacock, which argued that employees involved were in fact supervisors ineligible to unionize under federal law.

Peacock clients include MSNBC and CNBC, as well as channels like A&E, Discovery, and E! Like MSNBC, Peacock Productions is owned by NBC-Universal. In an August statement provided to the LA Times, the company said, “We believe that Peacock’s producers hold meaningful supervisory authority, which, according to Federal Labor Law, excludes them from voting.”

Charging that NBC’s “union-busting,” “voter suppression,” and exploitation of GOP Labor Board obstruction defied the values promoted on MSNBC, the WGA-E has urged the five targeted hosts to publicly support the Peacock workers. “Employees who stick their neck out to fight for collective bargaining every day,” argued Molito, are “taking much greater risks than these hosts would be to speak out in favor of collective bargaining and organizing…”

While none of the five has publicly and specifically addressed the Peacock dispute, several people present told Salon that Hayes held a private meeting with Peacock workers at WGA-E’s office. (Molito said there had been no other meetings with hosts that he could disclose.)

In contrast, Schultz responded to Salon’s inquiry about the campaign with a December 10 e-mail: “Moveon.org has never been an ally of Ed Schultz, why should I help you with a story? Give me a reason.” Following online criticism for that response (printed by Salon December 12), Schultz suggested on his radio show that his critics had “class envy,” blasted “media wannabes,” and asked “why should I put myself in jeopardy through an e-mail.” Without mentioning Peacock Productions, Schultz opened his December 17 TV show by telling viewers, “I’ll look you right in the eye tonight and tell ya that I support workers in every workplace in America when it comes to fair share, collective bargaining, and the vote. Are we crystal clear on that?” After saying “I’ll look you right in the eye – lots of trusting going on these days, lots of calculation going on as well,” Schultz then shifted to asking whether Republicans could be trusted to extend unemployment benefits.

“We’re speculating that there’s a level of fear and concern” among the hosts, AFL-CIO organizing director Elizabeth Bunn told Salon in December, but “what we’re hoping is that if they meet individually or collectively” with the Peacock workers, “as a group, they will speak out and exercise their collective voice just like workers at these production companies have exercised their voice in seeking to form a union.”

While the hosts from whom WGA-E seeks solidarity don’t have a union contract of their own, another group of TV personalities within NBC – Universal used to. In 2006, a bargaining unit made up of NBC Network correspondents and staff voted, 24 to 12, to cease being represented by the American Federation of Television and Radio Artists; Variety reported that the move was motivated by “worries over dues and the strength of the health and retirement plans …” SAG-AFTRA (the product of AFTRA’s merger with the Screen Actors’ Guild) did not respond to a Friday inquiry. In a statement at the time, NBC Universal hailed those employees’ choice to go non-union: “NBC Universal has many nonrepresented on-air employees and this group from NBC News will join their colleagues at MSNBC, CNBC and others at our television stations. We are grateful for the trust our employees have placed in the company.”