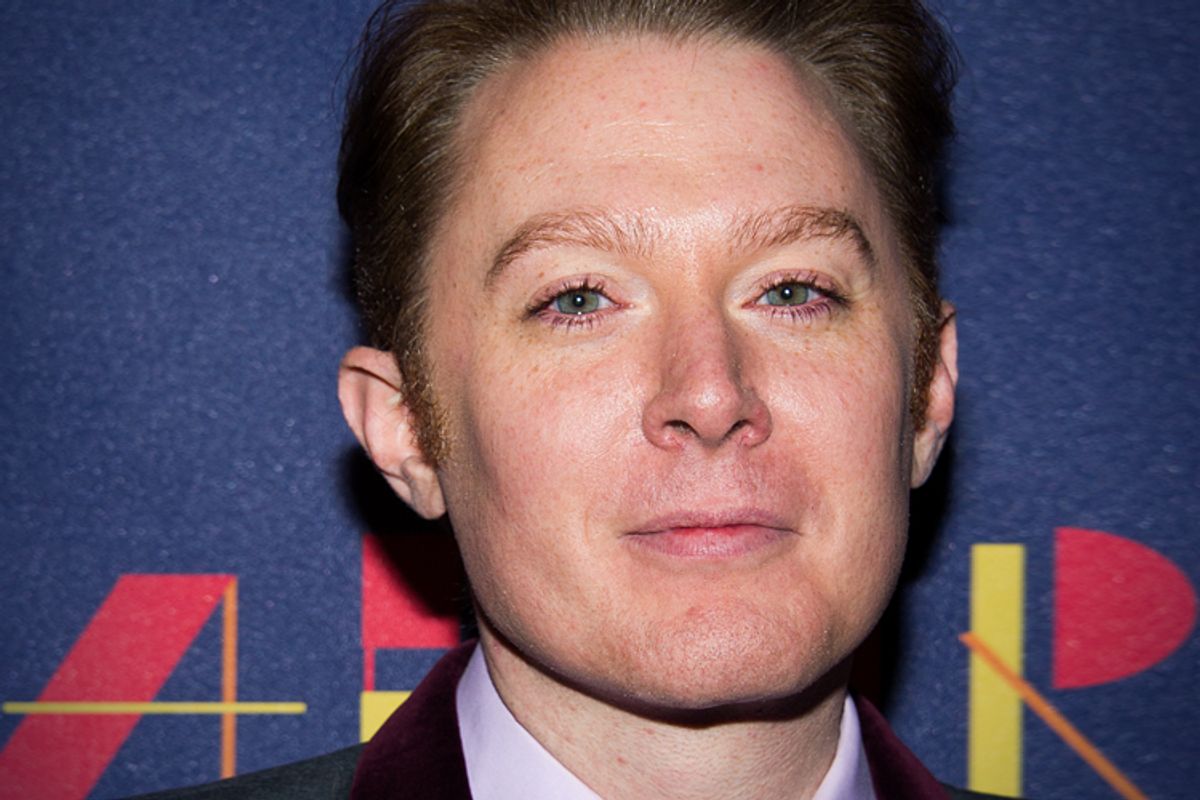 With a web video announcing a bid for Congress, former teacher and "American Idol" runner-up Clay Aiken became the most famous challenger of the 2014 cycle. Incumbent Congresswoman Renee Ellmers, R-NC, quickly dismissed the challenge, with a spokesperson calling Aiken “a performer whose political views more closely resemble those of San Francisco rather than Sanford” – a line critics called a reference to Aiken’s homosexuality. Mitt Romney received 58 percent of the district’s vote in 2012.

“When I see that we are not being represented,” Aiken told Salon Friday, “it frustrates me in the same way that it frustrated me when I saw those kids in that special needs classroom not being served.” Aiken accused Congress of “punishing” the unemployed while acting to “exacerbate” unemployment, condemned the Roberts Court’s ruling rolling back parts of the Voting Rights Act and urged that companies that offshore jobs be barred from federal contracts. He declined to say whether he’d back congressional Democrats’ proposal for a $10.10 minimum wage, and expressed “reservations” about executive orders, including when it comes to anti-gay discrimination. A condensed version of our conversation follows.

You talk in your announcement video about your family’s confrontation with domestic violence, and about your work in education. How do those experiences shape what you’d do on those issues in Congress?

My work experience as a special ed teacher started, really, because I saw firsthand how those particular populations get underserved, and how they get ignored too much. And so I used my platform as an entertainer to deal with, to try to address, the needs of kids with special needs…

I think pre-K for children is an incredible way to start trying to make sure that kids are getting an adequate education, and making sure that pre-K is available for 4-year-olds and children getting ready to start school. Because getting kids in the process of learning, and understanding how to learn -- learning how to learn -- is just as important oftentimes, in those early years, as the ABCs are…

The quicker we can address some of the learning challenges that kids have, the quicker we’ll be able to get them better prepared and educated and ready to go to higher education settings like colleges or community colleges.

If you hadn’t been on "American Idol," do you think you’d be running for Congress right now?

I don’t know that I aspired to be in politics, though, no. I mean, this was not a goal of mine. This was not a part of my original life plan. But having done television, and having been able to be in the public eye, and get a platform and a microphone, so to speak -- both figuratively and literally -- I have an opportunity to speak and have people listen, you know? I don’t think many potential congressmen or congresswomen -- or even incumbents -- get a chance to talk to folks like Salon, or folks you know – [like] the New York Times – or the opportunity to speak now on such a wide level. And send the message that Congress is broken, and Washington is broken, and people are not doing anything at all, and people are frustrated.

And so, when I see that they are not being represented, when I see that we are not being represented, it frustrates me in the same way that it frustrated me when I saw those kids in that special needs classroom not being served. And I recognize that I have that voice that was given to me by a TV show, and have that opportunity to speak out. And I want to use it for the people who helped put me here.

Last year North Carolina passed what The Nation called “the country’s worst voter suppression law,” creating a “voter ID” requirement, ending same-day registration, and reducing early voting. Do you support any part of that law? Do you think it should it be overturned in court?

We’ve heard representatives from North Carolina speak out and very openly admit that a large part of the motivation for those laws was to keep certain people from voting. Disenfranchising voters is not the way we encourage people to be a part of the democratic process.

I don’t think that there’s substantiated evidence that shows that voter fraud is such a rampant problem that we have to put in place measures that people have to pass in order to exercise that constitutional free right. Voting should be -- and is required to be -- a right that is unencumbered. That does not have tests that people must pass, like we asked people to pass literacy tests in the early half of the last century.

We know that that’s not right, because it’s – voting tests, literacy tests and that type of civic test were ways to keep people from exercising their constitutional right to vote. Anything put in place to restrict that right, or to make it more difficult for people to exercise it, should be outlawed, and should not be allowed.

Last year, the Supreme Court found parts of the Voting Rights Act, making it harder for jurisdictions including North Carolina to pass potentially discriminatory voting laws, to be unconstitutional. Was the Supreme Court right?

You know, I find it somewhat ironic that someone could -- that any group could say that this law has been so effective that we no longer need the law. By that logic, if the law is effective, then it needs to stay in place – because it is effective. And for that reason I don’t follow that train of thought.

If something is effective, then we need to maintain it. By taking away those protections, we are simply opening the door for the same type of persecution to take place again.

We just saw data released showing 10 million workers unemployed in January, a third of whom have been unemployed for at least six months. What, if anything, should Congress do about this?

Well, we saw the unemployment number creep down a little bit today, and I will be the first to say I don’t think it’s going down as quickly as we want it to.

While Congress is in large part the problem, and the reason that the unemployment numbers are not improving, and the job market is not improving -- and I think that they’re part of the problem because they’re not doing anything to get anything done. You know, they’re obstructing, they are sitting around, they’re not working together to find solutions.

Since Congress -- to me, and I think to the majority of American voters -- is the problem, and they are the reason…these improvements that we seek are not being realized, I do believe that it is incredibly disappointing that they have not voted yet to extend unemployment benefits for the long-term unemployed.

And what are the policies that Congress should be passing in order to address unemployment?

We have to make sure that we are keeping jobs in this country. I mean, I would like to see the tax breaks, and the loopholes that corporations can take advantage of in the tax code for shipping jobs overseas – I want to see those closed. Tax deductions for the moving expenses…that a company incurs when they move those jobs overseas -- we shouldn’t let companies be taking tax breaks for that kind of thing.

At the same time, I believe that the U.S. government should not be entering into contracts with companies that the Department of Labor has determined ship jobs overseas…

Are you urging the president to sign an executive order that would preclude contracting with companies with certain outsourcing records?

You know, I am hesitant of executive orders. And, I mean, I’m the first to admit that I’m not the most educated about the ins and outs of that type of executive order. But I will say I am hesitant to ask for anyone to sign an executive order, because I understand how temporary that ends up being. And creating laws based on one person means that the next person who’s in office, whoever that may be, has the right to overturn it. And then we end up with just as much instability -- or potentially just as much instability -- as we have now…

For that reason, I understand the desire for Congress to act and get something done, because it provides more permanence. And so I can’t really answer and tell you whether or not I would encourage him to sign an executive order, but I will say that my belief right now is that I do have some reservations about executive orders in general.

What about the call for Obama to sign an executive order to ban anti-LGBT discrimination under federal contracts – do you support that?

Would you support the version of the Employment Non-Discrimination Act that passed the Senate?

The answer is yes. That we need to make sure that the laws we’re passing are protecting people. And we should not be voting against something that makes progress just because it doesn’t make as much progress as we’d like to see made.

As much as I might like to see any number of issues progress in larger steps, I understand that some of these things happen in smaller steps. And so for that reason, progress is progress. And success is success.

What do you believe should be the federal minimum wage?

People are not being paid enough, and we have not increased the minimum wage -- and we should be incentivizing the people who go to work. We should make working full-time something that will pay a living wage.

That said, I’m not sure that the minimum wage is the only way to solve that problem. I think we need to take a hard look at how to get the Earned Income Tax Credit back up to where it should be, and be incentivizing people in that way as well.

We need to make sure that we are doing it in a way that companies are still hiring people. And we need to make sure that – there’s no answer to any question that relies on only one side or the other. And for the last three years, we’ve spent too much time doing nothing because neither side will budge. I believe personally that the minimum wage should be increased. But I understand that there’s a need to meet in the middle somewhere, and make sure that it affects everyone positively. And so I think minimum wage increase is not the only answer.

The proposal from congressional Democrats for a $10.10 minimum wage – would you vote in favor of that?

Again, I can’t answer it any differently than I did before. I don’t know precisely what the minimum wage should be. Because I think that a lot of this – a lot has to be looked at.

Personally, I think that a $10.10 minimum wage seems to be a reasonable place to start. But again, I don’t think it’s the only answer. And I think that we have to listen to the arguments from both sides and figure out what’s best. And that isn’t always from one side or the other.