GOP steps in Obamacare trap: Watch their false claims blow up in their face!

For the right, attacks against Obamacare's market disruption were great fun. Until it doomed their own plan. Oops 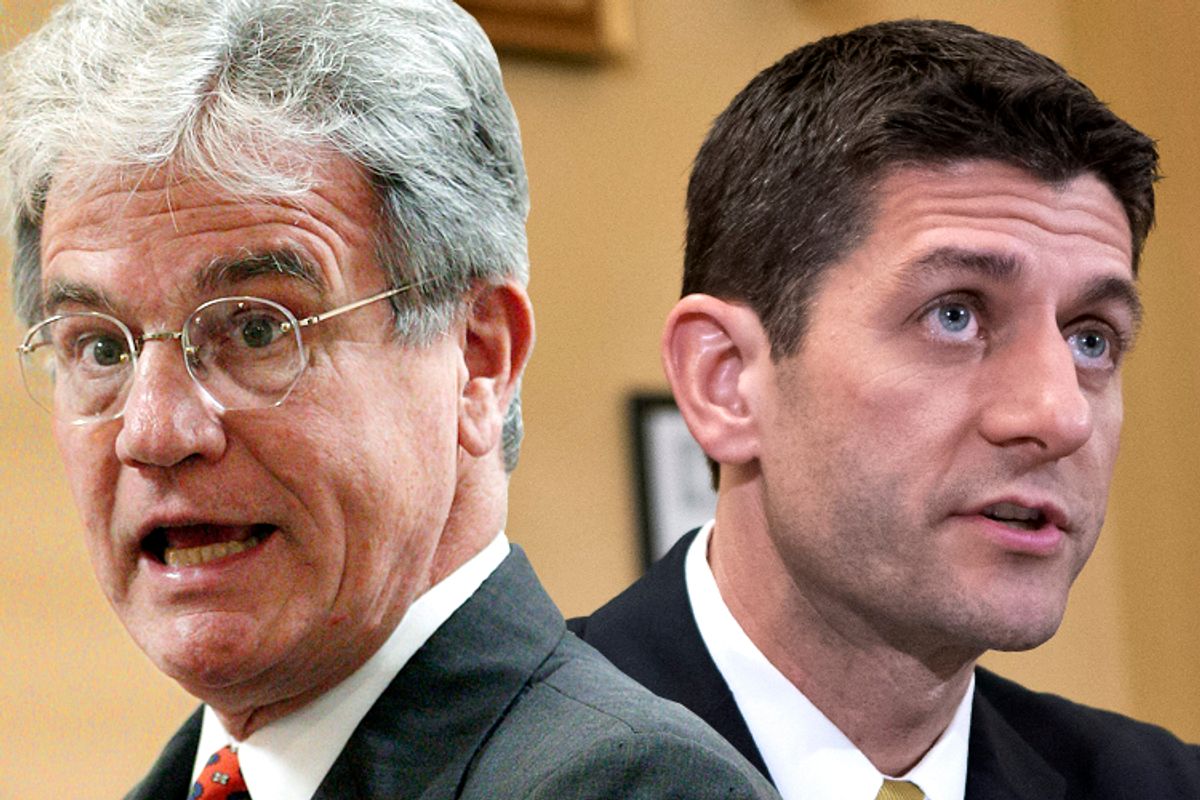 Late last year, when conservatives everywhere were grieving publicly for each American who'd received a cancellation notice from a health insurance carrier, the smartest among them realized they had a small problem on their hands.

The wave of cancellations made for great politics, and it was a joy to watch the public's trust in Obama crater for having promised everyone that they could keep their plans. But by turning an insurance market disruption into a political liability -- and a normatively bad thing -- Republicans had left themselves very little room to advance conservative health policy ideas.

The cornerstone of nearly every conservative health care reform plan is to eliminate or dramatically reduce the tax preference for employer-sponsored health insurance and use the revenues to help people pay for their own coverage. But the disruptions that would entail would dwarf the ones Obamacare is creating, and conservative wonks realized that by opportunistically attacking Obamacare, political operatives had just crafted the very attacks that could ultimately doom their own policymaking pursuits.

Writing at National Review late last year, Ramesh Ponnuru noted that in the wake of the cancelations row conservatives would have to move more gradually than they might ideally like.

"Some Republican health-care plans would run up against this same obstacle, because they, too, disrupt existing health-insurance arrangements," he wrote. "The answer to this problem, I think, is not to abandon the idea of moving in the direction of free-market health care as an alternative to Obamacare; it’s to make that move in steps. Step one would be flattening the tax break so it no longer rewards the purchase of the most comprehensive coverage available."

Easier said than done. Two weeks ago a trio of Republican senators introduced a plan to replace Obamacare. Conservatives everywhere, including Ponnuru and his National Review colleagues, applauded it. But its authors will seemingly have to choose between actually financing it or inviting the same severe market disruptions the GOP is now on record opposing. The plan itself called, somewhat confusingly, for "cap[ping] the tax exclusion for employee’s health coverage at 65 percent of an average plan’s costs.” Yuval Levin surmised reasonably that they meant capping it at the 65th percentile of employer plans. But either way its authors became caught in the trap their own party set for them in the fall. When questions started rolling in about market disruptions, they made a dramatic change to their white paper. The cap would now be set, vaguely, at "65 percent of the average market price for an expensive high-option plan," presumably at the expense of revenues required to finance the plan's coverage goals.

Then last week, conservatives boxed themselves in even further. They seized on a Congressional Budget Office report that concluded the Affordable Care Act will induce upwards of 2 million people to leave the workforce or reduce their hours -- in part by severing the link between employment and health care, and in part by subjecting lower-wage workers to substantial tax penalties as they rise from poverty wages through 400 percent of the federal poverty line, at which point the law stops subsidizing coverage. It's an inherent consequence of many means-tested benefit programs.

Conservatives were ecstatic. The misleading campaign ads -- Obamacare kills jobs! -- are already in production. The problem is that, due to design similarities, the Senate GOP health care plan would generate the exact same phenomena. And so Republicans will be under tremendous self-imposed pressure to maintain the link between employment and insurance and -- at the very least -- not to means-test the benefits of their eventual ACA alternative.

Ponnuru again: "the Coburn-Burr-Hatch bill also reduces tax benefits as incomes rise. But that’s not a necessary feature of conservative health plans…. Going forward, I hope the bill by Coburn et al is modified so it doesn’t… because there is some reason to think that these phaseouts can have pretty large effects on employment."

In Ponnuru's defense, he and Levin both argued for a flat benefit when the Senate GOP blueprint was first unveiled. But conservative health care guru Avik Roy forcefully endorsed the plan's means testing -- then turned around and decried Obamacare's work disincentives after the CBO report dropped.

Conservative health policy is thus being shaped less by principle than by the right's own anti-Obamacare opportunism. This is what happens when a political movement believes the chief duty of its policy entrepreneurs is to create the illusion that its party stands for more than just "no!" and tax cuts for the affluent.

But if avoiding easily spun CBO reports is their lodestar, Republicans have big problems on their hands, including the question of what they propose to do about Obamacare.

GOP leaders say House Republicans will likely pass an Obamacare replacement bill sometime this year. I assume this decision reflects polling data that shows full repeal is a political loser. But if they attempt to legislate, CBO will be unsparing. Between disruptions and labor supply effects, the Coburn-Burr-Hatch plan is out the window. If Republicans were hoping to use it as a basis for legislation, their own attacks on Obamacare have made that impossible. And if, like the Coburn-Burr-Hatch plan, the bill they advance is predicated upon full repeal of Obamacare, they're going to have a million other questions to answer -- about creating a massive market disruption, and killing the many jobs CBO says Obamacare will create in the near term, out of spite. (This wouldn't be a labor supply effect, under which people retire early because they now enjoy a health care guarantee. It will actually reduce hiring demand.)

There's an obvious path around this problem, and it's to not insist on repealing Obamacare. But conservatives won't stand for that. So Republicans will have to walk through fire for them.