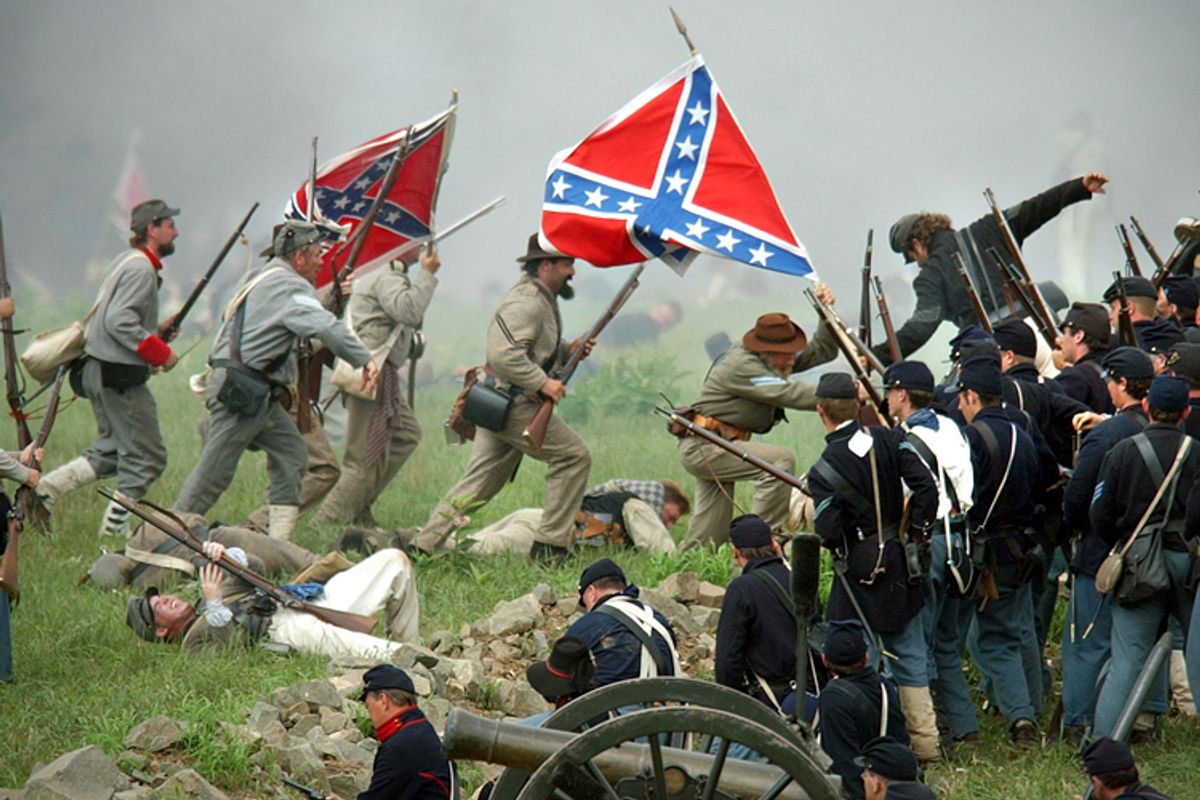 A re-enactment commemorating the Battle of Gettysburg, Aug. 10, 2003, in Gettysburg, Pa. (AP/Carolyn Kaster)
--

Starting tomorrow, Volkswagen workers in Tennessee will vote on becoming the company’s first unionized employees in the United States – a prospect Norquist-backed opponents are urging Chattanoogans to beat back in the style of the Confederate army. The election is a key test of the United Auto Workers’ efforts to organize foreign-owned, Southern-based auto plants, and its bid to marry traditional U.S. collective bargaining with a European-style “works council” so far unseen in the United States.

“I have no doubt we’re going to win the election,” VW employee Dave Gleeson told Salon. Gleeson, a VW team leader whose parents both retired from unionized jobs at General Motors, said he and his co-workers “make good money” but had been spurred to organize by issues with safety and newly unstable scheduling. “I can talk to the plant manager, the plant president,” said Glesson. “They can listen to you, but there’s no power behind it. You don’t have a say in how it goes.”

“We’ve said that when workers have a free, open choice, they’ll choose union representation every time,” UAW International president Bob King told Salon last week. “And I think VW Chattanooga will prove that.” That “open choice” refers to Volkswagen’s commitment, following calls from Chattanooga workers and their unionized counterparts in Germany, not to discourage unionization. In an emailed statement, Volkswagen CEO Frank Fischer said the company “is committed to neutrality and calls upon all third parties to honor the principle of neutrality.”

That’s a message in marked contrast to comments from Tennessee Gov. Bill Haslam, and junior U.S. Sen. Bob Corker. Sen. Corker told the Associated Press in September that a move “to invite the UAW in is almost beyond belief” and VW could become “a laughingstock in many ways if they inflict this wound.” Corker also told Nooga.com it was “sad to watch” the “environment the UAW has created” at a Tennessee GM plant. (In contrast, In These Times’ Mike Elk reported, Corker said that a visit to the same, already-unionized plant had been “uplifting.”)

Asked about criticism of such comments, Sen. Corker said in an statement e-mailed last week that in the pre-election period, “while the decision is in the hands of the employees, I do not think it is appropriate for me to make additional public comments.” But in a subsequent press advisory issued Monday, Corker accused the UAW of "misusing my comments to try to stifle others from weighing in on an issue that is so important to our community," and announced he would "ensure my position is clear" by holding a press conference this afternoon.

Meanwhile Gov. Haslam has maintained his anti-union line, telling the Tennessean that “there are some ramifications to the vote in terms of our ability to attract other suppliers,” and that he was expressing such concerns to VW management. Noting that VW was choosing between Chattanooga and Mexico for a planned expansion, Haslam told the paper, “My point would be that if UAW comes, we won’t be as effective in helping you built that supplier network.”

Right-wing groups including Grover Norquist’s Americans for Tax Reform are also working to defeat the union drive; billboards from ATR’s Center for Worker Freedom warn workers that “The UAW spends millions to elect liberal politicians, including BARACK OBAMA” and (quoting Reuters) that “almost every job lost at U.S. car factories in the last 30 years has occurred at a unionized company …” The Center for Worker Freedom is directed by Matt Patterson, the co-author of a May Op-Ed that described the UAW drive as “an invading union force from the North,” and said that “the people of Tennessee routed such a force in the Battle of Chickamauga,” when the Confederate Army stymied “an invading Union army” during the Civil War. “Let their descendants go now and do likewise,” he urged. (ATR did not respond to a Friday inquiry.)

UAW’s King condemned the role of such “outside special interests” as “really outrageous,” given their stated commitment to “free enterprise.” He added, “I can’t think of a better example of the definition of hypocrisy and duplicity.”

King credited the commitment to a neutral election to the leadership of VW worker-leaders, the “tremendous support” of VW’s European union IG Metal, and enlightened corporate leadership at VW “who really believes in representation.”

The UAW’s Chattanooga campaign is one of several – including efforts against Ikea, Wal-Mart and the Australian logistics giant Toll Group – in which union members abroad have pressured their employers to respect organizing efforts by non-union counterparts in the U.S. While the UAW had unsuccessfully sought an agreement from VW to recognize the union based on signatures from the majority of workers, rather than holding a Labor Board election, King downplayed the distinction, telling Salon that “if employers stay neutral, it doesn’t matter to us.”

VW and UAW leaders have both expressed interest in establishing a German-style “works council” in Chattanooga, an additional venue for input by elected employees into company decision-making, which King told Salon would represent “a step further” from the level of “co-determination” embodied in existing UAW contracts. (Under U.S. labor law, establishing a works council could be illegal in a non-union workplace.) “By working together,” King told Salon, “you’ll see all the metrics in Chattanooga improve,” and “there’s going to be a lot more ownership in the success of the company.”

What would that look like? Wolfgang Schaumberg, who served on a works council at a German GM plant, told Labor Notes’ Jane Slaughter that that body faced divisions between members who prioritized the perceived best interest of the company, and critics like himself who took up collective action against concessions to management. “It depends on their political position how works council members use their rights,” Schaumberg told Labor Notes. Asked whether VW employees should be concerned that a works council would end up making it easier for management to push through concessions, King told Salon, “Well, workers should always be concerned about the health of their company,” and that he’s often told UAW members that “nobody’s got more at stake in the long-term success of the company than our membership and white-collar workers who are on the shop floor.”

The need for auto companies to stay afloat has also featured prominently in the UAW’s defense of the establishment of a two-tier contract system -- under which new employees get paid around half as much as old-timers – in its now-embattled “Big Three” stronghold in Detroit. A UAW official there told the Detroit News in December that union leadership “hates two-tier,” but that “if we don’t organize” employees of foreign automakers like those in Chattanooga, “we’re never going to be able to totally eliminate the second tier.” (The two-tier system dates to 2007; the UAW accepted strike bans as well as other concessions at GM and Chrysler as part of the government-backed bailout in 2009.)

Asked whether UAW’s acceptance of two-tier contracts in Detroit hurt its appeal to potential members in Chattanooga, King told Salon that the union was against two-tier systems “philosophically and value-wise,” but “it’s something that we have done on a number of occasions when the health of the company and the viability and survival of the company is at stake. And then we always work to re-create the situation [where] you get equal pay for equal work.”

Asked whether VW should be paying its employees significantly better than it is now, King responded that he didn’t yet know what workers would identify as top priorities for bargaining. “We’ll come together with the company,” King pledged, “and figure out what’s fair compensation” that would “keep the company competitive and make the company successful.”

Citing the union’s supposed stubbornness in Detroit, anti-union VW employee Mike Burton told the New York Times’ Steven Greenhouse that the UAW “wouldn’t be the best partner for our company,” and that he had collected 600 names on an anti-union petition. King countered that he believed that figure included VW managers, and told Salon rank-and-file opposition to unionization had been “blown way out of proportion.”

The government-supervised election will last three days, concluding Friday. Despite VW’s neutrality pledge, Gleeson told Salon he’s heard reports from co-workers of managers urging workers to vote no. He said he’s been reminding his co-workers of issues they’ve tried to no avail to get management to address. “It would be better to have a voice,” he said, “than to just hope they do something about it.”