We all want recognition as human beings. The problem: Only one group can force its desires on the rest of us 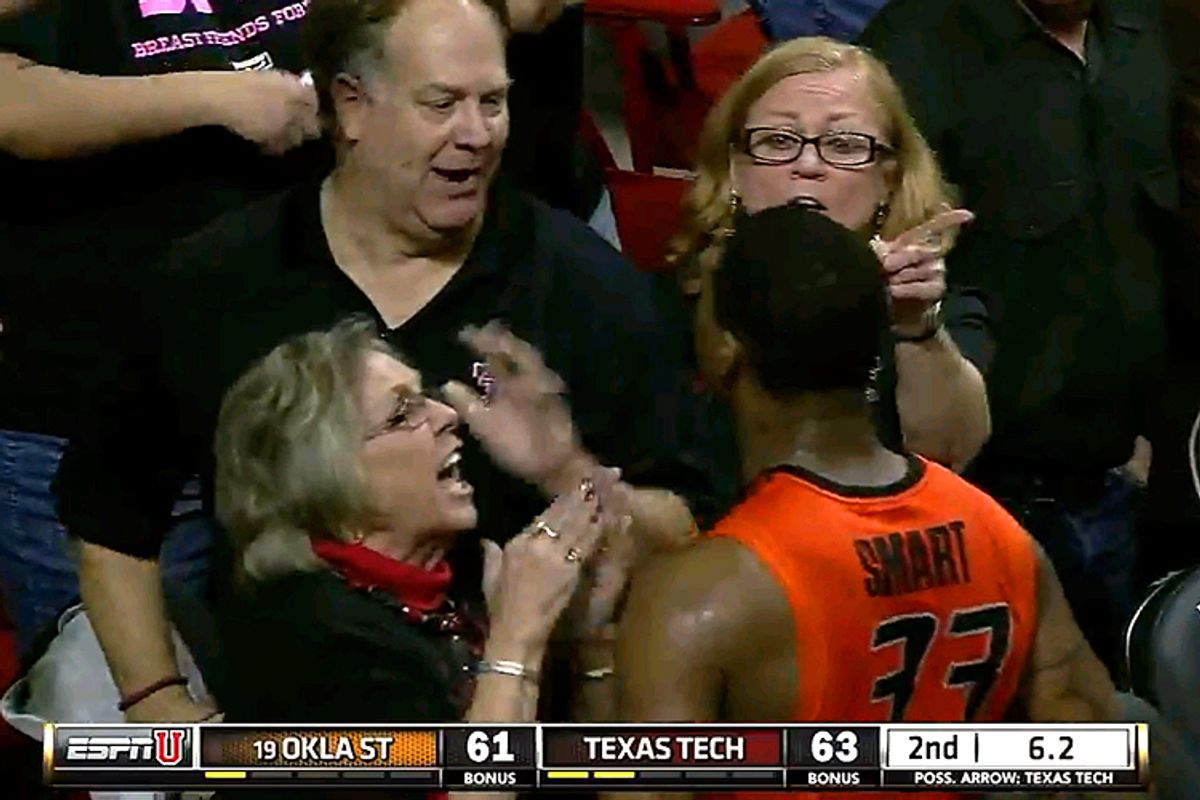 On Sunday, Marcus Smart, a sophomore basketball player at Oklahoma State University, apologized to Jeff Orr, a fan whom he shoved after Smart heard Orr call him the N-word. Orr has confirmed that he did indeed call Smart a “piece of crap,” but claims a slur was not used. Jeff Orr is a sorry human being, and he was not owed an apology. When you look at Smart’s visceral reaction courtside, at him yelling at Orr about being called the N-word as he was being pulled away by his teammates, it is clear that Smart believes he heard the N-word, and reacted accordingly.

Is it really a stretch to believe that a middle-aged white man who taunts a kid by calling him a piece of crap used the N-word? Not to me.

This is especially ironic given the reports that also surfaced this weekend about Italian soccer player Mario Balotelli, who was filmed in tears on his team’s bench, after Italian fans apparently taunted him with racial slurs during the entirety of his soccer match. Though reports have yet to confirm whether his tears were related to being subbed out of the game or the slurs, most fans who tweeted about the incident in the immediate aftermath connected his emotion to many slurs being hurled at him. Apparently, this is a regular occurrence.

What seems not so apparent to the folks who made Marcus Smart trot out and “take full responsibility for his actions” is something to which we should all take heed.

The fact that racism hurts is a truth about which many white folks remain purposefully oblivious and which many black folks would rather I not admit.  When I wrote last summer about crying after a white woman called me the N-word on a plane, many black people accused me of being weak and having poor self-esteem because I cared what she thought. But part of what it means to exist together as fellow citizens in a body politic is that at base level we recognize and honor each other’s humanity. We don’t have to like or agree with each other. But we recognize each other as levelly human. Despite the general effectiveness of our 40-plus-year “Say It Loud, Black and Proud” campaign, racism still clutches at our insides and twists us into nothingness at least for a moment. The sick and twisted thing about white supremacy is that it makes us care about what white folks think and say about us, even though we know better. A refusal to care can often cost us our lives. Ask Trayvon Martin. Ask Jordan Davis.

In this regard, then, I’m actually intrigued by Jeff Orr’s rush to apologize and to clarify that he didn’t use a slur to refer to Marcus Smart. White folks, too, want their humanity conceded, even after they have actively disrespected someone else. And a credible argument for racism is the one thing that has the potential to erode that. At base level they recognize that racism is dehumanizing, and that if they are racist they are human in all the worst ways. Unfortunately, this has not led to a change in behavior, so much as a stalwart campaign to get racist behaviors branded as anything but. Still, what should be clear to us is that we all desire recognition as human beings and not monsters.  The problem is that only one group has the power to force their desires on the rest of us.

Marcus Smart’s dignity was assaulted when Jeff Orr called him the N-word, and a “piece of crap.” Really, in this context, they are the same thing. A white man reducing a black man who is going about his work to mere waste performs the same kind of labor that the N-word does, whether it was used or not.

Smart reacted by grabbing Orr up by the collar. I can’t say I blame him. Yes, I believe in nonviolence as a way of life. But I also remember Malcolm X who said, “I’m non-violent with those who are non-violent with me.” If we lived in an America that cared about black people, or considering Balotelli, a world that cared about black folks, we would recognize that Smart didn’t make a mistake. Jeff Orr is the problem. Folks who think like him are a problem. In the face of blatant assaults on our humanity and personhood, black rage is not the problem.

Beyond Orr’s individual act of contrition, though, there is a whole sporting establishment implicated here. American athletics, in basketball and football, depend on young black men for their bread and butter. Yet, these organizations from the NCAA on up feel no responsibility to create contexts free from racial assault in which these players can play. Not only that, but they demand that black folks “grin and bear it,” when mistreated. White people are not without power in this situation. What might it have looked like for Marcus Smart’s coach to come out not only to testify about Smart being a stand-up guy but also to condemn the grown-ass man who viciously taunted him? That is what support for the players who make your job possible looks like. That is what it means for white folks to confront racism.

Marcus Smart is the same age as Trayvon Martin and Jordan Davis would have been if they had both reached their 19th birthdays this month. These young men, all born at the end of the 20th century, share at least one major sensibility in common. They did not automatically offer deference in the face of white audacity. They met disrespect with disrespect, which in my estimation is the supreme litmus test for whether America deserves its post-racial bona fides.

America keeps on failing. And this failure is a direct result of white folks’ fervent belief that their “shit don’t stink.”

In this self-delusional America, George Zimmerman actually almost became a contestant in a celebrity boxing match pitting him against rapper DMX. Thanks to tens of thousands of signatures on petitions late last week, the promoter for the event canceled it. What does it mean that America accepts and loves the spectacle of racialized violence when it is staged for their consumption and entertainment but refuses to concede that violence is a legitimate response to acts of racist humiliation and aggression?

George Zimmerman is a monster who murders children and terrorizes women. In America, if you’re white (even a white Latino as Zimmerman is) that apparently gets you celebrity status.

As for DMX, I get his thinking even if I don’t agree. Many black folks wanted this match to happen because they wanted to see Zimmerman get pounded. Maybe we could all feel vindicated if we could just see Zimmerman suffer some pain. But Zimmerman is nothing if not a masochist. He gets off on this shit. He needs black America to get down in the muck of self-degradation with him, so he can feel that his basic repulsion toward Trayvon Martin was founded on something real.

Ain’t nobody got time for that. Zimmerman will have to reckon with his choices at the hand of his Maker. And despite our great capacity for forgiveness and more than a few bouts at the lynching tree, it turns out that black people ain’t Jesus.

If we learned nothing else from Ralph Ellison’s "Invisible Man," we should know that black folks never win the Battle Royale.