Bruce Jenner treated as trans by tabloid press: What they're getting wrong 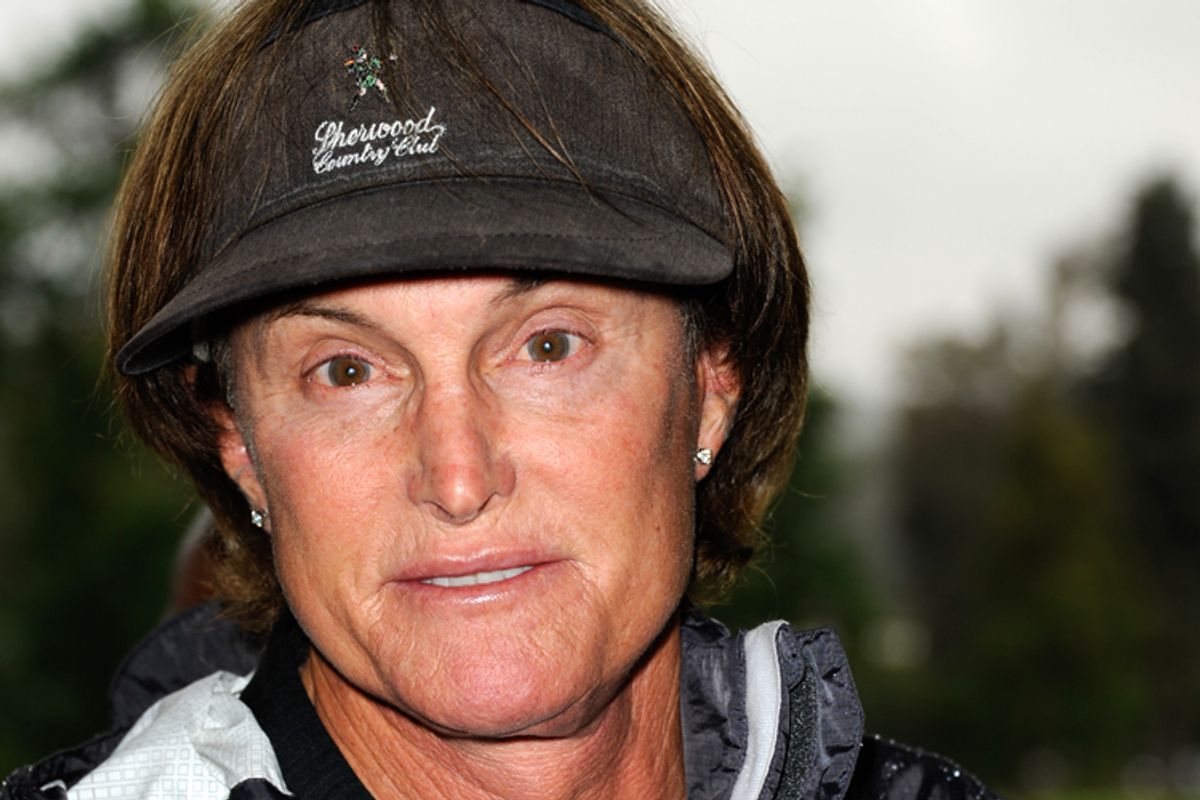 Bruce Jenner is perhaps the most talked about Olympian of the week in the tabloid press -- and he's far from Sochi.

The 1976 decathlon gold medalist and Wheaties-box icon has evolved into a media personality as the stepfather of Kim, Kourtney and Khloe Kardashian, and has lately been the subject of rumors about his appearance and perceived gender status. A daily newspaper wrote that "Rumors have been swirling that the reality star may be going through a sex change"; his reality-TV-personality sons, per unnamed sources speaking to a gossip blog, have been said to be "extremely supportive of the LGBT, and if their dad become part of that community, nothing will change." An online tabloid cited another unnamed source in saying that "as much as he wants to become a woman he will only do a select amount of things" out of respect to the Kardashian daughters and snidely added, "Good luck, Bruce, in whatever you decide!" Perez Hilton referred to the operation as a "TRANSformation."

Jenner admitted to having planned for an operation to smooth his Adam's apple, telling TMZ in 2013, "I just never liked my trachea." Photos indicate he's gone through with the surgery, as well as growing out his hair; he'd previously undergone the sort of plastic surgery that's undeniable. His visage on "Keeping Up With the Kardashians" has long been waxy and uncanny. He has described procedures he underwent in 1984, long after his red-hot Olympian fame had cooled a bit, as the result of low self-esteem, and has admitted to further procedures.

But does all this add up to what can only be described as a rush to judgment? Consider the milieu in which Jenner exists; at least two members of his immediate family, estranged wife Kris Jenner and stepdaughter Kim Kardashian, appear to have had extensive plastic surgery, and Kris Jenner has admitted to having had procedures on her appearance while Khloe Kardashian has said she will likely get plastic surgery "on my own terms." Body modification, for the Kardashian-Jenners, is just another option for self-improvement, much as most families might encourage one another to work out more. Jenner rose to prominence not merely on the basis of his astounding physical prowess but his cereal-box-ready youthful good looks. There are many possible reasons for a physical transformation aside from a desire to live one's life as a woman -- like the perceived preservation of a memory of youth.

This gets to the first of two problems with the tabloid coverage of Jenner's surgeries, which is the presumption that he is a trans woman. The second problem is the failure to work through what it actually might mean if he is. Articles about Jenner use masculine pronouns throughout and pruriently gawk at his body. What's the story here? If Jenner is trans, it's disrespectful to dig through the details of his transition; if he's not, these stories are conflating trans personhood with operations, implying that Jenner is becoming a woman because of his appearance and not because of his identity in the world. It's precisely the mistake Piers Morgan's team at CNN made when they imputed to Janet Mock maleness prior to her gender reassignment surgery. Trans people are not trans because they got injectables in their face or mildly altered physical characteristics associated with the presentation of biological sex. They're trans, as Americans learn more and more when activists like Mock and Laverne Cox speak out, because their gender identity doesn't necessarily match the body in which they were born. Being trans is not, as one tabloid site previously cited described it, a "decision." It's inherent.

We have much reason to believe Bruce Jenner feels uncomfortable in his skin, is socialized to view extensive and (to many) outré plastic surgery as a solution to that discomfort, and doesn't particularly care about presenting an image consistent with traditional notions of how a man should age or wear his hair. Until he tells the world that he is a woman, believing he's trans is the worst sort of conflation, associating the body with trans status when, as any trans person will say, trans people are trans long before any surgery. And if he really is (I have used, throughout, masculine pronouns, befitting the fact that if Jenner is trans, he's not out anyway), tabloids have encouraged their readers to cackle at every step of this person's journey.