GOP's demented 2015 threat: Why it could still hold the economy hostage

The debt limit was raised last night, but that doesn't mean the right's dream of confrontation is over. Here's why 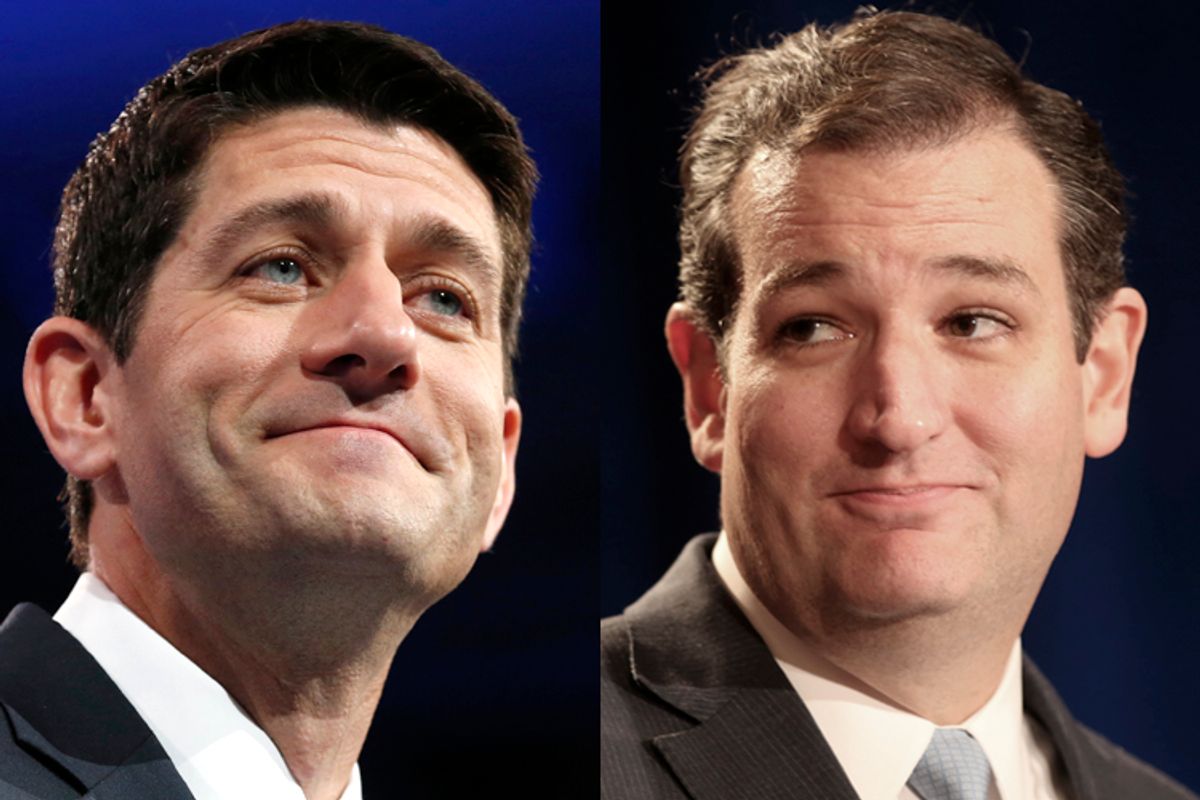 Yesterday marked a year and a week since President Obama signed the No Budget, No Pay Act of 2013, which short-circuited the first debt limit crisis of Obama's second term. It also marked the third time in Obama's second term that the House of Representatives, under GOP leadership, has passed legislation increasing the debt limit without extorting unreciprocated concessions from the president.

The fact that Tuesday's debt limit increase -- valid until March 15 of next year -- was appended to a random bill designating the air route traffic control center in Nashua, N.H., as the "Patricia Clark Boston Air Route Traffic Control Center" underscores how frivolous and contrived all of the legislative kabuki surrounding the debt limit has been, and at unknown cost to the economy.

Obviously the Senate still has to pass the plan in order to avoid calamity at the end of the months, and thanks to filibuster rules at least five Republicans will have to martyr themselves for that to happen.

But the past year has revealed two irreducible facts about the GOP and its weaponization of the debt limit. First, that Republican leaders have no intention of allowing the U.S. government to default on its obligations to creditors; and second, that Republicans' oft-repeated claims that clean debt limit increases can't pass the House have always been false -- bluster meant to intimidate Democrats into conceding something, anything, for a debt limit increase and keeping the cycle of brinkmanship alive.

What has truly upset the cycle is that Republicans have finally learned -- after a couple of failed extortion attempts -- that President Obama and Democrats are serious about de-weaponizing the debt limit. They will not be scared into negotiations. Once that became clear the two above facts have augured for clean debt limit increases, which is what we've gotten ever since. It's practically a logical certainty.

Part of that's just a concession to political realities on the right. By weaponizing the debt limit and creating an expectation of routine hostage taking, Republicans have made it very difficult for themselves to explain to their own primary voters why they've started increasing it routinely again, as if Obama were George W. Bush or something.

So a year's probably the most we can hope for. But it's just as easy to see this as a hiatus -- a temporary accession to political reality paired with a hope that in March of next year the balance of power will have shifted enough to knock Obama back into negotiations.

If that's the case, the spring of 2015 will be a fraught with danger. Particularly if Republicans flip the Senate.

Unlike the so-called Boehner rule, which has somewhat nebulously and malleably circumscribed the GOP's ransom demands, Obama's post-2011 refusal to surrender any concessions for a debt limit increase is both consistent and unarbitrary. His position won't change no matter how well or poorly Republicans perform in November because no election outcome short of veto-proof congressional majorities neutralizes the executive branch's role in the lawmaking process. No plausible outcome in November will make it legitimate for the GOP to extort its entire agenda on the threat of tanking the global economy. That is a cardinal fact.

Hopefully a Republican Party in full control of the Congress would recognize that, recognize that their party will be fully held to account for the consequences of a debt limit breach, and increase it without drama. Ironically the one upside to full GOP control is that they wouldn't be able to shirk responsibility for various crises on to Senate Democrats anymore.

But a GOP sweep in 2014 would also restimulate the right's appetite for confrontation. It wouldn't really matter how contrived or unfeasible their demands were -- they would expect Republicans in Congress to produce. The tension between factions on the right would be much greater than it is right now or at any time last year. And that would create an environment of uncertainty rivaling the summer of 2011.