In an era when real-life police look ever more like RoboCop, this sleek, dull remake is a missed opportunity 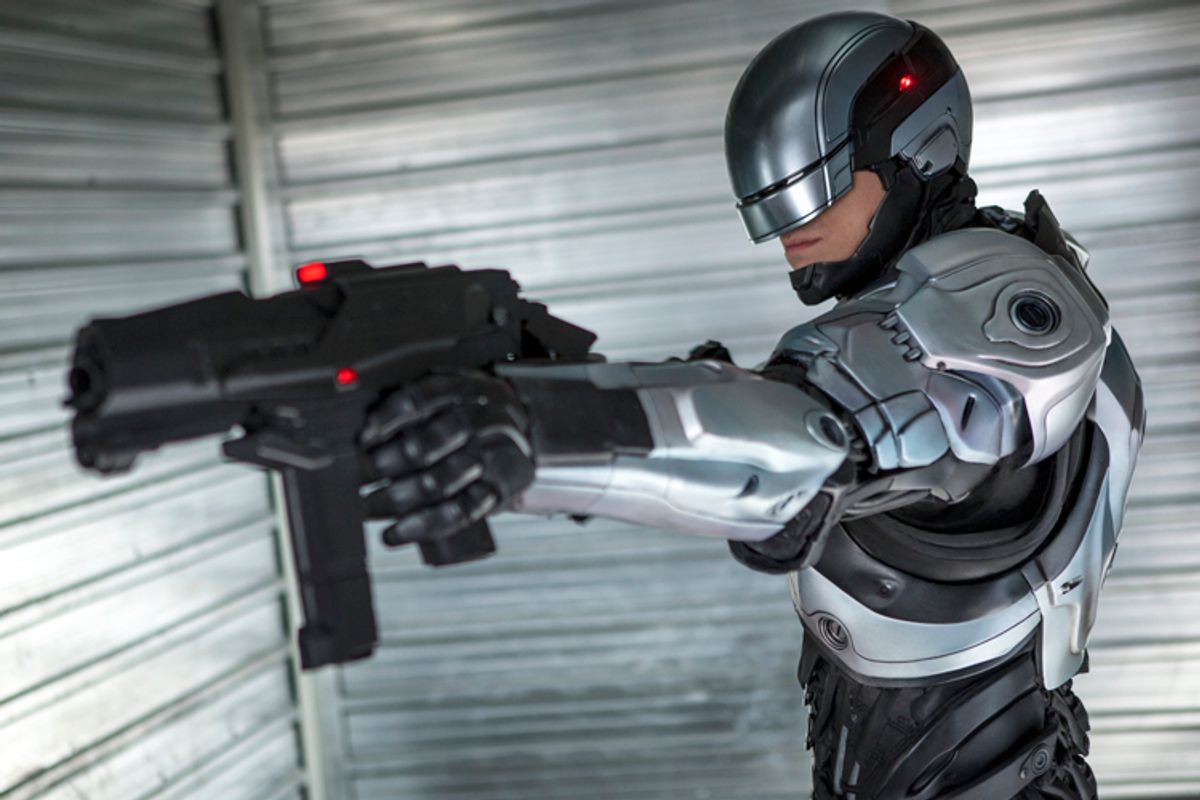 It’s ‘80s weekend in America’s multiplexes, and while I guess that’s always true, people of my approximate generation may well wonder whether they’ve tumbled into the hot-tub time machine. In addition to the confusing, push-me-pull-you spectacle that is the “RoboCop” remake, this week also brings us a new version of “Endless Love” (not technically a remake of the Brooke Shields film) and a new version of “About Last Night,” which is a remake (with an all-black cast) of the 1986 Rob Lowe-Demi Moore movie, itself adapted from David Mamet’s play “Sexual Perversity in Chicago.” Where is Marty McFly in all this?

I hear “About Last Night,” which was written by the hilarious Leslye Headland, is pretty good, but that’s just me trying to change the subject. As for “RoboCop,” well, jeez. Let’s put it this way: What did you think would happen when a Hollywood studio decided to remake Paul Verhoeven’s acrid, ultraviolent social satire of the Reagan years, a movie that shaped both an era and a sensibility? There’s no re-creating that moment or its impact, not when we’re barraged with so many semi-ironic visions of the dystopian future that their power has leached away into the soil. What we’re left with is a teen-oriented action flick with an A-minus cast, a mixture of “Transformers”-style robot battles and cops-and-robbers showdown that never feels all that exciting or cutting-edge, bracketed by some intriguing and half-successful moments of social commentary.

There are some interesting things about “RoboCop,” and — no, wait, that’s a lie. Let’s say there are some interesting things about its creation, about the fact that it exists and the form it takes, along with a few sporadic stirrings of life within the movie itself. You can sense that the producers tried to replicate the chemistry of the original: They imported Brazilian director José Padilha, of the award-winning (and splatterific) “Elite Squad” movies, a left-wing intellectual with an appetite for violence who makes a reasonable candidate to fill the Verhoeven dissident-prankster role in Hollywood. They elevated a good-looking semi-unknown to play the title role, in this case Swedish actor Joel Kinnaman, star of the international hit “Easy Money” (aka “Snabba Cash”) and the AMC series "The Killing." They gave full credit to the original 1987 script by Edward Neumeier and Michael Miner, adapted here by newcomer Joshua Zetumer.

And the results are, well, definitely not the worst science-fiction movie ever, though I fear it’s true (as Forbes columnist Scott Mendelson has suggested) that not just the original movie but its two non-Verhoeven sequels are better, funnier and more trenchant than this remake. By far the most startling scene in this “RoboCop,” and almost the only one where I feel Padilha putting his own stamp on the material rather than submitting to it, comes right at the beginning: “We” have conquered Iran, sometime around 2028, with an entirely automated force of robot warriors and no loss of life. A burbling TV reporter on the streets of Tehran celebrates the Iranian people’s total submission to their new machine overlords, at least until she’s interrupted by a suicide-bomber counterattack, staged while the whole world is watching. Just as one of the American robots is about to slaughter an 11-year-old kid holding a kitchen knife, the Pentagon cuts the feed, throwing it back to the oleaginous right-wing studio host, played by Samuel L. Jackson with an American flag pin and a dubious permanent-wave wig.

So Padilha manages to reference the Obama-era drone war, the Cheney-Wolfowitz fantasies about the liberation of Iraq, and the toadying, propagandistic mass media within about five minutes — and then nothing else in the rest of the movie comes close to that. Yes, the maimed body of Detroit police officer Alex Murphy (Kinnaman), left for dead after a car bombing in his own driveway, becomes the intersection of political corruption and corporate power, but not in any surprising or unfamiliar way. As in the original, Alex was blown up by an alliance of evil mobsters and dirty cops, and then becomes the subject of a scientific, technological and political experiment. Given the extent to which big-city police departments have indeed become paramilitary robot-cop squads in our century, this recycled script feels obtuse and almost antique, as if it’s willfully blocking out real-world parallels.

Kinnaman, who’s so suave and charismatic in the “Easy Money” films, really doesn’t make a strong impression here, either because he’s playing a stoical Yank cop who gets robotized or because Zetumer’s screenplay gives him nothing interesting to do. Gary Oldman lends a note of humanity to the conflicted scientist who encases Murphy’s gruesomely stitched-together remnants in a robot exoskeleton, but the only truly enjoyable roles are the nefarious ones: Michael Keaton as the unctuous zillionaire masterminding Alex’s reappearance as a new-product launch, Jay Baruchel as a weaselly, bearded marketing whiz and Jennifer Ehle (long a stealer of movies) as a hard-boiled corporate enforcer.

I admire Padilha’s Brazilian films (especially the documentaries “Bus 174” and “Secrets of the Tribe”) and I wish I could say that he takes naturally to the weird and artificial environment of big-budget Hollywood filmmaking, the way Verhoeven once did. The movie has a handsome, sleek veneer (shot on digital video by Lula Carvalho, Padilha’s frequent collaborator), and features some excellent special effects, notably the grotesque rendering of Murphy, post-bombing, as little more than a brain, a heart and a pair of lungs, the bare minimum of human hardware. But it may be that the cracks in the system exploited by Verhoeven don’t exist anymore, and the perversity and ambiguity of his work has specifically been suppressed. In this “RoboCop” it feels like the director, the studio and the so-called message all fought each other to a robot-war stalemate, ending in a series of dull and incomprehensible action sequences and a transparent plea to the audience to come back for more.