White lost out, Iouri Podladtchikov's signature move earned him gold, and Bob Costas bowed out due to pinkeye 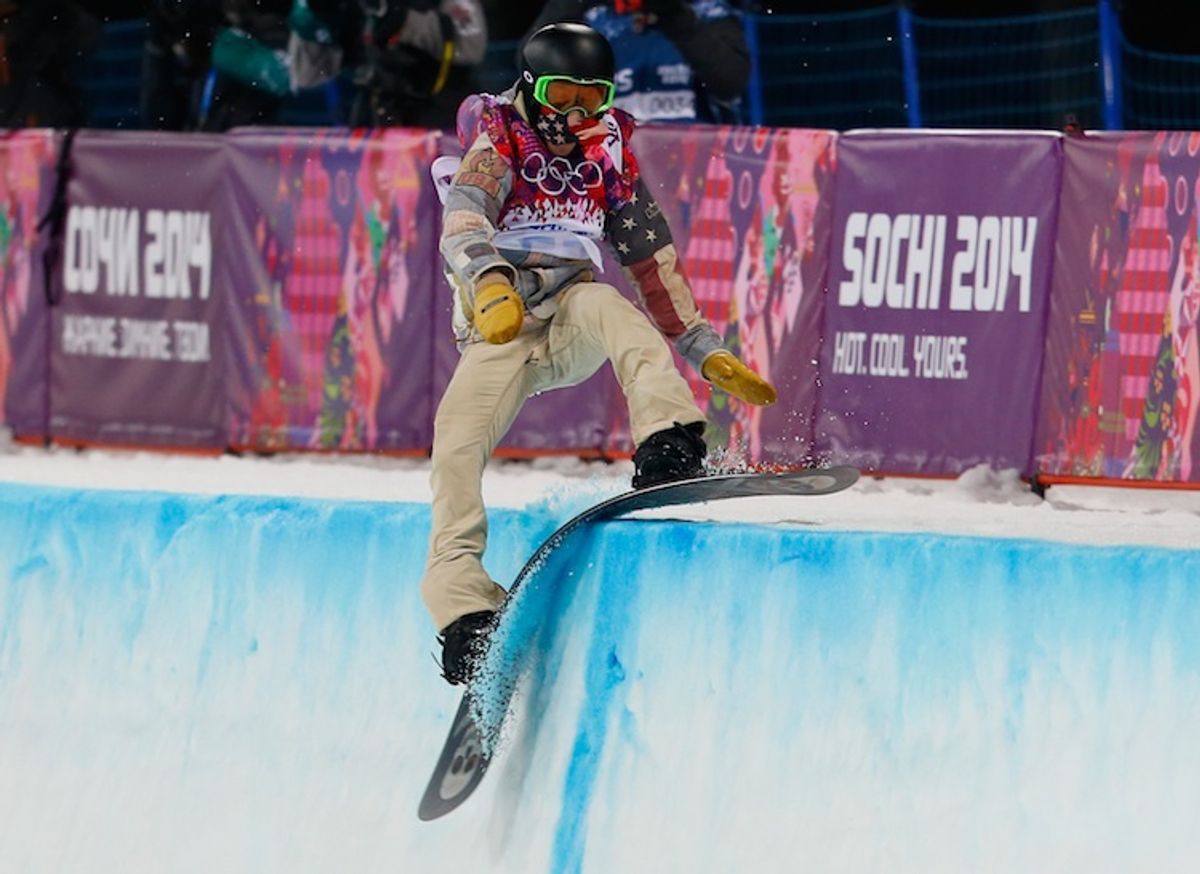 On Tuesday, for the first night since the Sochi games began and for the first night in 157 Olympic prime-time broadcasts, audiences had to navigate NBC’s coverage without Bob Costas. Due to the infection that staged a coup on both of Costas’ eyes and much of social media, Matt Lauer was called in to handle ice-diamond desk duties so Costas could have a night to rest.

It was understandable that Costas needed an evening off, but his absence left an obvious hole in the proceedings. In addition to being a reliable Olympic presence in general, both Costas and his case of pinkeye had become central characters in the Sochi narrative. His red laserbeam gaze, his twin eyes of Sauron, had served as our guiding lights through all those qualifying rounds of mogul skiing and slopestyle. Truly, those bloodshot peepers were the Sochi Olympics equivalent of the glowing green light at the end of Daisy’s pier in "The Great Gatsby," a beacon reminding us what’s important: that you should always, always wash your hands during cold and flu season, especially if you place them anywhere near your pupils.

Lauer did a decent job of playing substitute. He had clear eyes. He had a full heart. But somehow, I still couldn’t love Lauer. At times like these -- when a sportscaster must sit at Snow Miser Mission Control and occasionally interject comments into coverage whose results were revealed half a day earlier -- we need Costas, dammit. So get better, Bob. We want you on that ice-diamond. We need you on that ice-diamond.

Aside from the Costas mini-tragedy, there were other dramatic moments in Tuesday’s prime-time Olympic show. We got to watch as Erin Hamlin became the first American to medal in luge (she slid her way to bronze), and also as Kate Hansen became the first U.S. luger to get famous for shimmying to Beyoncé. (Hansen didn’t medal in her event, but in warmup dance moves, obviously she was pure gold.) Early in the broadcast, NBC also showed American Devin Logan clinching silver in women’s slopestyle skiing while Canadian Dara Howell took gold. But the big stories of the night came down to two things: Shaun White and pairs figure skating.

It was next to impossible to turn on the TV last night without knowing -- by intention or unfortunate Twitter accident -- that White failed to medal in the halfpipe, an event in which he had won gold two times prior. The suspense of the telecast, then, came from seeing exactly how he had botched his chance. At first, given the amazing heights he achieved in the run that got him into the finals, he didn’t seem to be botching anything. It almost made you wonder whether all the spoilery reports about his inability to medal were just an elaborate prank concocted by George Clooney during some “Monuments Men” promotional downtime.

But once the finals got underway and White stumbled twice on his first run, it was obvious that both the pressure of the situation and the bumpiness of Sochi’s halfpipe terrain were going to keep White from the medal stand. He wound up in fourth place, just a sneeze away from more hardware. But don’t feel too badly for the guy: he still has two gold medals, he handled the disappointment with exceptional grace and, as described in this touching piece by the Washington Post’s Mike Wise, he still had his priorities straight when the whole thing was over.

Now, all that being said: If he had to miss out on his third gold, did it really have to happen against a snowboarder whose nickname is the “I-Pod” and whose signature move is called the YOLO flip? Aren’t there Olympic rules that specifically disqualify any athlete who uses the term YOLO in a competitive context? If there aren’t: SHOULDN’T THERE BE?

Let’s move on to figure skating, or as I like to call last night’s pairs competition, Dèjá Vu on Ice. Because of the team competition, we had seen several of these programs in recent days, including the one performed by Canada’s Meagan Duhamel and Eric Radford -- which was still lovely, but not as solid as it looked the first time -- and the phenomenal routine by Russian duo Tatiana Volosozhar and Maxim Trankov, who oozed “Yeah, we got this” from every pore.

Really, though, the most notable participants in Tuesday’s short-program show were the Germans, Aliona Savchenko and Robin Szolkowy. Together, they delivered a fine routine to the theme from “The Pink Panther,” in outfits best described as disco military (his) and hot pink nightmare (hers). Looking at Savchenko’s skin-tight, blindingly bright pantsuit was like staring directly into a My Little Pony-tinted sunbeam. It was what cotton candy would look like if you covered it in a bubble gum glaze, shoved a fluorescent light bulb into it, then plugged it into an electrical socket. At this stage in the competition, the Germans sit in second place. But if Savchenko keeps wearing that costume, she may successfully blind all her rivals, giving her and Szolkowy a real shot at gold.

Honestly, that costume … it was … it was the color of a scorching, neon case of pink eye that stubbornly refuses to fade in the face of cold compresses and antibiotics.