When my daughter was diagnosed

I was shaken to find Laura had Down syndrome. But the real problem was my limited vision of what happiness could be 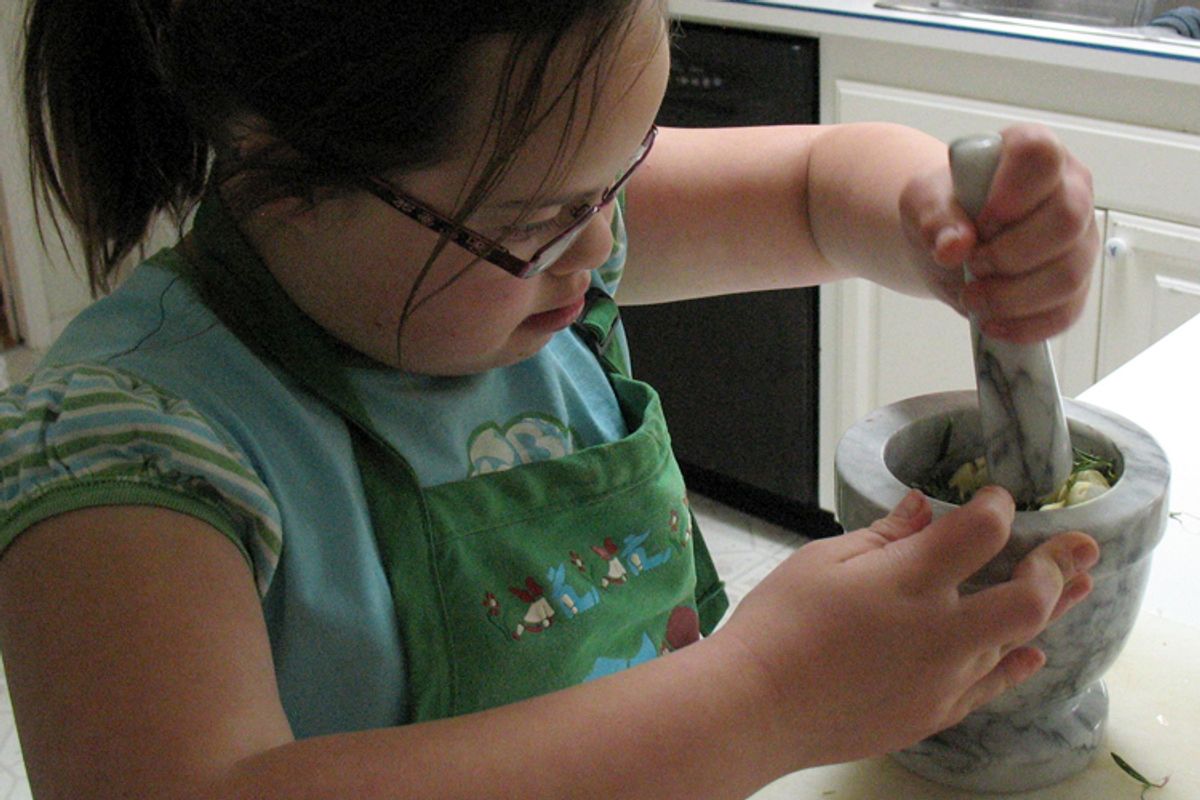 A photo of the author's daughter Laura
--

In late March of 2001, a month after my daughter Laura had been diagnosed  with Down syndrome, I drove out to the Oregon desert. Theresa, my wife, had taken Laura and her 5-year-old sister, Ellie, back East, to visit family; I wanted some distance, a change of landscape. A broader perspective, or at least a new one.

I was with a friend I’ll call Robert, the first person I told about Laura. In the few weeks since, he'd been listening more than talking; when he spoke, he was measured, considerate. He had distance without being distant. For me and Theresa, mired in pure, unassimilable fact, his presence was as consoling as any empathic shock.

We loaded up tents, packs, ramen noodles and candy bars. Then we shooed the two dogs into the back of the Subaru: his dog, an expressive, jowly English pointer, and Penny, our anxious, submissive, cinnamon-colored mutt, fattened by years of food falling from high chairs. They scrabbled and slobbered and whined. We set out, calling back to them to calm down.

It felt good to be driving east, toward the usual limits of vision. We live in the Willamette Valley, a wide north-south swath of agricultural grass fields, bounded to the west by the low, softened mountains of the Coast Range, and to the east by the intermittent snowy peaks of the Cascades: Mount Jefferson, Three-Fingered Jack, the Three Sisters, widely spaced as punctuation for an unseen sentence. As you descend from the pass, the Douglas firs recede, replaced by Ponderosa pines, then juniper, then sage; the ground, once loamy, is cindery and dry; the air smells different, rarefied, sharper. Soon it's all fence wire, sky and the scoured forms of hills, their cinnamons and russets knotted by sagebrush, like the back of a rug.

As the landscape emptied out, I began talking about Laura, venting, the words spilling over. I didn’t know how to think about her. I remember saying I wanted her to be Laura, my daughter, not a medical case, not an extra chromosome. I could already hear the iron doors of categories clanging shut, special needs, disabled, developmentally delayed. I didn't want her to be the sum of her medical problems. I wanted some sliver of her life left pure. Robert mostly listened and kept his counsel. I do remember his saying that Down syndrome seemed to him part of the normal range of human variation, and that, as such, Laura might be unique and valuable not in spite of her Down syndrome, but because of it.

We arrived late, switchbacking up to the plateau where the campground was, and set up tents in the shadow of rounded hills, hurrying to feed the dogs and ourselves before dark. In the evening, we walked up the dirt road from the campsite. The dogs bounded ahead, researching invisible trails.

You could still see some orange in the west; a few bright clouds were ashing over. Then the first star was out, and the sky was all gradations of blue. But one cloud stayed, pink as the inside of a grapefruit. It was different. The other clouds were, definably, volumes, objects in the sky. A child could look up and say Car, or Horse. But this one had no shape you could name by likeness. It was a blur, a region of unfocus, a mist. It was, we thought, simply higher than the other clouds, thinnest cirrus gathering the last of a sun we had already turned away from. But as the sky darkened, the cloud's colors grew deeper, more saturated. It seemed lit from within. We could see the light moving, rippling with soft verticals, like folds in a heavy curtain. A dark coruscation, a pulse.

It was clear that we were looking, somehow, at the aurora borealis: a rare event at this latitude, but evidently there. The cloud was not a cloud. It had been right in front of us all along, but expectation had kept us from seeing it at first.

That was 12 years ago. The dogs died. The Subaru gave out and was hauled away to auction. Laura’s in seventh grade, Ellie her senior year of high school. I wrote my way from then to now, drafting and revising the story as it unfolded, which is what I was beginning to do as Robert and I drove across the desert and I wondered what it meant to have a daughter with a disability. I know now that there is no final answer, that it is up to me and Theresa, and not only to us: to Ellie, to the world around us, to Laura herself. This is the long view Robert took, or what I took from what he said: that the extra chromosome did not have a definite meaning — tragic or otherwise — to grasp, but that it would take its meaning from what others thought and did.

Looking back, I wish, a little bit, that I could have had more of this understanding then. That I could donate what wisdom I have to my younger self, like a kidney. But it is more like a face, something indistinguishable from identity and time. An understanding not only grasped, but earned.

Everything I said to Robert, as we drove across the desert, was fueled by an inner argument:  I believed that an ordinary happiness was possible; I believed it had been denied. But what counts as ordinary? What seemed a cloud became the Northern lights — extraordinary for me, ordinary somewhere else. It was a glimpse of life at another latitude, of an unfamiliar sky. I know now that the terms of my wishing were mistaken. Ordinary life had not been lost; it was always a mirage, like the idea of a normal child.

George Estreich's memoir, "The Shape of the Eye," won the 2012 Oregon Book Award for Creative Nonfiction. He lives in Oregon with his family.