From celebrities to right-wing columnists, when it comes to sexual assault the media's idea of "balance" is inane 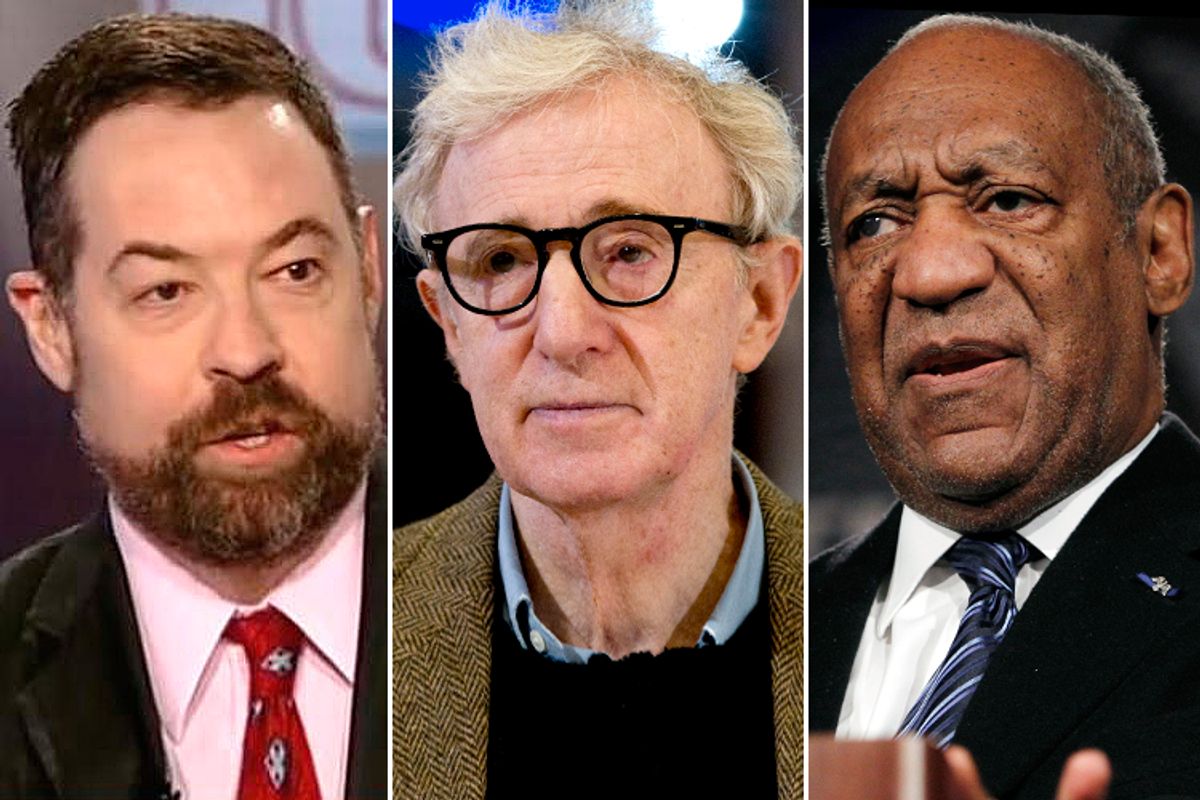 Taranto, a caveman misogynist and serial rape apologist so skeptical of the existence of sexual assault that he has put the words in quotes, applauded a New York Times writer who, "Unlike many journalists ... acknowledges the problem of wrongful accusation" in a piece about sexual assault on college campuses.

This is what balance looks like in rape culture. Which is why balance is bullshit.

In some ways, it's actually kind of unfortunate that the disparities in how we talk about sexual assault are not always as glaring as Taranto's smug misogyny. It's easy enough to dismiss Taranto, since most people can probably agree that he should be put into a garbage can and ignored. Far more often, we are faced with the silences that populate these conversations, the reporter who writes "sex" instead of "rape" when covering an assault, the assumptions we carry about victims without realizing it. That these imbalances are quiet and harder to root out is a point New Inquiry writer Aaron Bady made when he addressed our deference to an abuser's "good name" and the presumption of guilt -- often of outright malice -- we impose on victims who speak out.

It's been two weeks since Dylan Farrow published her open letter detailing the alleged sexual abuse she experienced at the hands of Woody Allen. Since then, she has addressed the abuse in interviews with People magazine and the Hollywood Reporter. It's been 20 years since Allen held a press conference on the steps of Yale University to announce the findings of the Yale-New Haven Sexual Abuse Clinic's (incredibly fraught) investigation into Farrow's allegations. Since then, he hasn't much addressed the issue, but really, he doesn't need to. He is a critically celebrated writer and director in a culture convinced of its own righteousness, confident that it would never grant such distinctions to a sexual predator.

Despite enjoying two decades of the presumption of innocence (and a massive accumulation of wealth), Allen was given column inches on the New York Times editorial page to assert his innocence (and impugn Farrow's mental health and character) -- in the name of "balance."

Bill Cosby signed a deal earlier this month to return to NBC with a family sitcom; the network is hoping to bank on Cosby's status as a beloved cultural figure to revive its nighttime lineup. The former Cliff Huxtable has been celebrated as a wholesome comedy icon, but he has also been accused -- repeatedly, and in explicit detail -- of drugging and sexually assaulting multiple women who trusted him as a mentor. The women who have come forward with these allegations, like Farrow and millions of other survivors, don't have much of a platform from which to be heard. They are just names in a court case against another good man and his good name.

As women like Barbara Bowman continue to speak out about the Cosby case, we will be urged -- now as ever -- to be balanced in our judgments about his innocence or guilt. And we will be reminded -- now as ever -- that there are no charges, and certainly no convictions, to hang our conclusions on. That it is, in fact, dangerous to jump to conclusions in such ambiguous cases.

We don't have charges or convictions, but we do have a cultural context that must inform how we should hear these stories. Listening to victims when they come forward and taking their allegations seriously isn't calling for an angry mob to storm the gates of NBC -- it's a necessary corrective. A nod toward balance.

While we may never "know" what happened between Cosby and the women who say he abused them, we do know quite a lot about sexual assault in this country.

The overwhelming majority of women and men who come forward about their abuse are repeatedly victimized -- first at the time of the assault and then by a culture that doesn't believe them and a criminal justice system that fails them.

Our systems of accountability are broken, or never worked in the first place. If we are going to place our full faith in the criminal justice system (an approach that has been thoughtfully critiqued by feminists like Andrea Smith for its reliance on mass incarceration as a solution to rampant violence against women), then we have to understand the data on how terribly that system fails victims. How it fails to reform offenders. We have to acknowledge that police departments are often hostile to survivors, or poorly equipped to properly investigate assault cases. That military commanders exercise "random and inconsistent judgment" when handling allegations of sexual abuse, when such incidents are acknowledged at all. That university officials can be more interested in making abuse allegations go away than holding perpetrators accountable. That our culture teaches us that victims of sexual abuse are complicit in the violence committed against them.

If men like Taranto want balance, then let's include this information as a footnote in every piece of reporting on sexual assault. If he wants to talk about false accusations, then the next sentence must reflect that you are more likely to be hit by an asteroid than be maliciously accused of a rape you did not commit.

Let's fill these pieces with asterisks to indicate the gross disparities in how we address sexual violence in the United States; then maybe we can talk about balance.

Correction: An earlier version of this piece misstated the incidence of sexual assault. According to data from the Centers for Disease Control and Prevention, 1 in 5 women and 1 and 71 men will be victims of rape in their lifetimes. The numbers are higher for sexual victimization other than rape, including sexual coercion and unwanted sexual contact; 1 in 2 women and 1 in 5 men will experience sexual victimization in their lifetimes.