How my husband forgot sex

When we were younger, he was the one who taught me to explore. Then he had cancer surgery -- and came out a virgin 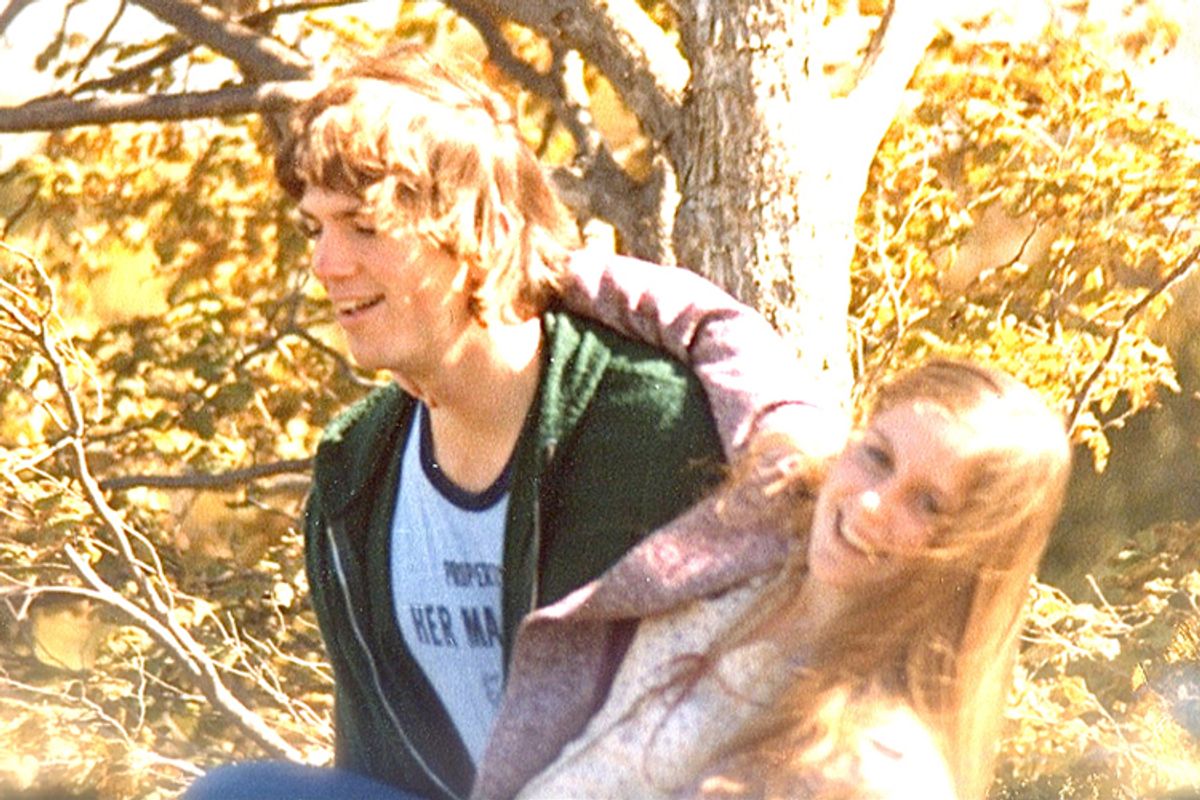 A photo of the author and her husband
--

In the 23rd year of our marriage, my husband went into surgery for a rare cancer, and came out a virgin. At first, I wouldn’t know that in the 10-hour ordeal we termed a “slash-and-burn” — a near-disembowelment and bath of hot poison medically referred to as hyperthermic intraperitoneal chemotherapy (HIPEC) — he’d forgotten his life. But in the weeks that followed, we would learn that internal bleeding caused a lack of oxygen to his brain, and the resulting traumatic brain injury destroyed his desire to communicate, and completely altered his personality. Gone was any ability to speak, emote, remember. Lost to him were his past, his passion and his occupation. I didn’t know when his sexual capacity would return, if ever. Who he was, isn’t.

We were mature, in our 40s. We’d been making love for decades, since we were teenagers. We had throw-you-on-the-bed-and-multiple-orgasm-your-heart-out mature sex. Going into an extensive and unpredictable HIPEC surgery for pseudomyxoma peritonei, we’d already decided what would happen if we couldn’t have sex again. If we can’t use makeup sex to resolve disputes, we’ll communicate more, we think. If he’s impotent, we’ll take up running. In any of our ridiculously positive scenarios about cancer, we never could have prepared for what happened. Weeks after we return home, after he’s begun speech therapy for aphasia, after an MRI of his brain, after months of waiting to see a neuropsychologist, we learn that his pleasure has not been removed, but something else is missing.

On this day, he sleeps, naked. His hands are by his side, his body flat over a comforter embroidered with flowers. His purple scar is a brilliant vine up his middle, its skin tender and new. I dry my wet hair with a towel, and watch him breathe, staring at his legs. His legs are an epic, a beatbox, a bel canto, a tango, a fresco, a gastronome. Neoclassical. They are a balm to me, even though his masculine assertion has vanished, his legs are evidence of the athlete and lover he was. In the silence, his organs rumble with the soft food and vitamins and medicinal teas that I have plied him with, to help him gain weight. The hair they shaved from his pelvis is starting to grow back. I want to run my palms over it, but I’m frightened I’ll hurt him. Instead, I stand beside the bed, and watch his sliced be...

In this strange place where we have come to recover, the November wind moves across the chaparral and sagebrush and goldenrod of the San Joaquin hills and down to the Laguna canyon, where it winds through the screen window carrying sand, and the sense of erosion. The wind lifts tufts of my husband’s hair where it’s graying: across his chest, the sideburns of his side-parted, freshly washed mane. His eyes open. They are indigo, wide and unblinking. His eyes disguise no thought; they alight as if to legitimize my belief in innocence.

I lean over to kiss him. When he looks down, I follow his gaze, see the flesh-familiar shape rise. I smile, catholic and evil, giggly and silly. No doctor knew if his sexual functioning would return. It’s been two months since the surgery, and I wasn’t sure if I’d ever be with him as a lover again. My hands go to my satin slip, and I feel my thighs under my palms, resilient haunches, ones of a woman, not a girl. I don’t even think, I just act, the hours and days and months of quiet having made me more instinctual. He watches as I climb on top of him.

He is silent. He is not without words, I think. Since the surgery, I have imagined his words are locked inside, where they are waiting to be discovered. And I will. I will search for my relationship’s former identity, my marriage’s fixed history, my lover’s unaltered state. Because I haven’t surrendered yet. I still think that I want to find my way back to who the two of us were before. The only thing unchanged is the way he feels upon my skin. I’ve got to have some reassurance that the “we” that I knew was not dead. His body can give that to me. Even though he’s fragile, I’m willing to use his body for a stability I can’t always provide for myself.

Everything slows. I lower myself and I watch his already enormous eyes enlarge, rapt, his posture slouch in easy receptivity, the last surreptitious instinct having been drained from him in surgery: He is defenseless. This is strange, this is beautiful, this is precious. We’ve never been here before, and I don’t know why I know this.

His eyes are never for a second removed from my eyes. He doesn’t turn away from my face and so I do not turn away from him. We do not close our eyes. I watch and watch and watch. Which means I must really see him. There before me is a face completely unaware of its pleasure, the simple stare of a man who senses all and relates to nothing. I lean back, balancing my body on his legs, keeping my hands away from his scar, suddenly frightened that I might tear him apart. A few seconds later, he comes to orgasm, and it surprises us both — the fast, sharp impulse, the release that he doesn’t seem to recognize.

I watch him closely then, both of us silent, his face remarkably unlike the man I have known, guardedness replaced with the purity of open regard. I move away, and lean against the pillow, watching his expression. Across his face, none of his former gestures. He hadn’t known what I was going to do, what my touch was going to be like. That orgasm came as directly and forcefully as a teenage boy’s.

He nods, eyes sleepy, still taking in every inflection of my demeanor.

“Do you remember sex?” I ask, my voice a whisper.

“I don’t think so,” he says, and then he watches my eyes for reaction. He says this without shame, without guilt, without remembering. I look at his face for a few moments, and then I look away, toward the crimson-painted wall where there is a dark column of ants weaving in an unbroken line toward the ceiling. I raise my finger and I smash the ants. The ants reform the line as if I was never there, destroying their lives.

His hand reaches out, enfolds my hip. It’s the first time he has moved toward me since the surgery. I do not cry, though I wish I could. In my mind, I add sex to the list of things forgotten. Things like the day we met, the day we married, the days our children were born. I think about the ways I have made myself a “we” — who we are, and what we like and what we don’t like, what we do and what we will never do — and I watch those things vanish, too. After a while, I watch him sleep. The man who taught me to explore has become as unknowing as a stranger in a strange land.

At first I think the teenage sex will dissipate, that the fast intercourse, few words and all-boy appetite will be replaced by the experienced sexuality the two of us shared before the cancer treatment. Three years after the brain injury, it still isn’t possible for him to ask for what he wants, or conduct a conversation, or remember the ways my body responds. And that’s not even important, because we’re in survival mode, trying to get our children through college, and help him relearn his career, and sell the house, and apply for disability. My husband suffers both long-term and short-term memory loss, making remembering arduous. Still, the brain changes have made his desire immense. He artlessly reaches for me, his man-hands grasp my breasts before an exchange of words, glances, clinches. Even though I’m angry at what’s happened to us, I cannot ignore his longing.

I show him simple things – kissing, touching, the mechanics of moving the body. Flirting will come much later, when he has grown a sense of self-awareness. I demonstrate affection: compliments, rapport, embraces, caresses, calls, catcalls, the French kiss. Every suggestion, forgotten. Every action, forgotten. In order to adopt the behavior, he must be reminded. Not dozens of times. Thousands of times. I must learn to respond with compassion rather than anger. This one lesson — to deliver the sweetness that is now his favorite name for me – takes five years. Two thousand days. So whose brain is injured?

For years I grieve the loss of the magnetic, loquacious expert he once was. And then I wait around a long time, in a lot of silence, to see who this new man turns out to be.

Eight years after the surgery that caused the brain injury, we’re seated on stools at the Tractor Tavern in Seattle, surrounded by beers, beards, plaids, braids, boys. I whisper his secret label, his bedtime name. His hands reach for my bottom. Squeeze. A gesture hidden and overt, the perfect flirt. We lean into each other, starry with the song and the dusk and the delight of this time. I see him as what he is: generous, gentle, forgetful and incapable of deceit.

If I silence the obsessive longing that parades like a madcap clown in my mind, he’s the perfect partner for me. He shows me that the fundamental nature of being here — on earth, in relationship, within the sexual experience — is joyful. That my sexuality can be as shameless as he lives, that we might be unfettered by what others want us to be. And how, in the midst of having anything, we don’t get to keep it. In just this way, I fall in love with him again.

Sonya Lea’s essays and interviews have appeared in Salon, The Southern Review, Brevity, Guernica, Cold Mountain Review,The Prentice Hall College Reader, The Rumpus and The Butter. Lea teaches at Hugo House in Seattle, and she’s leading a pilot project to teach writing to women veterans through the Red Badge Project. Originally from Kentucky, she currently lives in Seattle, Washington. Find her at www.wonderingwhoyouare.com.