How the Stasi spied without social media 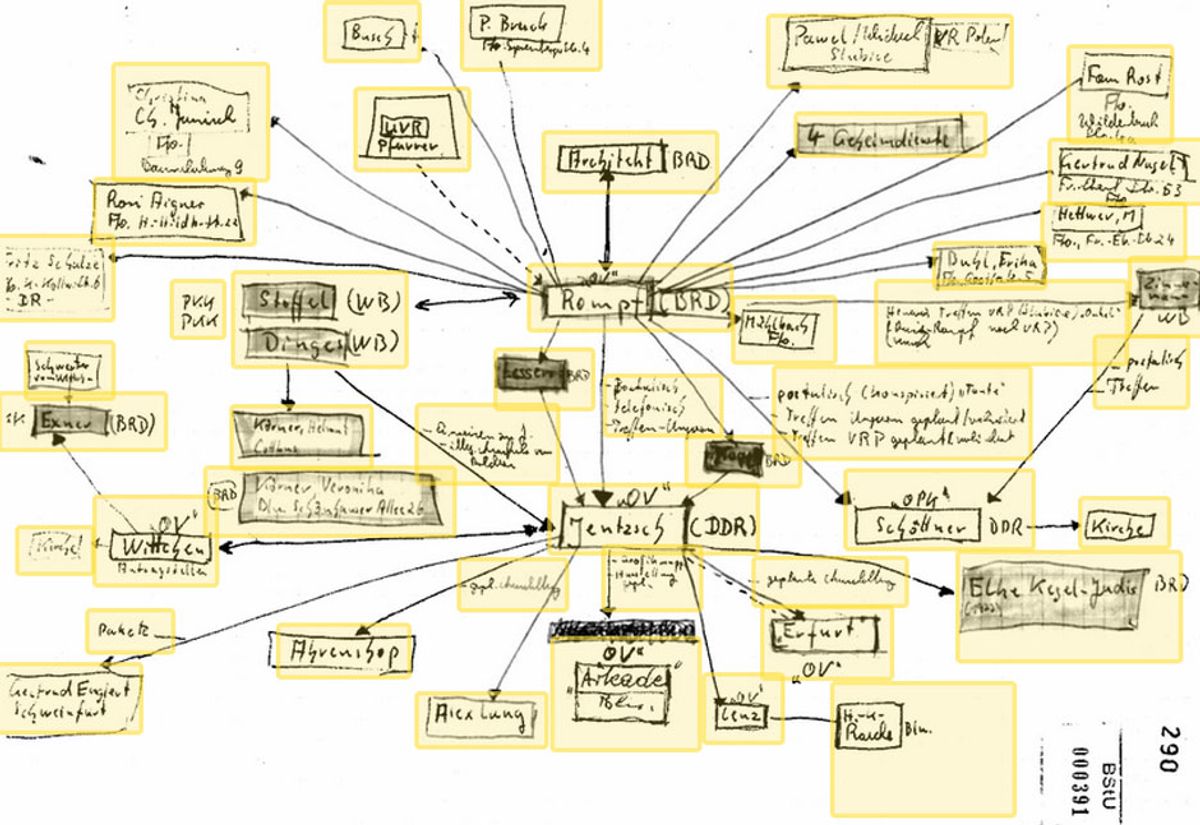 The East German secret police, known as the Stasi, were an infamously intrusive secret police force. They amassed dossiers on about one quarter of the population of the country during the Communist regime.

But their spycraft — while incredibly invasive — was also technologically primitive by today’s standards.  While researching my book Dragnet Nation, I obtained the above hand drawn social network graph and other files from the Stasi Archive in Berlin, where German citizens can see files kept about them and media can access some files, with the names of the people who were monitored removed.

The graphic appears to show forty-six connections, linking a target to various people (an “aunt,” “Operational Case Jentzsch,” presumably Bernd Jentzsch, an East German poet who defected to the West in 1976), places (“church”), and meetings (“by post, by phone, meeting in Hungary”).

Gary Bruce, an associate professor of history at the University of Waterloo and the author of “The Firm: The Inside Story of the Stasi,” helped me decode the graphic and other files. I was surprised at how crude the surveillance was. “Their main surveillance technology was mail, telephone, and informants,” Bruce said.

Another file revealed a low-level surveillance operation called an im-forgang aimed at recruiting an unnamed target to become an informant. (The names of the targets were redacted; the names of the Stasi agents and informants were not.) In this case, the Stasi watched a rather boring high school student who lived with his mother and sister in a run-of-the-mill apartment. The Stasi obtained a report on him from the principal of his school and from a club where he was a member. But they didn’t have much on him — I’ve seen Facebook profiles with far more information.

A third file documented a surveillance operation known as an OPK, for Operative Personenkontrolle, of a man who was writing oppositional poetry. The Stasi deployed three informants against him but did not steam open his mail or listen to his phone calls. The regime collapsed before the Stasi could do anything further.

I also obtained a file that contained an “observation report,” in which Stasi agents recorded the movements of a forty-year-old man for two days — September 28 and 29, 1979. They watched him as he dropped off his laundry, loaded up his car with rolls of wallpaper, and drove a child in a car “obeying the speed limit,” stopping for gas and delivering the wallpaper to an apartment building. The Stasi continued to follow the car as a woman drove the child back to Berlin.

The Stasi agent appears to have started following the target at 4:15 p.m. on a Friday evening. At 9:38 p.m., the target went into his apartment and turned out the lights. The agent stayed all night and handed over surveillance to another agent at 7:00 a.m. Saturday morning. That agent appears to have followed the target until 10:00 p.m. From today’s perspective, this seems like a lot of work for very little information.

And yet, the Stasi files are an important reminder of what a repressive regime can do with so little information. Here are the files.