If it's Sunday, it's the overwhelming consensus of the scientific community being treated as a partisan argument 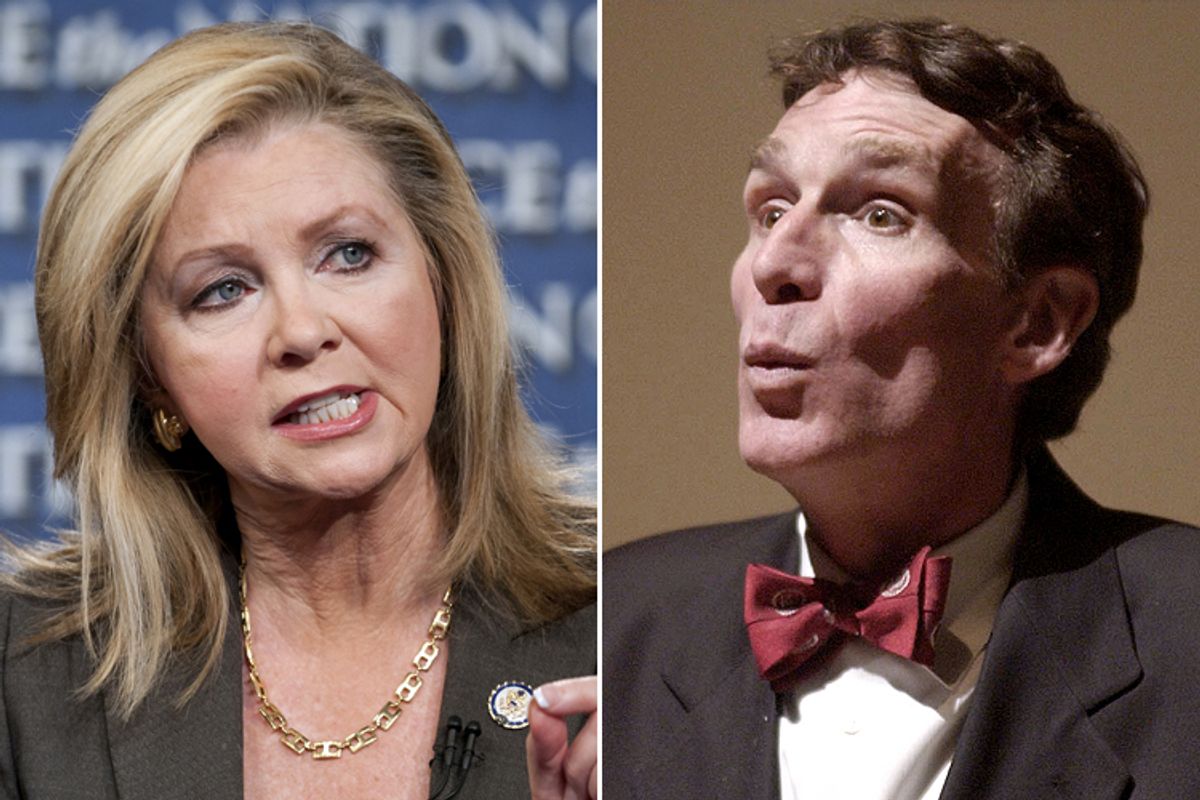 This Sunday, "Meet the Press," the renowned televised political news forum, will host a discussion of climate change -- perhaps the single most pressing issue of our time -- featuring a professional children's entertainer and a Republican member of Congress. Yes, David Gregory will be refereeing a "debate" -- their word -- between "Bill Nye 'The Science Guy' and Tennessee Republican Congresswoman Marsha Blackburn, Vice Chair of the House Energy and Commerce Committee." Nye will be arguing the pro (climate change is real and bad) and Blackburn will be arguing the anti (climate change is made up and not bad). By the end, America will be just a little bit more stupid and doomed.

Apparently they could not find an actual climate scientist to argue for climate science. It is not particularly surprising that they could not find one to argue against the reality of carbon emissions-driven global warming, but it still seems a bit of an unfair difference in stature to have the position backed up by corporate-sponsored pseudoscience be represented by a member of Congress, against a man known primarily for shouting "science!" while wearing a bow tie and explaining dinosaurs to daytime public television viewers. Was Thomas Dolby unavailable?

I intend no disrespect to Mr. Nye, who is a smart and dedicated evangelist for science and advocate for action to address carbon emissions. But Bill Nye is not actually a climate scientist. He is a former mechanical engineer turned television entertainer, and now professional edu-tainer. He's clearly well-informed on the subject of climate science, and he has done quite a lot to popularize and explain the research. Against very well-funded opponents, he has long been a prominent voice for scientific literacy. I have no doubt that Bill Nye could out-debate Marsha Blackburn -- or indeed pretty much any Republican elected official -- on the subject of humanity's responsibility for climate change and its probably catastrophic effects.

What's insulting (and insane) is that there is to be a "debate" at all, on one of America's supposed premier news talk shows. What's scary is that the side of this debate that is wrong, and that is wrong in a way that will very probably lead to worldwide disaster in a few generations, is taken seriously because it is the side taken by one of America's two dominant political parties.

Despite the imprimatur of the GOP, "Meet the Press" is responsible for taking the anti-science side seriously enough to present it as a legitimate and defensible view. Unfortunately, "Meet the Press" cannot deal with any issue without framing it as a binary debate between two opposing partisans, with the assumption being that "the truth" lies directly between their views. The fact that, in this debate, the entertainer represents the "side" of the overwhelming scientific consensus is less important to the producers of "Meet the Press" than the fact that one "side" is also the consensus of the Democratic Party, while the view of a small fringe in the scientific community is the official position of the Republican Party. The political debate apparently trumps any responsibility the program might feel to present to its viewers an accurate picture of the debate, or non-debate, over anthropogenic global warming among actual climate scientists.

I predict with absolute certainty that one of Gregory's questions to Nye will be some variation on "How can there be global warming if it just snowed a bunch?"