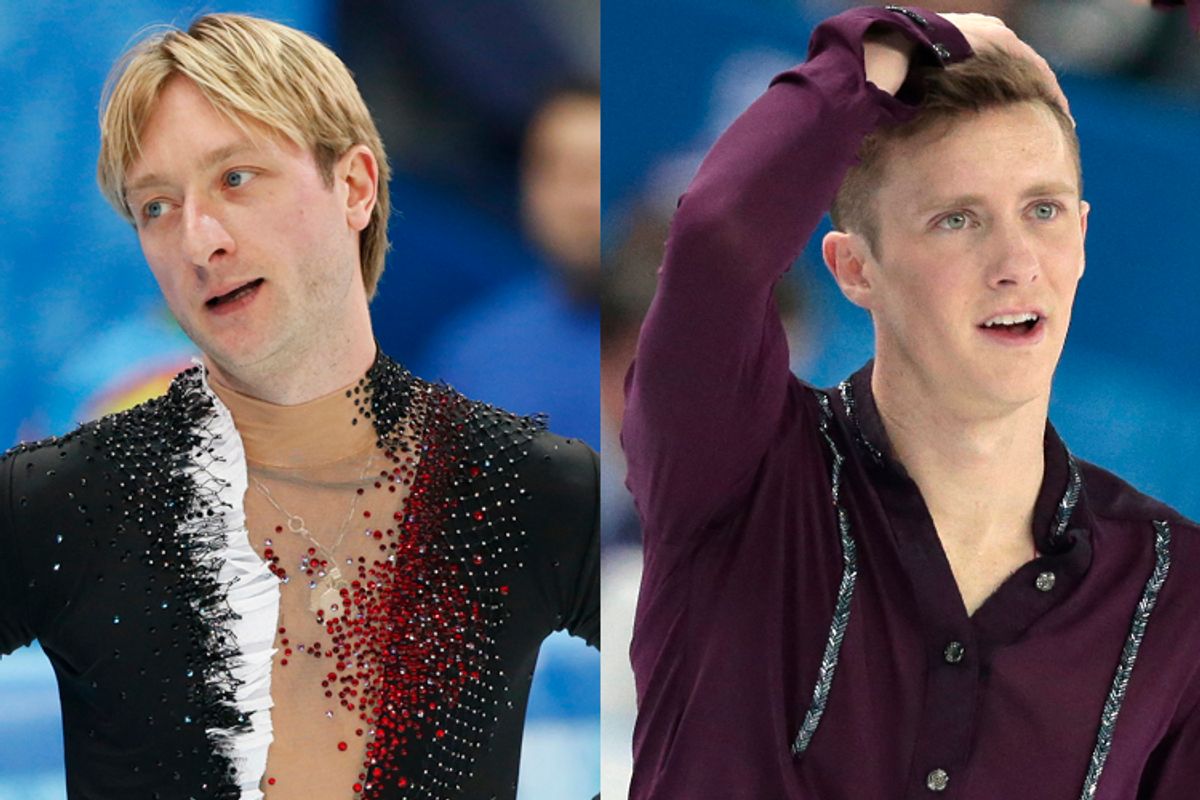 We all stumble in life. We all lose. It's how we pick ourselves up from defeat and disappointment that matters. Isn't that what we watch the Olympics for – to see that in action, to learn that lesson, again and again?

In Sochi Thursday, Japan’s Yuzuru Hanyu made history with a record-setting performance in the men's short figure skating program. With a score of 101.45, he became the first person to crack triple digits from the judges. It was a brilliant performance from the 19-year-old, a star-making display of technical excellence that wowed the international audience and hinted at what might be to come in the long program.

But the men who will not be collecting medals wound up being the day's most memorable figures. There was four-time defending U.S. champion Jeremy Abbott,  who took a spill during an attempted quadruple toe loop, pitching forward and careening into the rink wall in a massive wipeout. For a moment, he looked dazed. And then, as the crowd cheered him on and clapped, he got on his feet and finished his routine. He ended the routine in 15th place – and with a wide, humbled and grateful smile on his face.

And Abbott wasn't the only contender who had to watch his dreams take a very different turn. Evgeni Plushenko, the 31-year-old former gold and silver medalist, had to bow out of his fourth Olympics shortly before what was to be his turn on the ice. Plushenko, who's endured multiple injuries and surgeries, had faltered during the warmup, wincing and clutching his back. Just days earlier, he'd performed dazzlingly, coming in second in the team short program and first in the free skate and helping Russia win its first gold of the games. But by Thursday, the pain had become unsustainable. He later told reporters, "Today in the morning, I can't jump … but I said to myself, 'Evgeni, you must skate. You must. You need two more days, the short and the long program. And I came on the warmup and … I felt it, like knife in the back."

After a career that puts him in the realm of true legends, Plushenko did not leave the ice with a smile Thursday. He left it looking heartbroken and pained. But even in the midst of crushing disappointment, he was able to be philosophical, even gracious. "I think it's God saying, 'Evgeni, enough," he said Thursday. "Enough to skate. You did a lot of figure skating." Jeremy Abbott, meanwhile, also had a lesson to impart on Thursday. After his performance, he declared, "I think my personal story has been about perseverance and always getting up when you fall. So maybe I’m not Olympic champion, but if nothing else, I can teach the world that." The thrill of victory is a rare event. But if you're fortunate, you learn about what some call the difference between courage and acceptance, about when to be Abbott and when to be Plushenko. Failure sucks, but it teaches us things victory rarely does. Sometimes, after you stumble, you keep skating. Sometimes, you have to let it go. What matters most is that you keep getting up.