Yes, "House of Cards" is our Shakespeare

Comparing the show to Shakespeare isn't pretentious; it's appropriate 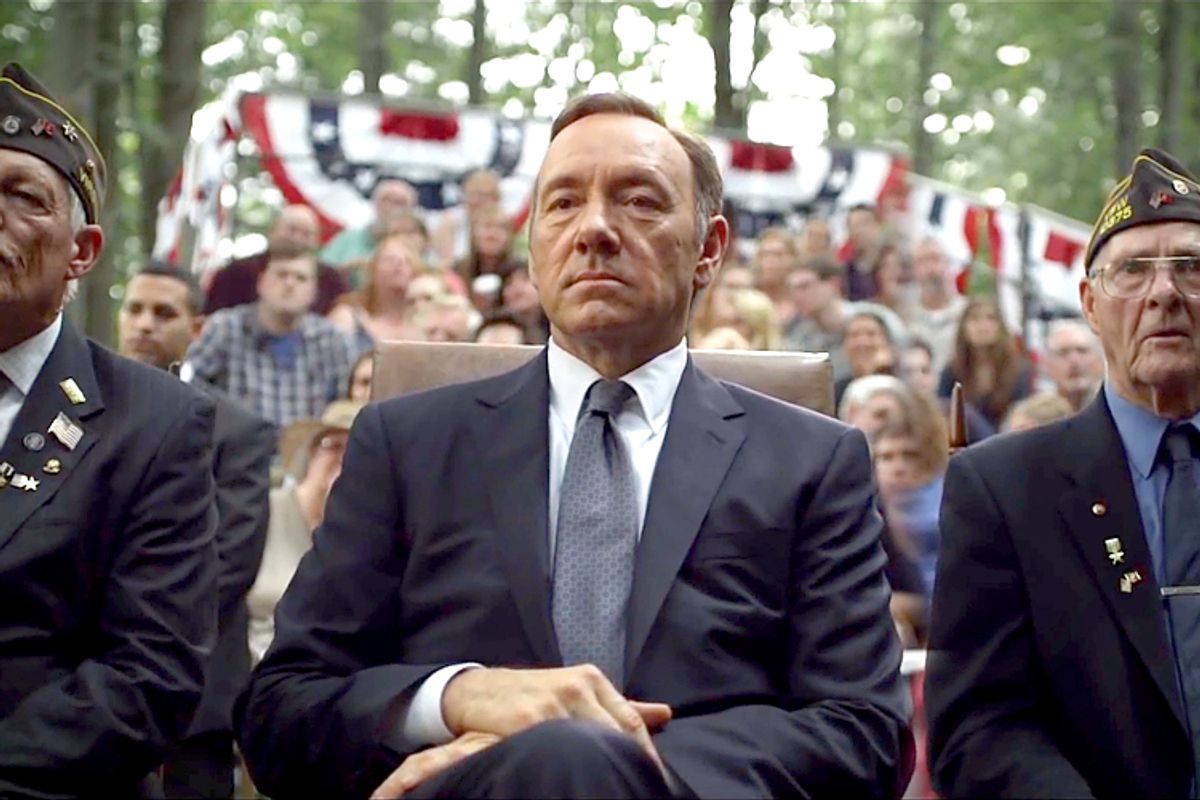 "The way it was displayed to us, long before Episode 1 was ever written in Season 1, was you are Lady Macbeth to his Richard III."

That was "House of Cards" star Robin Wright, using English-major references to describe her TV series -- and her relationship, therein, to the Kevin Spacey character -- at a recent roundtable discussion with journalists. These sort of comparisons are as old as the "Cards" franchise itself, which began its life as a British TV series later adapted for Netflix. Spacey, who played Richard III in 2011 and 2012, has asserted that the show's central device (not original to the American version) was a direct crib from Shakespeare's play.

Molly Parker, who plays a newly introduced member of Congress in the second season, said at the roundtable that "my sense is that this show’s sort of Shakespearean in its scope and has that sort of 'Richard III' -- those themes in 'Macbeth,' even."

This seems, on its face, risible. "House of Cards" has been nominated for Emmys and Golden Globes, sure, but comparing it to the most enduring art in the Western canon is as overzealous as comparing "The Wire" to a novel by Charles Dickens -- which happens constantly, too.

"House of Cards" is small-bore, in a sense: It shows us the machinations of politics, but no one ever senses that the nation will be meaningfully different if whatever it is Frank Underwood has set his mind to comes to pass, not least because his political positions seem largely contingent on preserving his power. Negotiations with teachers' unions and dealings with state governments flit by as minor elements of the plot, which shows us power's effect on the soul, but not, precisely, what power can accomplish.

But doesn't that fit the times, in a certain spiritual sense? Viewed years from now, "House of Cards" may look like a history play about our era's utter disconnect between government and citizenry. Its flaws -- the degree to which, for a show about politics, the politics themselves are pretty unreal -- may indeed be assets in depicting the national level of confidence in government. "That kind of power is so transparent and it’s very Shakespearean and it’s about greed," Wright had said, of political power; indeed, the show gets at power by depicting not its effect on a nation but its effect on a single person. Perhaps, like Shakespeare, the writers of "House of Cards" have captured their times in a manner that future generations might study.

And the corroded soul at the show's center is, if not quite worthy of Shakespeare, not derivative of it, either. There's something at play here that the Bard might recognize. Frank Underwood's character is a broad archetype who doesn't really change but is complicated over the length of the show's run through new information revealed in direct address to the audience. But Richard III, a Machiavellian plotter, isn't the only archetype in Shakespeare's work. Portia is good to the core. Romeo is lovelorn and dramatic. Hamlet is indecisive. Shakespeare was a master of characterizations because he was the first to delve so deeply, but the broad types he used look familiar when one views the purely manipulative and power-hungry Frank Underwood, and the purely good, simple folks he runs over.

In Shakespeare's day, his work was popular art as well as the most sophisticated game in town. "House of Cards" isn't doing the work of inventing the modern conception of humanity that Shakespeare did. But that can only be done once. In this popular art, at which bouquets or tomatoes will be tossed on Twitter, we get at a few obvious and elemental truths through a complex, twisting plot designed to keep the audience in their seats for as long as possible. The language has changed, but the method -- getting at the broad through specific personality types -- hasn't changed much. Comparing "House of Cards" to Shakespeare isn't pretentious; indeed, we ought to be comparing more things to Shakespeare. If the Bard's work is so great, we ought to be looking for the man's fingerprints everywhere, and rejoicing when he helps deepen our understanding of why a TV show is so engaging that we'd sacrifice a long weekend to binge.