Tea Party battles the 1 percent: How a Christie '16 campaign could break the GOP

If he runs for president, Chris Christie will spark an all-out war for control of the Republicans. It will be ugly 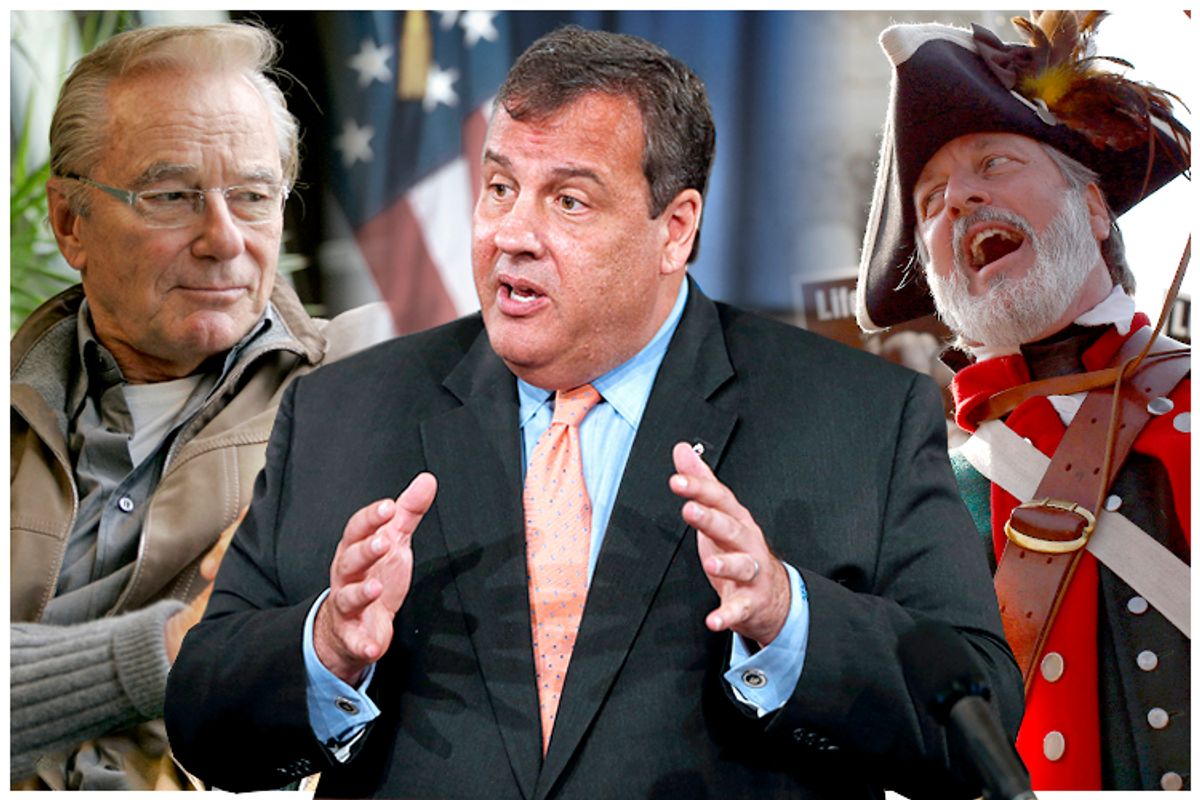 It’s been more than a month since “Time for some traffic problems in Fort Lee” completely destabilized American politics and transformed New Jersey Gov. Chris Christie from the GOP’s 2016 front-runner into something more akin to a victim of radiation, someone other Republicans hope to avoid lest they too become contaminated. In the time that’s passed, we haven’t yet learned much about what really happened at the George Washington Bridge — or in the city of Hoboken — but we have learned this: Despite the scandals ongoing as well as those potentially to come, Christie is still running (unofficially) for president.

You’d suspect that a man of Christie’s ego and ambition wouldn’t give up on his dream of ultimate power until the odds were truly insurmountable, and Christie confirmed this suspicion when he appeared at the Economic Club of Chicago on Tuesday to fundraise for the Republican Governors Association and talk about the issues of the day. Before a large audience of Chicago’s richest “who’s who,” Christie spoke like a man who planned to reassure his nervous wealthy backers and reassert himself as the establishment’s favorite for the GOP’s next presidential nomination.

“You want income equality?” Christie pretended to say to Elizabeth Warren and Bill de Blasio, two of the 1 percent’s most-hated politicians. “That is mediocrity. Everybody can have an equal, mediocre salary.” Having established his class-war bona fides, Christie went on to implicitly address his audience’s concerns over his wavering electability, noting that Bill Clinton “was far from the perfect candidate” and insisting that despite the Tea Party’s well-established antipathy for him, they’d ultimately accept him as their nominee. “Parties tend to become pragmatic when they are powerless,” Christie said. “It’s time for us to get pragmatic.”

Christie even threw in an appreciative nod toward former President George W. Bush — who remains anathema to the public at large while still being a hero to many members of the establishment — saying the 43rd president was “grossly underappreciated” during his tenure and remains so still.

As far as Republican elites were concerned, it was a bravura performance, so masterly that on “Morning Joe” the next day, former Bush spinmeister Nicolle Wallace reprimanded Chuck Todd for having the temerity to deny Christie had had “a pretty good day.” Christie, according to Wallace, had spoken “eloquently about income inequality” and continued to be “more focused on his day ob” than any other major politician despite “formerly objective members of the political press … coming after him.” Wallace, who knows a thing or two about working the refs for a Republican presidential campaign, said Todd’s behavior was a testament to “the climate [Christie would] face should he run for president.”

Yet Christie’s decision to celebrate Bush wasn’t simply an attempt to win over the GOP elite. They never really abandoned him, as his continued record-setting fundraising should attest. Rather than a play to win over the Republican upper crust, Christie’s recognition of Bush was an implicit signal that when it comes to the ongoing power struggle between the Tea Party and the establishment that’s roiling the GOP, Christie, already closely associated with the party’s wealthy wise men, was going all-in and banking on their support. Not just to get him through his current troubles, but to supply him with the kind of overwhelming financial firepower he’ll need to overcome Tea Party resistance during the upcoming presidential primary.

Although Bush is still well-regarded by Republicans in the aggregate, Christie’s choice to associate himself with the last GOP president was a not-so-subtle rebuke of one of the Tea Party’s foundational myths: That W. betrayed “true conservative principles” during his presidency, forcing exasperated right-wingers across the country to form a de facto third party and make the Republican establishment return the GOP to its small-government roots. Just as positively citing Robespierre is a signal of leftist tribal loyalty in the politics of France, treating Bush as something other than an embarrassment to be repudiated is a declaration of establishment tribal loyalty in the fractious politics of today’s GOP.

In fact, if we assume that Christie somehow makes it through his current tribulations without resigning or becoming so toxic that a presidential run is out of the question — an admittedly big assumption! — his 2016 campaign now becomes something more than just one man’s bid for power. For while it’s true that Christie’s downfall has caused some ultra-conservatives, who see liberal media bias everywhere, to cut him a little slack, the most salient fact about the relationship between the Tea Party and Christie is still this: They don’t want him as the 2016 Republican nominee. For proof, look no further than a recent “semi-scientific” presidential poll of 60,000 right-wing activists. Among more than a dozen contenders, where’d Christie place? Dead last.

To some degree, a Christie presidential run was always going to be a fight between the GOP’s rank-and-file and its moneymen. With the notable exception of George W. Bush, who managed to unite both wings of the party and rapidly secure the nomination in 2000 (a triumph Christie once hoped to repeat), that’s been a part of nearly every GOP presidential primary of the modern era, going all the way back to the fight in the 1950s between Eisenhower and Taft. What could make a Christie campaign more of a total war than usual, however, is the fact that, for the first time in a while, the establishment’s go-to argument in favor of its chosen candidate — electability — doesn’t hold water. Christie used to run neck-and-neck with Hillary Clinton in (absurdly premature) presidential polling for 2016; now he’s 20-plus points behind.

As I said earlier, Christie’s mentioning Bill Clinton in Chicago was an unspoken recognition of his predicament as well as an attempt to persuade his backers that he still remained the most electable member of the GOP’s 2016 field. If the primary lineup looked anything like the horror show that was 2012, in which Mitt Romney won essentially by default and even struggled to put away surefire losers like Newt Gingrich and Rick Santorum, Christie might have a point. But 2016 is almost certain to be different, with a much better array of options for Republicans to choose from. Marco Rubio, Scott Walker, Jeb Bush, Paul Ryan, Susana Martinez — any of these politicians could reasonably be seen as acceptable to the establishment, and all of them carry less Tea Party antipathy with them than does Christie.

The only explanation, then, for why the establishment would still support Jersey’s nominal boss (there’s only one true Boss, and he’s not a fan of Christie) would simply be that they love the guy to a degree that’s no more rational than the Tea Party’s affection for dead-enders like Ted Cruz or Rand Paul. And along with Christie’s so far unmarred ability to persuade the establishment to keep forking over cash — evidenced most clearly by the big hauls he keeps bringing in as chairman of the RGA — there is reason to believe that the big spenders of the GOP will stand by their man. As the New Republic’s Alec MacGillis and Noam Scheiber have argued, the 1 percent, despite its reputation of being composed of the most rational and analytical minds in the world, is embarrassingly naive about American politics.

As one anonymous source told MacGillis, the 1 percent subscribes to the “great man theory of history,” believing that everything wrong with American politics can be set right just so long as we elect a leader with the vision and fortitude to enact change through the sheer power of his will. “They believed Obama was a great man,” the source continued, “and — lo and behold — Washington is a complicated place, and they blame it all on him, and now they believe it’s going to be a former prosecutor who’s going to solve all their dreams.” Christie once masterfully capitalized on this adolescent understanding of politics, presenting himself as a bulldozer who would plow through Washington’s myriad obstacles in exactly the same way he did in Trenton. Whether he can maintain this shared fantasy after Bridgegate is unknown, but so long as he’s not directly implicated, it’s certainly possible.

If Christie somehow manages to win the nomination, despite the Tea Party’s resistance and despite his now-questionable electability, it won’t tell us much about the man that we don’t already know: That he’s blessed with an impenetrable self-confidence and a voracious ambition, that he’s a supremely gifted manipulator of the vanities and prejudices of the right-wing segment of the nation’s ruling class. But it’ll tell us something. Primarily, we’ll see that the narrative of a Tea Party-run GOP has little more to do with reality than the “great man” theory of politics, and that the party remains, as it has always been, the property of the propertied. We’ll see, in short, that the Republican 1 percent gets what it wants, no matter what.

And to think this all started with one simple little email: “Time for some traffic problems in Fort Lee.”