"Winter's Tale" and America's tortured quest for the divine 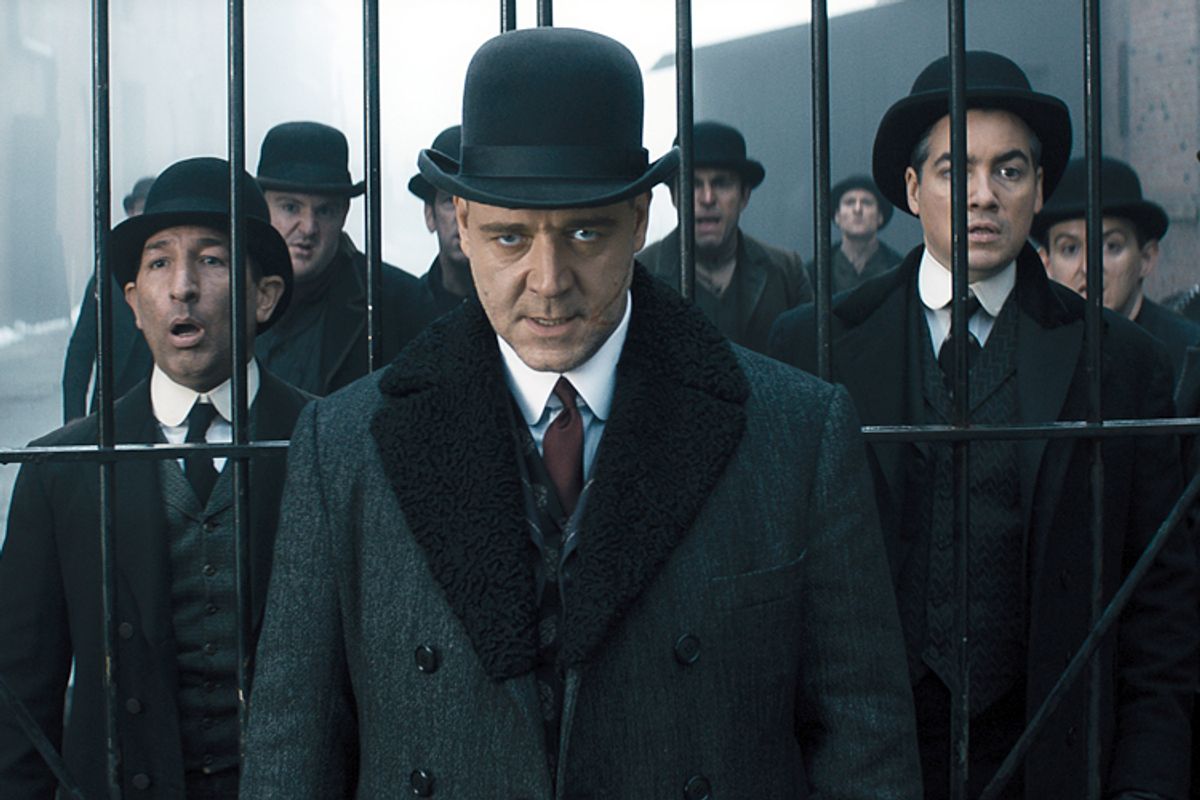 When I ask myself why Akiva Goldsman’s ridiculous spiritual fable “Winter’s Tale” amused me, troubled me and fascinated me so much, I need to go a little deeper than the fact that it’s one of the weirdest Hollywood movies of recent years. It’s also a quasi-religious film arriving at a quasi-religious moment in American cultural history, one that self-consciously engages with our nation’s long-standing relationship with the divine and reflects, in all too literal-minded a fashion, what the Pew Forum on Religion & Public Life has described as the “very diverse and extremely fluid” character of American religious belief. Like Darren Aronofsky’s forthcoming epic “Noah” and Mark Burnett’s Jesus biopic “Son of God,” “Winter’s Tale” is calibrated to appeal both to orthodox believers and to at least some secular-minded viewers, especially that growing proportion who don’t consider themselves atheists or agnostics but are not affiliated with any religious denomination.

All these movies, and others to come, are landing in a climate when the discussion about the role of religion in American life is both heated and intensely confused. We argue about whether or not the United States is in some sense a “Christian nation,” and to be frank, both sides have a point. As good liberals all know, God is never mentioned in the Constitution (and only indirectly in the Declaration of Independence), and the Founding Fathers skewed toward a deistic and pluralistic version of Protestant Christianity that has since slid into deep recession. But it does no one any good to deny that the original American colonies had a strongly religious character, or that the Puritan fundamentalism that drove the Massachusetts Bay Colony — “a City upon a hill,” as John Winthrop wrote before he even got there — remains a central force in American culture.

Then we have the accusatory debates between the so-called New Atheists and their opponents (a long-running feature of this publication!), who seem eager to outdo each other in sanctimony. Of course atheists are right that they’ve often been exiled from American public life, or treated like pariahs on the idiotic assumption that you can’t believe in morality if you don’t believe in God. But despite the prominence of a handful of atheist intellectuals like Richard Dawkins or the late Christopher Hitchens, it’s startling to realize that outright nonbelievers remain a tiny minority, well into the 21st century. In the most recent Pew survey of religious belief, only 1.6 percent of responders called themselves atheists, which is almost exactly the same as the proportion of Jews or Mormons. Professed agnostics make up a slightly larger group, at 2.4 percent, and then we get to that growing religious-but-unaffiliated chunk of the population I mentioned above — around one person in eight — whom the Pew survey identifies as “nothing in particular.”

“Winter’s Tale” is a spiritual journey for the “nothing in particular” set, and while I know how snide that sounds I don’t entirely mean it that way. I found Goldsman’s adaptation of the 1983 bestseller by Mark Helprin both attractive and repulsive, sometimes at the same moment. It invokes vomit-inducing New Age spiritual clichés within its first 10 seconds, when a plummy-voiced English female narrator asks us whether the stars we see in the sky might not be, rather than the distant astronomical fireballs postulated by boring science, the wing-traces of people who’ve ascended as angels. (Or something like that.) Things only get better from there! This is a movie with a flying horse (named Horse), a beautiful doomed princess so feverish with consumption that her bare feet can melt snow (both the narrator and the doomed princess are Jessica Brown Findlay of “Downton Abbey”), Colin Farrell living forever with a New Romantic mid-‘80s haircut, and Russell Crowe, in a bowler hat and a stage-Irish accent, playing the Chief Demon of New York City. And I bet I’m not supposed to tell you about the major movie star who shows up in a cameo role as a certain fallen angel, the Father of Lies and the Great Seducer of mankind.

Clumsy and kitschy as “Winter’s Tale” often is, there’s no denying that it feels like a profoundly and perhaps painfully personal film, in a way Hollywood movies almost never do. (As to the title: There are a few tenuous thematic connections to the strange and terrific Shakespeare play, but nothing worth discussing.) There’s a desperate earnestness about its quest for both spiritual meaning and old-fashioned romance, its determination to be “the kind of movie they don’t make anymore,” although in this case nobody ever did. Goldsman, a longtime screenwriter and producer who won an Oscar in 2002 for the screenplay to “A Beautiful Mind,” has evidently been trying to get this picture made for years, and has said that a personal loss in his own life drove him to pursue it even more fervently. (Wikipedia informs me that Goldsman’s wife died unexpectedly in 2010.) I’ve never read Helprin’s novel, which runs almost 700 pages, but it’s clear from reading a plot synopsis that Goldsman has pushed the adaptation pretty far in his own direction. What we see here is an unstable concoction that feels like “Cloud Atlas” mixed with “Les Misérables,” as re-imagined by Dan Brown (indeed, Goldsman wrote the screenplays for both “The Da Vinci Code” and “Angels & Demons”).

All those factors make me want to resist mockery, at least a little bit, especially since other critics and the marketplace will likely take care of that. There is no doubt an audience for what Goldsman is preaching, and “Winter’s Tale” already has its defenders, who may variously urge us to be less cynical, to recall the wonder of fairy tales, to permit ourselves to believe in magic. Well, I’m fine with fairy tales; make ‘em as magical as you like. And I have no problem with a narrative universe in which God and the devil do battle for men’s souls, metaphorically or otherwise. But this movie’s ache to believe in something, indeed in almost anything — in a highly sentimental and miraculous storybook teleology unhitched to any recognizable religious tradition — is so naked as to be embarrassing. It’s a short aesthetic and conceptual hop from the mawkish spirituality of “Winter’s Tale” to that found in the books about angels sold at big-box stores, to greeting cards depicting your forthcoming reunion with your dead hamster in heaven, or indeed to “Heaven Is for Real” (which will also be a movie soon).

While this is a vaguely Judeo-Christian realm, it carefully avoids ever being specifically Jewish or Christian, and God is conspicuous by his absence. (While Goldsman is clearly Jewish by heritage, as is Mark Helprin, I don’t know anything about either man’s personal beliefs.) The Other Guy, on the other hand, makes several appearances and is quite the cut-up: It’s the problem of Milton’s “Paradise Lost” all over again, but without the great poem! Goldsman appears to use the consequence-free zone of magical realism to abandon any pretense of narrative logic. Farrell’s character, an early-20th-century foundling abandoned in New York Harbor and raised on the streets of Brooklyn, speaks with an Irish accent; when we jump forward 100 years (because Farrell has been transformed into an ageless immortal by Miss Consumptive Hotfoot Princess, who loved him truly, madly and deeply), one of the supporting characters from 1914 is not merely still alive but still working in journalism. Maybe some of his immortality rubbed off on her? I really don’t know. Every time we see the Hudson River it’s frozen absolutely solid, which either means that Goldsman is a climate-change denier or a big fan of “The Dark Knight Rises.”

But my real problem with “Winter’s Tale” is not that it feels like an overpriced vanity project in which a well-connected Hollywood insider with lots of celebrity friends seeks to soothe his private grief. That’s actually what seems peculiar and individual and redemptive about it. My problem is both personal and philosophical: Like many people I know, I belong to that fast-rising “nothing in particular” demographic. I don’t really qualify as an atheist, but I have a difficult time conceiving of any sort of personal deity and do not belong to any church. To speak frankly, I am somewhat susceptible to a version of what Goldsman is peddling here, to vague teleological notions that there may be patterns at work in the universe we cannot perceive or cannot understand. Indeed, that strikes me as the characteristic faith-as-doubt or doubt-as-faith of our age, reflecting a chaotic diversity that stretches from Zen as practiced by non-Buddhists to Teilhard de Chardin as read by non-Catholics to esoteric cosmological ideas about string theory, brane theory and the multiverse.

But I'm also aware (as you may be) that those ideas can easily slide into an incoherent and superstitious worldview, into anti-scientific prejudice or a philosophical copout that tries to split the difference between the demands and traditions of religion and straightforward non-belief. I do seek comfort in the ineffable and the inexpressible, in mysteries we will never solve. But I'm pretty sure I don't want them spelled out for me by a dying princess with radioactive feet who claims that the universe loves us all equally. (It expresses that love quite differently on a case-by-case basis, it seems.) And if we must have a roguish Irish thief made immortal by love, can't he come up with a better name for his magical flying horse?